Burr is an undesirable phenomenon occurring in drilling operation which is one of the essential operations in the machining industry since it is directly influencing the operating costs. Exit burr height (EBH) values as the function of drilling time during drilling the specific holes of the forging brass workpieces used for producing the water-valve components with the uncoated- tungsten carbide (WC) and the AlCrN coated-WC drills were discussed. The data sets of drilling time, corresponding to EBH values at the appropriate criterion were used to develop the tool life models in terms of cutting speed and feed rate using Taylor’s equation. Monte Carlo simulation was adopted to study the uncertainty of cutting speed and feed rate on tool life predictions for sensitivity analysis. The results showed that drilling with a low feed rate decreased the averages of EBH. The predicted tool life values of the AlCrN coated-WC drills were higher than those of the uncoated-WC ones based on the results of tool life predictions. The appropriate operating condition of the cutting speed of 60 m/min and the feed rate of 0.2 mm/rev was recommended for manufacturers in the drilling of the forging brass workpieces using the AlCrN coated-WC drills. Moreover, the predicted tool life values for the uncoated-WC and the AlCrN coated-WC drills were about 600 and 800 min, respectively. This indicated that the AlCrN coated-WC drill increased tool life by 30%.
Keywords: drilling; tool life; burr height; Taylor’s model; Monte Carlo drilling; tool life; burr height; Taylor’s model; Monte Carlo

Tool life is very important in the machining industry to improve the quality of a cutting tool as well as a machine component. If tool life expires, the reliability of the tool affects quality of the machined parts and productivity. It is one of the important five criteria (tool life, material remove rate, cutting forces, surface finish and chip shape) used for studying the material and cutting tool behaviours during machining [1]. The tool life model can be effectively used to predict tool wear and length of cutting time that the tool can be operated before changing a new tool. Tool life criteria have been adopted for performing tool life models. Generally, tool life criteria used in the cutting operations can be observed from failure of the tool, occurrences of maximum width of the flank wear, the depth and width of crater wear, sound of the tool, type of chip, degradation of machined surface [2].
There have been previous researches on drilling tool life based on various tool life criteria. de Paiva et al. [3] compared the performance of coatings deposited on cemented carbide drills in drilling compacted graphite iron based on tool life criterion of flank wear. They found that the Cr-based coatings (AlCrN and TiSiN/AlCrN) had better performance than other ones. Wu et al. [4] also used the flank wear of the drill cutting edge as a tool life criterion in drilling compacted graphite iron with coated carbide drill at the feed rate of 26.5 mm/s.
Burr height is another criterion used to develop a tool life model. It is noted that burr is a critical problem of various manufacturing processes, especially drilling operation which is one of the most important operations in the machining industry since it is directly influencing the operating costs. Burr significantly influences productivity. Gillespie [5] stated that burr elimination can account for 30% of the total operating cost. The deburring procedure after a drilling operation of thousands drilled holes requires a tremendous operating cost to various industries [6]. Drilling operation accounts for approximately 33% of all cutting operations [7]. Consequently, machined part should be used without the process of deburring. Costa et al. [8] used the burr height of the drill coated with TiAlN as the criterion in drilling of the steel DIN 38MnS6 with two cutting speeds (45, 60 m/min). They used the average burr height as a function of the drill life levels (in percentage). They found that the average burr height increased with the wear of the drills. The average burr heights for the cutting speed of 45 m/min were twice than those for the cutting speed of 60 m/min.
Some researchers have applied Taylor’s equation for the tool life modelling of drilling tools to investigate the effect of drilling parameters on drilled holes. Lukic and Djapic [9] proposed a model relationship between cutting speed and tool life for optimization of the cutting parameter in drilling of various workpieces based on Taylor’s extended equation. Shen et al. [10] developed the tool life of spade drills in drilling of ductile materials by varying cutting speeds, feed rates and drill point angles. They showed that the extended Taylor’s equation could be used to predict qualitatively and quantitatively the tool life of spade drills with variations of drilling parameters and drill geometry. Astakhov et al. [11] proposed the logarithmic coordinate transformations of the regression equation to investigate the effect of cutting speed, feed rate and cutting fluid flow rate on the drilled holes roughness and roundness, the tool life and the cutting force in deep holes drilling. However, there has been no previous study regarding tool life modelling using Taylor’s equation with the burr height criterion in drilling of forging brass.
Timata and Saikaew [12] attempted to systematically investigate the effect of different spindle speeds and feed rates on EBH and drilled diameter during drilling of forging yellow brass with the special uncoated carbide drill. It was found that spindle speed and feed rate on the exit burr height (EBH) and drilled diameter were statistically significant at the level of significance of 0.05. In addition, the appropriate operating condition of the drilling parameters was obtained based on the results of analysis of variance and response surface methodology. In this work, CNC drilling machine was employed to carry out the experiments under dry condition for making the specific hole of the forging brass workpieces for producing the water-valve components using the uncoated-WC and the AlCrN coated-WC drills. It is noted that AlCrN was considered to be an alternative coating material for drilling tools due to its excellent properties such as low thermal conductivity, better abrasive wear resistance, low friction coefficient, high hardness, elastic modulus, H/E ratio, and bonding condition between coating and the unique carbide substrate [13,14,15]. Tool life models of both drills were developed in terms of cutting speed and feed rate using Taylor’s equation with a maximum EBH value of 0.16 mm for the tool life criterion based on manufacturer’s specifications and customer’s requirement. In addition, Monte Carlo simulation was used to investigate the influence of cutting speed and feed rate on tool life predictions for sensitivity analysis and studying the uncertainty of drilling factors on EBH and tool life. Hence, the novel research contributed to the systematic understanding of the sensitivities of tool life predictions for uncertainty assessment of the drilling factors within the 95% confidence interval due to the inherent variation of the drilling process. Only a few experimental runs were required to formulate the tool life model. Furthermore, this study was simplified by the fact that the running time for the Monte Carlo simulation was less time consuming using the Minitab® software.

Tool life modelling based on Taylor’s equation and Monte Carlo simulation technique has been successfully employed to investigate the effect and uncertainty of cutting speed and feed rate on averages EBH and tool life predictions while drilling of forging brass workpieces with the uncoated-WC and AlCrN coated-WC drills. The conclusions could be drawn as follows:
Although using coated-WC drills can reduce burr height and increase tool life, drilling tool design can reduce burr height and prolong tool life leading to quality of drilled workpieces and productivity improvement. Sugita et al. [40] proposed a dedicated drill design of tool shape and nicked shape to reduce burr height and delamination and to increase the accuracy drilled holes during the drilling of composite materials. Hence, further research should be focused on tool design for burr height reduction and quality improvement of the drilling process for forging brass.

This research was funded by the Faculty of Engineering, Khon Kaen University.

The authors gratefully acknowledge the Faculty of Engineering, Khon Kaen University for the financial supports of this research. 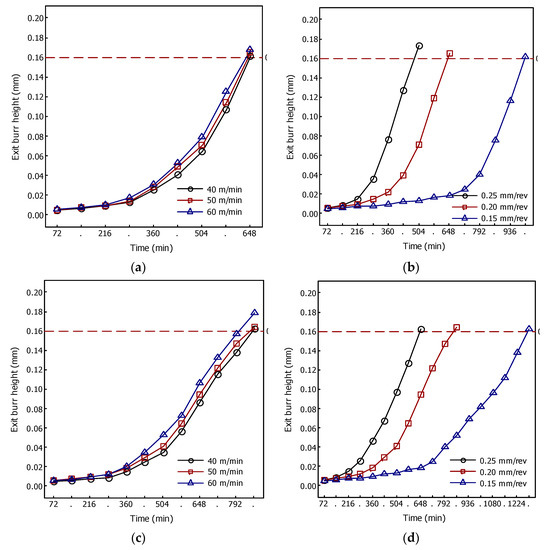 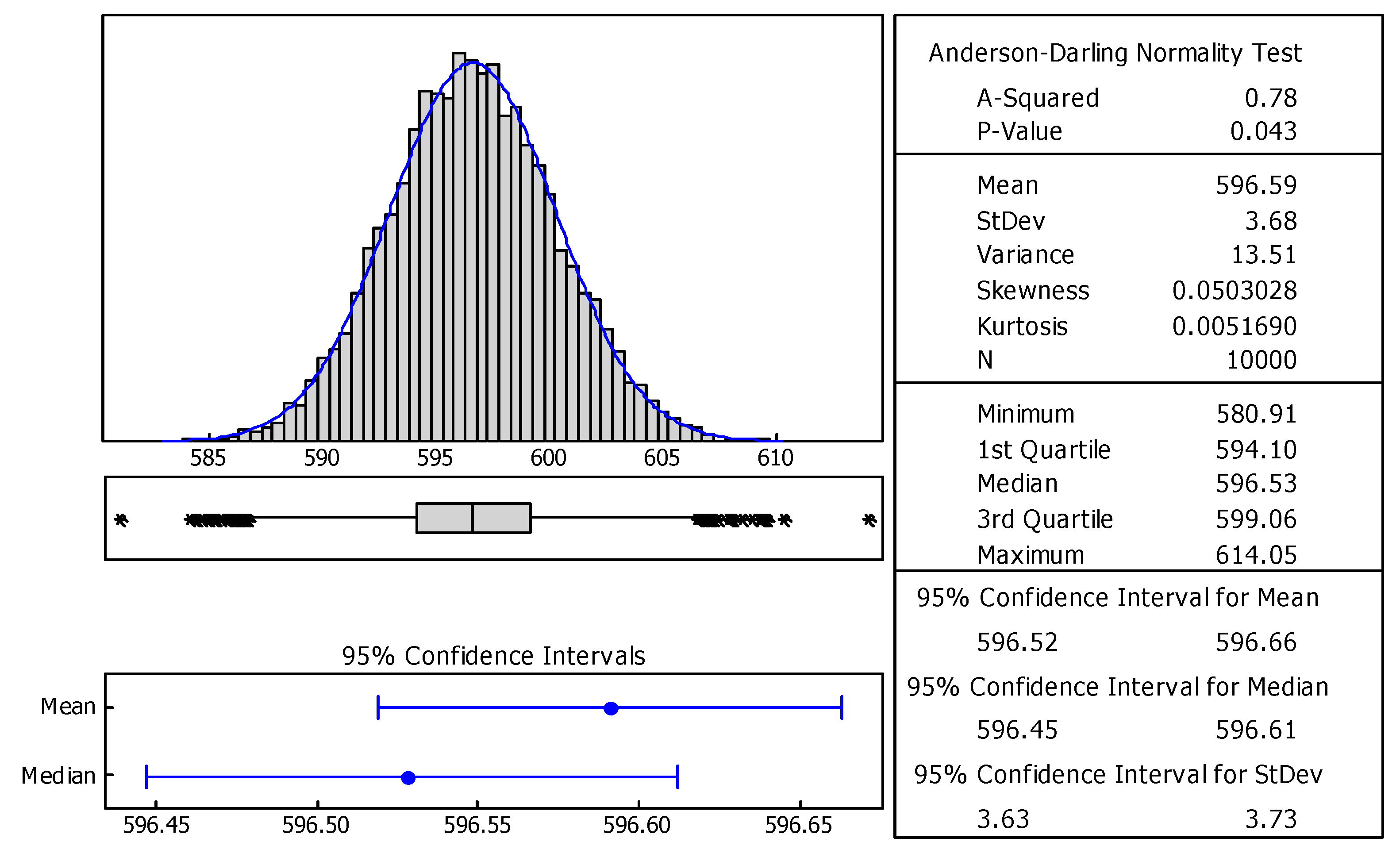