Studies on Synthesis and Characterization of Aqueous Hybrid Silicone-Acrylic and Acrylic-Silicone Dispersions and Coatings. Part I
Previous Article in Journal

Effect of Surface Topography and Structural Parameters on the Lubrication Performance of a Water-Lubricated Bearing: Theoretical and Experimental Study
Previous Article in Special Issue

:
We investigate the effect of continuous vs. periodically interrupted plasma exposure during cathodic arc evaporation on the elastic modulus as well as the residual stress state of metastable cubic TiAlN coatings. Nanoindentation reveals that the elastic modulus of TiAlN grown at floating potential with continuous plasma exposure is 7%–11% larger than for coatings grown with periodically interrupted plasma exposure due to substrate rotation. In combination with X-ray stress analysis, it is evident that the elastic modulus is governed by the residual stress state. The experimental dependence of the elastic modulus on the stress state is in excellent agreement with ab initio predictions. The macroparticle surface coverage exhibits a strong angular dependence as both density and size of incorporated macroparticles are significantly lower during continuous plasma exposure. Scanning transmission electron microscopy in combination with energy dispersive X-ray spectroscopy reveals the formation of underdense boundary regions between the matrix and TiN-rich macroparticles. The estimated porosity is on the order of 1% and a porosity-induced elastic modulus reduction of 5%–9% may be expected based on effective medium theory. It appears reasonable to assume that these underdense boundary regions enable stress relaxation causing the experimentally determined reduction in elastic modulus as the population of macroparticles is increased.
Keywords:
physical vapor deposition; metastable materials; TiAlN; elastic properties; residual stress; density functional theory 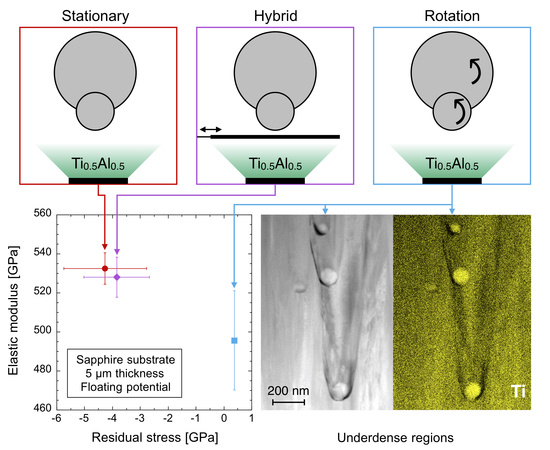 Metastable cubic transition metal aluminum nitrides such as TiAlN (space group Fmm, NaCl prototype) have been well known as hard protective coatings for more than 30 years [1], and are still used nowadays as state-of-the-art materials for cutting and forming applications. However, there is no “the” TiAlN, since materials design enables to tailor the desired properties, such as enhanced thermal stability [2,3]. With respect to a material’s bond strength, the elastic modulus connects as design parameter density functional theory-based predictions at the atomic scale with mechanical testing techniques such as nanoindentation. Recently, it has been demonstrated for Cr0.8Al0.2N that a compressive stress state of −4 GPa results in an elastic modulus increase of 150 GPa, when compared to the stress-free material [4]. In addition, compressive residual stresses are utilized to stabilize the metastable cubic phase of MAlN (M = Ti, V, Cr) [5,6].
Protective coatings are usually fabricated by physical vapor deposition (PVD) techniques, such as (high power pulsed) magnetron sputtering or cathodic arc evaporation, and the latter technique is characterized by an almost fully ionized plasma. These techniques are line-of-sight methods, but not limited to materials synthesis on a stationary substrate. Very often, rotating substrates are assembled in industrial batch production plants in order to coat as many substrates as possible in a single deposition process. In such a deposition geometry, the growing coating surface is periodically moved in and out of regions of high plasma density characterized by large fluxes of film-forming species. Recently, we have demonstrated for TiAlON that substrate rotation induces chemical composition modulations, which can be understood by variations in plasma density and fluxes of film-forming species [7]. Going beyond the substrate rotation-induced chemical composition, it appears reasonable that the deposition geometry affects the material performance. Therefore, in the present work we establish the relationship between deposition geometry and mechanical coating properties by means of elasticity, as well as the residual stress state of TiAlN.

We have investigated the effect of continuous vs. periodically interrupted plasma exposure during cathodic arc evaporation on the elastic modulus as well as the residual stress state of metastable cubic TiAlN coatings. The elastic modulus of TiAlN grown at floating potential with continuous plasma exposure is 7%–11% larger than for coatings grown with periodically interrupted plasma exposure due to substrate rotation. Excellent agreement between the experimental and predicted stress-dependent elastic modulus data was obtained. Growth experiments with periodically interrupted plasma exposure due to shutters allowed to infer that the exposure time of the substrate to the plasma is not decisive for the residual stress state. The macroparticle surface coverage exhibits a strong angular dependence, since both density and size of incorporated macroparticles are significantly lower due to continuous plasma exposure. Employing scanning transmission electron microscopy in combination with energy dispersive X-ray spectroscopy, it was revealed that underdense boundary regions are formed between the matrix and TiN-rich macroparticles and the estimated porosity is in the order of 1%. Hence, based on effective medium theory an elastic modulus reduction of 5%–9% has to be expected. It appears reasonable to assume that these underdense boundary regions enable stress relaxation causing the experimentally determined reduction in elastic modulus as the population of macroparticles is increased.