Carbon-Coated Nickel Nanoparticles: Effect on the Magnetic and Electric Properties of Composite Materials
Next Article in Special Issue

Electrochromic materials have increasingly garnered attention due to their potential applications in low-energy consumption displays, antiglare mirrors, smart windows, and adaptive camouflages [1]. Electrochromic materials are mainly classified as inorganic metal oxides, conjugated polymers, Prussian blue, metal metallohexacyanates, metal phthalocyanines, and viologens [2]. Among these materials, conjugated polymers have been widely investigated due to their satisfactory optical contrast, high coloration efficiency, rapid electrochromic switching speed, multiple color exhibitions, and tunable optical band gap with chemical structure modifications. Recently, conjugated polymers such as polytriphenylamines [3], polycarbazoles [4], polyanilines [5,6], polybenzothiadiazoles [7], polyindoles [8], polythiophenes [9], and polybenzotriazoles [10] have been reported for particular electrochromic behaviors. Among these conjugated polymers, polytriphenylamines and polycarbazoles have hole transport properties and can be oxidized to form stable aminium radical cations, and the polymer films exhibit distinct color variations during the redox process. Reynolds et al. reported that the optical contrast of multifunctional triphenylamine polymers was up to 45% [11] and Hsiao et al. reported that electroactive polyamides and polyimides containing trityl-triphenylamine units revealed good thermal stability and a green-blue or blue coloring variation upon applying potentials, with the ∆T between neutral and oxidized states of polymer film up to 84% at 828 nm [12]. Polythiophenes and their derivatives have garnered attention for use in organic electrochromic materials due to their special optical and electrochemical characteristics such as low band gap and reversibility of the redox processes. Moreover, each repeat unit of poly(2,5-dithienylpyrrole)s (PSNS) incorporated a pyrrole ring between two thiophene units, which gave rise to decreases in the onset potential of polymer films. The incorporation of alkyl and alkoxy groups to the nitrogen atom of central pyrrole unit in PSNS backbone gave rise to good solubility of PSNS in general solvents and tunable band gap of PSNS [13]. Koyuncu et al. reported a new low band gap electrochromic polymer (poly(SNSC-BSe)) consisting of 2,5-dithienylpyrrole, carbazole, and 2,1,3-benzoselenadiazole units; the poly(SNSC-BSe) film showed a high contrast ratio (51%) in the near-infrared region, a high coloration efficiency (274 cm2 C−1), and retained 94.6% of its electrochemical activity after 1000 cycles [14]. Soganci et al. synthesized two amide-substituted poly(dithienylpyrrole)s (P(PBA) and P(PBA-co-EDOT)) and reported their multichromic behaviors: P(PBA-co-EDOT) displayed low band gap (1.67 eV), high optical contrast (77% at 1000 nm), and high coloration efficiency (697.01 cm2 C−1) [15]. Furthermore, copolymers supply effectual ways for modulating the electrochromic properties of conjugated polymers, thereby combining or changing the electrochromic behaviors of individual homopolymers. Camurlu et al. [16] reported the optoelectronic performances of poly(2,5-dithienylpyrrole)s with fluorophore units, which were namely PSNS-Carb and PSNS-Flo. PSNS-Carb showed yellow to blue upon doping and displayed an optical contrast of 27.78%. Two copolymers (P(SNS-Carb-co-EDOT) and P(SNS-Flo-co-EDOT)) were also synthesized electrochemically: P(SNS-Carb-co-EDOT) displayed a wide range of colors upon oxidation (ruby, orange, yellow, green, blue, and gray), whereas P(SNS-Flo-co-EDOT)) showed several colors from boysenberry to orange, yellow, green, blue, and gray. Moreover, the optical contrast and coloration efficiency of P(SNS-Carb-co-EDOT) and P(SNS-Flo-co-EDOT) were higher than those of PSNS-Carb and PSNS-Flo, respectively.
In this study, three 2,5-dithienylpyrrole- and tris(4-(thiophen-2-yl)phenyl)amine-based copolymers (P(MPS-co-TTPA), P(MPO-co-TTPA), and P(ANIL-co-TTPA)) were copolymerized electrochemically. The chemical structure of 1-(4-(methylthio)phenyl)-2,5-di(thiophen-2-yl)-pyrrole (MPS) is similar to 1-(4-methoxyphenyl)-2,5-di(thiophen-2-yl)-pyrrole (MPO) and 4-(2,5-di(thiophen-2-yl)-pyrrol-1-yl)benzonitrile (ANIL). Methylthio-phenyl, methyloxy-phenyl, and cyano-phenyl were incorporated to the central pyrrole rings of MPS, MPO, and ANIL units, respectively. The methylthio-phenyl and methyloxy-phenyl groups are electron-donating units in MPS and MPO, respectively, whereas the cyano-phenyl group is an electron-withdrawing unit in ANIL. The highest occupied molecular orbital (HOMO) level, lowest unoccupied molecular orbital (LUMO) level, and band gap of PSNS can be modulated using various electron-donating and electron-withdrawing units. Moreover, tris(4-(thiophen-2-yl)phenyl)amine (TTPA) with a triphenylamine unit as the core and three thiophene units as the arms has attracted increasing attention due to its high stability to electrochemical redox reaction and electrochromic switching [17]. The electron-donating triphenylamine unit decreases the oxidation potential of the entire TTPA. Accordingly, poly(TTPA) shows lower Eonset than that of polythiophenes. It was interesting to combine the TTPA unit and SNS derivatives in copolymer backbones and investigate the electrochromic characteristics of copolymer films. Moreover, the electrochromic devices (ECDs) were fabricated using P(MPS-co-TTPA), P(MPO-co-TTPA), or P(ANIL-co-TTPA) as the anodic coloring electrode, PProDOT-Et2 as the complementary counter electrode, and an ionic liquid/poly(vinylidene fluoride-co-hexafluoropropylene) (PVDF-HFP) composite film as the electrochromic electrolyte. The percent transmittance variations, coloration efficiency, long-term cycling stability, and open-circuit memory of ECDs were comprehensively explored.

Electrochromic electrolyte was prepared using a mixture containing ionic liquid ([EPI+][TFSI–]), poly(vinylidene fluoride-co-hexafluoropropene) (PVDF-HFP), propylene carbonate, and dimethylformamide organic solvent [22]. Dual-type ECDs were framed using P(MPS-co-TTPA), P(MPO-co-TTPA), or P(ANIL-co-TTPA) film as the anodic electrode material and PProDOT-Et2 as the cathodic electrode material. The anodic and cathodic polymer films were positioned to face each other and were separated by an electrochromic electrolyte, as shown in Figure 1.

Y.-S.S., J.-C.C., and T.-Y.W. conceived the research topic, implemented the experiments, and analyzed the electrochromic properties.

The authors would like to thank the Ministry of Science and Technology (MOST) of the Republic of China for financially supporting this project. 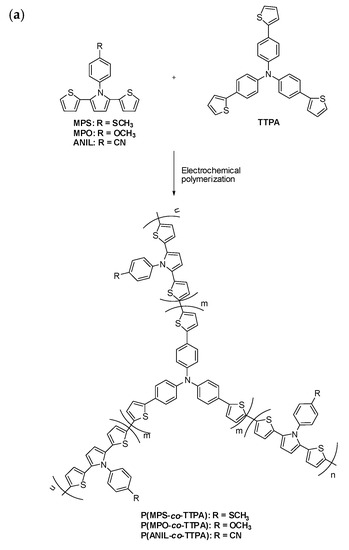 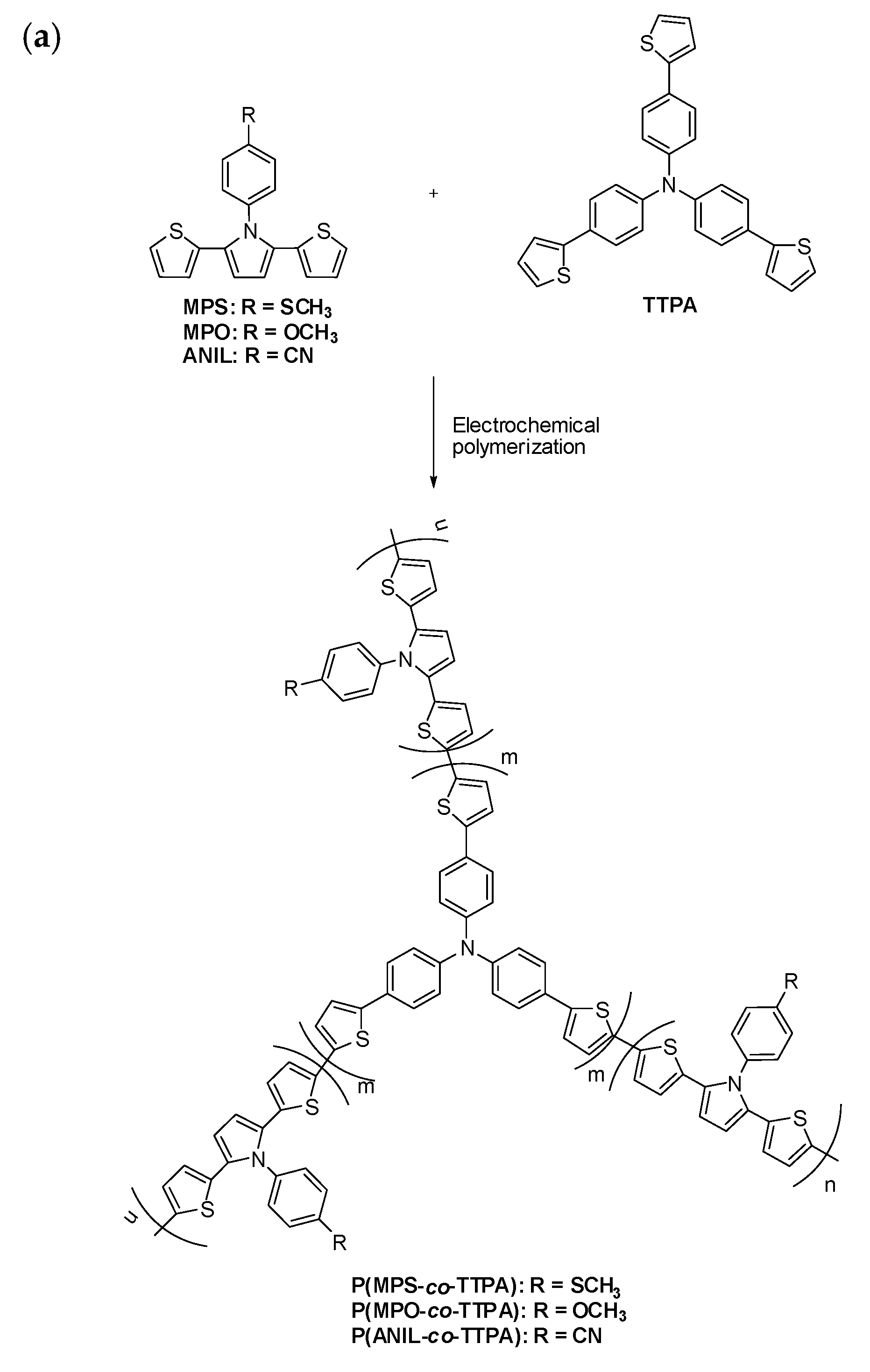 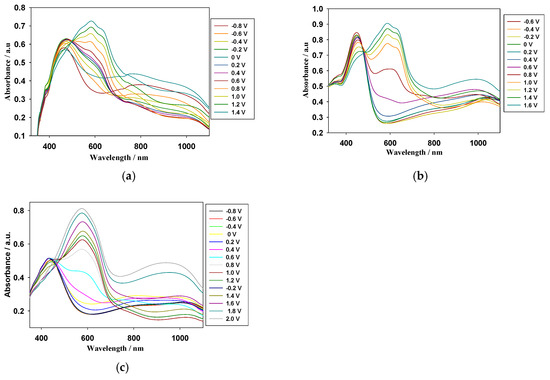 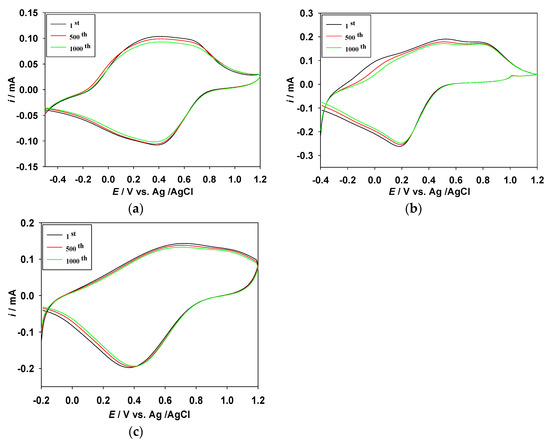 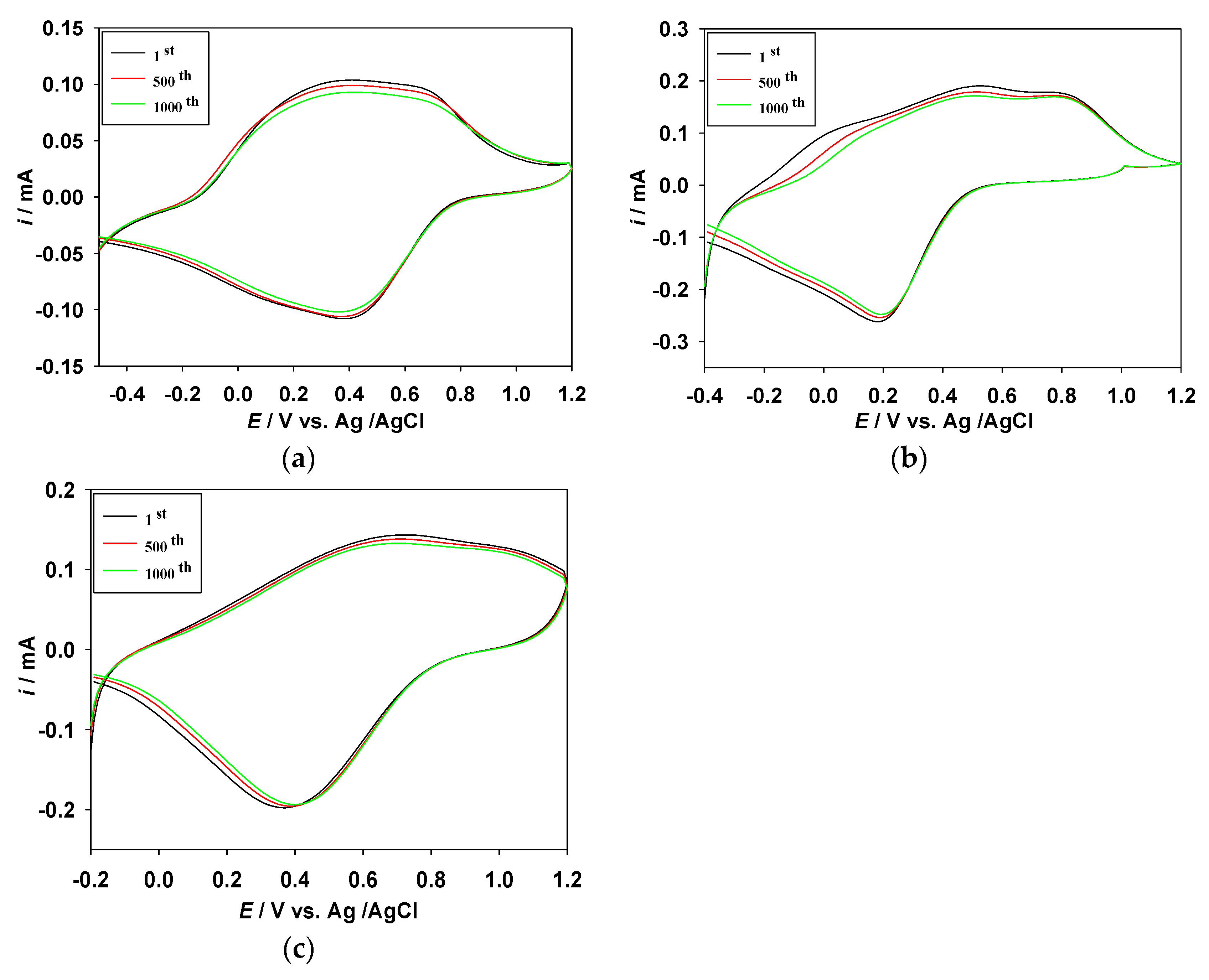