As an emerging coating building technique, cold spraying has many advantages to elaborate Mg alloy workpieces. In this study, AZ91D coatings and AZ91D-based composite coatings were deposited using cold spraying. Coatings were prepared using different gas temperatures to obtain the available main gas temperature. Compressed air was used as the accelerating gas, and although magnesium alloy is oxidation-sensitive, AZ91D coatings with good performance were obtained. The results show that dense coatings can be fabricated until the gas temperature is higher than 500 °C. The deposition efficiency increases greatly with the gas temperature, but it is lower than 10% for all coating specimens. To analyze the effects of compressed air on AZ91D powder particles and the effects of gas temperature on coatings, the phase composition, porosity, cross-sectional microstructure, and microhardness of coatings were characterized. X-ray diffraction and oxygen content analysis clarified that no phase transformation or oxidation occurred on AZ91D powder particles during cold spraying processes with compressed air. The porosity of AZ91D coatings remained between 3.6% and 3.9%. Impact melting was found on deformed AZ91D particles when the gas temperature increased to 550 °C. As-sprayed coatings exhibit much higher microhardness than as-casted bulk magnesium, demonstrating the dense structure of cold-sprayed coatings. To study the effects of ceramic particles on cold-sprayed AZ91D coatings, 15 vol % SiC powder particles were added into the feedstock powder. Lower SiC content in the coating than in the feedstock powder means that the deposition efficiency of the SiC powder particles is lower than the deposition efficiency of AZ91D particles. The addition of SiC particles reduces the porosity and increases the microhardness of cold-sprayed AZ91D coatings. The corrosion behavior of AZ91D coating and SiC reinforced AZ91D composite coating were examined. The SiC-reinforced AZ91D composite coating reveals higher corrosion potential than magnesium substrate; therefore, it serves as a cathode for the magnesium substrate, the same as the AZ91D coating on magnesium substrate. As the SiC powder is semi-conductive, the embedded SiC particles reduce the electrochemical reaction of the AZ91D coating. The addition of SiC particles increases the corrosion potential of the coating, meanwhile increasing the galvanic potential and decreasing the negative galvanic current of the coating-substrate couple.
Keywords: cold spraying; coating; magnesium alloy; composite coatings; corrosion; microstructure cold spraying; coating; magnesium alloy; composite coatings; corrosion; microstructure

Magnesium (Mg) alloys have potential use in aircraft and automobile industries due to their excellent specific strength [1]. They are also used to protect steel structures from corrosion in freshwater and soil environments as sacrificial anodes [2]. Casting is the main technique to produce AZ91D alloy workpieces; however, it is not suitable to fabricate large or complex-shaped products [3]. In addition, AZ91D work pieces are difficult to be repaired using traditional techniques (tungsten inert gas (TIG) welding [4], metal inert gas (MIG) welding [5], and thermal spraying [6], etc.) due to their high-temperature activity.
As an emerging coating building and rebuilding technique, cold spraying has advantages to elaborate Mg alloy workpieces [7,8]. In cold spraying, particles are accelerated to a high velocity (300~1200 m·s−1) by a high-pressure thermal gas through a de Laval-type nozzle. Then, the particles can deposit onto a substrate and form a coating once the particle velocity exceeds the critical velocity of the material [9,10]. In the view of bonding, the jet formation of impact couples is viewed as the necessary condition.
In cold spraying, the main gas temperature is lower than the melting point of the sprayed material; thus, oxidization can be avoided. In the past decade, cold spraying has been used to deposit oxidation-sensitive alloys, such as Ti [11], Al [12,13], and Mg [8] alloy coatings. In addition, cold spraying was successfully used to repair Al alloy gearbox components [14]. However, few publications on cold-sprayed AZ91D coatings and AZ91D-based composite coatings were reported. Based on this fact, AZ91D powder was used to elaborate coatings using cold spraying in this paper, and SiC powder was used as reinforcing particles to deposit the composite coatings. In consideration of the application of cold-sprayed Mg alloy workpieces, compressed air, not noble gas, was used as the accelerating gas. Different gas temperatures were conducted to study the feasibility of fabricating cold-sprayed Mg alloy work pieces, and then ceramic particles were added as reinforcement to improve the performance of the coatings. The effects of gas temperature and the addition of ceramic particles on the coatings’ microstructure and electrochemical behaviors were evaluated.

A commercially-available AZ91D powder (WeiHao Magnesium Powder Co., Ltd., Tangshan, China) and SiC powder (Sulzer Metco, Bron, France) were used to produce coatings. The AZ91D particles presented a spherical shape (Figure 1a), and the grain orientation is random (Figure 1b). SiC particles show dendritic morphology with sharp edges (Figure 1c). Size distribution of the powder was examined using a MASTERSIZER 2000 system (Malvern Panalytical Ltd., Royston, UK). The size distribution of the AZ91D powder was in the range from 34 µm to 81 µm, and averaged 52 µm (Figure 1d). The size distribution of SiC powder is from of 4 µm to 55 µm, and averaged 15 µm (Figure 1e). The content of SiC particles in the feedstock powder was 30 vol %. Stainless steel and magnesium plates with a dimensions of 60 mm × 20 mm × 2 mm were used as substrates. The substrates were sandblasted using alumina grits (ISO 6344, Grit designation, P100) prior to spraying.

A self-designed rectangular cross-section nozzle was used to fabricate the coatings. The expansion ratio of the nozzle is 4.9. The outlet diameter of the nozzle is 6.5 mm and the divergent section length is 170 mm. Compressed air and argon were used as the main gas and the carrier gas, respectively. The main gas pressure in a pre-chamber was 2.5 MPa, and the gas temperatures were changed in a range from 450 °C to 600 °C. The powder feed rate was 70 g·min−1. The standoff distance was 30 mm. The nozzle was fixed on a robot in order to maintain a traverse speed of 100 mm·s−1. The beam distance was 2 mm. Each coating contains two layers.

The particle morphology and coating fracture morphologies were observed using a scanning electron microscope (SEM) (JEOL, JSM-5800LV, Tokyo, Japan). The coatings cross-sections were observed using an optical microscope (OM) (Nikon, Tokyo, Japan) and SEM. Porosity was estimated using an open software, Image J (National Institutes of Health, Bethesda, MD, USA). X-ray diffraction (XRD, D/mas-2400, Rigaku, Tokyo, Japan) was used to determine the phases in the feedstock powder and coatings. Oxygen contents in both the feedstock powder and cold-sprayed coatings were measured using an oxygen, nitrogen, and hydrogen analyzer (ONH-2000, ELTRA, Haan, Germany). The microhardness of the coatings was measured under a load of 300 g with a dwell time of 15 s. For each coating, three specimens were used to measure the microhardness. In addition, for each specimen, 10 measurements were conducted in random locations to obtain the average microhardness.
To evaluate the corrosion protective effects of the Mg alloy coatings, electrochemical measurements were performed by a standard three-electrode electrochemical cell in air saturated with a 0.1 M Na2SO4 solution. Coating specimens were conducted as the working electrode with a surface of 10 mm × 10 mm. The counter electrode was a platinum sheet with a surface of 8 mm × 8 mm. The reference electrode was a saturated mercury sulfate electrode (Hg/Hg2SO4). The solution concentration inside the reference electrode compartment was a saturated K2SO4 solution, with a potential of 640 mV with respect to the normal hydrogen electrode (NHE) and a potential of 400 mV with respect to the saturated calomel electrode (SCE). The open circuit potential (OCP) and polarization scans were conducted on an electrochemical workstation (Reference 600TM, Potentiostat/Galvanostat/ZRA, Gamry Instruments, Inc., Warminster, PA, USA). Potentiodynamic scans were performed from −0.1 V to 2.5 V (vs. OCP) with a scan rate of 1 mV/s. Galvanic interaction between the coatings and the substrate has been studied by continuous monitoring of the galvanic potential and the galvanic current using ZRA measurements.

3.1. Effects of Gas Temperature on the AZ91D Coatings

AZ91D coatings and SiC-reinforced AZ91D composite coating were fabricated using cold spraying. Compressed air was used as the main gas, and the effects of gas temperature were studied. It was found that the gas temperature should be higher than 450 °C for cold spraying of spherical AZ91D powder particles. The deposition efficiency increases greatly with the gas temperature and it is lower than 10% for all coating specimens. The coating average porosity remained between 3.6% and 3.9% when the gas temperature is in the range of 500~600 °C. Coatings are denser when the gas temperature is higher. XRD results showed that no phase transformation or oxidization occurred during the cold spraying process of AZ91D. The microhardness of the coatings (approximately 100 HV) was much higher than that of as-casted bulks due to the work hardening effect. Gas temperature does not show an obvious influence on microhardness. Partial impact melting was found between AZ91D particles in the coatings fabricated at 550 °C and 600 °C.
15 vol % SiC powder particles were added to feedstock powder as reinforcement to improve the coating performance. Results showed that the SiC content of coatings is 10.7 ± 3.2 vol %. Reduced SiC content means that the deposition efficiency of the SiC powder particles is lower than the deposition efficiency of the AZ91D particles. The addition of SiC particles reduces the porosity and increases the microhardness of cold-sprayed AZ91D coatings. Both the AZ91D coating and SiC-reinforced AZ91D composite coating serve as the cathode for the magnesium substrate due to the relatively higher corrosion potential. The addition of SiC particles increases the open circuit potential of the AZ91D coating, meanwhile increasing the galvanic potential and decreasing the negative galvanic current of the coating-substrate couple.

This investigation is financially supported by the National Natural Science Foundation of China under grant no. 51601158 and the Qihang Science Research Foundation of Southwest Petroleum University, no. 2015QHZ013. 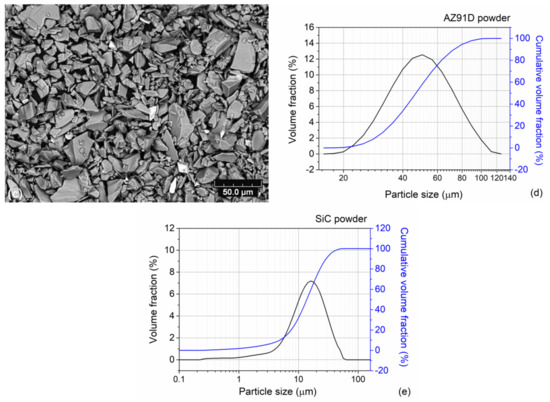 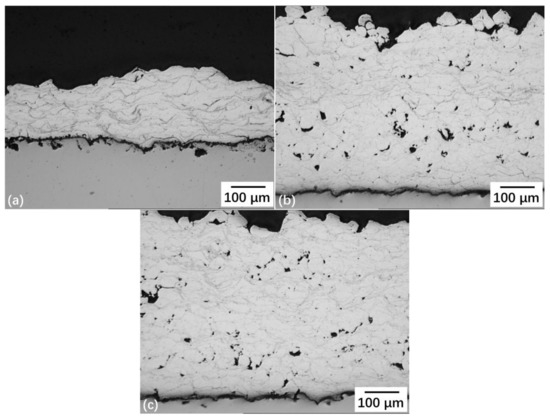 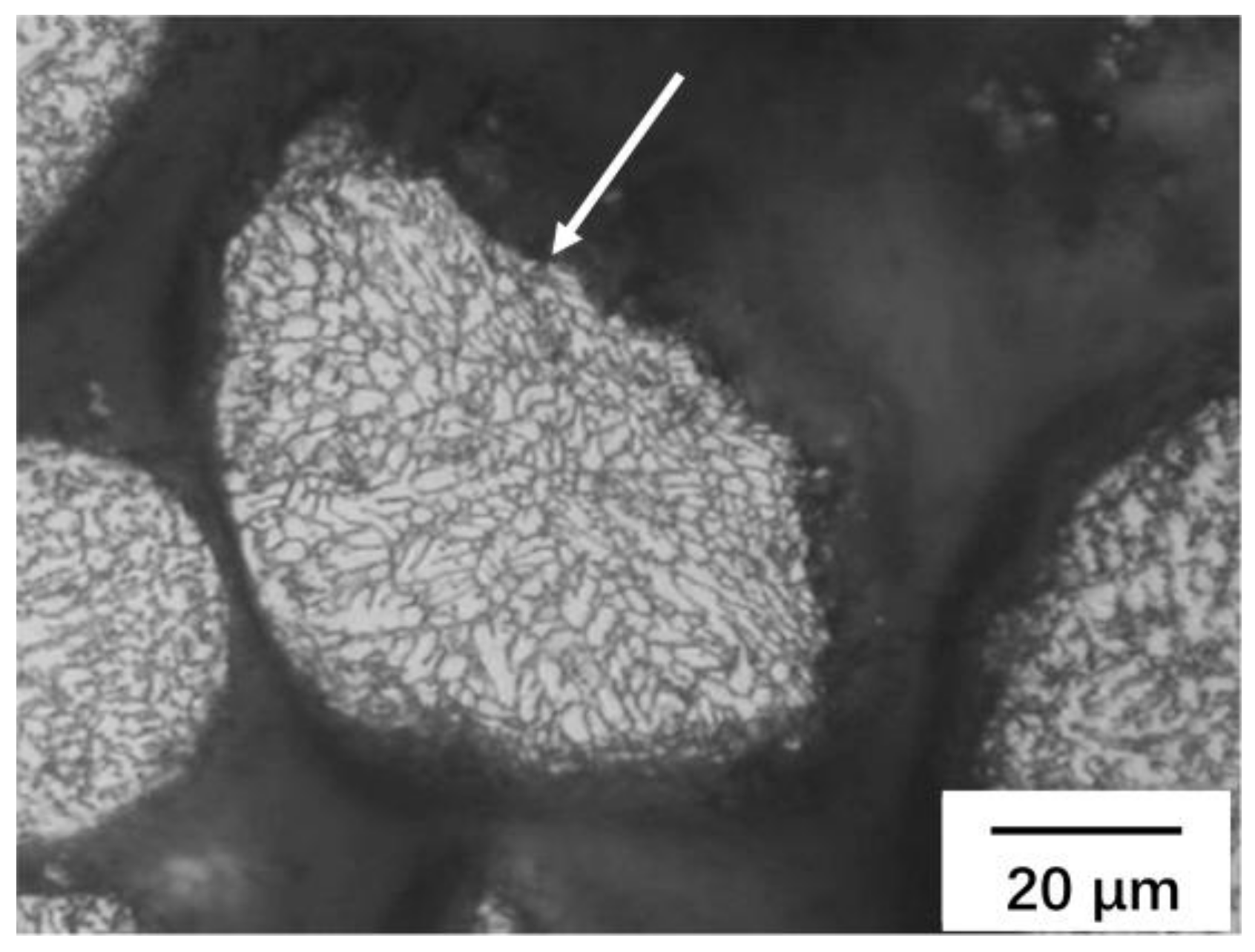 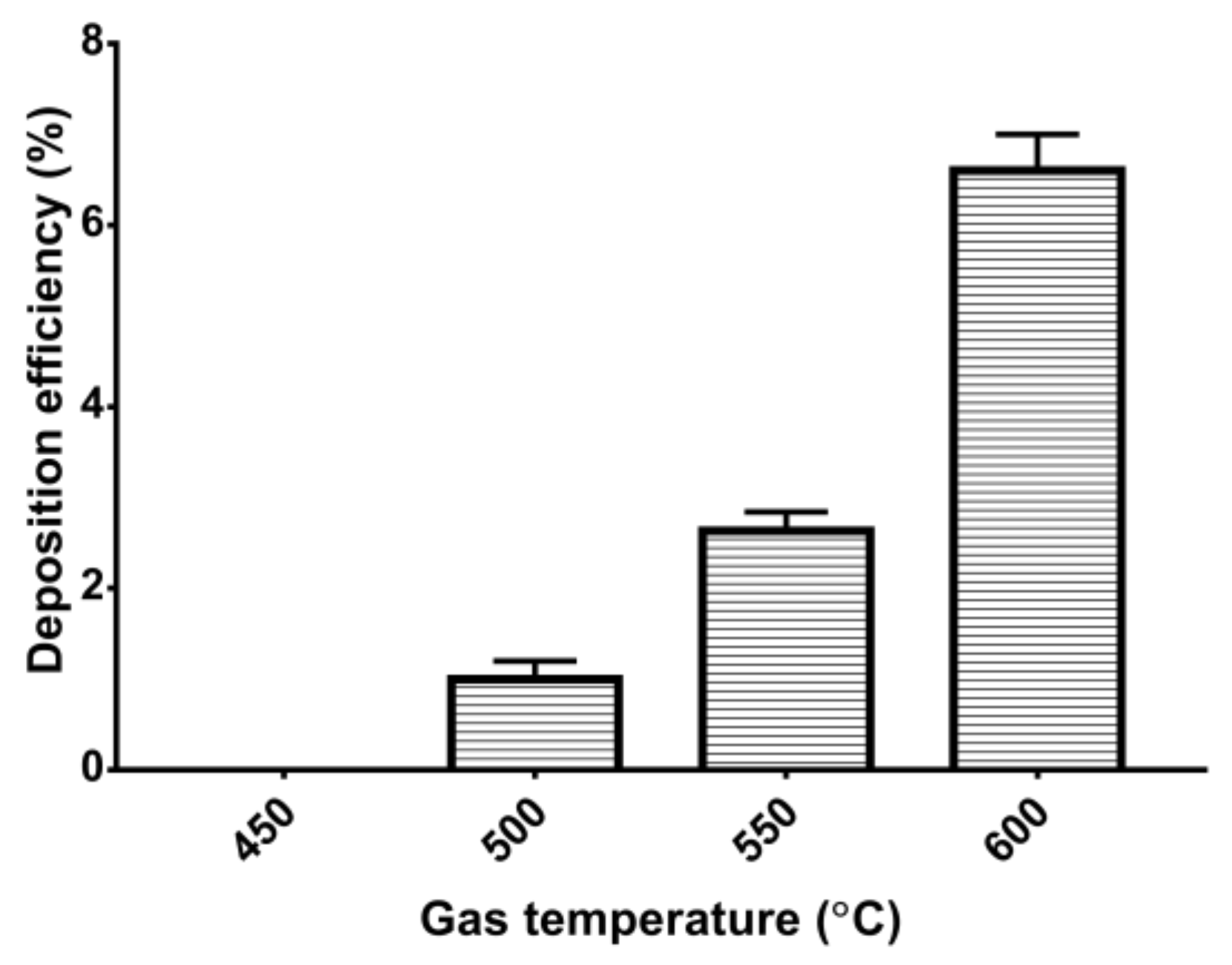 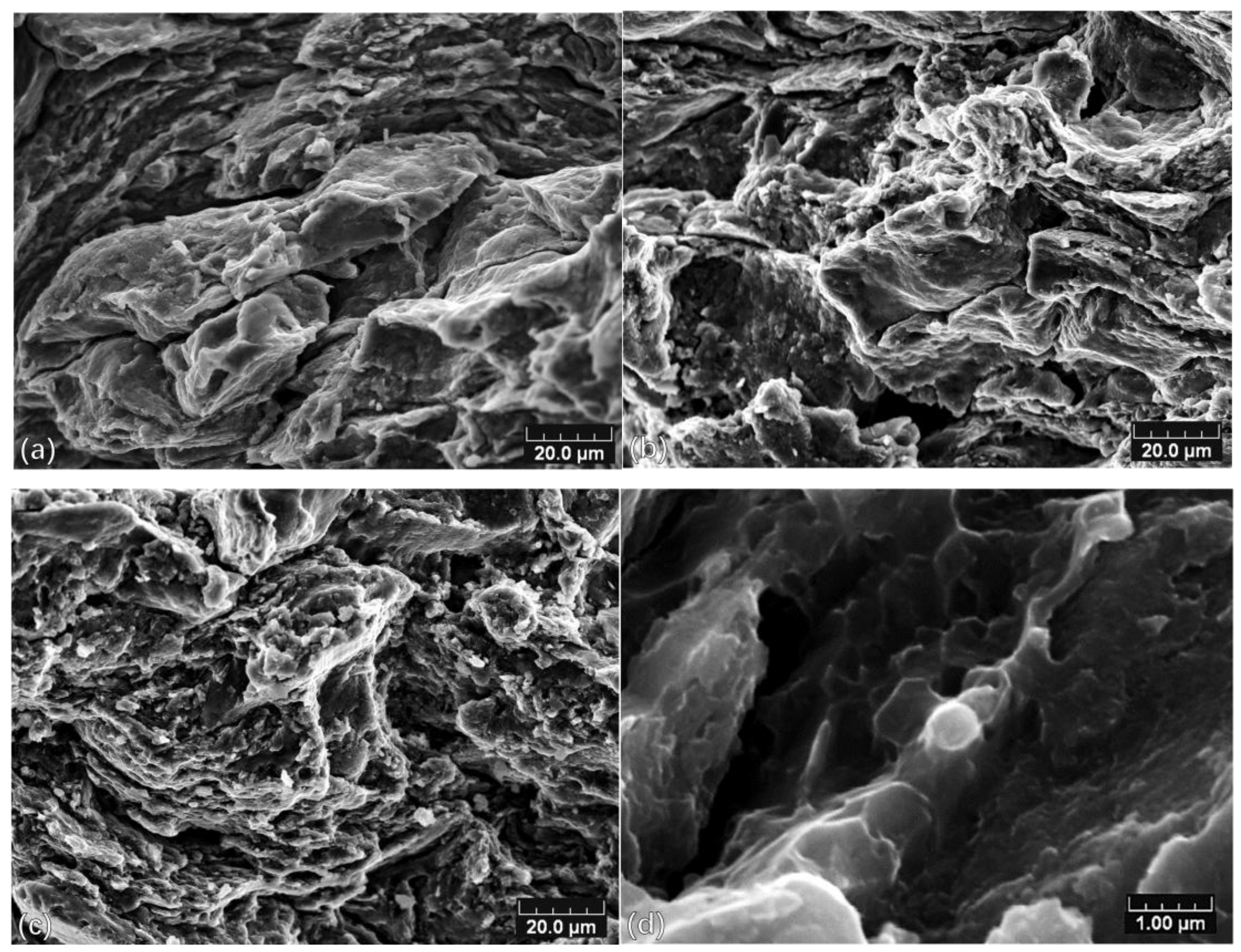 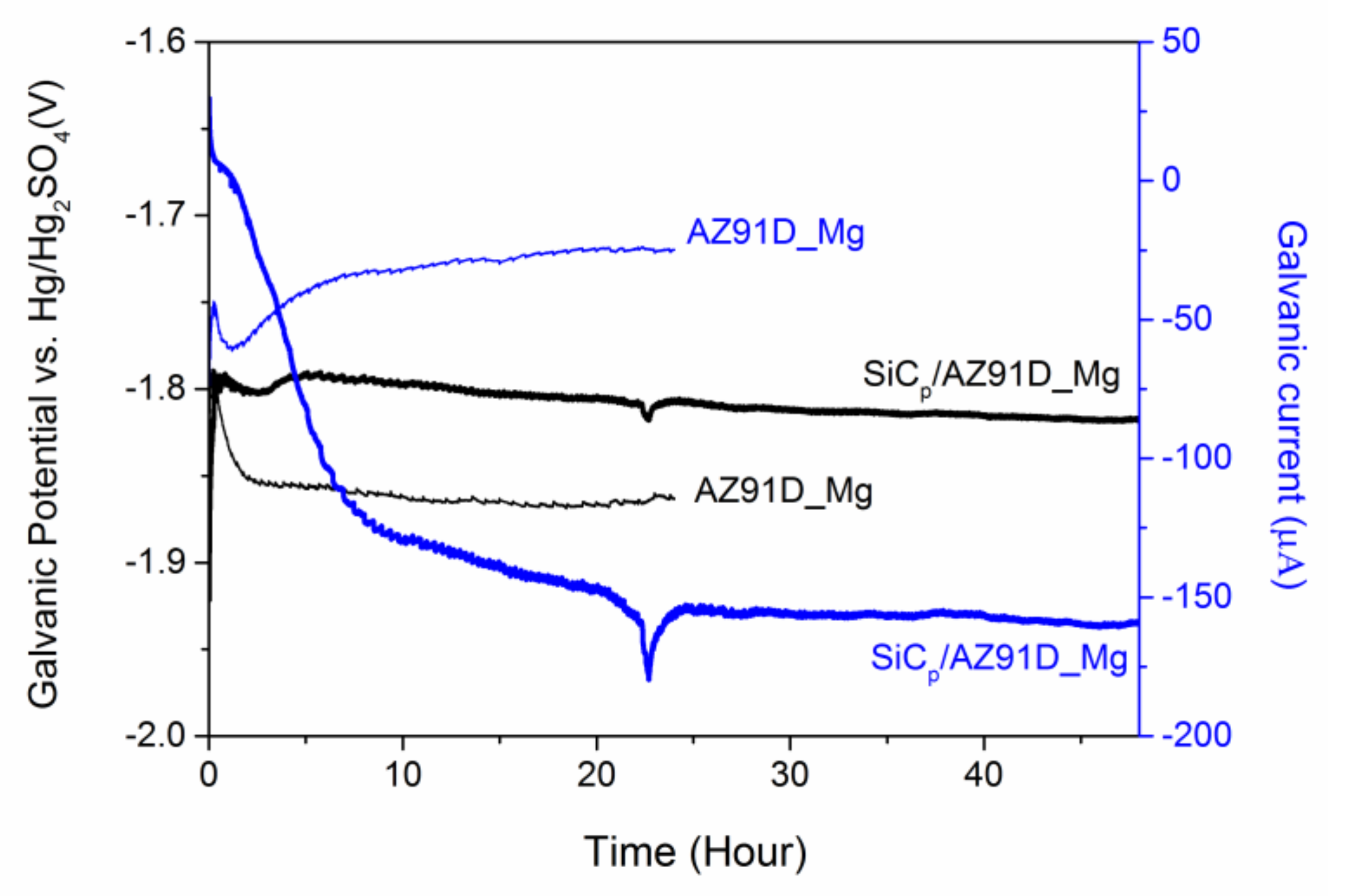