Titanium oxide films were deposited at room temperature and with no applied bias using a filtered cathodic vacuum arc (FCVA) system in a reactive oxygen environment. The dependence of film growth on two process parameters, the working pressure (Pw) and the O2 partial pressure (pO2), is described in detail. The composition, morphological features, crystalline structure, and optical properties of the deposited films were systematically studied by Rutherford Back Scattering (RBS), Scanning Electron Microscopy (SEM), X-Ray diffraction (XRD), Raman Spectroscopy, UV-vis spectroscopy, and spectroscopic ellipsometry. This systematic investigation allowed the identification of three different groups or growth regimes according to the stoichiometry and the phase structure of the titanium oxide films. RBS analysis revealed that a wide range of TiOx stoichiometries (0.6 < × < 2.2) were obtained, including oxygen-deficient, stoichiometric TiO2 and oxygen-rich films. TiO, Ti2O3, rutile-type TiO2, and amorphous TiO2 phase structures could be achieved, as confirmed both by Raman and XRD. Therefore, the results showed a highly versatile approach, in which different titanium oxide stoichiometries and crystalline phases especially suited for diverse optical applications can be obtained by changing only two process parameters, in a process at room temperature and without applied bias. Of particular interest are crystalline rutile films with high density to be used in ultra-high reflectance metal-dielectric multilayered mirrors, and reduced-TiO2 rutile samples with absorption in the visible range as a very promising photocatalyst material. View Full-Text
Keywords: titanium oxide films; filtered cathodic vacuum arc; rutile; optical coatings titanium oxide films; filtered cathodic vacuum arc; rutile; optical coatings
►▼ Show Figures 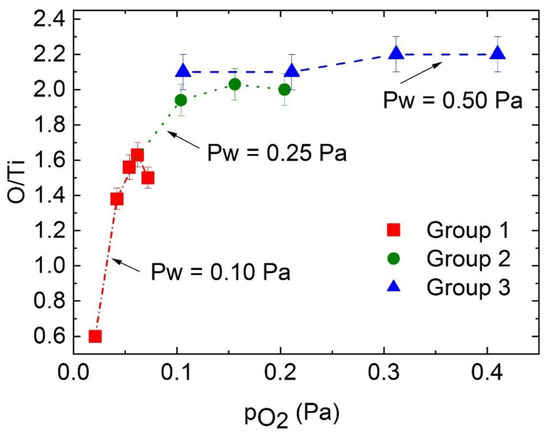