Thermoplastic processing and spinning of native starch is very challenging due to (a) the linear and branched polymers (amylose and amylopectin) present in its structure and (b) the presence of inter-and-intramolecular hydrogen bond linkages in its macromolecules that restrict the molecular chain mobility. Therefore, in this study, oxidized starch (OS) (obtained after oxidation of native starch with sodium perborate) was melt-blended with polylactic acid (PLA) polymer to prepare PLA/OS blends that were then mixed together with ammonium polyphosphate (APP), a halogen-free flame retardant (FR) used as acid donor in intumescent formulations on twin-screw extruder to prepare PLA/OS/APP composites. OS with different concentrations also served as bio-based carbonic source in intumescent formulations. PLA/OS/APP composites were melt spun to multifilament fibers on pilot scale melt-spinning machine and their crystallinity and mechanical properties were optimized by varying spinning parameters. The crystallinity of the fibers was studied by differential scanning calorimetry and thermal stabilities were analyzed by thermogravimetric analysis. Scanning electron microscopy was used to investigate the surface morphology and dispersion of the additives in the fibers. Needle-punched non-woven fabrics from as prepared melt-spun PLA/OS/APP fibers were developed and their fire properties such as heat release rate, total heat release, time to ignition, residual mass % etc. by cone calorimetry test were measured. It was found that PLA/OS/APP composites can be melt spun to multifilament fibers and non-woven flame-retardant fabrics produced thereof can be used in industrial FR applications. View Full-Text
Keywords: thermal processing; flame-retardant; composites; non-wovens; polylactic acid thermal processing; flame-retardant; composites; non-wovens; polylactic acid
►▼ Show Figures 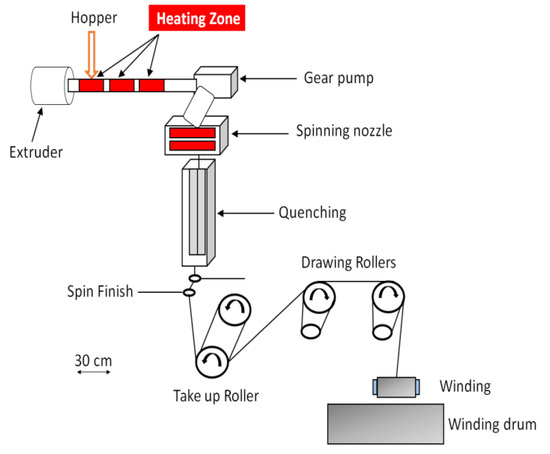