In this study, four organic solvents including 1,2-dichlorobenzene (DCB), chlorobenzene (CB), methylbenzene (MB), and chloroform (CF) were used as solvents in the [6,6]-phenyl-C61-butyric acid methyl ester (PCBM) electron transport layer (ETL) of perovskite solar cells (PSCs). This study observed the effects of various solvents on the surface morphology of the ETL by using an optical microscope (OM) and scanning electron microscope (SEM). The surface roughness, crystal structure, and surface element bonding of the ETL were observed using an atomic force microscope (AFM), X-ray diffractometer (XRD), and X-ray photoelectron spectroscope (XPS), respectively. The absorption spectrum of the perovskite layer was explored using an ultraviolet-visible (UV-Vis) spectrometer. The characteristics of the PSC device were analyzed in terms of its current density–voltage (J–V) curve, external quantum efficiency (EQE), and electrochemical impedance spectroscopy (EIS) measurements. The results showed that DCB is a solvent with a high boiling point, low vapor pressure, and high dielectric constant, and using DCB as the solvent for ETL, the uniformity, coverage, and surface roughness of the ETL showed better properties. The power conversion efficiency of the PSC in which DCB was used as the solvent achieved a value of 11.07%, which was higher than that of the PSCs in which other solvents were used. View Full-Text
Keywords: perovskite solar cells; electron transport layer; 1,2-dichlorobenzene; organic solvents perovskite solar cells; electron transport layer; 1,2-dichlorobenzene; organic solvents
►▼ Show Figures 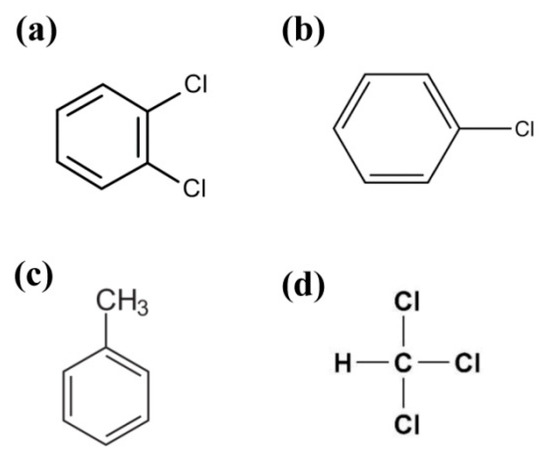