An X-ray diffraction investigation was carried out on nitrogen-containing 304 stainless steel thin films deposited by reactive rf magnetron sputtering over a range of substrate temperature and bias levels. The resulting films contained between ~28 and 32 at.% nitrogen. X-ray analysis was carried out using both the standard Bragg-Brentano method as well as area-detector diffractometry analysis. The extent of the diffraction anomaly ((002) peak shift) was determined using a calculated parameter, denoted RB, which is based on the (111) and (002) peak positions. The normal value for RB for FCC-based structures is 0.75 but increases as the (002) peak is anomalously displaced closer to the (111) peak. In this study, the RB values for the deposited films were found to increase with substrate bias but decrease with substrate temperature (but still always >0.75). Using area detector diffractometry, we were able to measure d111/d002 values for similarly oriented grains within the films, and using these values calculate c/a ratios based on a tetragonal-structure model. These results allowed prediction of the (002)/(200) peak split for tetragonal structures. Despite predicting a reasonably accessible split (~0.6°–2.9°–2θ), no peak splitting observed, negating the tetragonal-structure hypothesis. Based on the effects of film bias/temperature on RB values, a defect-based hypothesis is more viable as an explanation for the diffraction anomaly. View Full-Text
Keywords: sputter deposition; thin films; X-ray diffraction; expanded austenite sputter deposition; thin films; X-ray diffraction; expanded austenite
►▼ Show Figures 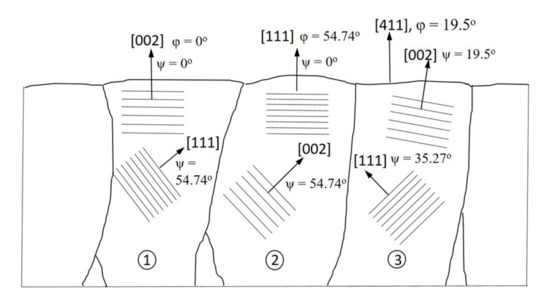