Silver is a potent antimicrobial agent against a variety of microorganisms and once the element has entered the bacterial cell, it accumulates as silver nanoparticles with large surface area causing cell death. At the same time, the bacterial cell becomes a reservoir for silver. This study aims to test the microcidal effect of silver-killed E. coli O104: H4 and its supernatant against fresh viable cells of the same bacterium and some other species, including E. coli O157: H7, Multidrug Resistant (MDR) Pseudomonas aeruginosa and Methicillin Resistant Staphylococcus aureus (MRSA). Silver-killed bacteria were examined by Transmission Electron Microscopy (TEM). Agar well diffusion assay was used to test the antimicrobial efficacy and durability of both pellet suspension and supernatant of silver-killed E. coli O104:H4 against other bacteria. Both silver-killed bacteria and supernatant showed prolonged antimicrobial activity against the tested strains that extended to 40 days. The presence of adsorbed silver nanoparticles on the bacterial cell and inside the cells was verified by TEM. Silver-killed bacteria serve as an efficient sustained release reservoir for exporting the lethal silver cations. This promotes its use as a powerful disinfectant for polluted water and as an effective antibacterial which can be included in wound and burn dressings to overcome the problem of wound contamination.
Keywords: E. coli O104:H4; sustained release; silver nanoparticles; polluted water and burn dressing E. coli O104:H4; sustained release; silver nanoparticles; polluted water and burn dressing

Increasing bacterial resistance due to inappropriate use of antibiotics is one of the most important problems facing the modern scientific community [1]; moreover, the emergence of new resistant bacterial strains to current antibiotics has become a serious public health issue. This, has raised the need to develop new bactericidal materials [2]. Hence, there is an urgent need for new approaches to overcome antibiotic resistance and to develop alternate antimicrobial agents that can control infectious diseases, the spread of pathogens and which have long-term effectiveness [3]. One area to prolong antimicrobial activity is with the incorporation of antimicrobial agents within sustained-release delivery systems for their continuous use [4,5,6]. The objective of using new sustained-release drug delivery systems is to enhance the therapeutic effectiveness of drugs, by decreasing their side effects and increasing their bioavailability in certain sites. Among the various drug delivery systems, silver nanoparticles have been widely studied, indicating that the slow release of silver cations in trace amounts is toxic to bacteria and achieves prolonged biocidal activity [7,8]. Alternative drug delivery systems include liposomes, alginate based microparticles, and magnetic capsules. Silver nanoparticles have an advantage over other antimicrobial nanoparticles in terms of more effective antimicrobial activity, which is achieved as silver ions are released from the crystalline core which triggers chemical disequilibrium to occur within bacterial cells. In addition, other nanoparticles require the initiation of a photo-thermal effect, which can lead to hypothermia occurring in some patients. Moreover, nanoparticles that are designed to initiate an antibiotic release process can suffer from a variable release process, which affects drug efficacy.
Silver is a safe inorganic antibacterial and it has the ability to kill many types of disease-causing microorganisms [9]. Furthermore, silver is bactericidal at minute concentrations, exhibiting an “oligodynamic” effect through the presence of toxic metal ions [10]. Through this, the activity of silver facilitates its use as antifungal, anti-inflammatory and antibacterial agent [11,12]. The use of silver ions (Ag+) and its compounds are used in formulation of dental resin composites, bone cement, ion exchange fibers and coatings for medical devices [13,14]. The use of silver metal as bactericidal agent requires the oxidation to the Ag+ ion, which is a slow release process under normal conditions and leads to low effective silver concentrations. Hence silver salts in the form of silver nitrate have been used for medical applications [15]. The ability of silver to ionize in solution is the main property that makes it very effective at combating bacteria as silver will begin to dissolve and ionize when exposed to water, bodily fluids, or organic tissue. An important advantage is that silver ions have a relatively low toxicity to human cells while adversely affecting bacteria and fungi by interacting with bacterial cell membranes inhibiting reproduction of harmful bacteria [16]. Bacterial kill occurs as the ions deposit themselves into the cell walls and vacuoles of bacteria, damaging cell structures including the cell envelope, cytoplasmic membrane, and the membrane’s contents. Once inside the cell, silver ions bind to DNA and RNA molecules, causing them to condense. This makes it more difficult for ribosomes to transcribe or read the DNA and RNA, a process necessary to protein synthesis and cell division [17]. Due to these properties, silver is a practical antimicrobial agent that will be utilized in years to come.
Sustained-release silver products have an on-going bactericidal action, reducing the risk for colonization and preventing infection. Silver nanoparticles (Ag NPs) have also been found to be effective water disinfectants [18]. Conventional water disinfectants, such as free chlorine, may produce harmful disinfection byproducts (DBPs); many of which are considered carcinogens, mutagens, and teratogens [19]. The bactericidal effect of Ag NPs is slow but long-term and persistent, inhibiting microorganisms present in drinking water and avoiding the production of hazardous DBPs [20]. In addition, silver nanoparticles (NPs) carrying and releasing Ag+ in a sustained release form may significantly improve the efficacy of wound treatment compared with current therapies. Topical administration of AgNPs allows optimal delivery to the dermis and improves product efficacy [21]. Furthermore, associating NPs with dressings are recent tools for wound healing treatment, especially with regard to their multifunctional properties [22].
What has been less well-researched is the extent that silver-killed bacteria exhibit a prolonged antimicrobial activity against other organisms. In this study, we tested the antimicrobial activity of silver killed E. coli O104:H4 against viable population of the same bacterium and some other notable pathogens, such as E. coli O157:H7, MDR P. aeruginosa and methicillin resistant S. aureus (MRSA). E. coli O104:H4 is an important water and food-borne pathogen that combines the virulence characteristics of enterohemorrhagic E. coli (EHEC) and enteroaggregative E. coli (EAEC) and can cause severe diseases and outbreaks. Ps. aeruginosa and S. aureus were selected because these pathogens represent common causes of wound, burn and nosocomial infectious agents; E. coli 0157: H7 was selected as a representative strain of food-borne pathogen (and it is of clinical significance).

Escherichia coli O104:H4, E. coli O157:H7, MRSA, and MDR Ps. aeruginosa were obtained from the Department of Microbiology, Faculty of Pharmacy, Minia University. All cultures were maintained in their appropriate agar slants at 4 °C and used as stock cultures. This temperature regime ensures that the bacteria used did not grow in number while maintaining cell viability (viability was demonstrated using controls).

2.3. Determination of the Minimum Inhibitory Concentration of AgNO3

Liquid culture was prepared from E. coli O104:H4 isolate by inoculation into nutrient broth and incubation at 37 °C for 24 h. This overnight culture was centrifuged at 4000 rpm for 10 min. The supernatant was discarded, and pellet was washed in pyrogen free water. The washing process by centrifugation was repeated for three times. Pellet was resuspended in 5 mL pyrogen-free water. The suspension was adjusted to 0.5 McFarland. The bacterial suspension (1.0 mL) was added to sterile centrifuge tubes containing 2 mL solution of AgNO3 (3.0 mL total volume) at increasing final concentrations of AgNO3 (1.5, 3, 6, 12, 18 ppm) and the mixture was incubated overnight at 37 °C under dark conditions for 6 h. Silver-treated bacteria were centrifuged at 4000 rpm for 10 min and the pellet was re-suspended in pyrogen free water. The supernatant was filtered using 0.2 µm syringe filter. Then, 2 mL of the supernatant was added to 1 mL of fresh viable E. coli O104:H4 culture and 2 mL of pellet suspension was added to 1 mL of the fresh viable E. coli O104:H4 culture. Both supernatant and pellet suspension containing cultures were incubated overnight at 37 °C. Mixtures were serially diluted (10-fold dilution) in saline and pour–plated. The plates were incubated at 37 °C for 24 h, the bacterial colonies were counted and compared to number of colonies of fresh viable E. coli O104:H4 culture (not treated) [25].

The effect of E. coli O104: H4 treated with heat towards viable bacteria was performed by autoclaving the bacterial broth at 121 °C for 15 min, and then 2 mL of autoclaved bacterial broth were added to 1 mL of fresh viable E. coli culture for 24 h [25].

Silver-killed cells of E. coli O104: H4 were centrifuged to separate them from their solution and then re-suspended in 1.0 mL saline. TEM was used to characterize the shape of the silver-killed cells. A drop of bacterial suspension was placed onto carbon-coated copper grid and this was dried in the air to get images for TEM analysis by electron microscope (Hitachi, Japan). All experiments were performed under sterile conditions and in triplicate [26].

Agar well diffusion assay was used to test the effect of both silver-killed cells and its supernatant against E. coli O157:H7, MRSA, and MDR Ps. aeruginosa isolates.

Fresh viable E. coli O104:H4 was used to inoculate tubes containing 8 mL of MHB with silver nitrate solution of a concentration of 6 ppm, pellet suspension and supernatant. A tube with MHB alone was inoculated as a control. Tubes were incubated at 37 °C with gentle shaking for defined times (0,1, 15, 30, 60, 90 and 120 min). One ml of bacterial suspension was withdrawn and serially diluted in MHB. Twenty-five microliters of each dilution were spotted on Mueller Hinton agar plates. The test is repeated in triplicate. The number of colony forming units (CFU/mL) was determined and averaged after overnight incubation of the plates at 37 °C [27].

2.9. Antimicrobial Efficacy and Durability of Silver Killed Bacteria And Supernatant Against the Tested Strains

Silver-killed E. coli O104:H4 bacteria and supernatant prepared using AgNO3 at a concentration of 6 ppm were tested for their efficacy and durability against E. coli O104:H4, E. coli O157:H7, MDR Ps. aeruginosa and MRSA. The tested agents were prepared and stored in dark at 4 °C. The test is repeated in triplicate (zones of inhibition are averaged). First, baseline line zone was determined for each of the tested agents after their preparation. Then, the tested agents were stored in dark and tested for their antimicrobial activity after 1, 2, 6, 16, 22, 34, 40 days using agar well diffusion method. Zones of inhibition were measure and recorded as diameters in mm [28].

Each experiment was done in triplicate. Data was represented as mean ± SD. One-Way ANOVA was employed to evaluate any significant difference between values obtained without the tested agents (controls) and those observed in the presence of silver-killed bacteria and supernatant. Differences were done using SPSS, 17 statistical software (SPSS Inc., Chicago, IL, USA).

Silver-killed bacteria can act as effective weapons against viable bacteria which are present in their environment or media. This is, as literature suggests, by acting as a reservoir for adsorbed silver nanoparticles. This phenomenon may play an important role in the management of wound infections using dressings containing silver and for the disinfection of water using silver.

The authors received no financial support for the research or publication of this article. 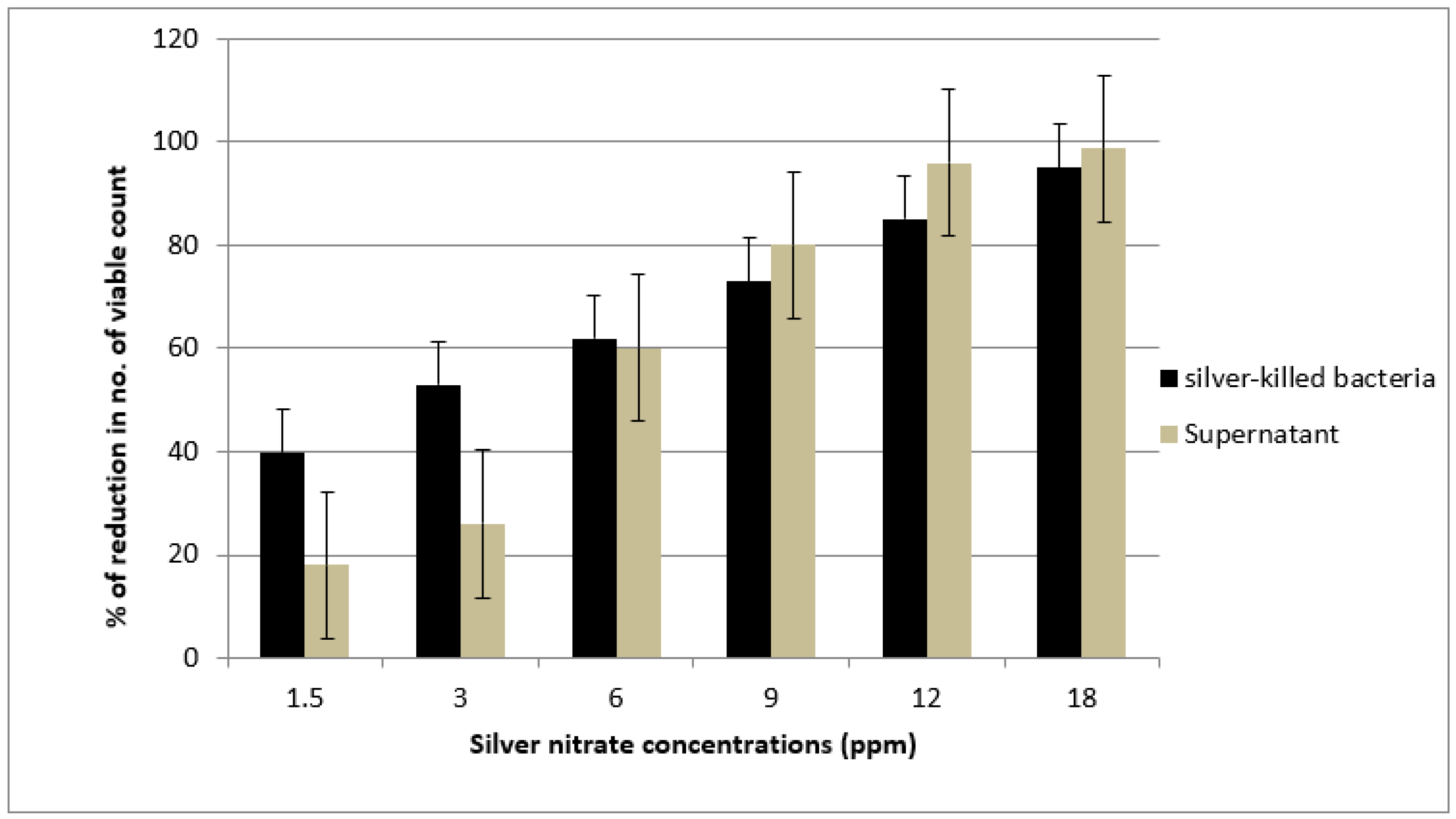 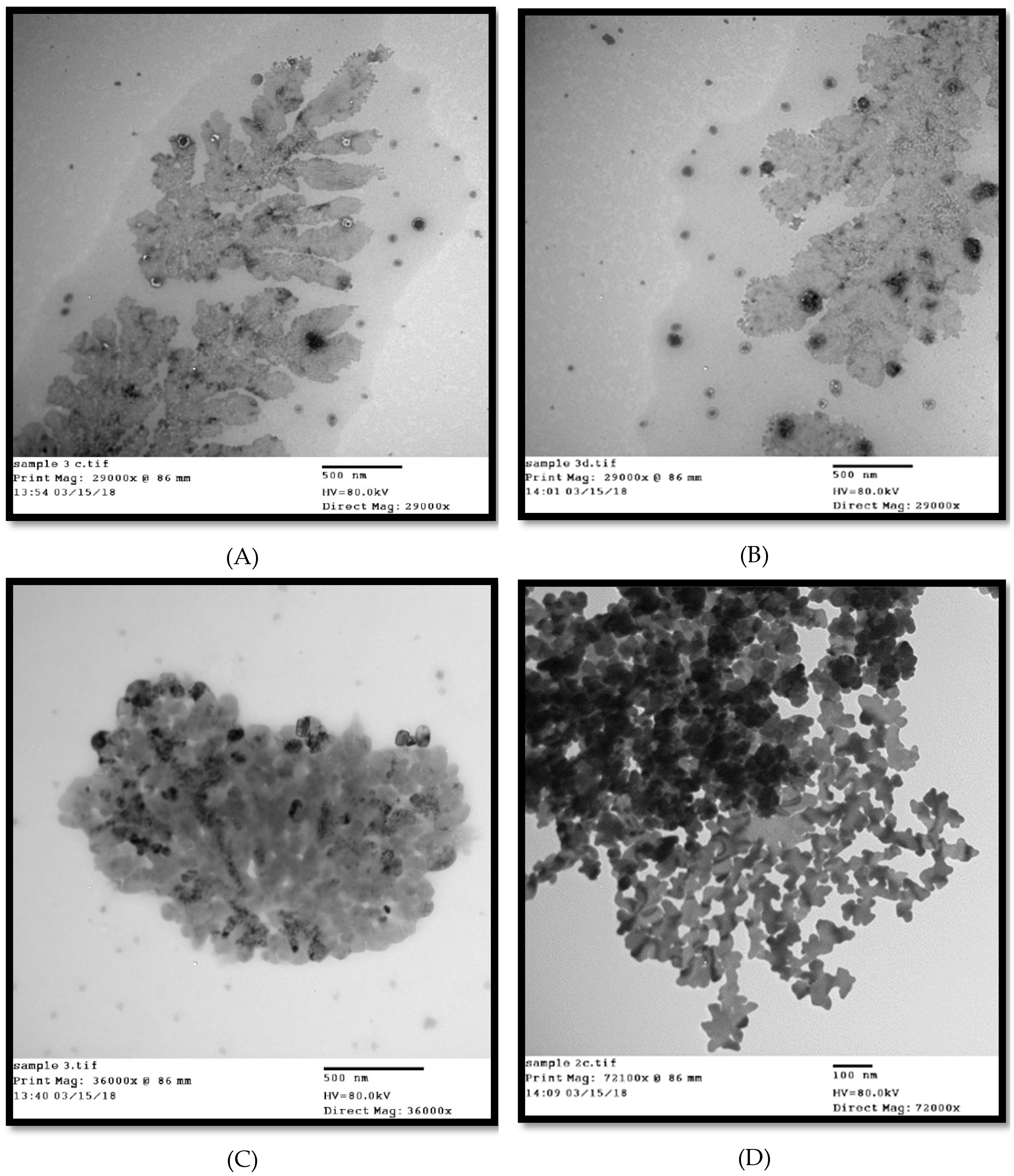 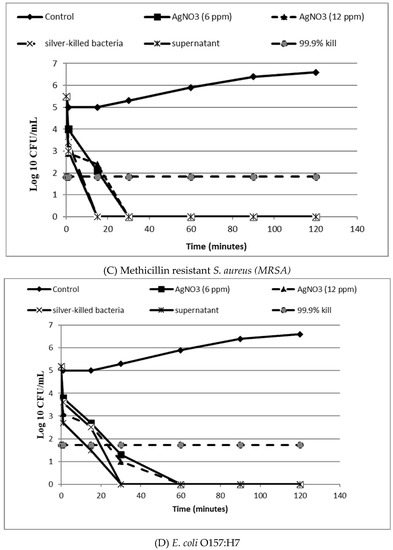 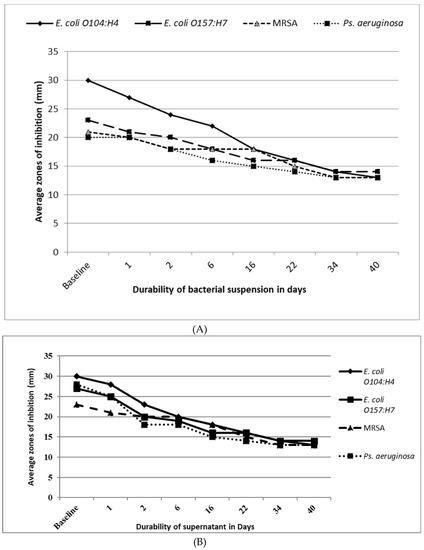 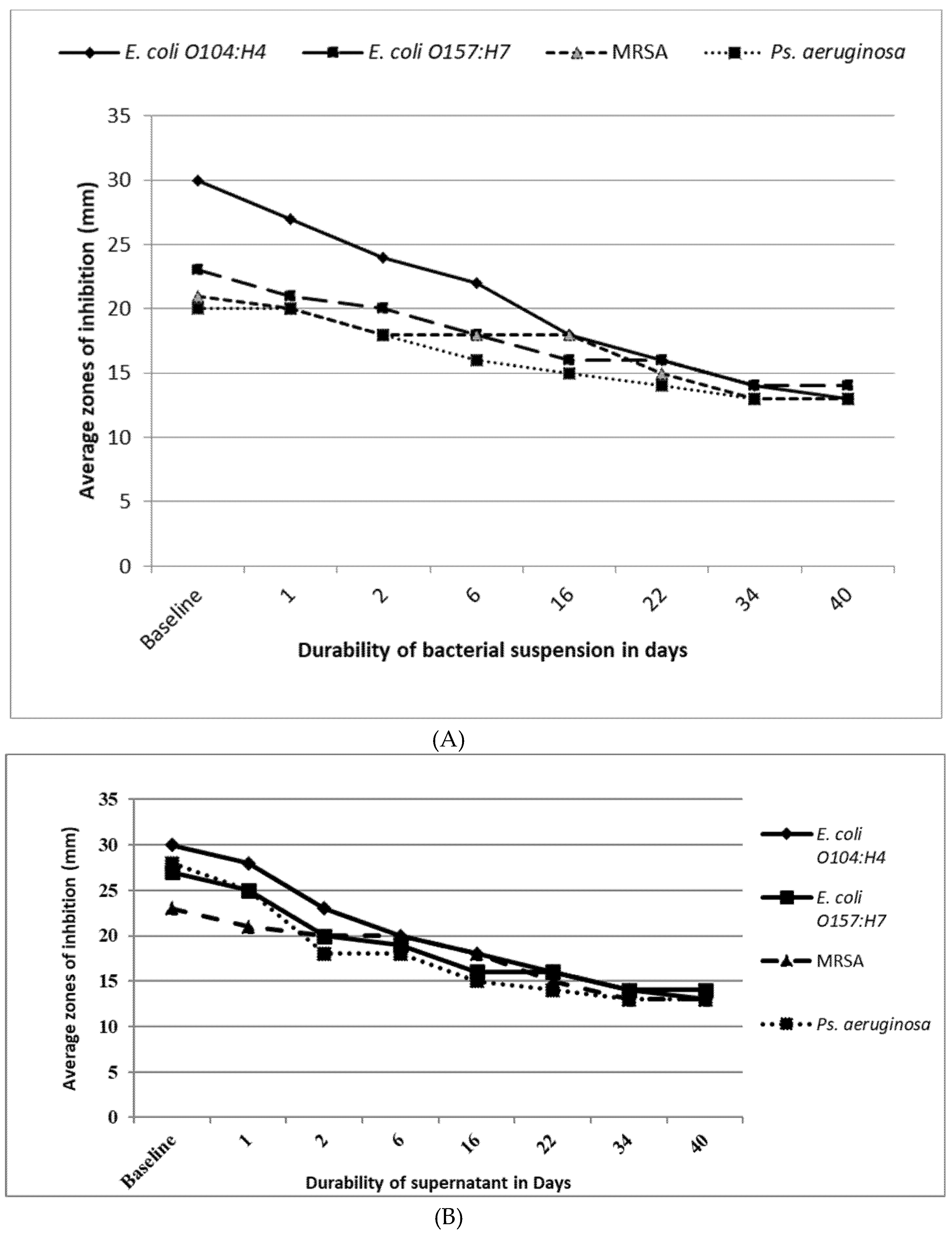