White-nose syndrome (WNS) in bats, caused by Pseudogymnoascus destructans (Pd), is a cutaneous infection that has devastated North American bat populations since 2007. At present, there is no effective method for controlling this disease. Here, we evaluated the effect of propolis against Pd in vitro. Using Sabouraud dextrose agar (SDA) medium, approximately 1.7 × 107 conidia spores of the Pd strain M3906-2/mL were spread on each plate and grown to form a consistent lawn. A Kirby–Bauer disk diffusion assay was employed using different concentrations of propolis (1%, 2%, 3%, 4%, 5%, 10%, 15%, 20%, 25%), in plates incubated at 8 °C and 15 °C. At 8 °C and 15 °C, as the concentration of propolis increased, there was an increasing zone of inhibition (ZOI), reaching the highest degree at 10% and 25% concentrations, respectively. A germule suppression assay showed a similar effect on Pd conidia germination. A MALDI-TOF-MS analysis of propolis revealed multiple constituents with a potential anti-Pd activity, including cinnamic acid, p-coumaric acid, and dihydrochalcones, which could be further tested for their individual effects. Our study suggests that propolis or its individual constituents might be suitable products against Pd.
Keywords: propolis; white-nose syndrome; Pseudogymnoascus destructans; anti-Pd activities; anti-fungal; fungal infection in bats propolis; white-nose syndrome; Pseudogymnoascus destructans; anti-Pd activities; anti-fungal; fungal infection in bats

White-nose syndrome (WNS) has devastated many eastern North American bat populations since 2007, killing more than six million bats [1]. Since the first observations of mortality at a cave near Albany, New York in 2007, WNS has spread to 31 US states and 5 eastern Canadian provinces [2], most recently appearing in 2017 in the states of Mississippi, Texas, and Washington, USA [2]. The etiological agent of WNS is Pseudogymnoascus destructans (Pd), a psychrophilic fungus that grows optimally on hibernating bats at temperatures between 12–16 °C [3].
Pseudogymnoascus destructans (Pd) preferentially infects thinly haired regions on the skin of hibernating bats, and is able to degrade collagen and invade living tissues [4]. Hibernating bats lower their body temperature to near-ambient temperature during torpor bouts [5]. During hibernation, bats generally seek microclimates that remain above freezing and can be as warm as 15 °C or more for some species [5,6,7], and are relatively high in humidity. Bats generally adapt to the temperature of their surroundings to maximize their energy budget [8]. The similarity between the preferred hibernating environment of bats and the optimal growth condition of the Pd pathogen is a major contributor to the WNS epidemic. Pd infection disrupts the normal torpor and arousal cycles of hibernating bats [9], causing premature depletion of fat reserves, in addition to electrolyte imbalances and dehydration, resulting in mortality [10]. Bats are essential components of both the natural, agricultural, and other human ecosystems [11]. They play important roles in maintaining ecosystem stability, consume insects that are human or animal pests, and redistribute nutrients through their guano [11,12]. To reduce bat mortality and eliminate the likelihood of species extinction by Pd, it is essential to identify effective methods to control Pd.
In regard to investigations of anti-Pd agents, several recent studies have identified putative anti-Pd agents, including (i) volatile compounds produced by the bacteria Rhodococcus rhodochrous DAP96253 [13] and by Pseudomonas spp. isolated from bat wings [14]; (ii) cold-pressed, terpeneless orange oil (CPT) [15]; and (iii) sesquiterpene trans, trans-farnesol (Candida albicans quorum-sensing compound) [13]. Our goal was to identify alternative or additional potent treatments against Pd using substances likely to be unharmful to cave environments and to bats.
Propolis is a resinous substance produced by honey bees in beehives throughout the year [16,17]. Stingless bees are widely spread, especially in the tropical and subtropical areas of the world. Propolis produced from such bees possesses therapeutic properties [18], including antimicrobial, antitumor [18], antioxidant [19], anti-stimulant [20], anti-inflammatory [21,22,23,24], antiulcer [22,23,24,25], and anti-HIV activities [25]. For instance, two compounds, cardanol and cardol, isolated from a Thai propolis, possessed antiproliferation and cytotoxicity against carcinomas originated from the lungs, the liver, and the colon [26]. Khacha-ananda et al. 2016 [19] found that ethanolic extracts of propolis (EEP) obtained from Chiang Mai, Thailand, exhibited higher antioxidant activity than EEP from other sources. In 2005, Hu et al. [23] showed that both the ethanol and the water extracts of propolis had anti-inflammatory activities in mice and rats [21]. Significant anti-HIV activities [EC(50) < 0.1 µg/mL, TI > 186] resulted from moronic acid (triterpenoids) isolated from a Brazilian propolis [25]. Additionally, because of its antiviral, antibacterial, and antifungal activities, propolis has been used in human healthcare to treat colds, wounds, ulcers, and rheumatism [27,28]. Propolis was found to exhibit antagonistic effects against a number of Gram-positive cocci and rods [29]. A recent study by Shimizu et al. 2011 [30], showed that the ethanol extract of propolis from Brazil had antiviral activities. When administered orally or cutaneously to herpes simplex virus type 1 (HSV-1)-infected mice, the ethanol extract of propolis significantly reduced the herpetic skin lesions and enhanced delayed-type hypersensitivity [30]. Silici et al. 2006 [31] reported that propolis had antifungal activities against 15 strains belonging to four species of yeasts isolated from patients with superficial mycoses.
Traditionally, studies on the medicinal benefits of propolis have attributed its effects to its complex composition and to the synergistic effects among its complex chemical constituents [32,33]. Another emerging theme is that the chemical composition of propolis is highly dependent on the geographical location, botanical origin [34], and bee species [35]. In different ecosystems, there are different plant species, and these plants can vary in their secretion and exudates, and therefore provide diverse food sources to bees [16]. Thus, the variability in chemical composition among propolis from different sources can be large. For example, propolis produced in the Pacific region contains geranyl flavanones which are also a typical component for the African propolis [17]. The green propolis of Brazil has prenylated phenylpropanoids (e.g., artepillin C) and diterpenes as major components [17], while the propolis of temperate regions consists of flavonoids lacking the B-ring substituents, namely, chrysin, galangin, pinocembrin, pinobanksin, caffeic acid phenethyl ester [36]. These unique mixtures of constituents from different sources likely contribute to the observed multiple effects including not only the broad biological effects described above, but also the inhibition of nuclear factor κ-B, cell proliferation, cell arrest, and apoptosis [17,36].
In this study, we tested the effectiveness of the commercially available propolis purchased from Natural Factors in Coquitlam, British Columbia, Canada on the WNS agent Pd. We investigated the in vitro antagonistic properties of propolis against Pd. We also tested the inhibition of germule development when incubated with propolis. This study is the first investigation of the anti-Pd activities of propolis.

2.2. Suppression of Germination of Pd Spores

Pd spores treated with 1% propolis revealed a complete deformation (Microscopic images at 10× and 40×, Figure 3(iii,iv)) in vitro when compared to the untreated spores that exhibited elliptical shapes, typical of Pd spores. (Figure 3(i,ii)).

One hundred microliter of isolated Pd spores (1 × 107 spores/mL) were mixed with 250 mL of Sabouraud dextrose agar (SDA) media supplemented with chloramphenicol (34 mg/L) at 50 °C (Fisher Scientific, Fairlawn, NJ, USA) to avoid bacterial contamination. Approximately 20–22 mL of the mixture was poured into each of the 85 mm petri plates. Plates were air-dried in a laminar airflow hood. Eight millimeter (diameter) paper discs (Toyo Roshi Kaisha Ltd., Tokyo, Japan) were soaked in different concentrations (1%, 2%, 3%, 4%, 5%, 10%, 15%, 20%, and 25%) of commercially available propolis (65% extract) (Natural Factors, Coquitlam, BC, Canada), air-dried, and placed in the center of each seeded SDA medium plate along with sterile water and anhydrous ethanol (<0.005% water) (Sigma Aldrich, St. Louis, MO, USA); the latter two conditions were used as controls. Anhydrous ethanol was tested since it was used as a solvent to dissolve propolis in all dilutions (as per the manufacturer’s instructions). All plates with different propolis concentrations were incubated at 8 °C or 15 °C, including control plates, in duplicate. Anti-Pd activities were identified as zones of inhibition around the impregnated paper discs, and the diameters were measured in millimeters with an electronic Vernier caliper (Guilin, Guangxi, China). Notably, the measurement of the diameters for the zones of inhibition were recorded on the 22nd and 15th day of incubation at 8 °C and 15 °C, respectively, since Pd spores germinated slower at 8 °C than at 15 °C. Each treatment was repeated four times. The bioassay plates were kept until the 60th day after the observation performed at the 22nd day.
To determine whether the concentrations of propolis differed in their inhibitory effects, we used a single-factor ANOVA to analyze the quantitative-zone-of-inhibition data. If an overall difference was found, all pairwise comparisons were made using the two-tailed t-test. Since there were 36 pairwise comparisons [9 concentrations × (9 − 1)/2 = 36] at each of the two temperatures, a Bonferroni correction was applied to the typical p value of < 0.05 considered statistically significant. The corrected p value was 0.05/36 = 0.0013888.

Sterile microscopic slides (24.5 × 76.2 mm) were layered with 600 µL of molten SDA (10%) at a temperature of 50 °C and premixed with 5 µL of Pd spores (1 × 107 spores/mL) and 5 µL of each of the indicated concentrations of propolis. Quadruplet slides were prepared for each of the propolis concentrations and were incubated in duplicate at 8 °C and 15 °C. The germination of the Pd spores was measured macroscopically by visualizing the white growth confluence of the Pd lawn, and microscopically by the Pd hyphal extension. Both macroscopic and microscopic images were acquired from slides on the 7th and 16th day of incubation. The microscopic images were taken using a DCM 130E digital camera for microscope (1.3 M pixels, CMOS chip) (AmScope, Irvine, CA, USA). The microscopic images were imported with the Scope Photo Software (AmScope, Irvine, CA, USA).

The chemical composition of propolis was determined using matrix-assisted laser desorption ionization time-of-flight mass spectrometry (MALDI-TOF-MS). The propolis sample consisted of 50% diluted propolis in methanol covered with 0.1020 M of α-cyano-4-hydroxy cinnamic acid (HCCA) in 1:4 (v/v) H2O/acetonitrile. A 1.0 µL diluted aliquot of the sample was first spotted on the plate and covered with 2.0 µL of matrix. The mass spectra were obtained using a bench-top Microflex MALDI-TOF MS from Bruker Daltonics® (Bremen, Germany) equipped with a pulsed nitrogen laser at 355 nm wavelength. The spectra were recorded from 40 to 2000 Da (positive mode), and from 100 to 400 Da (positive mode) using FlexControl 3.3 software (ion source 1: 19 kV; ion source 2: 15.5 kV; lens voltage: 9.45 kV; laser frequency: 60 Hz; pulsed ion extraction (PIE) delay: 120 ns). Other parameters are shown in Table 2. Mass gates of 400 m/z (positive mode) were set for all experiments. Individual mass spectra from each spot were acquired by averaging 350 laser shots. Data acquisition was set to automate, and the “random walk” movement was activated at 10 shots per raster during the sequence. The peak lists and intensities were calculated using the peak-picking centroid algorithm in FlexAnalysis 3.3 software.

We are thankful to the United States Fish and Wildlife Service (Cheeptham and Lausen’s Grant #F15AS00188) for funding. Our sincere appreciation also goes to Cori Lausen of the Wildlife Conservation Society Canada and Mark Rakobowchuk of TRU for their time and assistance in editing this manuscript. 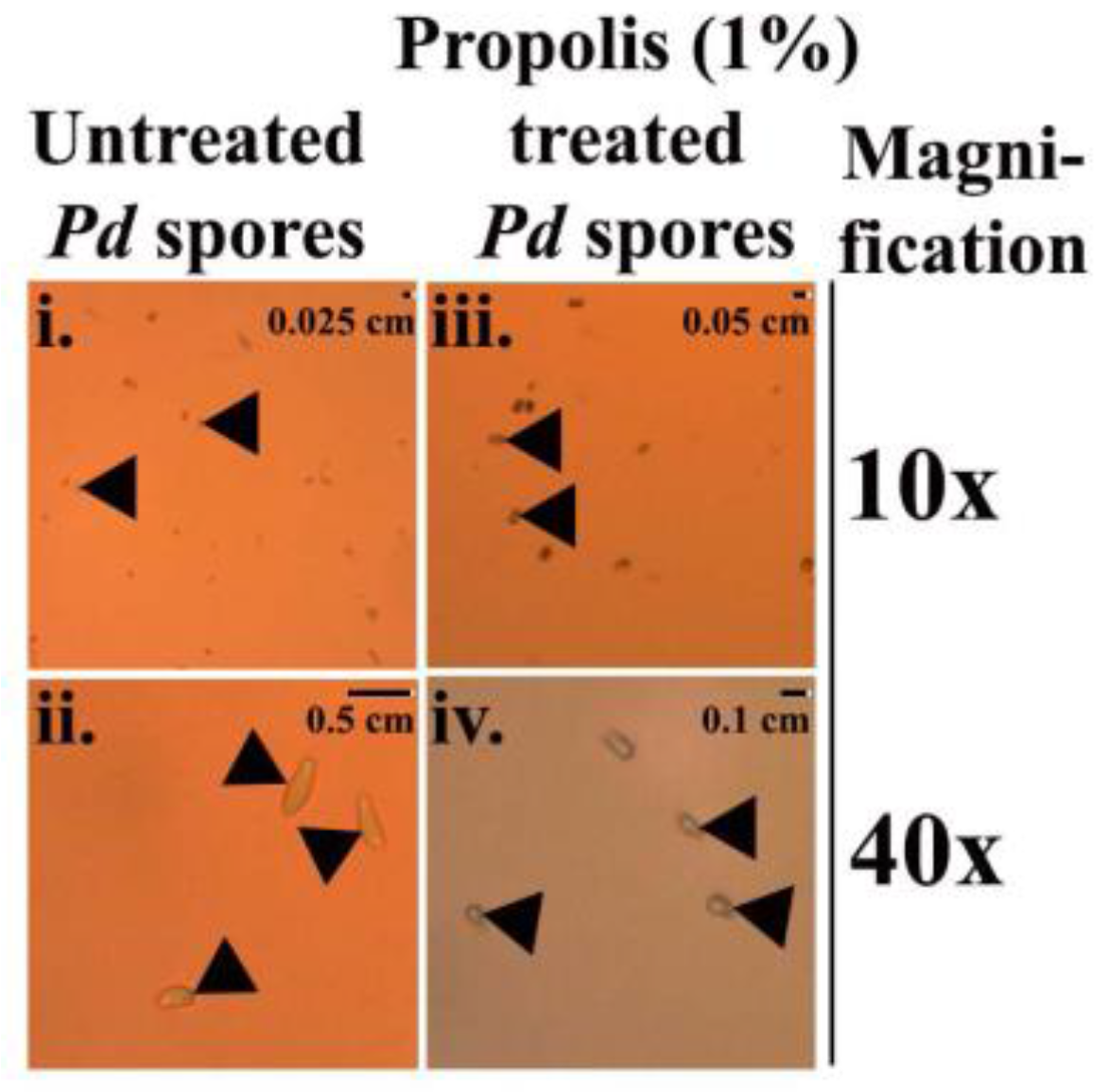 Table 2. Parameters of MALDI-TOF-MS.
Table 2. Parameters of MALDI-TOF-MS.
© 2017 by the authors. Licensee MDPI, Basel, Switzerland. This article is an open access article distributed under the terms and conditions of the Creative Commons Attribution (CC BY) license (http://creativecommons.org/licenses/by/4.0/).
We use cookies on our website to ensure you get the best experience. Read more about our cookies here.
Accept
We have just recently launched a new version of our website. Help us to further improve by taking part in this short 5 minute survey here. here.
Never show this again