White-nose syndrome (WNS) in bats, caused by Pseudogymnoascus destructans (Pd), is a cutaneous infection that has devastated North American bat populations since 2007. At present, there is no effective method for controlling this disease. Here, we evaluated the effect of propolis against Pd in vitro. Using Sabouraud dextrose agar (SDA) medium, approximately 1.7 × 107 conidia spores of the Pd strain M3906-2/mL were spread on each plate and grown to form a consistent lawn. A Kirby–Bauer disk diffusion assay was employed using different concentrations of propolis (1%, 2%, 3%, 4%, 5%, 10%, 15%, 20%, 25%), in plates incubated at 8 °C and 15 °C. At 8 °C and 15 °C, as the concentration of propolis increased, there was an increasing zone of inhibition (ZOI), reaching the highest degree at 10% and 25% concentrations, respectively. A germule suppression assay showed a similar effect on Pd conidia germination. A MALDI-TOF-MS analysis of propolis revealed multiple constituents with a potential anti-Pd activity, including cinnamic acid, p-coumaric acid, and dihydrochalcones, which could be further tested for their individual effects. Our study suggests that propolis or its individual constituents might be suitable products against Pd. View Full-Text
Keywords: propolis; white-nose syndrome; Pseudogymnoascus destructans; anti-Pd activities; anti-fungal; fungal infection in bats propolis; white-nose syndrome; Pseudogymnoascus destructans; anti-Pd activities; anti-fungal; fungal infection in bats
►▼ Show Figures 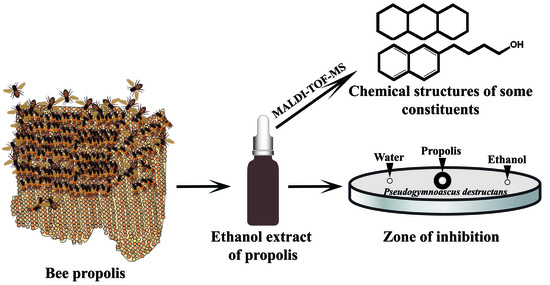