The food industry is constantly struggling with one of the most prevalent biofilm-forming and food-borne pathogenic bacteria, Campylobacter jejuni. Different approaches are used to control biofilms in the food production chain, but none is fully effective. In this study, we aim to produce and determine the chemical profile of essential oils (EOs), ethanolic extracts of flowers prior to distillation (EFs), and ethanolic extracts of post-distillation waste material (EWMs) from Lavandula × intermedia ‘Bila’, ‘Budrovka’ St Nicholas and ‘Budrovka’, which were further used to reduce C. jejuni intercellular signaling, adhesion, and biofilm formation, as well as to test their antioxidant activity. Glycosides of hydroxycinnamic acids were the major constituents of both types of lavandin ethanolic extract, while linalool, linalyl acetate, 1,8-cineol, and camphor were the major compounds found in lavandin EOs. Tested EOs showed the best antibacterial activity with a minimal inhibitory concentration of 0.25 mg/mL. Lavandin EFs proved more effective in reducing C. jejuni intercellular signaling and adhesion compared to lavandin EOs and EWMs, while lavandin EOs showed a slightly better effect against biofilm formation. Interestingly, the best antioxidant activity was determined for lavandin EWMs. A positive and moderate correlation was found between the reduction of C. jejuni intercellular signaling and adhesion, as well as between adhesion and biofilm formation. These findings mean novel bacterial targets are of interest for biofilm control with alternative natural agents throughout the whole food production chain. View Full-Text
Keywords: Campylobacter jejuni; biofilm; adhesion; intercellular signaling; lavandin formulations Campylobacter jejuni; biofilm; adhesion; intercellular signaling; lavandin formulations
►▼ Show Figures 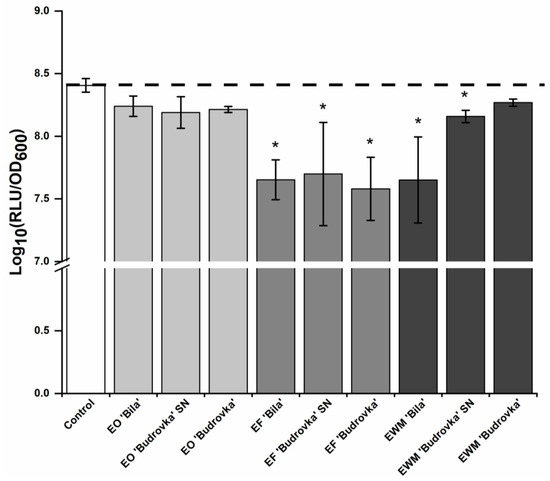