Regional Variations in Outpatient Antibiotic Prescribing in Germany: A Small Area Analysis Based on Claims Data

GePaRD is based on claims data from four SHI providers in Germany and includes information on persons who have been insured with one of the four participating SHI providers since 2004 or later [7,8]. Per data year, GePaRD covers approximately 20% of the general population, and all geographical regions of Germany are represented. Demographic data include sex, age, and region of residence on the district level (see details below). Prescription data in GePaRD include all drugs prescribed by general practitioners or specialists in the outpatient setting that SHI providers have reimbursed. Prescriptions are coded according to the German modification of the WHO Anatomical Therapeutic Chemical (ATC) classification system (version as of May 2019 for this study).

We conducted cross-sectional analyses for the calendar years 2010 and 2018. We selected the year 2010 to describe changes over a longer period of time and also to complement and facilitate comparisons with previous research which was restricted to children [6]. The year 2018 was selected because it was the most current data year available for analyses. We only included persons insured for at least one day in each quarter of the respective year in both calendar years. Further, we only included persons with information on sex (female or male) and birth year. For both calendar years, we determined the prescription rate as the primary measure of interest, defined as the total number of prescriptions per population in the respective year (in “prescriptions per 1000 persons/year”, i.e., the total number of antibiotic prescriptions/total number of persons in the study population). We also assessed the prescription prevalence, defined as the proportion of persons with at least one antibiotic prescription among all persons in the study population (in “%”).

2.3. Assessment of Antibiotic Prescriptions and Region of Residence

For each person, we assessed outpatient antibiotic prescriptions based on the ATC codes J01 (“antibacterials for systemic use”) and P01AB01 (“metronidazole”), using the date of prescription to assign them to calendar years. According to the classification in pharmacological subgroups (ATC 3rd level), individual antibiotic agents were grouped into subgroups (Table S1).
For each person and separately for both calendar years, we determined the region of residence on the district level (“Kreise und kreisfreie Städte”). Since there have been changes in the classification of districts between 2010 and 2018—mainly because some districts were merged—we standardized all districts to the status of 2018. Accordingly, our analysis includes 401 districts.

We calculated the prescription rate overall for both calendar years and stratified by sex and age (individual years and age groups adapted from earlier studies [4]). For 2018, we also determined the proportional distribution of antibiotic prescriptions by antibiotic subgroup in the same strata.
To describe regional variations in antibiotic prescribing at the district level and over time, we determined the prescription rate in each district for children below school age (≤6 years), for children and adolescents combined (0–17 years), and for adults (≥18 years) for both calendar years. For the calendar year 2018, we additionally calculated the prescription prevalence. We first excluded districts with fewer than 100 eligible insured persons in the corresponding age group for the graphical presentation to ensure reliable coverage. As a result, 4 of the 401 districts had to be excluded. To classify districts with lower or higher antibiotic prescribing, we then categorized the remaining districts—according to the prescription rate or the prescription prevalence, respectively—into five classes using the Jenks natural breaks classification method, which automatically identifies jumps in continuous data values and objectively maximizes the differences between classes [9]. The natural breaks classification method seeks to arrange values into discrete classes so that the difference between each value and the class mean is minimized and the difference between the means of different classes is maximized. We chose this method to handle skewness in the distribution of district-level prescription rates and prevalences. Because of the large differences in antibiotic prescribing between minors and adults and between calendar years, the estimated prescription rates and prevalences were categorized separately for each age group and calendar year.
To account for differences in the sex and age structure of the study population in the different regions and calendar years, prescription rates and prescription prevalences were directly standardized according to age/sex (as appropriate). The reference population for standardization was the German population as of 31 December 2017.
In this study, the term “eastern Germany” refers to the federal states Brandenburg, Mecklenburg-Western Pomerania, Saxony, Saxony-Anhalt, and Thuringia—i.e., the states of the former German Democratic Republic (“East Germany”)—as well as Berlin in its entirety (Figure S1).
Jenks natural breaks were calculated using R (version 3.6.0; Vienna, Austria), package BAMMtools (version 2.1.7) [10]. Descriptive analyses were conducted using SAS (version 9.4; SAS Institute, Cary, NC, USA). Maps were created using R, package sf (version 0.9-8) [11], or QGIS (version 3.24.1) [12]; spatial data on districts and federal states were used from the Federal Agency for Cartography and Geodesy (BKG).

Figure 1 shows the proportional distribution of antibiotic prescriptions in the total population by antibiotic subgroup in 2018. The share of basic penicillins and cephalosporins, respectively, was ~40–50% and ~30–40% in children up to 14 years, then decreased to levels of ~20–30% (basic penicillins) and ~15–20% (cephalosporins) up to the age of 54 years, and was below 20% for both antibiotic subgroups at older ages. Macrolides/lincosamides had a share of 19–24% from 10–14 to 55–64 years. The share of fluoroquinolones was ≥8% from age 18 years onwards and reached 20% among persons aged 65 years or older. As shown in Table S3b,c, the patterns were similar in females and males with some exceptions, such as a higher percentage of nitrofurantoin/fosfomycin/nitroxoline in females than in males (overall 12% vs. 1%). Table S3a provides detailed information on the distribution within antibiotic subgroups among both sexes, showing that prescribing basic penicillins was mainly limited to amoxicillin and phenoxymethylpenicillin, and, for cephalosporins, it was limited to second- and third-generation cephalosporins.

The SARA project—on which this publication is based—was commissioned by the Federal Ministry of Health (grant number ZMVI1-2519FSB115).

In Germany, the utilization of health insurance data for scientific research is regulated by the Code of Social Law. All involved health insurance providers as well as the Federal Office for Social Security and the Senator for Health, Women, and Consumer Protection in Bremen as their responsible authorities approved the use of GePaRD data for this study. According to the Ethics Committee of the University of Bremen studies based on GePaRD are exempt from institutional review board review.

Informed consent for studies based on claims data is required by law unless obtaining consent appears unacceptable and would bias results, which was the case in this study.

As we are not the owners of the data, we are not legally entitled to grant access to the data of the German Pharmacoepidemiological Research Database. In accordance with German data protection regulations, access to the data is granted only to BIPS employees on the BIPS premises and in the context of approved research projects. Third parties may only access the data in cooperation with BIPS and after signing an agreement for guest researchers at BIPS.

The authors would like to thank all statutory health insurance providers which provided data for this study, namely AOK Bremen/Bremerhaven, DAK-Gesundheit, Die Techniker (TK), and hkk Krankenkasse. They would also like to thank Alina Ludewig and Inga Schaffer for the statistical programming of the data and Heike Gerds for proofreading the final manuscript (all with Leibniz Institute—BIPS).

O.S., C.B., B.K., O.R. and U.H. are working, and, in the case of SG and MA, worked at an independent, non-profit research institute, the Leibniz Institute for Prevention Research and Epidemiology—BIPS. Unrelated to this study, BIPS occasionally conducts studies financed by the pharmaceutical industry. Almost exclusively, these are post-authorization safety studies (PASS) requested by health authorities. The design and conduct of these studies as well as the interpretation and publication are not influenced by the pharmaceutical industry. The study presented was not funded by the pharmaceutical industry. The Federal Ministry of Health specified the research question and the main content of the study concept and regularly participated in discussions on the implementation of the study. The authors were independent in the specific design, execution, interpretation, and writing of the study. The Federal Ministry of Health has authorized the publication of the results. B.S. and C.J. declare no conflicts of interest. 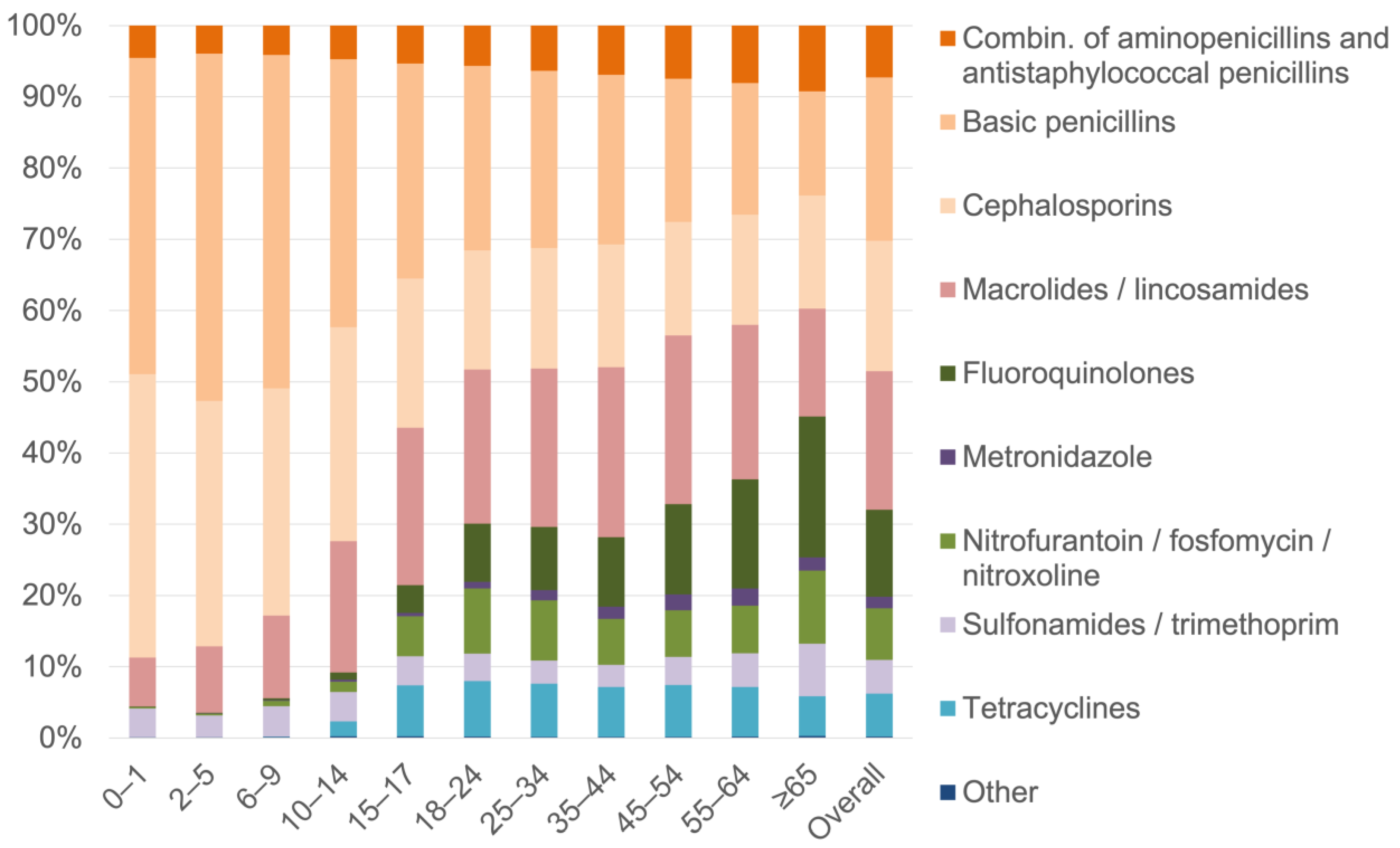