The management and effectiveness of the treatment of Helicobacter pylori infection are heterogeneous worldwide, despite the publication of international consensus conferences and guidelines, which have been widely available for years. The aim of the study was to describe the clinical management and the eradication rates in a region of Southern Europe (Spain). Between 2010 and 2019, we conducted a retrospective analysis of patients with H. pylori infection attended by gastroenterologists in two defined areas of the National Health System in Aragón. We compared the appropriateness of therapies according to guidelines, and described the effectiveness of each treatment. A total of 1644 penicillin non-allergic patients were included. The most prescribed therapy between 2010 and 2013 was the ‘classic’ triple therapy PCA (80%), whereas the ’concomitant’ therapy PCAM was chosen by 90% of the gastroenterologists in 2015. After 2016, the use of the quadruple bismuth-containing therapy in a single capsule (Pylera®) quickly increased, representing almost half of the overall prescriptions in 2019. Throughout the decade, adherence to guidelines was 76.4% and global efficacy was 70.7% (ITT). Triple therapies’ eradication rates were lower than 70% (ITT), whereas eradication rates with quadruple therapies achieved or were over 80% (ITT). In conclusion, despite the use of quadruple therapies and optimized treatments, the effectiveness of H. pylori management in daily clinical practice is far from the target of 90%. View Full-Text
Keywords: Helicobacter pylori; peptic ulcer; gastric neoplasms; treatment; efficacy; management; trends; clinical practice Helicobacter pylori; peptic ulcer; gastric neoplasms; treatment; efficacy; management; trends; clinical practice
►▼ Show Figures 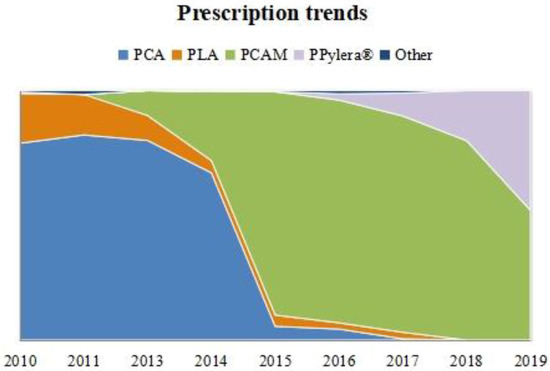