In Silico Analysis of Extended-Spectrum β-Lactamases in Bacteria

:
The growing bacterial resistance to available β-lactam antibiotics is a very serious public health problem, especially due to the production of a wide range of β-lactamases. At present, clinically important bacteria are increasingly acquiring new elements of resistance to carbapenems and polymyxins, including extended-spectrum β-lactamases (ESBLs), carbapenemases and phosphoethanolamine transferases of the MCR type. These bacterial enzymes limit therapeutic options in human and veterinary medicine. It must be emphasized that there is a real risk of losing the ability to treat serious and life-threatening infections. The present study aimed to design specific oligonucleotides for rapid PCR detection of ESBL-encoding genes and in silico analysis of selected ESBL enzymes. A total of 58 primers were designed to detect 49 types of different ESBL genes. After comparing the amino acid sequences of ESBLs (CTX-M, SHV and TEM), phylogenetic trees were created based on the presence of conserved amino acids and homologous motifs. This study indicates that the proposed primers should be able to specifically detect more than 99.8% of all described ESBL enzymes. The results suggest that the in silico tested primers could be used for PCR to detect the presence of ESBL genes in various bacteria, as well as to monitor their spread.
Keywords:
ESBL; antibiotic resistance; bacteria; PCR; primer

The mechanisms that bacterial pathogens have developed to fight antibiotics are many, one of them being production of enzymes degrading particular antibacterial agents. In case of β-lactam antibiotics, the enzymes are β-lactamases. To date, more than 7000 β-lactamases have been described in the Beta-Lactamase DataBase (BLDB) [1], which have different characteristics in terms of their substrate specificities. A special group is made up of β-lactamases with an extended spectrum of activity (extended-spectrum β-lactamases, ESBLs), which can inactivate broad-spectrum β-lactam antibiotics (e.g., penicillins, cephalosporins and monobactams). These enzymes are classified into Ambler molecular classes A and D; within the Bush-Jacoby-Medeiros classification system, they belong to groups 2be and 2d. While a common feature of class A ESBLs is their sensitivity to the activity of inhibitors such as clavulanic acid, sulbactam and tazobactam, class D β-lactamases (oxacillinases; OXA) are resistant to them. Furthermore, class C ESBLs have also been described (e.g., ADC). Some may also hydrolyze carbapenems, like the chromosomally encoded ADC-68 enzyme described in Acinetobacter baumannii (A. baumannii), whose R2 and C-loops allow better accommodation of carbapenems [2]. Moreover, weak hydrolytic activity against carbapenems was also described for some other variants such as ACT-1, ACT-28, CMY-2 or CMY-10 (AmpC type β-lactamase) [3,4].
Regarding OXA enzymes, an OXA-23 subfamily variant (OXA-146 with an alanine duplication at position 220) possessing both ESBL and carbapenem-hydrolyzing class D β-lactamase properties has been described [5]. Recently, two novel ESBL genes probably associated with small mobilizable plasmids, named blaRSA1 and blaRSA2, have been found in Indian river sediments, the latter also showing weak carbapenemase activity [6]. In addition, increased carbapenem resistance may be observed due to the production of ESBL enzymes if some secondary resistant mechanisms such as porin loss are present [7].
A great proportion of ESBLs are TEM (Temoneira class A extended-spectrum β-lactamase) or SHV (sulfhydryl variant of the TEM enzyme) enzyme derivatives. However, the most widespread enzymes are CTX-M (cefotaxime-hydrolyzing β-lactamase–Munich) whose production and dissemination rates have increased significantly since the mid-1990s [8]. Newly discovered and, in terms of occurrence, unusual class A ESBL enzymes include BEL, BES, GES (Guiana extended-spectrum β-lactamase), PER, VEB, SFO and TLA β-lactamases. In addition, the ESBL phenotype has been reported in other groups of β-lactamases such as CARB and L2. Additional minor ESBL types, such as FONA, BPU and YOC, have also been recently identified [9,10,11]. An interesting example of the minor ESBL group is SFO-1 encoded by a plasmid which includes the ampR regulatory gene, which allows for β-lactamase induction in a manner similar to class C β-lactamases. Minor ESBL enzymes are rare but often can associate with resistance genes against other antibiotics such as aminoglycosides or quinolones [12,13,14].
Many ESBL genes have been identified as a source of acquired resistance, but further studies show that ESBLs also occur naturally in clinically relevant pathogens and in environmental species. For example, many chromosomally encoded and naturally occurring ESBLs, such as CSP-1, KLUA-1, KLUC-1, OXY-1 RAHN-1 and SGM-1, have been described in various bacteria, although their role in phenotypic resistance is small [15,16]. Other enzymes with the ESBL phenotype include chromosomally encoded metallo-β-lactamases (MBLs), HMB-1, as well as KHM-1 found in multidrug-resistant bacteria [17].
GES enzymes were first classified as ESBLs due to a large number of hydrolyzable substrates including penicillins and cephalosporins with an extended spectrum. Since GES enzymes hydrolyzed, to a lesser extent, imipenem as well, they were also included among group 2f carbapenemases. Genes encoding this enzyme family can be located in integrons on plasmids. Even though they are rare, there have been reports about their presence worldwide [18].
Most SHV enzymes with an extended spectrum are derived from SHV-1 with differences in one or more amino acids; this small change is sufficient to create an extended spectrum. In particular, it is the G238S or E240K substitutions, with a serine residue being responsible for ceftazidime hydrolysis and a lysine residue for cefotaxime cleavage (both third-generation cephalosporins) [12]. Carbapenems do not belong to the hydrolytic profile of SHV enzymes, but there was a clinical isolate of Klebsiella pneumoniae (K. pneumoniae) with low sensitivity to some extended-spectrum cephalosporins as well as to imipenem. Subsequently, it has been found that a β-lactamase variant of SHV-1 with amino acid change A146V, designated SHV-38, is responsible for reduced imipenem sensitivity. Genes encoding SHV-38 are located on chromosomes, which means that it is the first SHV chromosomal enzyme with an extended spectrum of hydrolysis [19]. CTX-M enzymes do not have the ability to hydrolyze carbapenems. However, relatively recently identified CTX-M-33, a derivative of the globally widespread enzyme CTX-M-15 differing only in one amino acid substitution (N109S), exhibited the ability to hydrolyze meropenem. This property results from the substitution of N109S and strong selection of the antibiotic [20].
Enterobacteriaceae members are the main ESBL producers and they have mainly been recorded in hospital and community environments. However, the presence of ESBL producers (mainly CTX-M-15) has also been shown in foodstuffs of animal origin (e.g., cow’s milk, dairy products, chicken), suggesting possible transfer through the food chain [21,22]. In addition, an increasing number of ESBL-producing enterobacteria isolated from water environments have been observed [23]. In this case, a total of 10 ESBL-positive isolates [nine Escherichia coli (E. coli) and one K. pneumoniae] were identified in four well waters out of 100. ESBL genotyping revealed that CTX-M-15 was present nine times and CTX-M-27 was produced once. This and many other studies suggest that, for example, ESBL-producing enterobacteria in rural waters can spread to animals and humans via drinking water.
In view of the growing clinical importance of ESBL enzymes, their detection is also necessary in routine microbiological practice. The present study was concerned with (1) in silico analysis of ESBL enzymes, and (2) designing primers serving to detect all described ESBL genes.

2.1. In Silico Analysis of ESBL Enzymes

2.2. Detection of ESBL-Positive Bacteria with PCR

A total of 49 different types of ESBLs were analyzed in this study, including 1438 β-lactamase genes, of which only 624 enzymes had ESBL phenotype based on BLDB database and literature search. There were 42 members of class A β-lactamases (e.g., CARB, CTX-M, GES, OXY, PER, SHV, TEM, VEB), two members of the class C β-lactamase family (ADC and YOC), two gene families of the subclass B1 (HMB and KHM), and three members of class D β-lactamases (BPU, CDD and OXA; 5 OXA subgroups, OXA-18 and OXA-45; Table 3). In case of the most numerous groups of ESBL enzymes (CTX-M, SHV, TEM), there were 216, 199 and 199 variants of these enzymes with GenBank accession numbers, respectively. The CTX-M enzymes were subclassified based on similarity of amino acid sequences into 5 groups (CTX-M-1-like, CTX-M-2-like, CTX-M-8-like, CTX-M-9-like and CTX-M-151-like). A total of 58 specific primer pairs for ESBL detection were designed (Table 3) in silico using Primer3 (Geneious, Biomatters). The primer-BLAST results showed that these primers could detect all or almost all allelic variants of these so far described types of enzymes that are commonly found in bacteria.

Homologous regions in nucleotide sequences were used for designing primers with Primer3 (Geneious Prime) with the following requirements: an optimal melting temperature of 52–60 °C, a GC content varying from 40% to 60%, an optimal oligo length between 17 and 22 base pairs, and an amplification product size of 225 to 820 base pairs. All the oligonucleotides were tested in silico for hybridization with ESBL genes contained in the BLDB database. The primer specifications are listed in Table 3.

The present study reports 58 in silico and in vitro tested primer pairs for PCR assay that may be able to distinguish 99.8% of ESBL-producing bacteria. These may be part of diagnostic tests for the detection of observed resistance genes in bacterial pathogens. Such diagnostic tests can be used for early detection, monitoring and dissemination of ESBLs, thus contributing to reducing the spread of ESBL-positive bacteria, adequate antibiotic treatment and reducing health care costs. 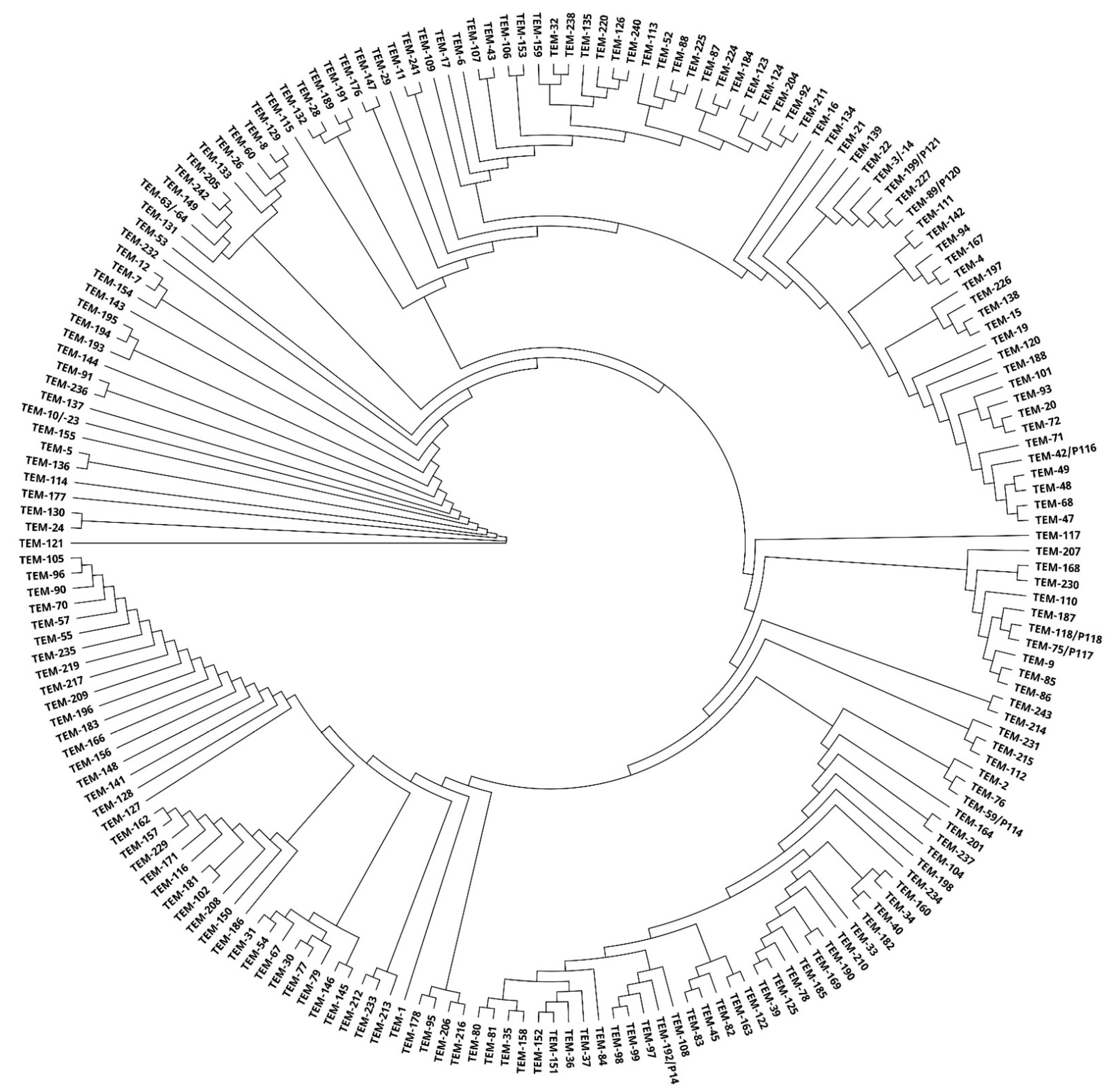