The Effects of Antibiotics for Helicobacter pylori Eradication or Dapsone on Chronic Spontaneous Urticaria: A Systematic Review and Meta-Analysis
Next Article in Special Issue

The Spectrum of Antimicrobial Activity of Cyadox against Pathogens Collected from Pigs, Chicken, and Fish in China

Third-generation cephalosporin-resistant Enterobacterales (3GCRE) are spreading worldwide [1]. Resistance is mainly due to the production of plasmid-mediated extended-spectrum β-lactamases (ESBLs) and AmpC β-lactamases, as well as the hyper-production of chromosomal Amp-C β-lactamases [2]. In human medicine, infections caused by 3GCRE are often associated with a delay in the initiation of appropriate antibiotic therapy, and therefore with worse clinical outcomes [3], since delays in the initiation of appropriate therapy are the strongest modifiable independent predictor for mortality in adult inpatients with severe sepsis [4]. In well-designed analyses in humans, these infections were independently associated with higher mortality rates, increased hospital charges, and longer lengths of hospital stay (LOS) [3]. This was further demonstrated in high-risk human patients, where infection with ESBL-producing Enterobacterales (ESBL-PE) has been shown to affect the clinical outcome by leading to an increased rate of inadequate initial therapy and a higher mortality [5]. A major concern regarding 3GCRE infections, and specifically ESBL-PE infections, is co-resistances to additional classes of therapeutical options, i.e., fluoroquinolones, aminoglycosides, trimethoprim-sulfamethoxazole. This further contributes to the epidemiological significance of these infections, both in human and in veterinary medicine [6,7].
Third-generation cephalosporins are critically important veterinary antimicrobials, as defined by the World Organization for Animal Health [8]. However, in recent years, there have been increasing reports pertaining to colonization and infections caused by 3GCRE among animals [9]. In equine medicine, reports of 3GCRE and in particular ESBL-PE infections are emerging, both in the community and in healthcare settings [10]. Shedding rates of 3GCRE by healthy horses in farms were reported worldwide, varying from 5.2% to 44% [11,12,13,14,15]. In three different studies, conducted in two different equine hospitals, shedding rates were shown to increase by 2.5–5.1-fold during hospitalization, implying that the nosocomial acquisition and spread of these resistant bacteria is common in certain veterinary facilities [11,16,17]. Moreover, there are numerous reports on various severe and invasive 3GCRE infectious syndromes among horses, e.g., skin and soft tissue infections, surgical site infections, upper respiratory tract infections, and bacteremia [18,19,20,21]. Furthermore, in horses, synovial infection with multidrug-resistant (MDR) bacteria was significantly associated with euthanasia [22]. However, the controlled scientific evidence, pertaining to risk factors and outcomes, which are independently associated with 3GCRE infections in equine medicine, is scarce.
In human medicine, the case–case–control methodology is considered today the “gold standard” in terms of analyzing risk factors/predictors in the field of antimicrobial resistance [23]. In this nested matched case-control design, every patient with a resistant pathogen is matched to a patient with a susceptible pathogen and to a patient with no pathogen (i.e., uninfected control). This methodology enables us to point out the specific predictors independently associated with the resistance determinant, while "diluting" the impact of the infection itself (i.e., by either a resistant or a susceptible strain). In veterinary medicine, as far as we know, there are no reported case–case–control studies in the field of antimicrobial resistance among animals. Our study aims were to conduct a matched case–case–control investigation, to study the predictors and outcomes, which are independently associated with 3GCRE infections among horses and donkeys.

During the study period, there were 1564 admissions of horses and 56 admissions of donkeys recorded at the Koret School of Veterinary Medicine, Veterinary Teaching Hospital (KSVM-VTH) (Table S1). Overall, 232 clinical specimens were submitted to the bacteriological lab, of which 32 specimens (14%), which were obtained from 29 animals, grew 3GCRE. The 29 patients with 3GCRE infection (“resistant cases”) were then matched to 29 patients with third-generation cephalosporin-susceptible Enterobacterales (3GCSE) infection (“susceptible cases”), and to 29 patients with no infection ("uninfected controls"). In total, 87 animals were enrolled (82 horses and 5 donkeys). The median age of the entire cohort was 2.75 years (range 0–24), the main breed was Arabian (48.3%, n = 42/87), 2.3% were geriatric (n = 2/87), 41.4% were neonates (n = 36/87), 10.3% were shelter residents (n = 9/87), 59.8% were females (n = 52/87), and out of 17 adult males, 64.7% were castrated (n = 11/17, i.e., 18 males were neonatal colts and were therefore not castrated and not included in the denominator for this calculation). Specifically for the donkeys, all five were adults, three were females and two were not castrated males. Eight percent (7/87) of all patients were hospitalized in the preceding three months, and the median length of stay was eight days (range: 2–181 days).

A retrospective matched case–case–control investigation pertaining to horses and donkeys of all age groups was conducted at the Koret School of Veterinary Medicine, Veterinary Teaching Hospital (KSVM-VTH), Israel, from June 2017 to January 2019. KSVM-VTH is the only veterinary teaching hospital in Israel and has a large animal department that could contain up to 40 hospitalized horses. The study was approved by the Internal Research Committee of the KSVM-VTH, Israel (Protocol KSVM-VTH/15_2015). The investigation consisted of three groups of patients: (1) 3GCRE-infected patients, (2) 3GCSE-infected patients, and (3) uninfected control patients. Only the first 3GCRE for each patient was included in the final analysis (i.e., patient-unique cases). Resistant cases were defined as patients suffering from an infection (i.e., no asymptomatic carriers were included) due to an Enterobacterales spp., non-susceptible to ≥1 third-generation cephalosporines (e.g., ceftriaxone, ceftiofur, cefpodoxime, ceftazidime). Susceptible cases were defined as patients suffering from an infection caused by Enterobacterales spp., susceptible to all third-generation cephalosporins. The uninfected control group consisted of patients without any infectious syndrome, and with no Enterobacterales isolated. A 3GCSE case and an uninfected control were matched to each 3GCRE case (1:1:1 ratio). The matching criteria (in order of importance [23]) included the following: animal species (equine vs. assinus), bacterial species, age group (neonate/adult/geriatric), clinical syndrome, and time at risk (i.e., days from admission date to culture date). For uninfected controls, the time at risk was captured as the total length of stay [23]. A neonate was defined as an animal ≤30 days old [58] and a geriatric animal was defined as age ≥20 years [59]. The date of event was captured as the beginning of the first clinical sign or symptom of infection that was associated with the culture of interest. Appropriate therapy was defined as per the in vitro susceptibilities report given from 48 hours prior to the culture date and up to five days following the culture date [60]. Days to appropriate therapy were defined as the number of calendar days from culture to the first dose of "appropriate" therapy (as defined above). Data were extracted from medical records, including demographic data, recent exposures to health care environments and settings, background conditions, medical treatments, invasive procedures (in the past three months), empiric antibiotic regimens (i.e., from two days prior to culture date to three days following culture date), main antibiotic regimens (i.e., 3–14 days following culture date) and outcomes. Immunosuppression was defined as ≥1 of the following: neutropenia, or glucocorticoids/chemotherapy exposures in the previous three months. One-year mortality data were captured following a telephone interview with the owner.

All study isolates were subjected to Vitek-2 (BioMérieux, Inc., Marcy-l’Etoile, France) for species identification and phenotypic susceptibility testing (AST-N270 Vitek 2 card). Susceptibility to ofloxacin and imipenem was determined by using the disc diffusion assay (Oxoid, Basingstoke, UK). ESBL production testing was determined according to the Clinical and Laboratory Standards Institute (CLSI) benchmarks and guidelines [61]. Isolates were defined as MDR based on established criteria [24].

Statistical analyses were performed using SPSS software (IBM; Version 24; SPSS Inc., Chicago, IL, USA). Data distribution was determined according to the skewness, kurtosis, and the Shapiro–Wilk’s test. Continuous variables were analyzed using t-tests or Mann–Whitney U-tests. Categorical variables were analyzed using the Fisher’s exact test or the Pearson chi-square test. In all analyses, p ≤ 0.05 indicated significance. Univariable and multivariable matched analyses determine the predictors of 3GCRE infection (vs. uninfected controls) and of 3GCSE infection (vs. uninfected controls). According to the case–case–control methodology, the eventual independent predictors of 3GCRE infection would be only those predictors associated with 3GCRE infection, but not with 3GCSE infection [23]. Logistic regression models were conducted by using the backwards stepwise method. Univariable and multivariable outcomes analyses (logistic regression) were conducted while enforcing the case type parameter (i.e., the 3GCRE group vs. the groups of 3GCSE and of the uninfected controls combined) in each outcome model.

This case–case–control study reveals and quantifies the clinical and epidemiological importance and significance of 3GCRE infections in equine medicine, and in equine hospitals. Larger studies in additional centers and countries are warranted. Antibiotic stewardship programs, both in hospitals and community settings, are mandatory in order to curb the continued dissemination and spread of 3GCRE pathogens.

The study was approved by the Internal Research Committee of the KSVM-VTH, Israel (Protocol KSVM-VTH/15_2015).

Data is contained within the article or Supplementary Material.

The authors would like to thank the clinicians and technicians of the Koret School of Veterinary Medicine—Veterinary Teaching Hospital, large animal department for their assistance in sample collection. 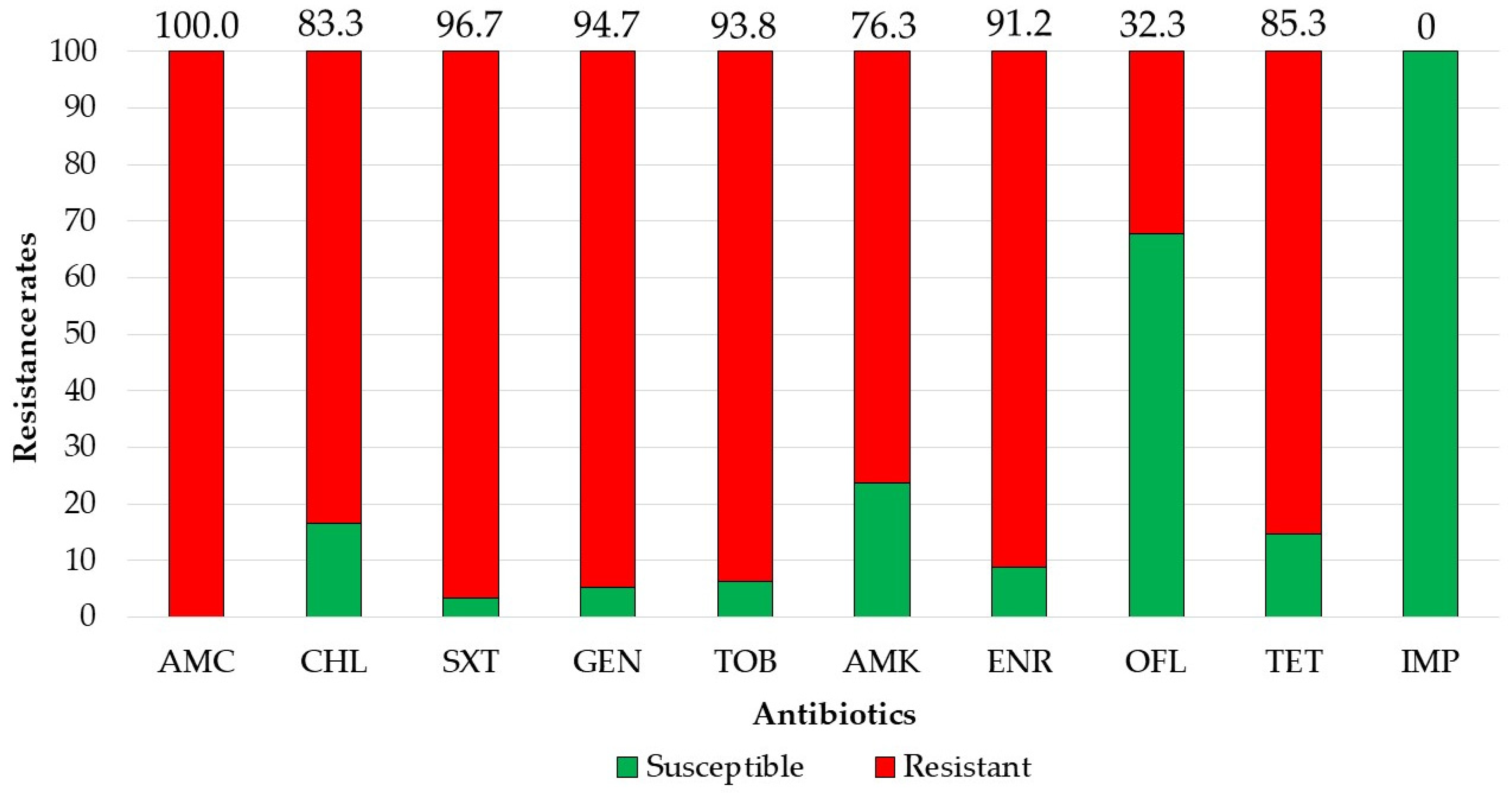