Graphene is a promising material possessing features relevant to bioelectronics applications. Graphene microelectrodes (GMEAs), which are fabricated in a dense array on a flexible polyimide substrate, were investigated in this work for their performance via electrical impedance spectroscopy. Biocompatibility and suitability of the GMEAs for extracellular recordings were tested by measuring electrical activities from acute heart tissue and cardiac muscle cells. The recordings show encouraging signal-to-noise ratios of 65 ± 15 for heart tissue recordings and 20 ± 10 for HL-1 cells. Considering the low noise and excellent robustness of the devices, the sensor arrays are suitable for diverse and biologically relevant applications.
Keywords: graphene; GMEA; graphene electrodes; extracellular recordings; cell-graphene interface graphene; GMEA; graphene electrodes; extracellular recordings; cell-graphene interface

Performing cellular measurements while being able to record electrical cell signals over a long period of time is important for understanding many physiological processes, including the degeneration of neuronal tissue that occurs, for example, in Alzheimer’s disease. Microelectrode arrays have been shown to be able to perform such measurements over the course of several months [1].
A typical microelectrode array device (MEA) consists of an assembly of metallic electrodes (10–200 µm in diameter), fabricated by complementary metal–oxide–semiconductor (CMOS) technology, passivated (to work in a liquid environment), and connected to an external measurement unit [2,3]. The most common MEA materials are gold, platinum, and titanium, whose performance have been studied for decades [4,5,6,7,8]. Nonetheless, there are several problems with conventional MEAs. First, since such devices are mostly fabricated on rigid substrates (e.g., silicon, quartz, sapphire, borosilicate glass, etc.), the final devices are difficult to integrate with soft tissue [9,10,11]. Moreover, the materials are not fully suitable to perform cell measurements due to their high mechanical mismatch compared to tissue. Therefore, there is a need to fabricate chips on materials with a lower Young’s modulus such as polyimide, whose value is about 100 times smaller than that of silicon. In addition, polyimide is well suited due to its low moisture uptake in liquid environments and its high thermal and chemical stability.
Inkjet printing technology has evolved recently to the state where the MEA elements can be easily and cost-effectively printed on different substrates, including soft polymers [12]. Nonetheless, the inkjet-printed devices are still lacking in their performance and stability when compared to microfabricated ones. Therefore, polyimide has the advantage that, though it is soft, it is still compatible with CMOS technology.
The combination of MEAs and flexible substrates has gained much attention recently, specifically when combined with carbon-based materials like carbon nanotubes (CNTs), which exhibit great performance and flexibility [13,14]. There are several ways to build devices with carbon materials. On the one hand, the combination of carbon nanomaterials (CNTs, carbon black, etc.) and soft polymers into a single component is a promising method to fabricate new materials exhibiting outstanding properties and performance [15]. On the other side, graphene can be used for this purpose. In this regard, graphene also has many promising features such as biocompatibility [16,17], intrinsic flexibility, and excellent electrical properties [18,19], allowing applications in the high-frequency regime [20,21,22]. Furthermore, the transparency of graphene provides possibilities for the development of new tools for optogenetics [23,24,25].
In this work, we report on the fabrication of flexible and robust graphene-based microelectrode arrays on a biocompatible polyimide substrate. The devices, even after severe mechanical deformation, were used for in vitro and ex vivo extracellular recordings multiple times, providing low noise and high signal-to-noise ratio recordings.

The graphene multielectrode arrays were fabricated using standard photolithography (see Figure 1a for the fabrication steps). In order to create a flexible chip, a sacrificial layer of Cr/Au/Cr (10/100/50 nm) was evaporated on top of a Si wafer prior to the fabrication. Then, two layers of PI-2611 (HD Microsystems, Parlin, NJ, USA) were spin-coated on top of the wafer to result in an approximately 10 µm thick polyimide film after a hard-bake (350 °C). The subsequent fabrication consisted of: (1) evaporation of a metallization layer (Ti/Au, 10/50 nm) using a LOR-3B/nLOF (MicroChemicals GmbH, Ulm, Germany) resist stack for liftoff; (2) graphene transfer using a high-throughput technique [21]; (3) defining graphene areas using AZ-5214 (MicroChemicals GmbH) resist and oxygen plasma (200 sccm, 300 W, 5 min); (4) a second metallization to sandwich the graphene and provide a lower contact resistance; (5) a final passivation with photostructurable polyimide HD-8820 (HD Microsystems) resulting in an approximately 3 µm thick layer. After fabrication, the chips were immersed into chromium etchant (Sigma, St Louis, MO, USA) for approximately 24 h to remove the chromium sacrificial layer [26]. The resulting devices can be seen in Figure 1d.

An important step towards stable characterization and cell culture measurements is soldering of the chips. Due to the flexibility of the devices, a standard measurement process would be difficult or even impossible to perform. A soldering protocol, as depicted in Figure S2 (Supplementary Materials) fixes the chip on a carrier and helps to improve the in vitro compatibility of the devices and the long-term stability. Special carriers were prepared, with the inner contact pads matching the exact geometry of contact pads on the chip. The carrier was placed on a hotplate (180 °C), and a soldering paste (42Sn/58Bi alloy, NC-31, AMTECH) was dispersed around the contact pads. When the flux was evaporated and the excess alloy was removed, only small amounts of alloy were left on top of the carrier’s contact pads. Afterwards, the chip was simply placed on top of the carrier and aligned under the microscope. When cooled down, any remaining flux was removed in ethanol, and the back side of the chip was glued with medical epoxy (EPO-TEK 302-3M). Two glass rings were glued (with polydimethylsiloxane (PDMS)) on top of the chip to provide containment for in vitro and ex vivo tests (see Figure S2). The suspended chip is not taut across the hole in the carrier and can still be mechanically deformed small distances. Robustness of the chips was tested by completely crumpling one of the chips prior to encapsulation (see Supplementary Materials, Video S1). Persistent wrinkles in this device further show that the encapsulated chips remain deformable after encapsulation. Therefore, the devices can be still considered to be flexible, since the substrate is not fully tensioned while soldering.

Electrical impedance spectroscopy was performed on a VSP-300 multichannel potentiostat (BioLogic Science Instruments, Seyssinet-Pariset, France). The spectra were taken using graphene as a working and a Ag/AgCl pellet as a reference electrode in 1× phosphate-buffered saline (PBS) solution. A 10 mV alternating current (AC) potential was applied and a frequency range between 1 Hz and 1 MHz was scanned.

The multichannel recordings were taken using a homebuilt setup, which consists of a preamplifier (10×) and a main amplifier (1×, 10×, or 100×) [27,28,29]. The recordings can be performed at up to 64 channels in parallel with a sampling rate of 10 kHz per channel. The measurements were performed in a shielded metal box to avoid external noise sources. Only a 50 Hz comb filter was applied to the recording in order to remove the power grid pick-ups. A Ag/AgCl pellet electrode was used as a reference and connected to the ground.

The cardiomyocyte-like cells, HL-1 [30], were cultured in T25 flasks. After reaching confluency, the cells were split and seeded on top of the graphene microelectrodes (GMEAs) with a density of 200 cells/mm2. The details of the procedure can be found elsewhere [30]. In order to improve cellular adhesion, the chips were cleaned in 70% ethanol and coated with fibronectin/gelatin solution (5 µg/mL and 0.2 µg/mL respectively) for 1 h at room temperature. After cell seeding the chips were placed in an incubator (37 °C and 5% CO2). Claycomb medium, supplemented with 10% fetal bovine serum, 100 U/mL–100 µg/mL penicillin-streptomycin, 0.1 mM norepinephrine, and 2 mM l-glutamine was exchanged every day. The medium was also exchanged approximately 2 h before the measurements.

In order to perform ex vivo heart tissue measurements, embryonic heart tissue was prepared by dissection of an E18 Wistar rat. A heart from an embryo was quickly isolated, washed in Hank’s balanced salt solution. The following short-term storage and measurements were performed in the supplemented Claycomb medium (described above) at room temperature. The experiments were done with the approval of the Landesumweltamt für Natur, Umwelt und Verbraucherschutz Nordrhein-Westfalen, Recklinghausen, Germany, number 84-02.04.2015.A173.

The presented GMEA devices show extracellular recordings with excellent signal-to-noise ratios of up to 65 ± 15. The use of graphene’s extraordinary properties for fabrication of electrode arrays on a biocompatible polyimide substrate results in good cell-interface properties and is promising for further applications. Due to the transparency of our devices, the concept can be extended for optogenetic experiments. Furthermore, the fabrication technique explored in the manuscript can be adjusted for the design of in vivo devices such as bioimplants.

We are grateful to C. Beale for proofreading of the manuscript. The work was supported by Helmholz-CAS JRG funding. 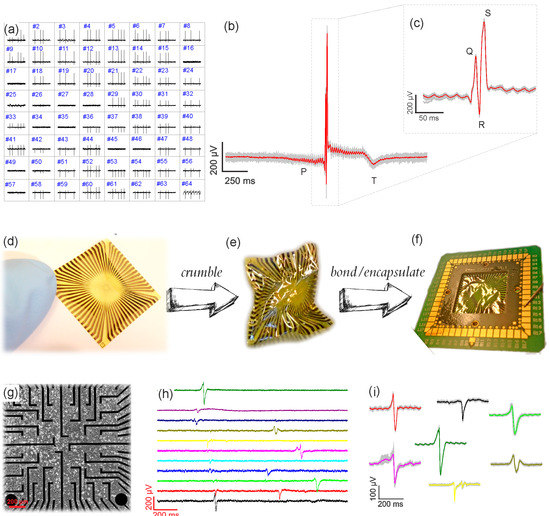 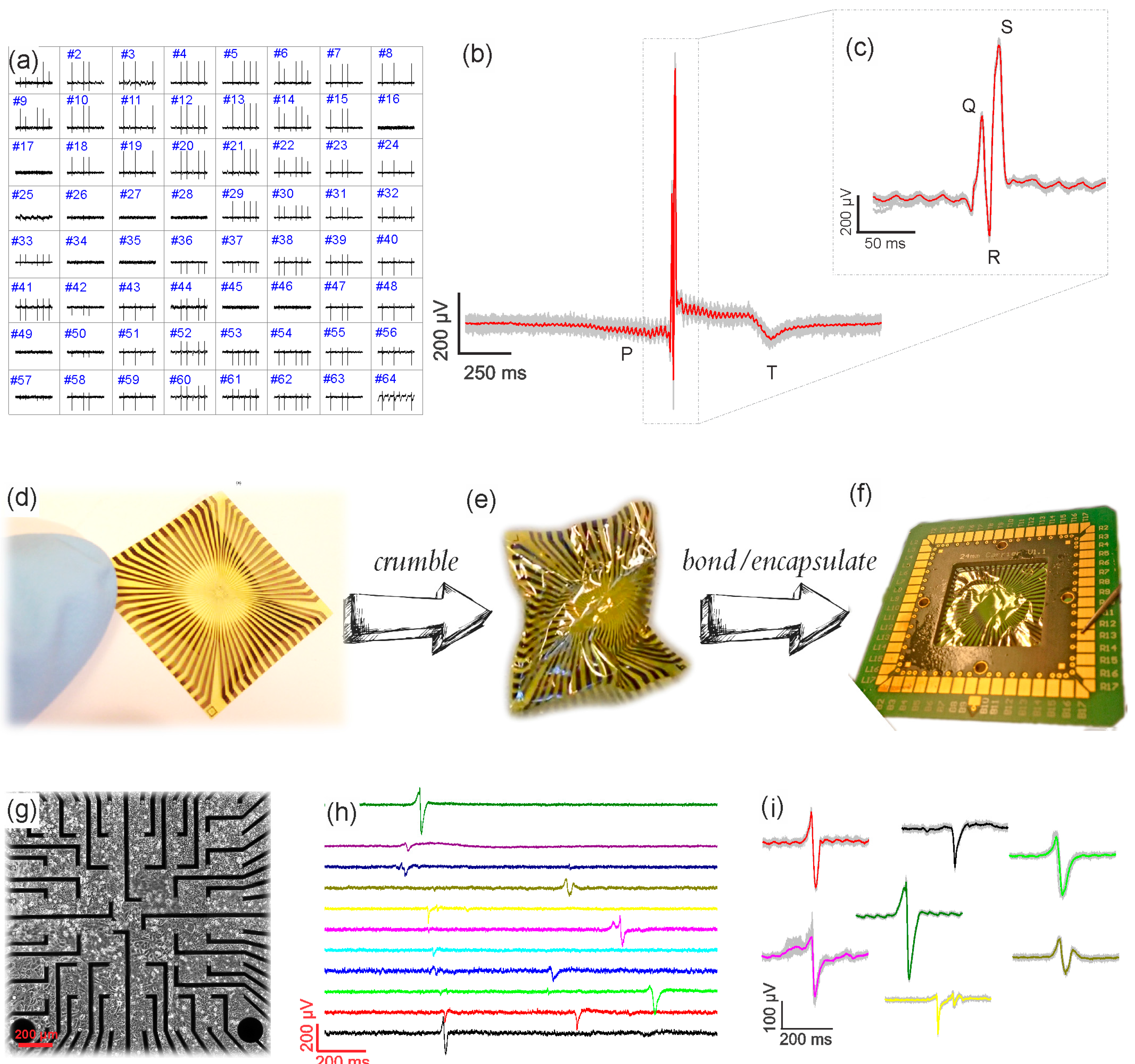