Oil palm has become an important source for vegetable oil in Asia, especially for Malaysia and Indonesia. This valuable resource is facing a serious problem on infection called basal stem rot (BSR) caused by a species known as Ganoderma boninense [1]. If not detected at early stage, the plants will end up dying; no known treatment can save the plants once the symptoms appear. BSR causes the appearance of fruiting bodies at the base of the stem, unopened spears, yellowing crown and deep cracks at the stem’s base [2].
Recently, studies on nanoparticles as sensor for diagnosis and detection of diseases has become of great interest among researchers. Quantum dot (QD) has been reported to have capabilities to overcome the limitations of organic dyes. QD is a semiconductor (CdSe, CdS, CdTe) that has diameter range between 2 to 10 nm which has advantages in optical applications. QD has unique properties such as broad absorption and narrow emission bandwidth that is ideal for simultaneous detection of multiple fluorophores [3]. In addition, QD is resistant to photobleaching, size-tunable and highly sensitive for detection of biomolecules (DNA, protein, peptide) by acting as luminescent probes in biological system [4]. In order to make QD compatible and flexible, the hydrophobic surface of QD needs to be modified in order to have hydrophilic functional group. The same functional group can be used for conjugation with biomolecules in aqueous media [5].
In analysis of biological application involving QD, it serves as energy donor in fluorescent resonance energy transfer (FRET) system. FRET is defined as through-space dipolar coupling interaction which allows electronic energy to be transferred from donor to acceptor [6]. QD has a broad absorption range and can be excited far from excitation range of the acceptor molecule and the absorption spectrum of acceptor can be paired with narrow emission of QD. By using this system, a specific DNA target can be detected where FRET can be used as signal for detection of positive hybridization.
In this report, we applied a FRET-based method utilizing QD for detection of synthetic DNA of Ganoderma boninense. In our approach, the synthesized QD is chemically modified in order to bind with the DNA probe. Cy5-labelled reporter probe, which is complementary with half of the target DNA, is used as acceptor in the FRET system. The FRET signal that can be observed after hybridization with the target DNA can be a marker for the existence of Ganoderma boninense.

Thirty mg of Se, 5 mL octadecene and 0.4 mL trioctylphosphine were added together in a 10 mL round bottom flask. The solution was stirred and warmed as necessary to completely dissolve Se. Thirteen mg of CdO was added into a 25 mL round bottom flask clamped in a heating mantle. 0.6 mL oleic acid and 10 mL octadecene were then added to the same flask. The flask was swirled to mix the liquids together. The cadmium mixture solution was then heated to 225 °C. A clean and dry pipette was used to quickly transfer 1 mL of the room temperature selenium mixture solution to the cadmium mixture solution.

Water soluble CdSe QD was prepared by using ligand exchange reaction method which 500 µL of CdSe QD in toluene was reacted with 100 µL of MPA. The mixture was covered with aluminium foil and stored in the fridge for overnight. After this incubation time, 1 mL of 1.0 M KOH was transferred to the mixture and two phase layers were formed and the upper layer was discarded. Then, 1 mL of toluene was added to the remaining phase. The upper layer of the resulting emulsion was also discarded. Next, precipitation process was carried out to remove the excess of MPA by adding 1 mL of acetone to the solution for three repeated cycles. Precipitate obtained was then dissolved with 1 mL of phosphate buffer solution (PBS) and stored as stock solution in fridge for further usage.

The mixture of 200 µL 1:1 (v/v) EtOH/H2O was used to dissolved 30 mg of EDC and 15 mg of NHS which was then transferred into 200 µL of phosphate buffer (20 mM, pH 6.0). The mixture was then added with 200 µL of 1:1 (v/v) CdSe QD/H2O mixture. The solution was sonicated in a soniclean bath for 1 min before allowed to stand at room temperature for 1 h. The solution was then centrifuged at 4,000 rpm for 20 min and the clear supernatant was removed. The pellet was carefully washed with water (2 × 200 µL). Then, 175 µL of 1:1 (v/v) MeOH/H2O mixture was added to pellet followed by 25 µL of C6 amine modified DNA (440 µM) and 100 µL of NaHCO3 buffer (50 mM, pH 9.0). The mixture solution was sonicated for 2 min to break up the pellet and the solution was stored at 4 °C for overnight. After this reaction time, the sample was centrifuged at 4,000 rpm for 20 min and the clear supernatant was carefully separated from the pellet. The Pellet was washed with 200 µL of 1:1 (v/v) MeOH/H2O before 0.5 mL of deionized water was added and sonicated for 5 min to obtain a clear stock solution. It was stored in the dark at 4 °C until further usage.

Hybridization solution of 1,500 µL which contain calculated amount of CdSe QD-ssDNA conjugate, reporter probe, target DNA and PBS buffer was mixed together in an eppendorf tube and shook thoroughly in order to obtain homogenous solution. The hybridization was carried out for 2 h at room temperature before fluorescence emission were taken.

Sample was transferred to a quartz cuvette with a micropipette. Fluorescence measurement for all samples was carried out by using spectrofluorophotometer (Shimadzu RF-5301PC, Kyoto, Japan). A fixed excitation wavelength at 488 nm with scan rate of 2 nm/s, bandwidth of 4 nm and slidwidth of 10 nm were used to obtain emission spectra (500–800 nm range) of all samples.

The samples particle size was measured using a HITACHI H-7100 TEM instrument. Samples of water soluble CdSe QD and CdSe QD-ssDNA conjugate were dropped on the copper grid separately for drying and spreading process. Then, the samples were measured with the magnification of 200,000× at scale of 100 nm.

Water soluble CdSe QD was reacted with MPA for overnight to make sure the hydrophobic ligands, hexadecylamine (HDA) and trioctylphosphine (TOPO) were exchanged with carboxylic (COOH) functional groups of MPA using ligand exchange reaction method. In this reaction, the hydrophobic ligands around surface of CdSe QD were replaced by hydrophilic ligands which contain thiol functional groups that attached to the surface of QD leading the COOH groups to be extended away from the QD. The prepared water soluble CdSe QD is stable up to one week.
Ligand exchange reaction method used in this study was able to replace TOPO and HDA efficiently with thiols from MPA. The presence of carboxylic groups is important to enhance the solubility of QD in water. In the process of ligand exchange reaction to occur, the new ligands should have an affinity as strong as possible enough towards QD in order to quickly and effectively replace the original surfactant molecules. In this study, thiol groups bind strongly to the surface of CdSe QD replacing the weaker bond of TOPO and HDA hydrophobic surfactant. In principle, when MPA reacted with CdSe QD, its pH value decreases to a certain value at which TOPO and HDA were protonated and detached from the CdSe QD [7]. Strong affinity of the thiolated groups will enhance the binding capability of the hydrophilic ligands to the surface of CdSe QD.
Normally, nanoparticle QD was modified for bioconjugation and to improve the optical properties. Since the organic ligand is not compatible in aqueous condition, the introduction of COOH groups enhance the compatibility of QD to covalently react with DNA in aqueous medium and increase its solubility in water. Besides, the coating protects QD from photo-initiated surface degradation, which is directly related to the fading of fluorescence intensity and toxicity.

3.2. Activation of COOH Functional Group on CdSe QD with EDC and NHS

Water soluble CdSe QD that contained COOH groups as bifunctional ligands was mixed with activating agents, EDC and NHS for formation of QD-ssDNA conjugate via amide-linkages. Normally, NHS has been used to prepare amine-reactive esters of COOH groups for chemical labeling, crosslinking and solid-phase immobilization applications. In this reaction, EDC was reacted with COOH groups of CdSe QD forming an unstable amine-reactive O-acylisourea intermediate which is also susceptible to hydrolysis, making it unstable and short-lived in aqueous solution. This intermediate was stabilized by the addition of NHS forming a semi-stable amine-reactive NHS ester. The COOH groups of resulting intermediate was then reacted with NH2 group of amine terminated ssDNA probe to form a stable amide bond and allowing conjugation of CdSe QD with ssDNA.

3.3. Sensing Characterization Based on Fluorescence Emission

The changes of the fluorescence signals for CdSe QD-ssDNA conjugate and hybrid system contained target DNAs (complementary and non-complementary DNA) were used to characterize the sensing capability of the developed detection system. Figure 1 shows fluorescence spectra of CdSe QD-ssDNA and CdSe QD-dsDNA hybridized with complementary and non-complementary target DNA. The emission peak at 640 nm, which corresponds to the emission of QD, was obtained for all spectra. Only hybridization with complementary target DNA shows emission peak at 680 nm confirming the occurrence of hybridization.
Hybridization solution contains two probes; reporter probe labeled with Cy5 and ssDNA conjugated with QD. Upon hybridization with target DNA, the reporter probe and CdSe QD-ssDNA will bind with the target forming sandwich hybrid [8]. Hybridization occurs in this system since the sequence of the ssDNA and reporter probe completely match with the sequence of target DNA (ssDNA match one half of the target sequence while reporter probe match the other half of the target). The resulting interaction of the hybrid brings the acceptor, Cy5 and donor QD into close proximity. When excited at 488 nm, QDs emit emission at 640 nm and lead the fluorescence emission from the acceptor Cy5 by means of FRET illumination, as shown in Figure 2. 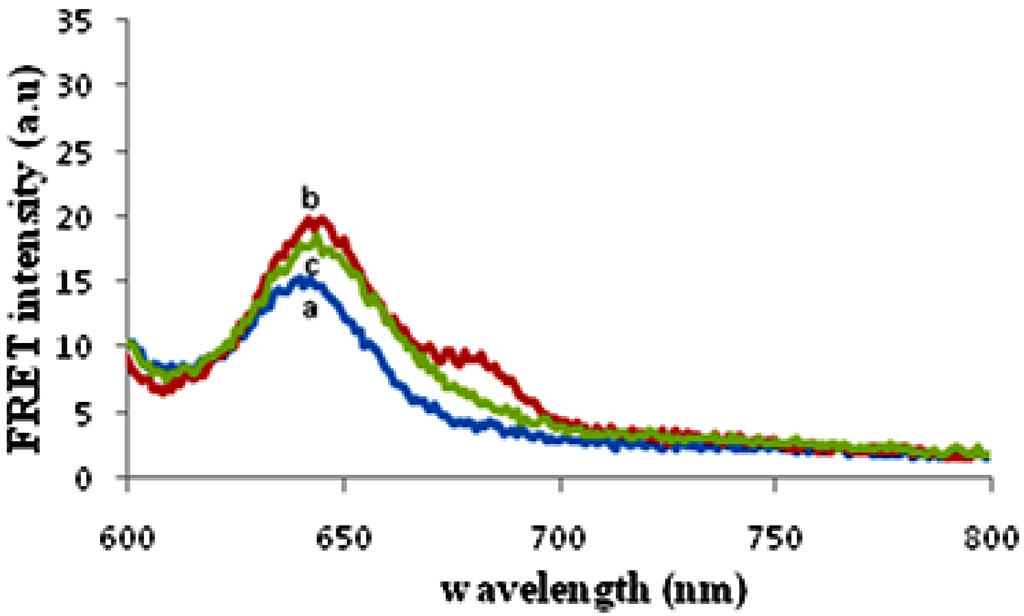 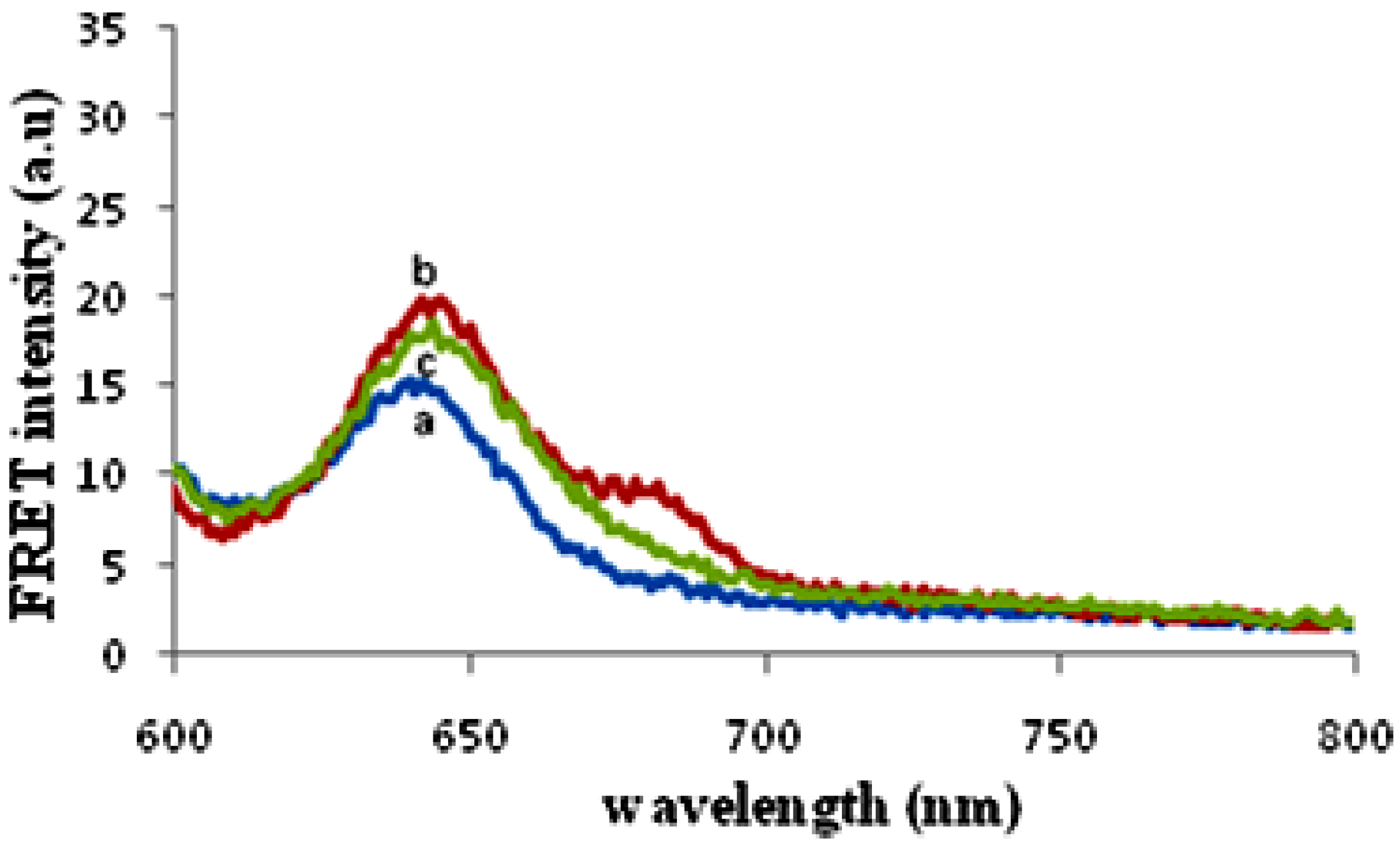 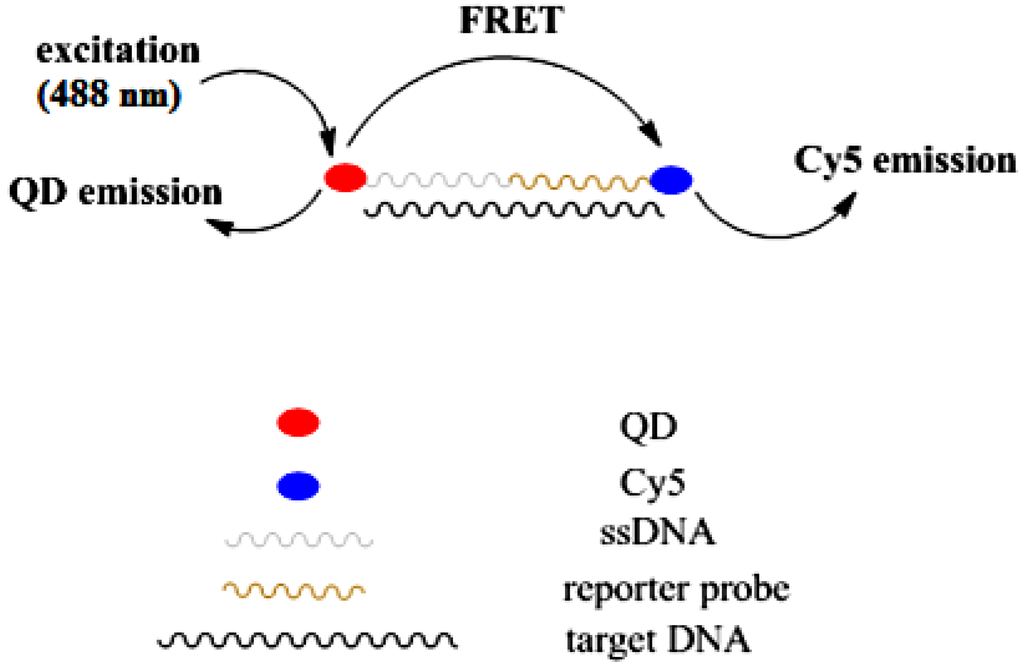 The particle size and morphology of water soluble CdSe QD and CdSe QD-ssDNA conjugate were analyzed using TEM. Figure 3 shows TEM image for both samples in 100 nm scale. It can be viewed that the size of the particles were in the range of 2 to 10 nm. These results also proved that the modification and conjugation of QD did not affect its particle size. It can been seen that in Figure 3(A), a single particle of QD is observed while in Figure 3(B), agglomeration is observed possibly due to conjugation with ssDNA. 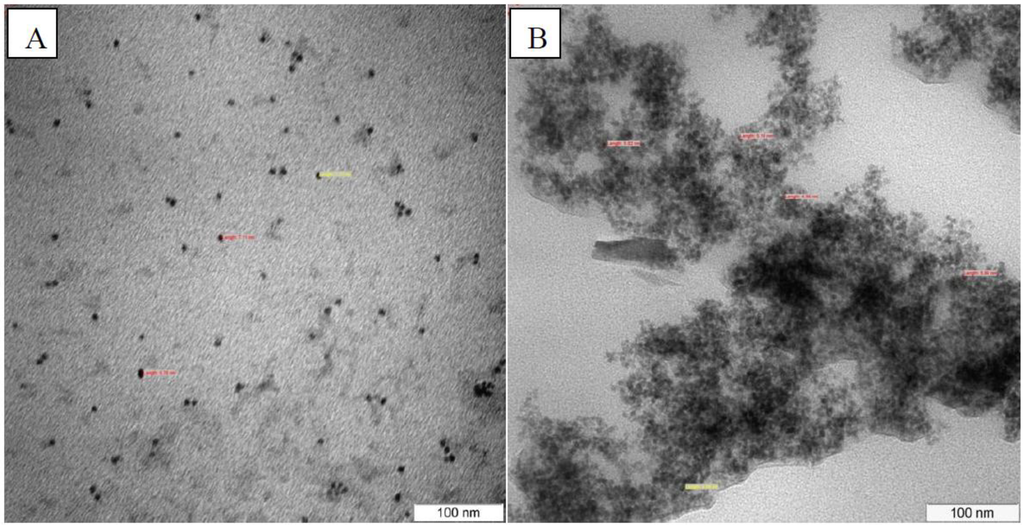 We have synthesized CdSe QD and applied the synthesized QD in development of DNA biosensor for synthetic DNA of Ganoderma boninense. Modification of QD retains the nano-sized of QD and compatible for bioconjugation with DNA. FRET involving QD was able to confirm the hybridization process which allows the detection of target DNA of Ganoderma boninense at high sensitivity. The developed DNA biosensor system has a potential for rapid, simple and sensitive application in agricultural and biological analysis.

This work was supported by Ministry of Science, Technology & Innovation, Malaysia (MOSTI).

Calculation of Limit of Detection (LOD)