The detection of pathogenic bacteria remains a challenge for the struggle against biological weapons, nosocomial diseases, and for food safety. In this research, our aim was to develop an easy-to-use electrochemical immunosensor for the detection of pathogenic Staphylococcus aureus ATCC25923. The biosensor was elaborated by the immobilization of anti-S. aureus antibodies using a self-assembled monolayer (SAMs) of 3-Mercaptopropionic acid (MPA). These molecular assemblies were spontaneously formed by the immersion of the substrate in an organic solvent containing the SAMs that can covalently bond to the gold surface. The functionalization of the immunosensor was characterized using two electrochemical techniques: cyclic voltammetry (CV) and electrochemical impedance spectroscopy (EIS). Here, the analysis was performed in phosphate buffer with ferro/ferricyanide as the redox probe. The EIS technique was used for affinity assays: antibody-cell binding. A linear relationship between the increment in the electron transfer resistance (RCT) and the logarithmic value of S. aureus concentration was observed between 10 and 106 CFU/mL. The limit of detection (LOD) was observed at 10 CFU/mL, and the reproducibility was calculated to 8%. Finally, a good selectivity versus E. coli and S. epidermidis was obtained for our developed immunosensor demonstrating its specificity towards only S. aureus. View Full-Text
Keywords: Staphylococcus aureus; self-assembled monolayer; immunosensor; cyclic voltammetry; electrochemical impedance spectroscopy Staphylococcus aureus; self-assembled monolayer; immunosensor; cyclic voltammetry; electrochemical impedance spectroscopy
►▼ Show Figures 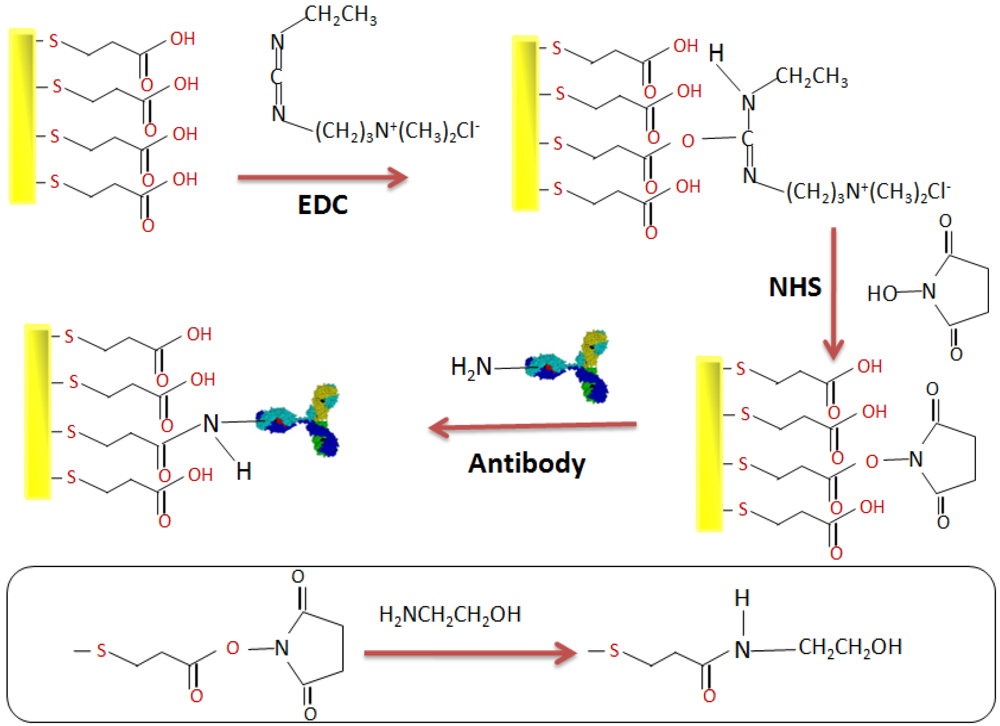 Braiek, M.; Rokbani, K.B.; Chrouda, A.; Mrabet, B.; Bakhrouf, A.; Maaref, A.; Jaffrezic-Renault, N. An Electrochemical Immunosensor for Detection of Staphylococcus aureus Bacteria Based on Immobilization of Antibodies on Self-Assembled Monolayers-Functionalized Gold Electrode. Biosensors 2012, 2, 417-426. https://doi.org/10.3390/bios2040417


Braiek M, Rokbani KB, Chrouda A, Mrabet B, Bakhrouf A, Maaref A, Jaffrezic-Renault N. An Electrochemical Immunosensor for Detection of Staphylococcus aureus Bacteria Based on Immobilization of Antibodies on Self-Assembled Monolayers-Functionalized Gold Electrode. Biosensors. 2012; 2(4):417-426. https://doi.org/10.3390/bios2040417