Trypanosoma such as Trypanosoma brucei and Trypanosoma cruzi, the causative agents for the potentially fatal African sleeping sickness and Chagas disease, respectively, have important influence on human health. African sleeping sickness occurs mainly in sub-Saharan Africa countries where it was reported that about 10,000 people were infected in 2009 [1,2]. Chagas disease is found in the Americas, mainly in developing areas of Latin America [1]. The currently accepted methods for the detection of Trypanosoma such as microscopic examination and xenodiagnoses have poor sensitivity and are also labor-intensive and time-consuming [1,2]. Immunological methods such as enzyme-linked immunosorbent assay, immunochromatographic dipstick test, radioimmunosorbent assay, and immunofluorescence antibody test are rapid and sensitive but not specific [3,4,5,6,7,8,9]. Molecular methods such as PCR and real-time nucleic acid sequence-based amplification are very specific but expensive and time consuming, although combination of PCR and chemiluminescence southern blot has been used to improve the sensitivity of the detection of Trypanosoma [10,11,12,13,14,15,16,17]. These techniques are not implemented in Trypanosomiasis control programs due to the high cost of the equipment [14,16,18]. None of these methods are ideal to mass screening of samples such as the onset of outbreaks, epidemiological surveys, or blood unit screening [1], and without rapid and accurate diagnoses, treatment of the corresponding diseases is unlikely. Therefore, there is a need for an assay which can rapidly, sensitively and specifically detect Trypanosoma without the need for specialized equipment and highly trained personnel.
Lateral flow assays are inexpensive and easy to use diagnostic methods which make them ideal for use in resource-limited areas such as those affected by Trypanosoma [19,20]. While gold nanoparticles are commonly used for lateral flow assays, other particles such as liposomes [21,22,23] have also been investigated to lower the limit of detection [19]. Chemiluminescence offers a unique method of signal amplification, in which horseradish peroxidase-labeled reporter probes catalyze luminol and hydrogen peroxide to generate a signal which can be quantified by chemiluminescent readers. The incorporation of chemiluminescence onto a lateral flow assay format has previously demonstrated improved sensitivity over colloidal gold [24]. Similarly, HRP amplification has also previously been used for chromogenic signal enhancement in a nucleic acid lateral flow assay [25]. These results demonstrate the potential of on-membrane enzymatic amplification for enhanced signal generation. In this study, a simple and sensitive chemiluminescent lateral flow assay using a horseradish peroxidase (HRP)-labeled reporter probe has been developed for nucleic acid-based detection of Trypanosoma mRNA sequences. The capture and reporter probes were designed to target the Trypanosoma mRNA leader sequence, a 35 nucleotide spliced sequence present on the 5' end of all Trypanosoma mRNA, and the poly A tail found on the 3' end, respectively [26,27]. We demonstrate the ability to detect sub-femtomol amounts of synthetic leader sequences representative of Trypanosoma mRNA. The resulting chemiluminescent lateral flow assay represents an inexpensive, rapid, and sensitive method for nucleic acid detection without the need for target amplification or costly equipment.

The test strip consists of four components mounted together on an adhesive backing: sample application pad, oligonucleotide-biotin-streptavidin-HRP conjugate release pad, nitrocellulose membrane, and the absorbent pad (Figure 1). Each component was prepared separately and then assembled on an adhesive backing prior to use. Once assembled, the strips were stored desiccated at 4 °C until use. 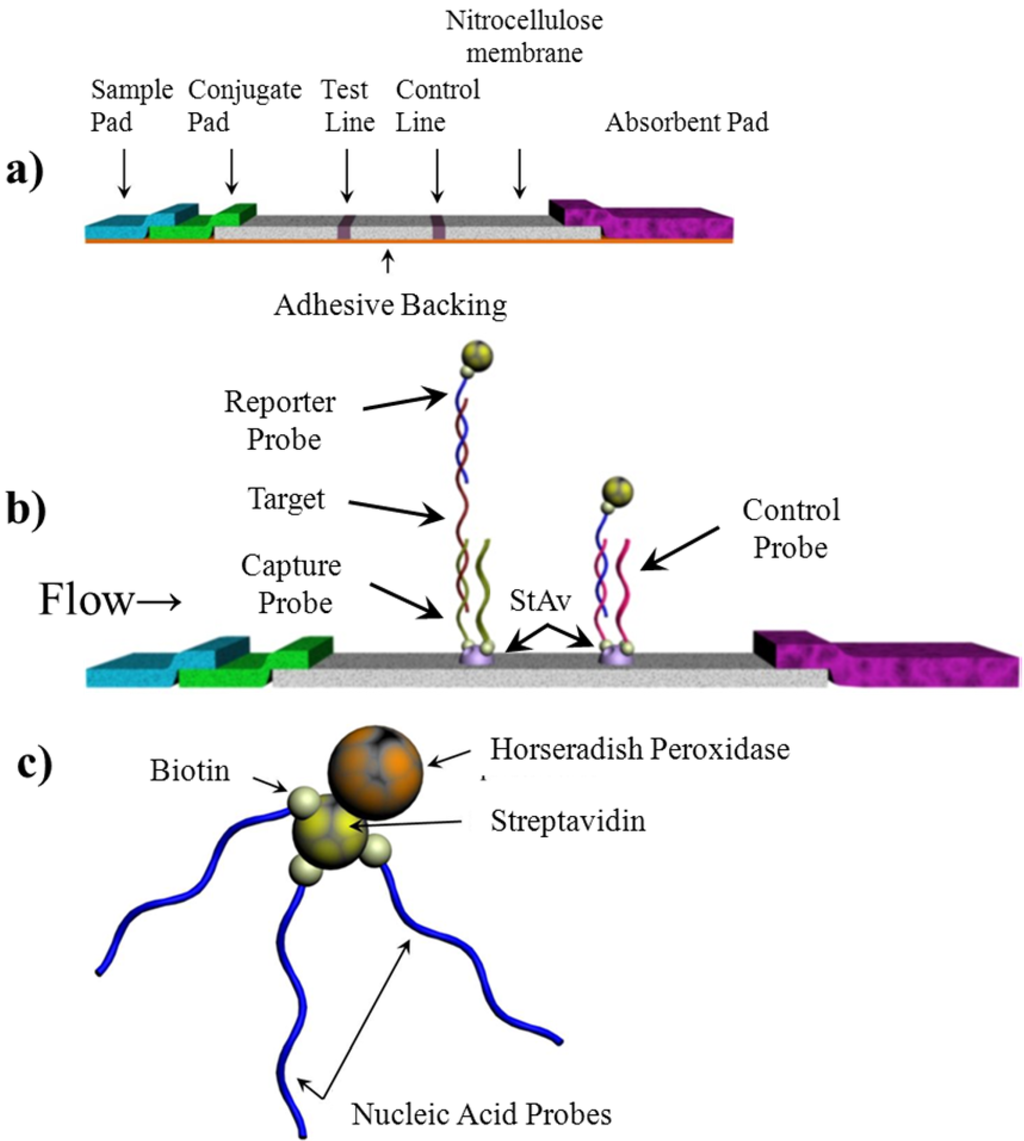 Trypanosoma mRNA was selected as the target analyte to demonstrate our chemiluminescent lateral flow assay, and synthetic nucleic acid sequences representing the mRNA were used in the experiments (see sequences in Table 1). The unique leader sequence at the 5' all Trypanosoma mRNA can serve as a unique probe hybridization site. In addition, the poly(A) tail on the 3' end can be found on all mRNA originating from eukaryotic organisms. These two regions of the mRNA were chosen as the probe binding sites. Both the reporter and capture probes were acquired with a biotin modification allowing for conjugation to streptavidin. The target sequence selected consisted of a leader sequence, a linker sequence and a 25 base poly(A) tail.

The sample application pad (CF5, Whatman International Ltd., Piscataway, NJ) was pretreated by immersion in 0.1 M Na2B4O7·7H2O, pH 8.6 containing 1% Triton X-100 and was dried overnight at 37 °C. Following pretreatment, the pad was stored at room temperature in a desiccator until assembled. During the assay, the sample is placed on this pad and then migrates to the conjugate pad using capillary flow.

The absorbent pad (CF5; Whatman International, Kent, England) was used as supplied without further modification. This pad serves as the capillary force driver as well as the reservoir for the used assay reagents.

For assembly of the lateral flow assay, the sample pad, conjugate pad, nitrocellulose strip and absorbent pad were all placed in an overlapping sequence on a double sided adhesive tape as seen in Figure 1. The other side of the tape was mounted an acetate strip for rigidity. All components were cut to a width of 4 mm. The sample pad, conjugate pad, nitrocellulose and absorbent pads were cut to lengths of 10 mm, 10 mm, 25 mm, and 38 mm, respectively. The pads overlapped by 1 mm when assembled on the adhesive backing to allow for optimal flow.

The assay ran as follows: 100 μL of sample solution were first applied onto the sample pad and allowed to migrate towards the absorbent pad. Ten minutes after the sample solution was applied, 100 μL of the 1:1 mixture of Super SigerSignal West Pico Luminol/Enhancer Solution and Supersignal West Pico Stable Peroxide Solution and H2O2 (Peirce Biotechnology, Rockford, IL, USA) were applied onto the sample pad. The intensities of chemiluminescent signals generated on the test and control lines were either quantified in a mitrotiter plate reader (Biotek Winooski, VT, USA) or it was imaged with a CCD imaging station (Kodak, Rochester, NY, USA). In order for the test strips to be read on a microtiter plate reader a device was fabricated to fit into a tray of the reader. The holder device was machined in Delrin™ using a CO2 laser (Epilog Laser, Golden, CO) and designed so that the test lines and control lines corresponded to a well location (Figure 2).

Up to eight test strips could be read at one time using the holder device. For the microtiter plate reader, the chemiluminescent intensity was quantified over time. The chemiluminescent/time curve was then integrated. CCD imaging was used for assay optimization and to generate images. Data are reported as averages ± standard deviation of at least n = 3 replicates. Results are representative of at least three independent experimental trials.

The volume of the mixture of luminol and H2O2 applied significantly influences the rate of the chemiluminescent reaction, and further affects the performance of the test strip. When the volume is too low, insufficient luminol and H2O2 migrates to the test and control lines, resulting in false negative results. When the volume is too high, the nitrocellulose membrane “floods”, causing the luminol/H2O2 mixture to move up the sides of the holder device by capillary action, preventing proper migration up the lateral flow test strip. Optimization of the volume of the luminol-H2O2 mixture demonstrated that the optimal volume applied was 110 μL. The rate of application of the target sample and the luminol-H2O2 mixture was further controlled to maintain uniform flow and migration of each component up the test strip.

3.2. Limit of Detection of the Test Strip

The effect of the target concentration on the chemiluminescent signal was visualized with a CCD camera (Figure 3). It can be seen that while the control line was present in all target levels tested, the signal generated at the test line decreased noticeably as the target levels decreased. This response was expected as the decrease in target would result in a decrease in HRP on the test line.
Similar results were obtained using the microtiter plate reader. This assay allowed for quantification of the signal over time. A typical result obtained using the multi-mode microtiter plate reader is shown in Figure 4. At low target amounts, the chemiluminescent signal generated at the control line was significantly stronger than that at the test line which is in agreement with the results from the CCD imaging. The chemiluminescence generated on the membrane was detectable for over an hour following the application of the luminol-H2O2 mixture. The results suggested an increase in the signal generation with increasing target levels. Generally, the maximum chemiluminescent signal intensity of the target samples occurred at 20–30 min after application of the mixture, and the maximum intensity of negative control was less than 40 min. To quantify the signal, the signal intensity was integrated over a sixty minute period. The integration of the test line signal increased accordingly with increasing target concentration. 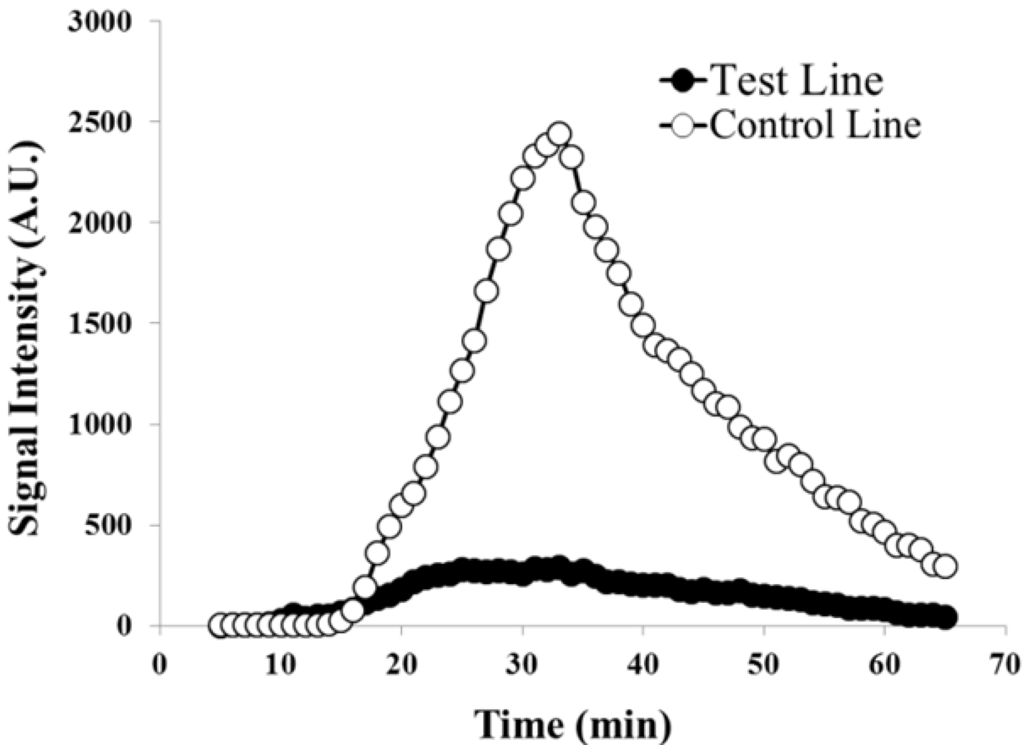 In this study, using Trypanosoma mRNA sequences as a model target, a nucleic acid and HRP-labeled lateral flow test strip chemiluminescent assay has been developed. The total assay time from sample application to results was approximately 70 min, but this time could be shortened at the sacrifice of limit of detection. The limit of detection was determined to be 0.5 fmol of target nucleic acid. Although synthetic targets are not expected to produce identical results as would target mRNA, the results still compare favorably to assays using similar synthetic targets. The results suggest that a general nucleic acid and enzyme-labeled lateral flow test strip chemiluminescent assay can be developed to rapidly, sensitively, and specifically test various pathogens and diseases. The reported assay can be adapted for detection of a range of pathogens or other analytes, and can be modified to detect RNA, DNA, antibodies, etc. Our novel membrane-to-microplate reader adapter was an effective and convenient means to quantify several lateral flow assays simultaneously, enabling multiplexed or replicate analysis in parallel. The assay is expected to be used for the rapid, sensitive and specific mass screening of samples, and the rapid and accurate detection of the pathogens and diseases so that the prevention, diagnosis and treatments of the diseases is greatly improved. Future work will demonstrate this with isolated Trypanosoma mRNA from clinical samples.

The authors would like to acknowledge USDA special grant #2010-34637-20985 for financial support. This project was supported in part by the UMass Amherst Center for Hierarchical Manufacturing, a nanoscience shared facility funded by the National Science Foundation under NSF Grant #CMMI-1025020. The authors would like to thank Luis Bastarrachea Gutierrez for the assistance with statistical analysis.