From a Chemotherapeutic Drug to a High-Performance Nanocatalyst: A Fast Colorimetric Test for Cisplatin Detection at ppb Level

Blood samples were taken from a vein in the arm. Plasma was prepared according to standard procedures. Plasma samples were immediately frozen and stored at −80 °C. Consent for this study was obtained from the Bioethics Committee of the Medical University of Białystok (Białystok, Poland), and written informed consent was obtained from all patients.

Gold chips were manufactured as described in previous papers [11,32]. The gold surface of the chip was covered with a photopolymer and hydrophobic paint, a procedure described previously. As a result, 9 × 12 free gold surfaces were obtained. With the use of this chip, nine different solutions can be simultaneously measured without mixing the tested solutions, and twelve single SPRi measurements can be performed from one solution.

The biosensor was immersed in 1-octadecanethiol (ODM) in ethanol (20 nM) for 24 h at room temperature. Then the biosensor (biosensor (i)) was washed several times in ethanol and water and dried under a stream of argon. The chip prepared in this way can be stored and used for subsequent measurements. The specific inhibitor galiellalactone (50 pg mL−1) was then applied to the active sites of the biosensor (i) and incubated for 24 h at room temperature. After this time, the process of immobilization of the inhibitor was completed. A biosensor (i) prepared in this way should be used directly for analysis. A workflow of the formation of a biosensor (i) with galiellalactone as the receptor is shown in Figure 2.

SPRi measurements were performed as previously described, using a homemade SPRi apparatus [11,32]. The signal was measured twice from the recorded images, after the receptor (antibody or inhibitor) was immobilized and then after interaction with the IL-6 solution. IL-6 solutions or diluted plasma samples were placed directly on the prepared biosensor for 10 min to allow interaction with the receptor (antibody or inhibitor). The volume of the sample applied to each measuring field was 3 μL. After this time, the biosensor was washed with water to remove unbound particles from the surface. SPRi measurements were made at a constant light angle. Non-specific binding was monitored by measuring the SPRi signal at a site on the chip. Non-specific binding was minimized by preparing the samples in PBS buffer and placing BSA in PBS buffer on the chip. The SPRi signal was obtained as the difference between the signals before and after the interaction with the analyzed sample for each active site separately. The results were evaluated using the calibration curve.

2.4. Standard Method Used for Validation of the Developed Biosensor

The standard method used to determine the IL-6 marker was the Elecsys IL-6 electrochemiluminescence test using the COBAS E-411 analyzer. The test was performed by a routine diagnostic laboratory.

3.1. Calibration Curves for Both Biosensors

3.2. Selectivity of the Biosensor with Mouse Monoclonal Anti-IL-6 Antibody as Receptor

The selectivity of a biosensor is a crucial factor for its application in determining an analyte in real samples. However, the choice of potential interferents is often difficult. All of the body fluids used in diagnostics contain very many potential interferents. Therefore, the potential interferents chosen in this investigation are considered as examples rather than specific knowledge-based choices. Albumin, leptin, CEA, CA-125 and metalloprotein-2 were selected as interfering substances. Albumin is always present in human plasma/serum in excess. The other substances are frequently determined in blood plasma/serum in parallel with the determination of IL-6. The experiments were performed at a constant IL-6 spike (20 pg mL−1) and 1000 times excess of the interferent. The results are shown in Table 1.
The results show that none of the tested interferents has a significant influence on the results. The recoveries are 100 ± 3%.

3.3. Selectivity of the Biosensor with the Inhibitor Galiellalactone as Receptor

The same potential interferents were used in this investigation. The experiments were performed at a constant IL-6 spike (20 pg mL−1) and 1000 times excess of the interferent. The results are shown in Table 2.
None of the tested interferents has a significant influence on the results. The recoveries are 100 ± 4%.

3.4. Analytical Characteristics of the Developed Biosensors

3.5. Determination of IL-6 Concentration in Biological Samples by the Two Biosensors

The determination of IL-6 in blood plasma samples is a very significant test for both developed biosensors because plasma contains many known and unknown potential interferents. These experiments were performed with 10 different samples of blood plasma assumed to have divergent IL-6 concentrations. IL-6 was determined in each sample by means of the two biosensors. Most of the plasma samples were diluted ten times with PBS buffer before measurement. The results are compared in Figure 4.
The comparison shows that the results obtained using the biosensor with the antibody as the receptor and using the biosensor with the inhibitor as the receptor are equivalent (R2 = 0.97 and slope close to 1). It is worth noting that the structures of the two biosensors are entirely different.

3.6. Validation of the Developed Biosensor with Mouse Monoclonal Anti-IL-6 Antibody as Receptor by Comparison with a Standard Method

Il-6 was determined in a series of 12 different blood plasma samples assumed to contain different biomarker concentrations, using the biosensor with the antibody as the receptor and by means of the electrochemiluminescence test performed on a COBAS E-411 analyzer in a routine diagnostic laboratory. The comparison of the results is shown in Figure 5. The slope close to 1 and R2 equal to 0.9989 indicate the high equivalence of the results. Thus, the biosensor with the antibody as the receptor has been validated. Indirectly, the biosensor with the inhibitor galiellalactone has also been validated, given the equivalence of the two biosensors, as confirmed by the results in Figure 4.

3.7. Example of Clinical Application of the Developed Biosensors—Resection of Ovarian Tumor and Endometrial Cyst

This research was funded by the Polish Ministry of Education and Science grant number BST-162.

The study was conducted according to the guidelines of the Declaration of Helsinki and approved by the Bioethics Committee at the Medical University of Bialystok, No. R-I-002/304/2019.

Written informed consent was obtained from all patients.

This article has received financial support from the Polish Ministry of Science and Higher Education under subsidy for maintaining the research potential of the Faculty of Chemistry, University of Bialystok. 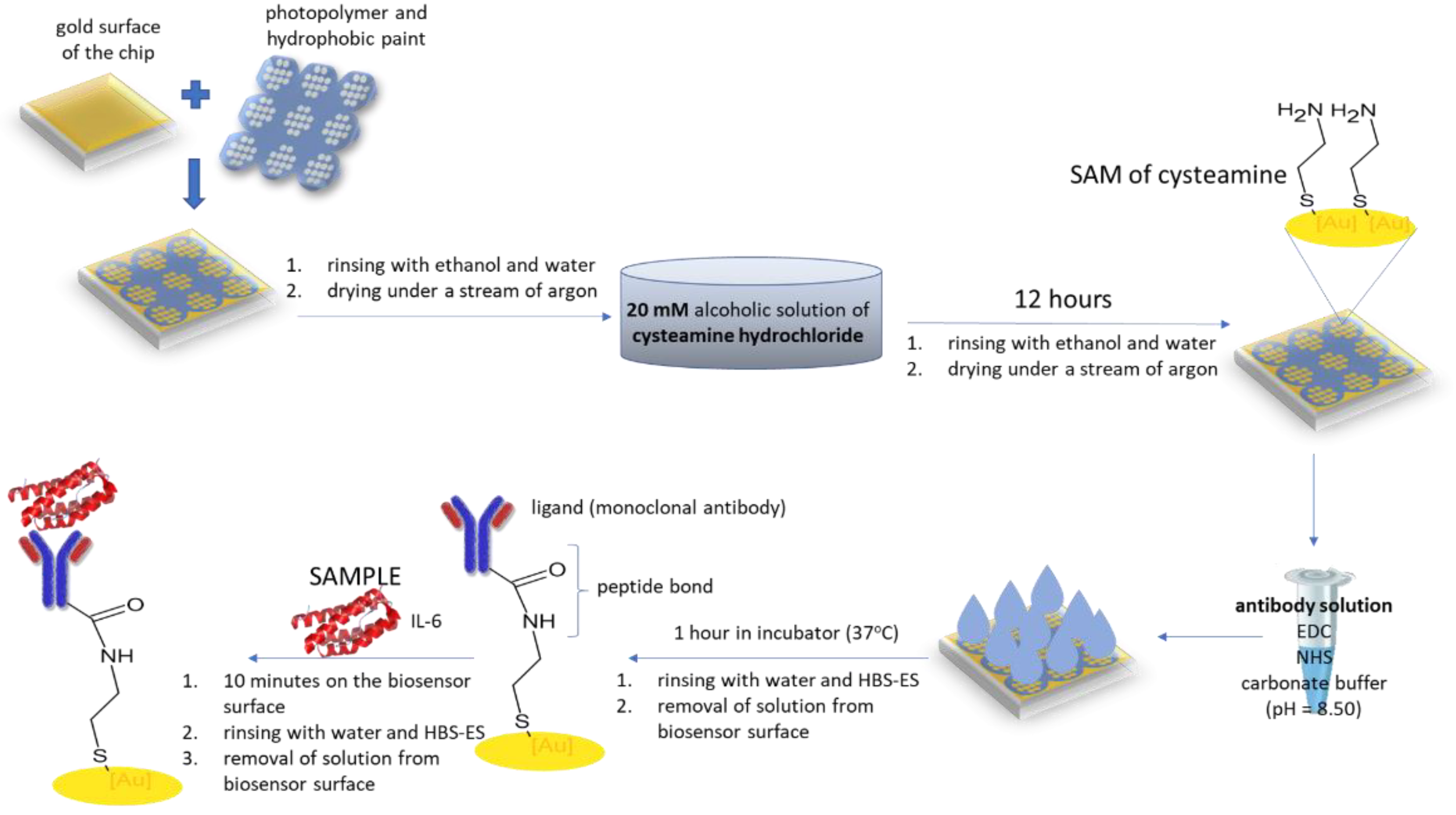 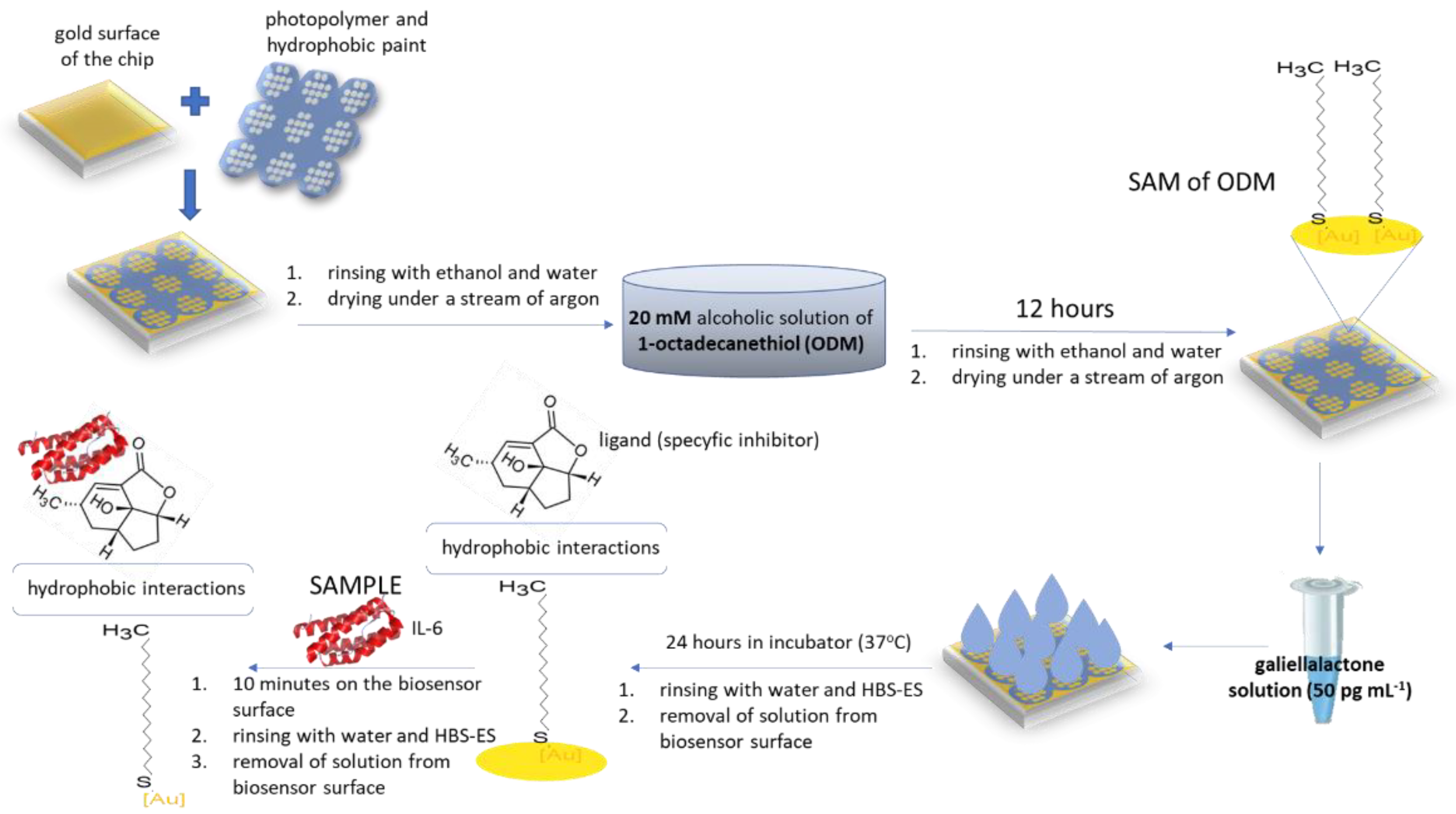 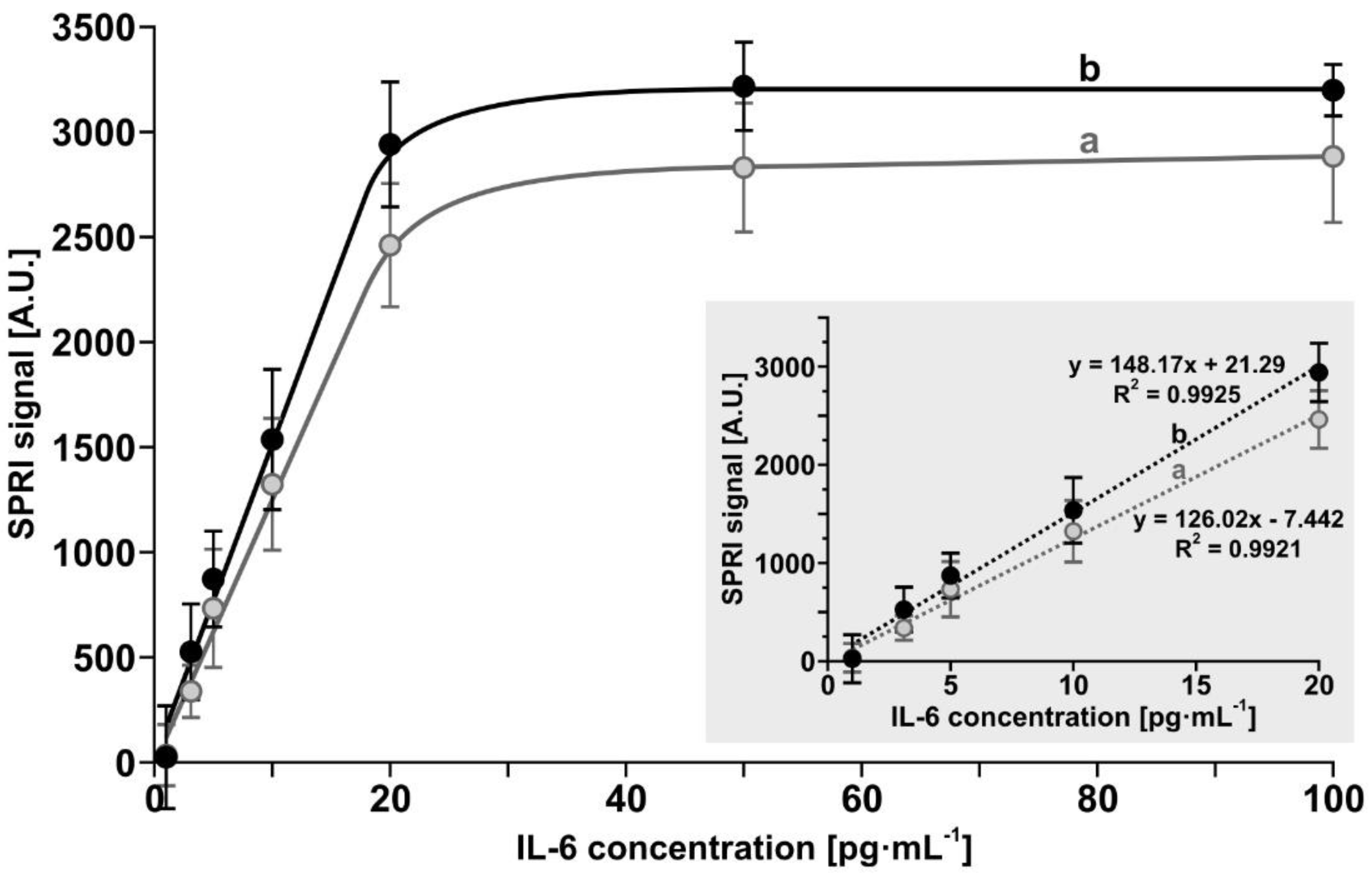 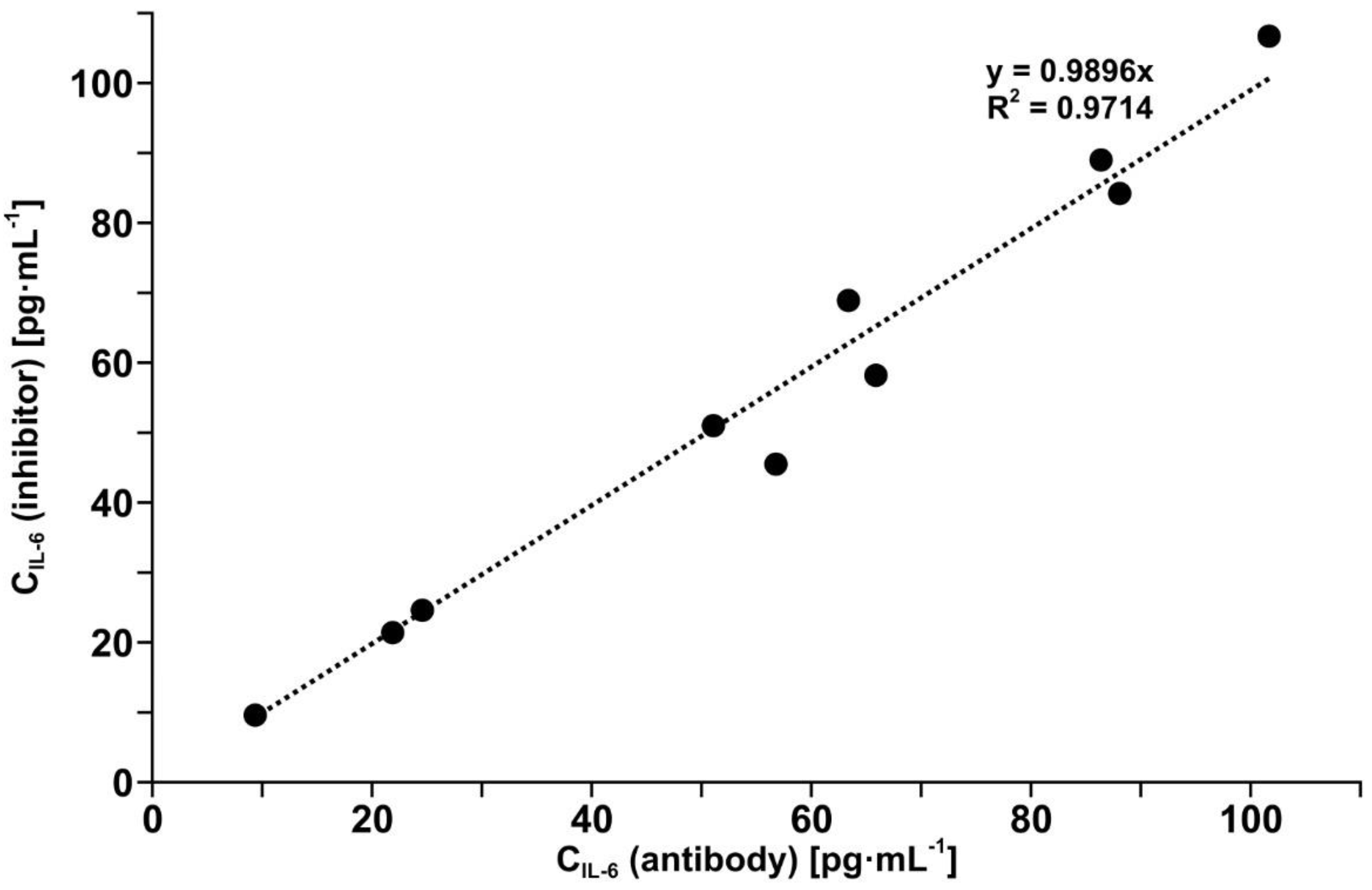 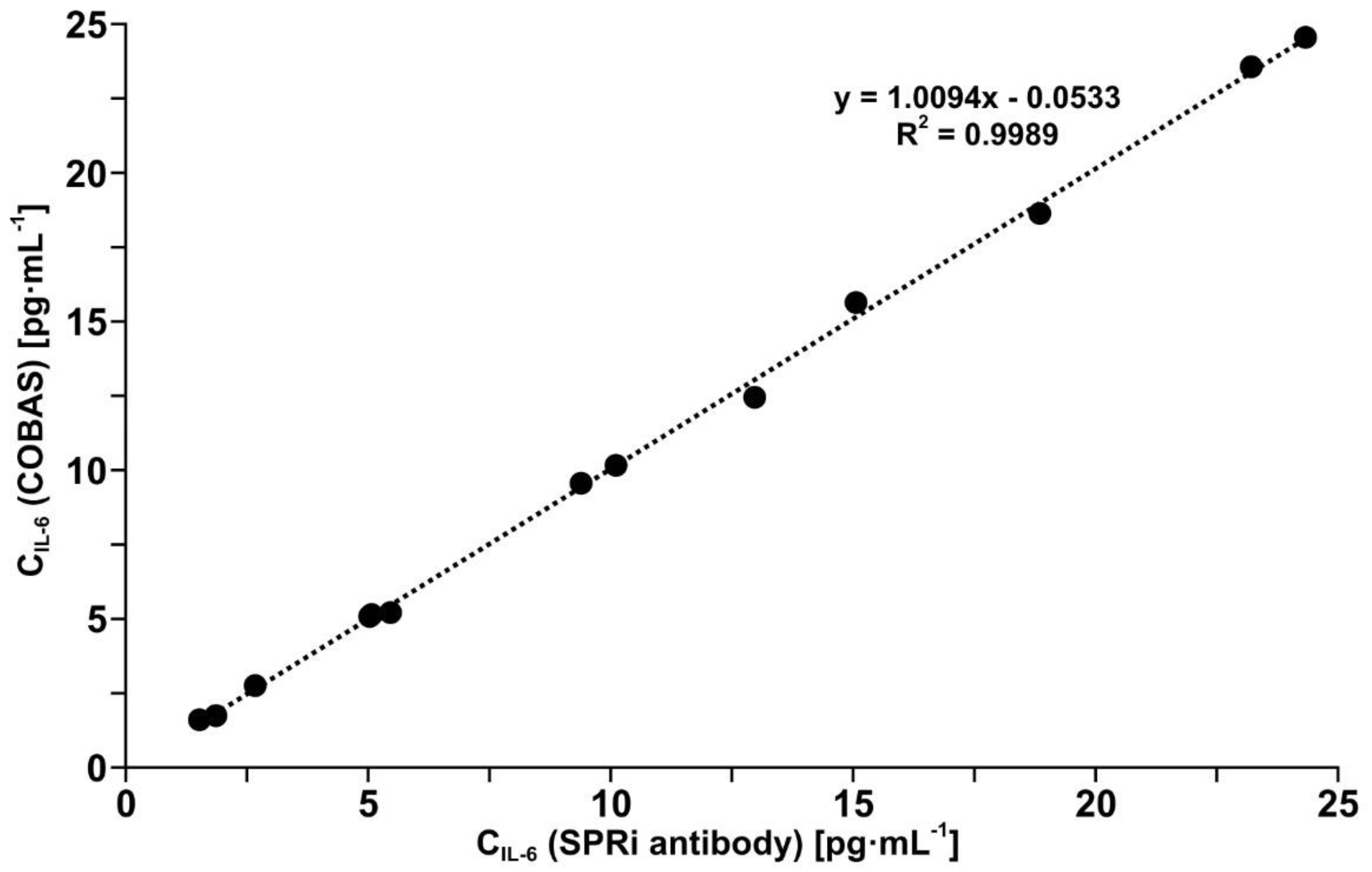 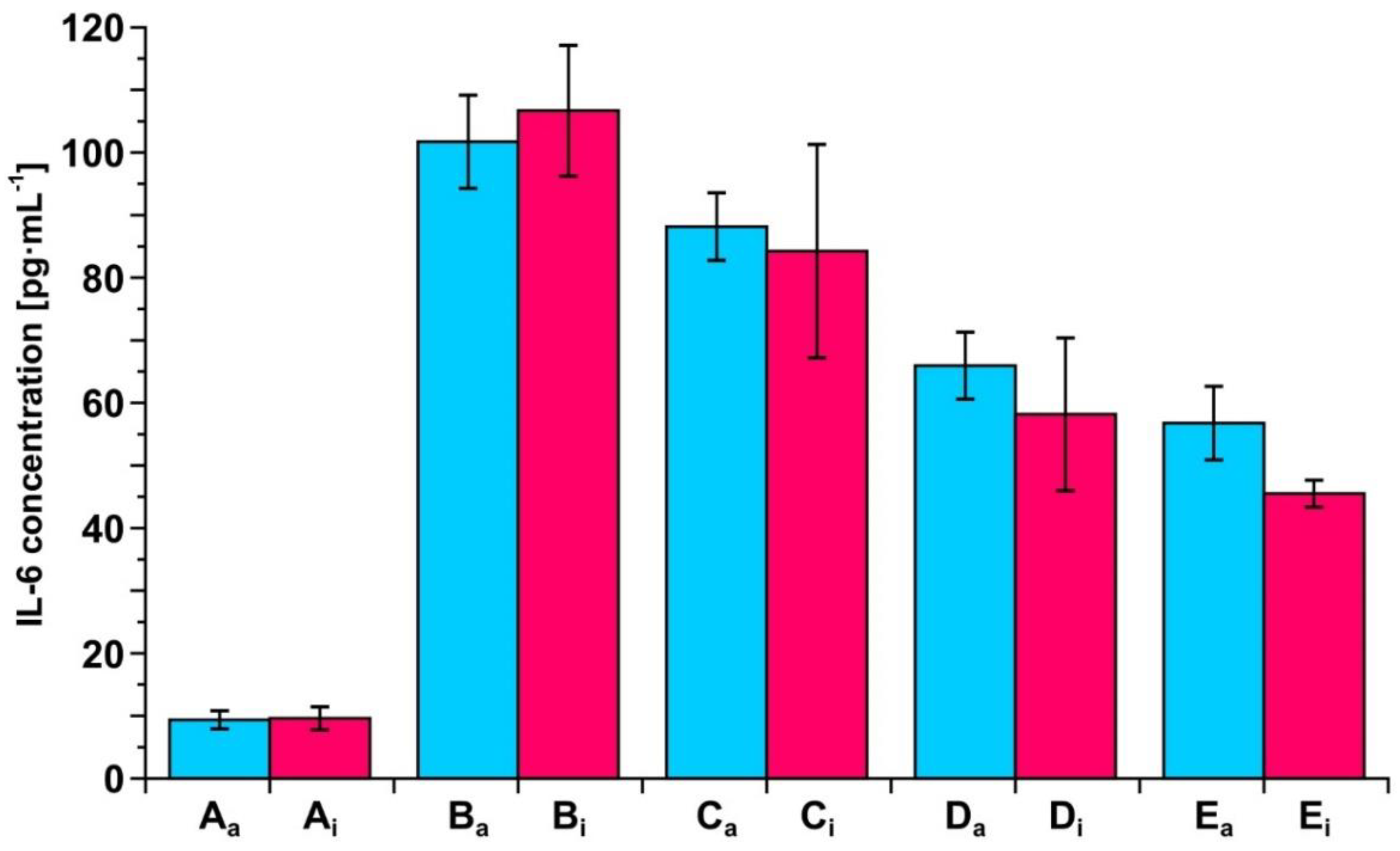 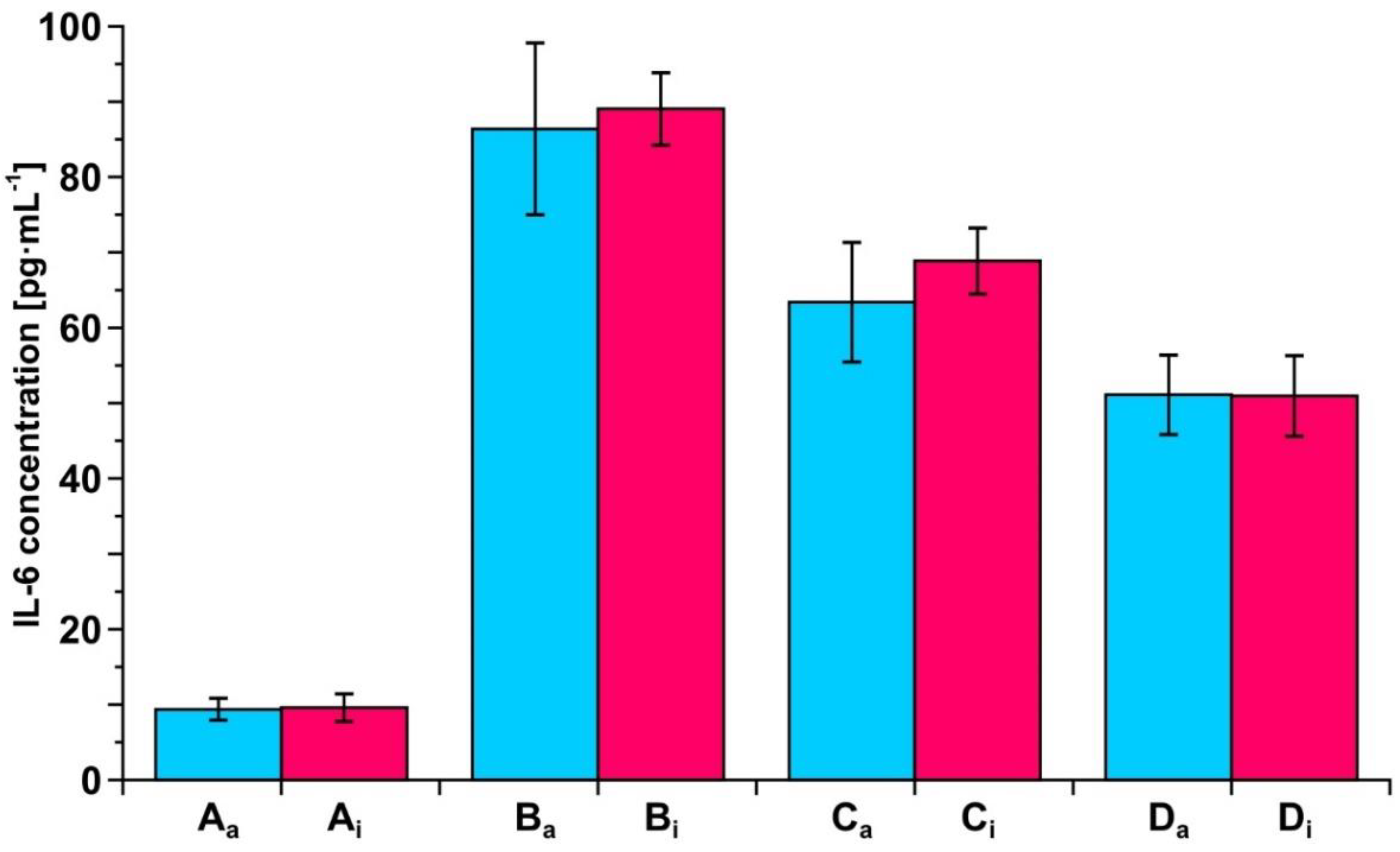