Lipopolysaccharides (LPS) are endotoxins, hazardous and toxic inflammatory stimulators released from the outer membrane of Gram-negative bacteria, and are the major cause of septic shock giving rise to millions of fatal illnesses worldwide. There is an urgent need to identify and detect these molecules selectively and rapidly. Pathogen detection has been done by traditional as well as biosensor-based methods. Nanomaterial based biosensors can assist in achieving these goals and have tremendous potential. The biosensing techniques developed are low-cost, easy to operate, and give a fast response. Due to extremely small size, large surface area, and scope for surface modification, nanomaterials have been used to target various biomolecules, including LPS. The sensing mechanism can be quite complex and involves the transformation of chemical interactions into amplified physical signals. Many different sorts of nanomaterials such as metal nanomaterials, magnetic nanomaterials, quantum dots, and others have been used for biosensing of LPS and have shown attractive results. This review considers the recent developments in the application of nanomaterials in sensing of LPS with emphasis given mainly to electrochemical and optical sensing. View Full-Text
Keywords: lipopolysaccharides (LPS); biosensing; nanomaterials; endotoxin lipopolysaccharides (LPS); biosensing; nanomaterials; endotoxin
►▼ Show Figures 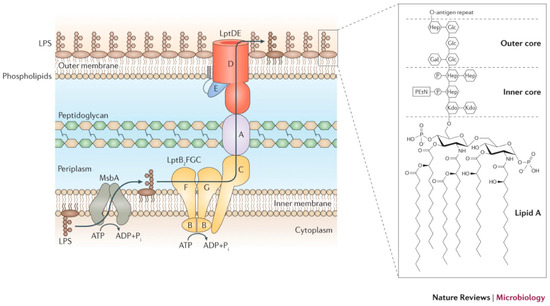