Ionic liquids (ILs) could serve as a structuring agent, a solvent, or a source of dopant during solvothermal synthesis of semiconductors particles. To understand the role of IL during formation of TiO2 particles, it is necessary to study the stability of this IL in solvothermal synthesis conditions, as well as studying the surface properties of formed TiO2 particles. In view of this, the effect of the 2,3,5-triphenyltetrazolium chloride IL ([TPTZ][Cl]) thermal decomposition during the solvothermal reaction and IL content in the reaction system on photoactivity of TiO2 microparticles has been systematically investigated. The samples obtained by using [TPTZ][Cl] exhibited remarkable photocatalytic properties in phenol degradation reaction under visible light. HPLC analysis of the solvothermal reaction medium and X-ray photoelectron spectroscopy (XPS) analysis of TiO2 particles revealed that [TPTZ][Cl] was decomposed completely and was incorporated into the TiO2 lattice. Generally, increasing the reaction time (1, 4, 12, and 24 h) promoted the TiO2 microspheres formation, as well as raising the visible light-induced photocatalytic activity of the photocatalysts. Longer reaction time was also accompanied by an increase in the efficiency of 2,3,5-triphenyltetrazolium chloride decomposition. The properties of the photocatalysts were investigated by means of UV-VIS diffuse reflectance spectroscopy (DRS), BET surface area measurements, scanning electron microscopy (SEM), X-ray powder diffraction (XRD) analysis, and XPS. View Full-Text
Keywords: ionic liquids; visible light photoactivity; TiO2 microparticles; ionic liquid thermal decomposition; solvothermal reaction time ionic liquids; visible light photoactivity; TiO2 microparticles; ionic liquid thermal decomposition; solvothermal reaction time
►▼ Show Figures 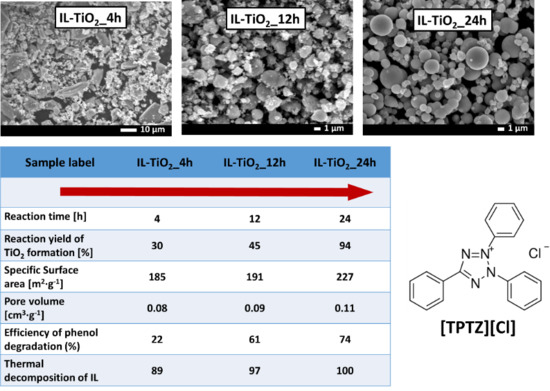