Thermoelectric transport through nanoscale systems has been studied experimentally [1,2] and theoretically [3,4,5], with the aim of controlling heat flow and harvesting thermal energy. Special interest has been placed on the characteristics of thermoelectrics of a quantum dot (QD) in the Coulomb blockade (CB) regime, both in weakly and strongly coupled QD devices [6,7,8]. Several approaches have been used to increase the efficiency of such devices. The efficiency of the QD system has been studied considering either the Coulomb interaction in two- or multi-level QD using non-equilibrium Green’s function (NEGF) methods [9] or the electron–phonon contribution [10]. A general formalism modeling the heat current in a lead–QD–lead system by NEGF has been proposed, and it has been shown that the heat current could be very high in the Coulomb blockade regime in which the thermoelectric current is very low due to the Coulomb blockade effect [11].
Besides the conventional thermoelectric structures, spintronic devices have been employed to enhance and control the efficiency of the thermoelectric transport using the spin degree of freedom in addition to charges [12,13]. To build a spintronic nanoscale system, spin polarized electrons have to be considered. One approach has been to take into account the Rashba-spin orbit coupling in the dot system [14,15] or assume ferromagnetic lead-based spintronic devices. In both cases, the spin effects can cause an increase in the figure of merit and in thermal conductance, which are significant in controlling the performance of nanodevices.
Another technique to control thermoelectric efficiency is to use a photon field. The thermoelectric current between two nanodevices, mediated by quantized photon field, can be controlled with an intermediate quantum circuit leading to the building of a mesoscopic photon heat transistor [16]. The proposed thermal quantum transistor could be utilized to develop devices such as a thermal modulator and a thermal amplifier in nanoscale systems [17]. Furthermore, it has been shown that heat can be transferred by electromagnetic radiation at a very low temperature when the phonons are frozen out [18], and the photon field can significantly modify the magnitude and the sign of the electrical bias voltage induced by the temperature gradient [19], which has important roles in the thermal amplifier.
Based on the aforementioned investigations, we study thermoelectric transport through a QD system coupled to a photon cavity, where the QD system is either in resonance or off-resonance with the photon field. A Markovian version of a Nakajima–Zwanzig generalized master equation is used to study the transport characteristics of the total system [20,21,22]. In previous publications, we have reported that the transient thermoelectric [23] and heat [24,25] currents can be modulated using a cavity photon field with even a single photon [26]. The influences of the photon polarization and the electron-photon coupling strength on the transient thermospin current and spin-dependent heat current in different systems have been demonstrated [15,27,28].
In this work, we theoretically investigate the thermoelectric current through a QD system in the steady-state regime. The effects of a photon field, such as polarization and electron-photon coupling strength, on the thermoelectric current are shown. A thermoelectric current oscillation “peak” is observed due to the photon-assisted tunneling processes. In addition, a thermoelectric current plateau in the off-resonance regime and current inversion in the resonant regime are found.

In this section, the model and the theoretical formalism used to calculate the thermal properties of the system are presented. We assume a quantum dot embedded in a two dimensional quantum wire, and the QD system is coupled to two semi-infinite leads from both ends, as is shown in Figure 1a. The cyan zigzag arrows indicate the photon field inside the photon cavity (cyan rectangle) coupled to the QD system. The temperature of the left lead () (red color) is considered to be higher than that of the right lead () (blue color). The contact regions couple the QD system and the leads. Figure 1b shows the potential of the quantum dot embedded in the two-dimensional quantum wire in the -plane. The electrons are driven through the QD system in the x-direction by the thermal bias.
The potential used to define the QD system can be represented as where is the electron confinement frequency due to the lateral parabolic potential, refers to the effective mass of the electrons, indicates the plunger-gate voltage that shifts the energy states of the QD system with respect to the chemical potential of the leads, and is the Heaviside unit step function with the length of the quantum wire nm. Here, we assume meV and nm, determining the diameter of the QD.
The QD system is hard-wall confined in the x-direction and parabolically confined in the y-direction. In two-dimensional systems, the Hamiltonian can be described by [29,30,31] The electron field operator is , the magnetic vector potential is introduced in the Landau gauge, and is the vector potential of the photon cavity written as Herein, A is the amplitude of the photon cavity field determined by the strength of electron–photon coupling , () when the photon field is parallel (perpendicular) to the direction of electron motion, and refers to the effective confinement frequency determined by the external static magnetic field B and the bare confinement frequency , via , where . The photon creation and annihilation operators are represented by and , respectively.
The second part of Equation (2) is the Zeeman Hamiltonian, which is , with being the Bohr magneton and the effective g-factor for GaAs. The Zeeman term shows the interplay between the electron magnetic moment and the magnetic field. The weak magnetic field here is to lift the spin degeneracy, which otherwise may create numerical difficulties. The external magnetic field and the parabolic confinement in the y-direction define a characteristic length scale, the effective confinement or magnetic length . In addition, the third part of Equation (2) () indicates the Coulomb interaction in the QD system [32], and the last part is the quantized photon field, with as the photon energy.
To investigate the transport characteristics of the total system in the steady-state, we use a projection formalism built on the density operator [20,21]. Before coupling the QD system to the leads, the density operator of the total system is given by the tensor product of the individual density operators , where and indicate the density operator of the left (L) and the right (R) leads, respectively. After coupling the QD system to the leads, one can find the reduced density operator that introduces the state of the electrons in the QD system under the effect of the leads as where the trace is over the Fock space of the leads. We derive the equation of motion for the reduced density operator as a non-Markovian integrodifferential equation with a kernel evaluated up to the second order in the system–lead coupling [33]. As we are interested in the long-time evolution and the steady state of the system, we further transform the equation into a corresponding Markovian equation for the reduced density operator of the QD system [22]: Herein, and represent the “dissipation” processes caused by both leads, meV is the photon decay constant, and indicates the mean photon number of the reservoir. The second and the third lines in Equation (5) display the photon dissipation of the cavity. () stands for the original operator in the non-interacting photon number basis, (a), transformed to the interacting electron photon basis using the rotating wave approximation [34], where care has been taken in constructing a non-white noise spectrum appropriate for strong electron–photon coupling [35,36,37].
The QD system is coupled to the two leads that play the role of electron reservoirs obeying the Fermi–Dirac distribution with () being the chemical potential of the left (right) lead, and and are the temperatures of the left and right leads, respectively. The Fermi distribution of the leads is included in both dissipation terms and [22].
We consider the chemical potential of the leads to be equal () here and the temperature of the left lead to be higher than the temperature of the right lead. Therefore, the temperature gradient generates thermoelectric current through the QD system coupled to the leads. The thermoelectric current from the left lead into the QD system, , and the thermoelectric current from it into the right lead, , can be introduced as The charge operator of the QD system is , and is the electron creation (annihilation) operator of the central system.

The characteristics of thermoelectric transport through a quantum dot embedded in a short quantum wire interacting with either off- or on-resonant cavity photon fields have been investigated in a steady-state regime. The QD system is considered to be connected to two electron reservoirs with different temperatures. The temperature gradient can accelerate electrons from either lead to the QD system, generating a thermoelectric current.
If a linearly polarized photon field is applied, the properties of the thermoelectric current are drastically changed. In the off-resonant regime, when the photon energy is smaller than the two lowest energy states of the QD system, an additional current peak is observed, which is only caused by photon-induced or photon-assisted transport. In addition, a plateau in the thermoelectric current is formed at a high electron–photon coupling strength. In the resonant regime, the effects of Rabi-splitting in the energy spectrum appears leading to an inversion of thermoelectric current. The inversion is more drastic for the smaller Rabi-splitting observed for a y-polarized photon field.
Even though we set out to investigate thermoelectric transport in the challenging regime of Coulomb blockades interrupted by narrow resonant peaks as the plunger gate voltage is changed, we observe that our approach indicates a mechanism that could be used in a thermoelectric inversion device. 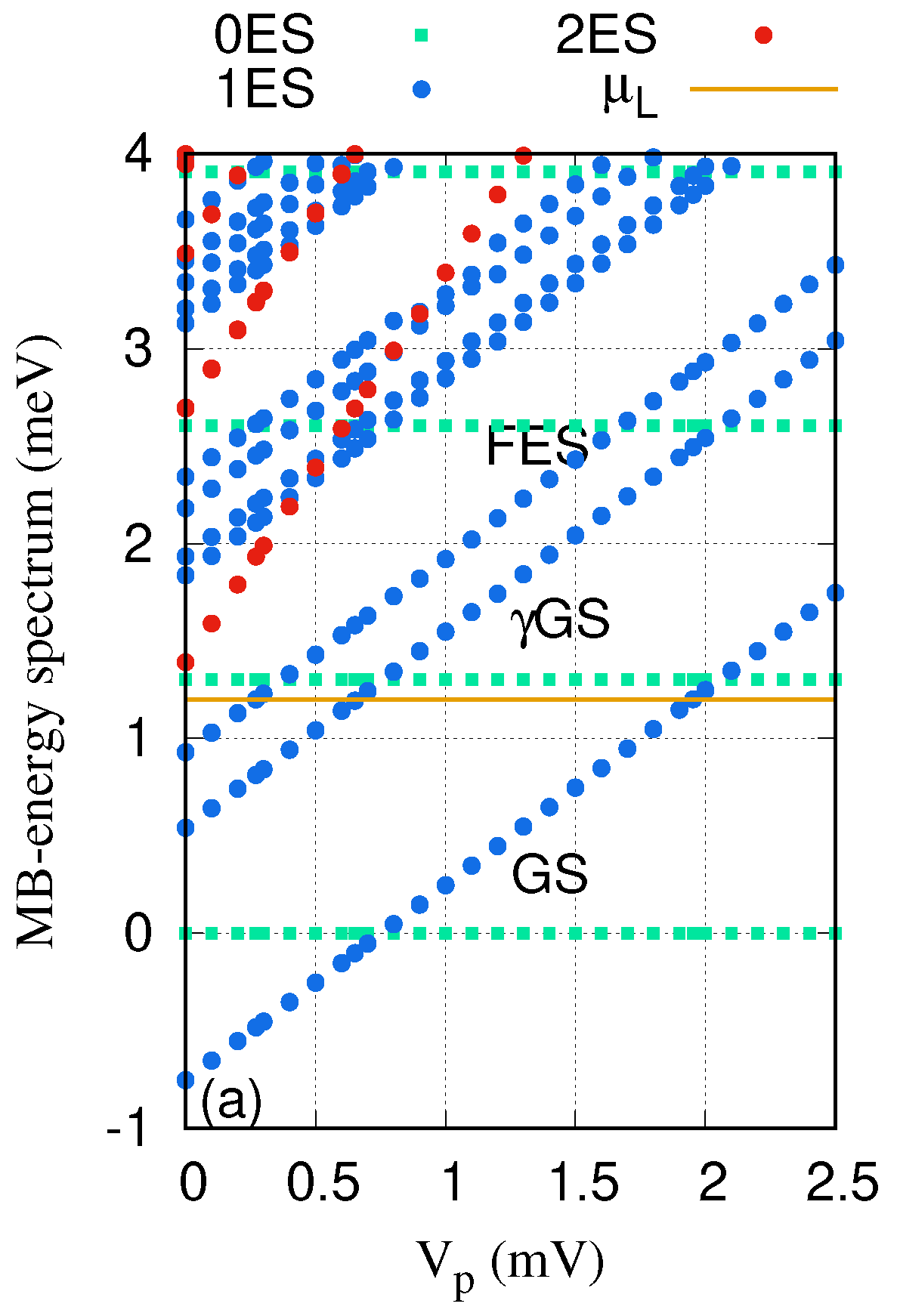 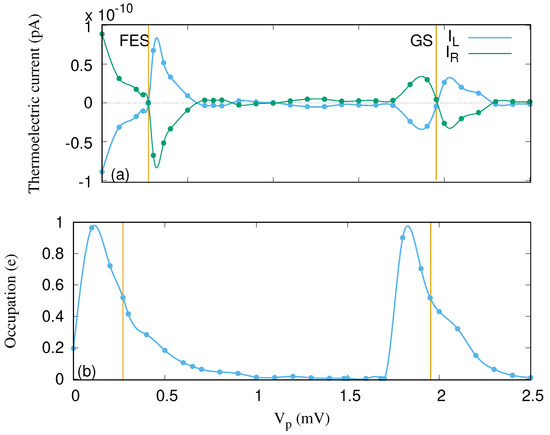 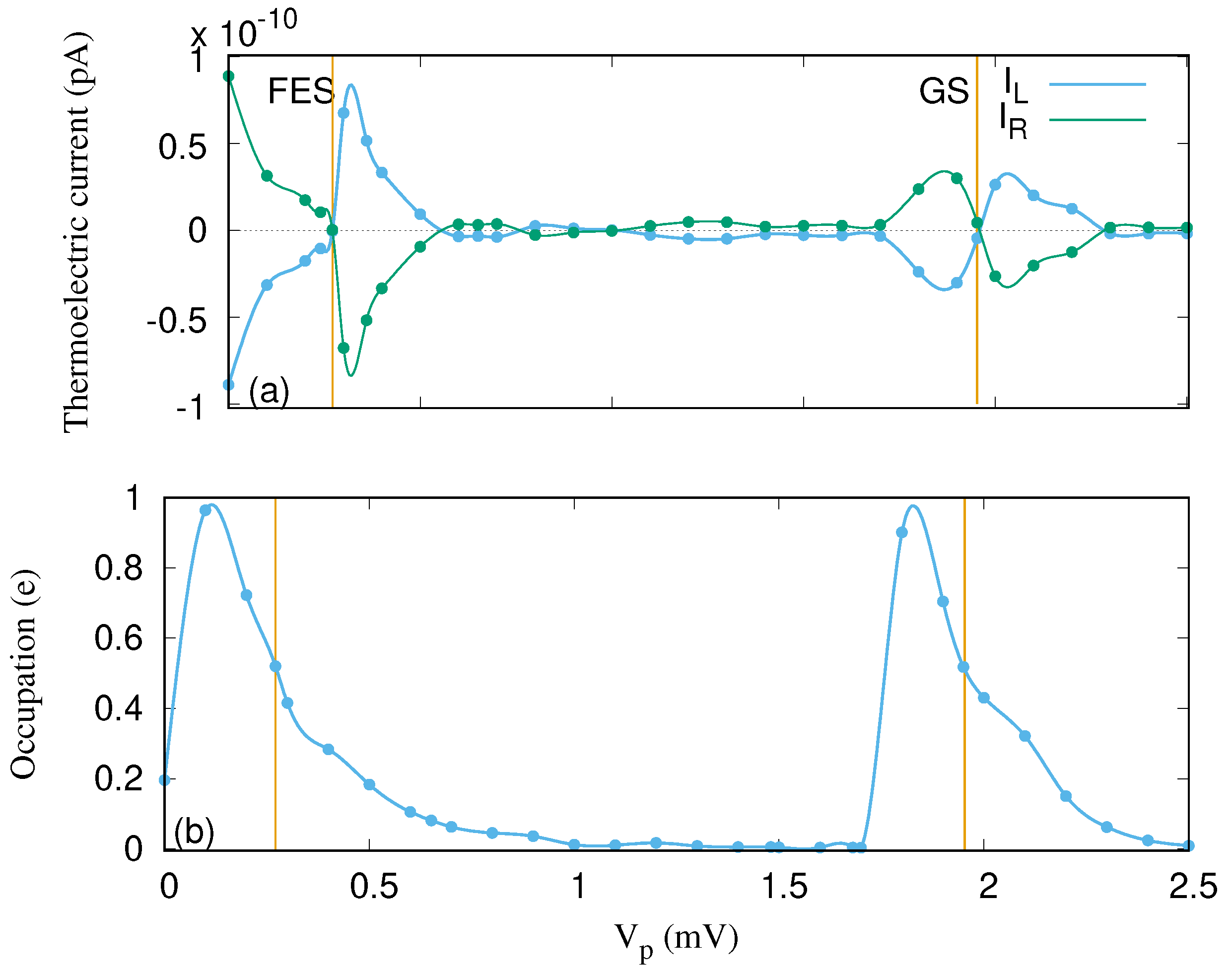 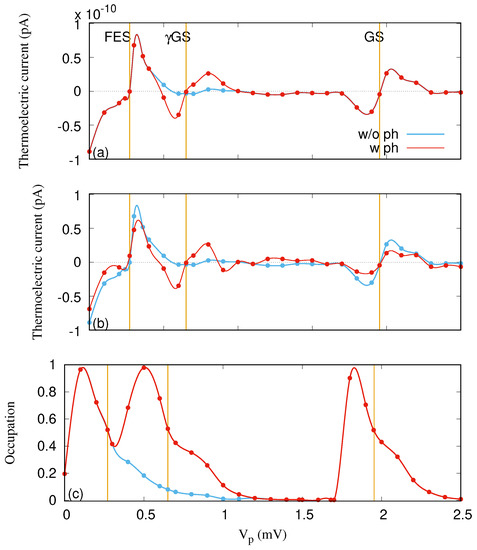 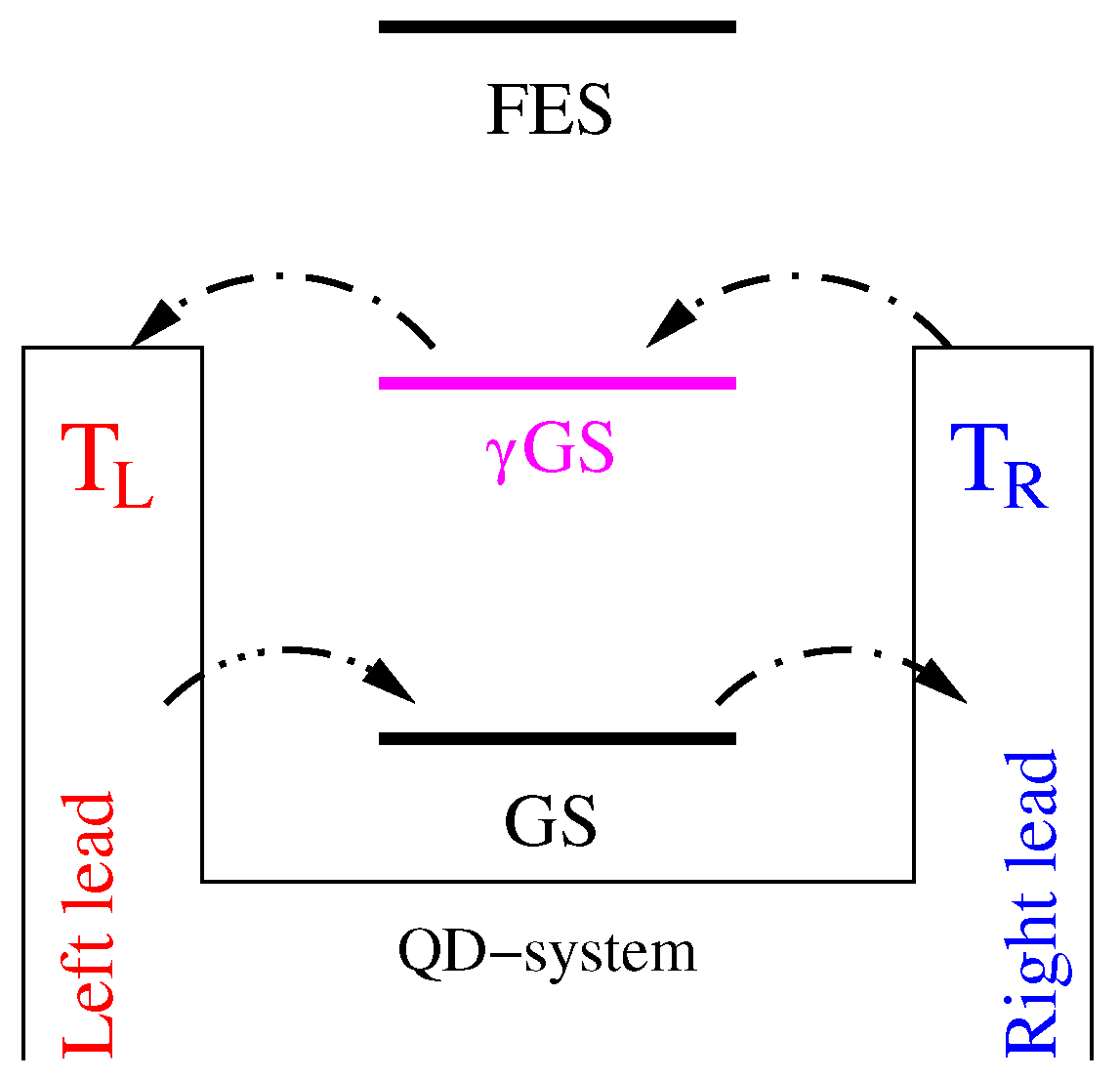 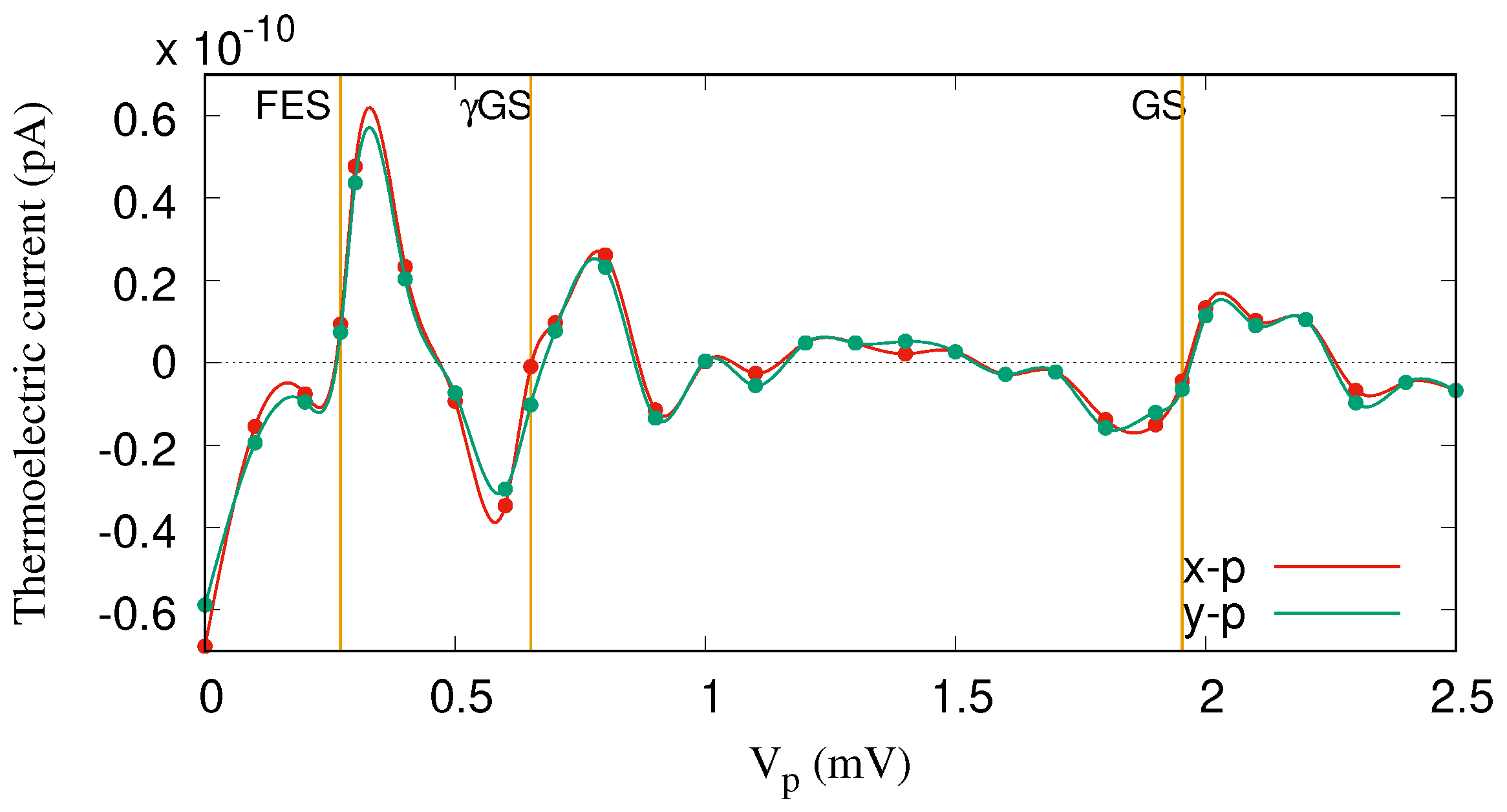 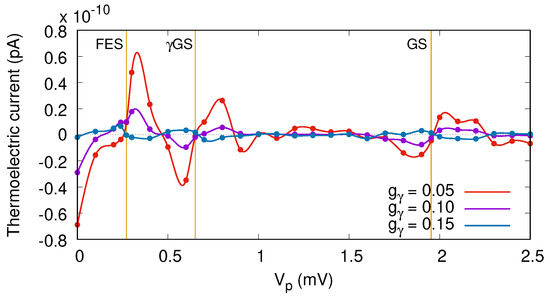 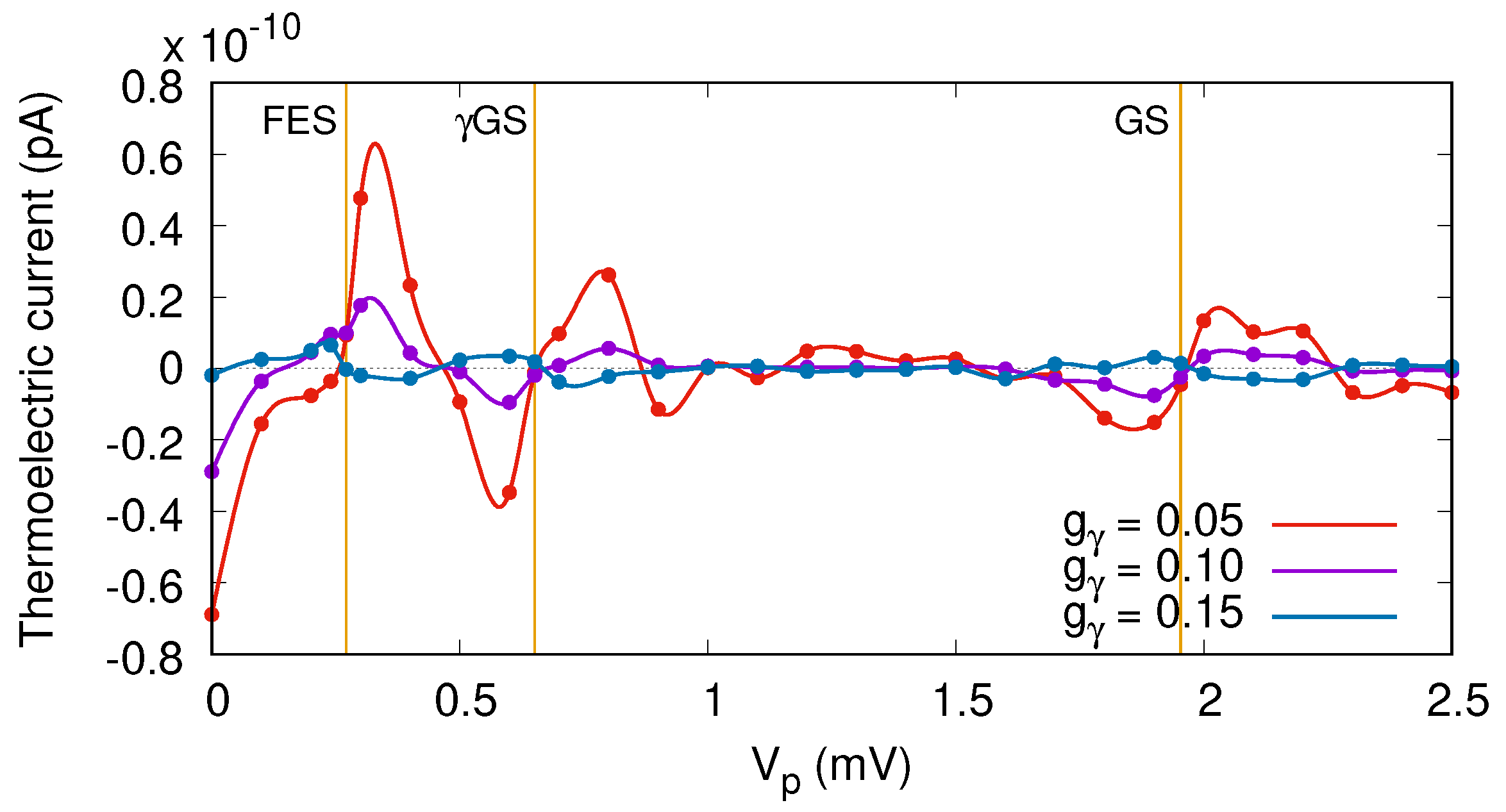 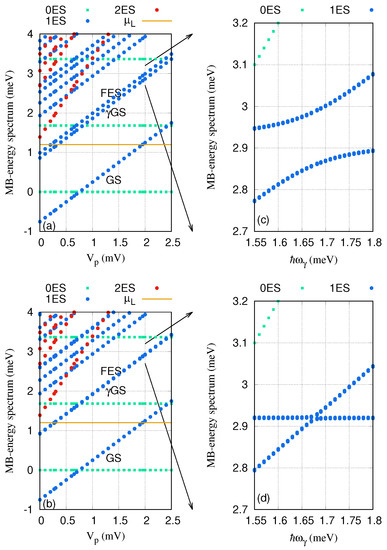 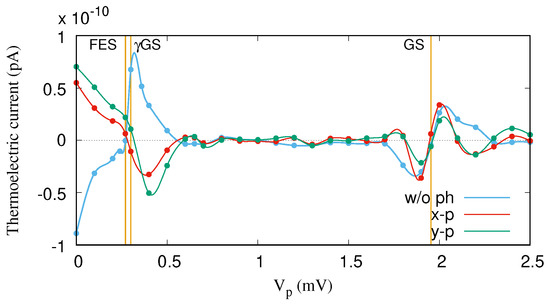