At an elevated temperature of 90 °C, a chemical bath deposition using an aqueous solution of Zn(NO3)2·6H2O and (CH2)6N4 resulted in the formation of both nanoflowers and microrods of ZnO on F-doped SnO2 glass with a seed layer. The nanoflowers and microrods were sensitized with dyes for application to the photoelectrodes of dye-sensitized solar cells (DSSCs). By extending the growth time of ZnO, the formation of nanoflowers was reduced and the formation of microrods favored. As the growth time was increased from 4 to 6 and then to 8 h, the open circuit voltage (Voc) values of the DSSCs were increased, whilst the short circuit current (Jsc) values varied only slightly. Changes in the dye-loading amount, dark current, and electrochemical impedance were monitored and they revealed that the increase in Voc was found to be due to a retardation of the charge recombination between photoinjected electrons and I3− ions and resulted from a reduction in the surface area of ZnO microrods. A reduced surface area decreased the dye contents adsorbed on the ZnO microrods, and thereby decreased the light harvesting efficiency (LHE). An increase in the electron collection efficiency attributed to the suppressed charge recombination counteracted the decreased LHE, resulting in comparable Jsc values regardless of the growth time. View Full-Text
Keywords: dye-sensitized solar cell; ZnO; nanoflowers; microrods dye-sensitized solar cell; ZnO; nanoflowers; microrods
►▼ Show Figures 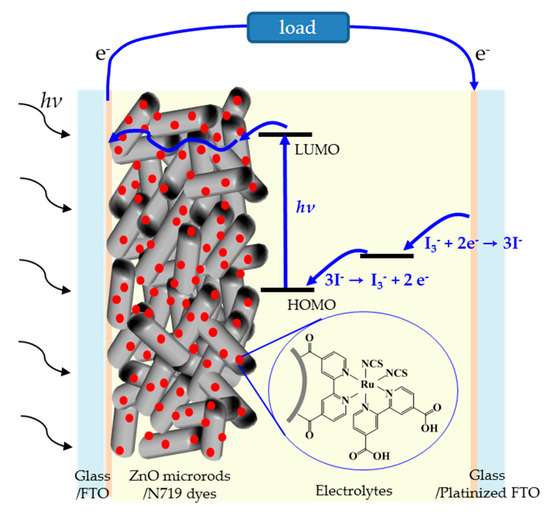