Among the large family of scanning-probe microscopy techniques, lateral-force microscopy (LFM) is an effective tool to study the atomic-scale frictional behaviors of two-dimensional (2D) materials. LFM can be used to image insulating and conducting surfaces with atomic resolution, and record tip–sample force interactions with ultrahigh precision. This ability allows for atom-specific-force mapping with piconewton and picometer resolution [1,2]. Because experimental LFM measurements are affected by interatomic interactions between the probe tip and the sample surface [3], the tip features, including its stiffness [4], asymmetry [5,6], apex structure [7,8], and chemical identity [9,10], are important in lateral-force imaging of surfaces and the characterization of frictional behaviors at the atomic scale. In general, scanning-probe microscopy/LFM measurements are thought to be more accurate with a sharper tip [11,12]. Therefore, the effect of tip radius on the frictional properties has been usually ignored in previous studies. Besides, for the various component forces exerted by sample atoms on the tip such as Van der Waals (dispersion), Coulomb (electrostatic), dipole, and atomic forces, and the shapes of the force curves differing markedly [13], it is difficult to measure the tip–sample distance in the LFM experiments using only the LFM force curves. This approach has resulted in a lack of related studies on the effect of tip–sample distance on frictional properties. Hence, related parameters in the continuum mechanical model (for instance, Prandtl–Tomlinson model) of atomic-scale friction, such as the initial value of the tip–sample interaction, are usually set to empirical values [14,15,16]. To the best of our knowledge, no work exists that correlates the detailed tip radius with the tip–sample distance as a function of the frictional properties of the 2D materials.
Molecular dynamics (MD) simulation is a powerful method to reveal supplemental information in an endeavor to eliminate the limitations of LFM experiments. Various interaction potentials have been successfully developed to simulate materials such as ionic compounds [17], metals [18], and covalent materials [19]. The strength of MD simulation is that it can track the evolution of each atom’s configuration and provide a detailed mechanism of atomic-scale friction phenomena [20].
We conducted MD simulations of the atomic-scale friction of a typical 2D single-layer molybdenum disulfide (SLMoS2), which has been widely used in the applications of optoelectronics and electronics [21,22,23] due to its unique photoelectric and mechanical properties. The effects of tip radius and vertical tip–sample distance on the frictional properties were analyzed and discussed. Ours is the first study that indicates that the characterization of atomic-scale frictional properties depends on a coupling of tip radius and tip–sample distance, and the study presents novel insight into LFM nanomanipulation when studying the atomic-scale frictional behaviors of 2D materials.

SLMoS2 is composed of a hexagonal honeycomb lattice in which a layer of Mo atoms is sandwiched covalently between top and bottom layers of S atoms. The perpendicular distance between the two layers of S atoms is ~3.24 Å. A rectangular SLMoS2 film (230.31 Å × 259.61 Å in the x–y plane) was defined for MD simulations of sliding. The SLMoS2 film was fixed in all (x, y, and z) directions after system relaxation, and periodic boundary conditions were applied during the simulation.
The MD simulations were conducted by using a large-scale atomic/molecular massively parallel simulator (LAMMPs) (Albuquerque, NM, US) [24]. The interaction between carbon atoms in the diamond probe is described with the adaptive intermolecular reactive empirical bond-order (AIREBO) (Clemson, SC, US) potential which has been used to predict the mechanical properties of carbon structures in previous studies [25]. The atomic interactions between the SLMoS2 and the diamond probe are described by using the Lennard–Jones potential (Leigh, Lancashire, UK), which has been verified in our previous work [26]. The atomic interactions in SLMoS2 are described with reactive empirical bond-order (REBO) (Raleigh, NC, US) potentials, which have been demonstrated to be accurate when describing the mechanical properties of SLMoS2 [27]. Before the sliding process, the system was relaxed by energy minimization using the conjugated-gradient method and the time step was set to 1 fs. A schematic diagram of the sliding on SLMoS2 is shown in Figure 1a. Conical probes with various tip curvature radii of 1, 2, 3, 4, 5, 6, 7, 8, 9 and 10 Å (total atoms of 36, 291, 884, 2150, 4288, 7515, 12,021, 18,071, 25,846 and 34,302 respectively) were generated to study the effect of tip radius on the frictional properties of SLMoS2 film, and the sliding rate was set to 0.2 Å/ps. All the simulations were thermostated at 0.1 K.
The distance between the lowermost atoms of the tip and the uppermost layer of S atoms should be in an appropriate range for the following reasons: (1) If the distance is too large, the repulsive force of the tip-MoS2 interaction could be so weak that it may be significantly affected by thermal fluctuations; and (2) if the distance is too small, the uppermost atoms of MoS2 may collapse during the sliding process due to the large repulsive force. For instance, we performed an MD simulation of the nanoindentation on a SLMoS2, and the tip radius was set to 1 Å. We chose a reasonable tip–sample distance of 1.47 Å, which allows the tip to reach the near-contact region where the Pauli repulsion governs the tip-MoS2 interaction [28], and ensures that the tip is not very close to the uppermost MoS2 atoms. The van der Waals force–distance curve of the nanoindentation is shown in Figure 2. Besides, we also investigated the effect of tip–sample distance on the frictional properties with five vertical distances (1.27, 1.47, 1.67, 2.27, and 2.67 Å) and three different tip radii (1, 3, and 7 Å). The tip moves along the armchair (AC) and zigzag (ZZ) orientations. The lattice constants of the SLMoS2 and sliding paths are shown in Figure 1b.
We used the Open Visualization Tool (OVITO) (Darmstadt, Hesse-Darmstadt, Germany) to visualize and analyze atomistic simulation data.

M.L. and C.G. conceived the idea and designed the simulations. M.L. led the experiments. H.P., W.Z., L.L. contributed to data analysis and interpretation. H.P. and M.L. wrote the paper, and all authors provided feedback. 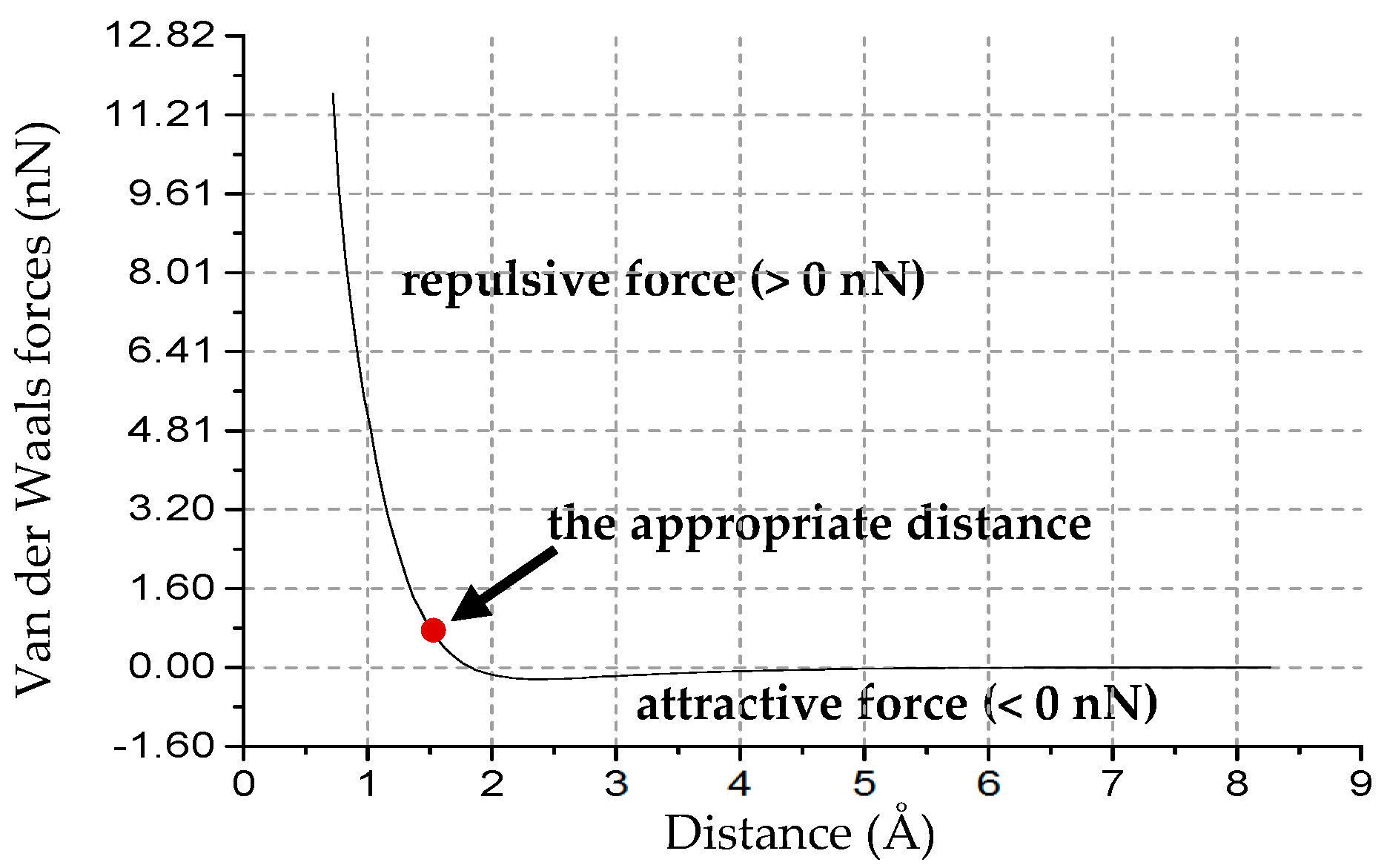 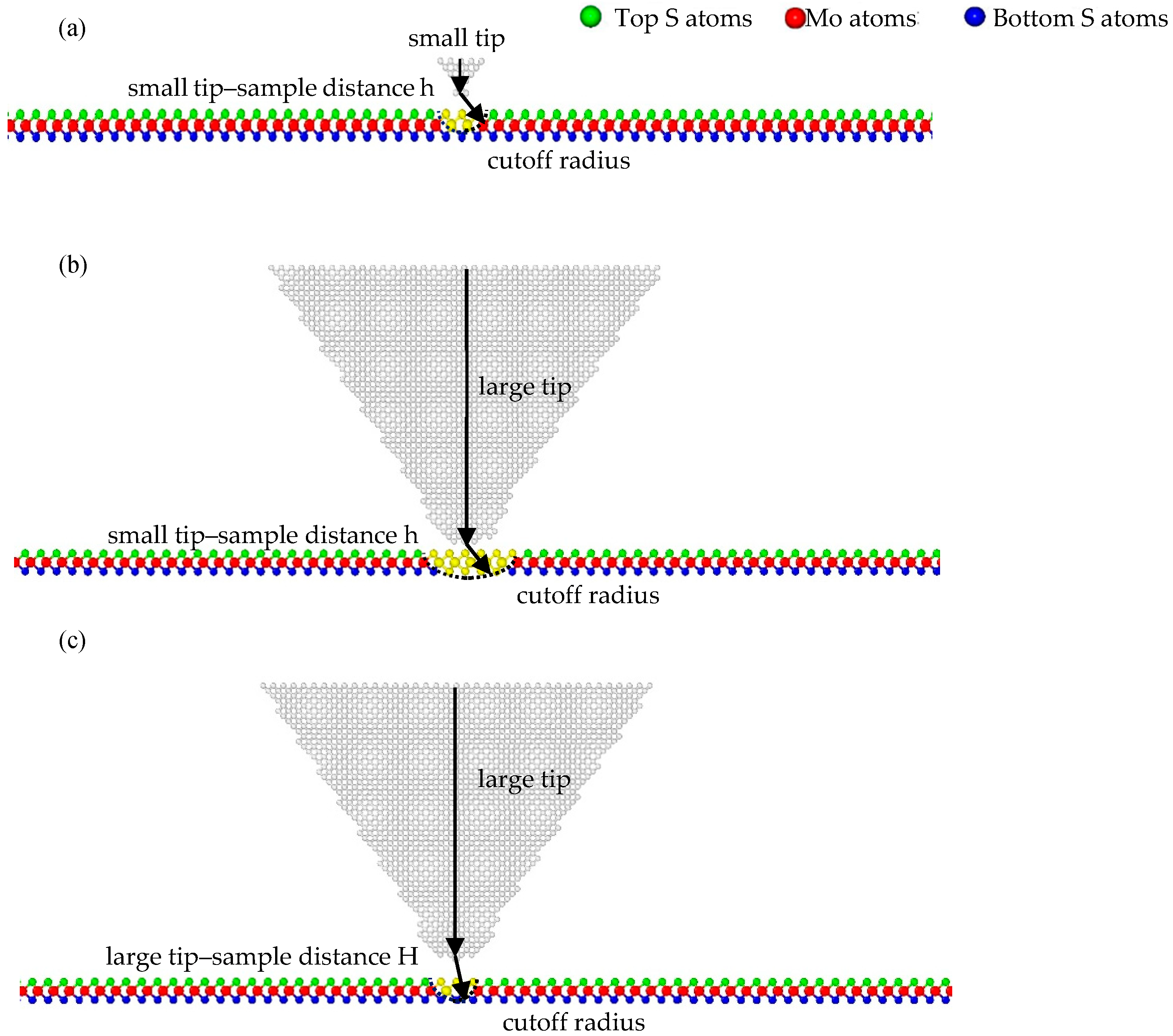