Spherical cellulose nanocrystal-based hybrids grafted with titania nanoparticles were successfully produced for topical drug delivery. The conventional analytical filter paper was used as a precursor material for cellulose nanocrystals (CNC) production. Cellulose nanocrystals were extracted via a simple and quick two-step process based on first the complexation with Cu(II) solution in aqueous ammonia followed by acid hydrolysis with diluted H2SO4. Triclosan was selected as a model drug for complexation with titania and further introduction into the nanocellulose based composite. Obtained materials were characterized by a broad variety of microscopic, spectroscopic, and thermal analysis methods. The drug release studies showed long-term release profiles of triclosan from the titania based nanocomposite that agreed with Higuchi model. The bacterial susceptibility tests demonstrated that released triclosan retained its antibacterial activity against Escherichia coli and Staphylococcus aureus. It was found that a small amount of titania significantly improved the antibacterial activity of obtained nanocomposites, even without immobilization of model drug. Thus, the developed hybrid patches are highly promising candidates for potential application as antibacterial agents. View Full-Text
Keywords: titania; cellulose nanocrystals; drug delivery; bioactivity; triclosan titania; cellulose nanocrystals; drug delivery; bioactivity; triclosan
►▼ Show Figures 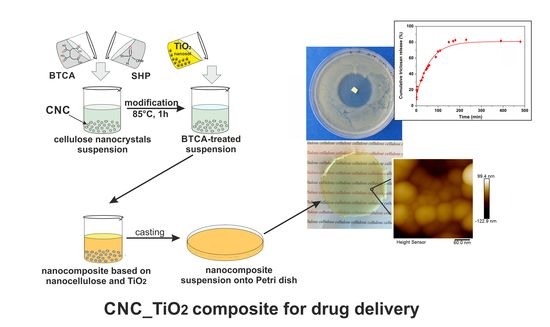