In the past few years, with the rapid development of the economy, most factories have been eager to maximize profits at the expense of the environment. In recent years, environmental pollution has drawn public attention because pollution has generated fear for human health and future generations’ ability to live on this planet [1,2]. This is especially true for water pollution, which is mostly attributable to organic dyes released by chemical plants [3,4]. Photocatalysts demonstrate pronounced potential as drivers of chemical reactions when illuminated by sunlight at room temperature [5,6]. Photocatalytic degradation of organic pollutants in water is used as a new wastewater treatment technology, and has become a research hotspot in the wastewater treatment field [7,8]. The current research of photocatalytic technology is mainly concentrated on conventional semiconductor photocatalysts, especially TiO2 based materials [7]. Although TiO2 has many advantages, such as a wide range of sources and a low price, it can only use the ultraviolet part of the sun. Ultraviolet light accounts for only 5% of solar energy, which limits its practicality. Therefore, finding the catalyst that can respond to visible light, more than 43% of the solar energy, has become the main direction of research [9,10]. It is well known that silver nanoparticles (AgNPs) not only exhibit considerable ultraviolet (UV) light absorption due to the inter-band transition, but also can perform under visible light attributed to the so-called surface plasmon resonance (SPR) effect [11,12]. Hence, silver NPs are promising photocatalysts that exert the whole solar spectrum. Interestingly, it should be noted that various porous TiO2-Ag nanostructures, including hollow microspheres and nanotube arrays, have demonstrated enhanced visible light photocatalytic activity for reducing the variety of dyes in water and enhancing water splitting [13,14,15,16,17,18,19,20,21,22,23,24,25,26,27,28].
On the other hand, a nanofibrous composite membrane has the advantage of easy recycling in the field of wastewater adsorption treatment. Electrospinning is considered a simple and versatile technique to fabricate polymeric micro/nanofibers continuously [29,30]. Prepared fibrous materials illustrate many outstanding properties, such as large specific surface area [31,32], favorable porosity [33], and superior controllable thickness [34,35]. These characteristics give the electrospun fibers potential applications as nanocatalysts. Graphene oxide (GO)-based nanocomposite fibers have attracted enormous interest due to their regulated dispersibility, large functional oxygen-containing groups, and preferred reactive positions/sites for special chemical modification [36].
By employing the merit of graphene oxide (GO)-based nanocomposites and many novel advantages of electrospun fibers in present research work, self-assembled electrospun matrical membranes of PVA/PAA/GO–[email protected] can be processed. The obtained PVA/PAA/GO-COOH membranes were synthesized using thermal treatment and the electrospinning technique while the Ag nanoparticles from the reduction of AgNO3 by ascorbic acid solution were firmly immobilized on the surface of the nanofibers with the help of hydrogen bonds and electrostatic interactions. The initial considerations for this experiment follow. First, the prepared PVA/PAA/GO-COOH system was selected as matrix materials for electrospinning due to the chemical and mechanical properties as well as the large specific surface area [37]. Second, compared with the conventional organic solvents, deionized water was used as a solvent to prepare the electrospinning solution, demonstrating low cost and environmentally-friendly features. Finally and most importantly, the Ag nanoparticles showed that they can achieve good stability between the flexible surface of fiber and efficient GO nanosheets, and perform under visible light. The strong π-π forces in GO sheets can attach the powerful adsorption for diverse dyes in water. In addition, the fixed carboxyl group within the GO nanosheet can create strong electrostatic interactions by its highly negative-charged property, which can promote the target dyes’ diffusion and enrichment.
Additionally, the prepared composite membranes acted as high-efficiency catalysts to degrade organic dyes and were easily separated from dye solutions to reuse due to their mechanical strength. This is crucial to the performance evaluation of catalysts. Moreover, presently prepared nanocomposites also have the characteristics of low cost, easy preparation, and environmental friendliness, which demonstrates important potential applications in the catalysis fields.

Graphene oxide (GO), due to its unique two-dimensional single or several-layer sp2-bonded carbon sheets, has attracted plenty of research. Other reasons for the interest in graphene oxide include its superior dispersibility and easy functionalization in wide applications. Hence, GO was selected as the key moiety of the self-assembling matrix materials for electrospinning. Silver nanoparticles are promising photocatalysts and are chosen as photocatalysts in present nanocomposites responsible for photocatalytic degradation of organic dyes. The catalytic membranes were prepared via electrospinning of matrix materials and adherence of Ag NPs. As shown in Figure 1, the preparation processes of these composite catalytic membranes were divided into two steps. First, the matrical membranes of PVA/PAA/GO-COOH were prepared through the electrospinning technique and the prepared matrical membranes were insoluble after thermal treatment, which is attributed to the crosslinking reaction between GO-COOH sheets and polymeric nanofibers. Next, the prepared insoluble membranes were modified by Ag nanoparticles when they were immersed into the AgNO3 solution with ascorbic acid. The preparation process is very environmentally-friendly, controllable, and easy to operate, which demonstrates potential large-scale applications in dye removal of wastewater.
Carboxyl-functionalized GO (GO-COOH) was first prepared according to a reported method [39], and freeze-dried in low temperature (−50 °C). The 10 wt. % aqueous solution of PVA was prepared by dissolving PVA in deionized water at 80 °C for 12 h under magnetic stirring. PAA solution (30 wt. %) was prepared in deionized water solvent under magnetic stirring at room temperature for 1 h. GO-COOH solid was then added to the above PAA solution and stirred at room temperature for an additional 1 h to obtain the solutions. The above-prepared PVA and PAA/GO-COOH solutions were then mixed with a 1:1 volume ratio and further stirred at room temperature for 1 h to achieve a homogeneous solution for electrospinning [40]. For the electrospinning process, a syringe connected to a stainless steel needle with an inner diameter of 0.6 mm was used to load 10 mL of the above PVA/PAA/GO-COOH precursor solution. During electrospinning, a voltage of 20 kV and a flow rate of 0.5 mL h−1 were applied to the spinneret. The produced electrospun nanofiber composite was deposited on a flat aluminum collector placed 15 cm away from the needle, and then dried in a vacuum oven at room temperature for 24 h, as demonstrated in Figure 1. After that, the obtained membrane samples were heated at 120 °C for 3 h to develop a heat-induced crosslinking reaction between carboxyl acid groups in PAA/GO-COOH components and hydroxyl groups in PVA molecules.
The designed PVA/PAA/[email protected] nanocomposites were prepared by modifying literature reports [41]. After the heating treatment at 120 °C and the crosslinking reaction, PVA/PAA/GO-COOH membranes change to insoluble material in the water through the esterification reaction from carboxylic acid groups and hydroxyl groups. Next, the obtained insoluble composite membranes were dipped into silver nitrate solution with concentration of 25 mg mL−1 with mild stirring at room temperature. 1.0 mL of vitamin C solution (15 mg mL−1) was added to the above solution. Afterwards, the reduced AgNPs were gradually anchored on the prepared insoluble composite membranes. Thus, the as-prepared PVA/PAA/[email protected] nanocomposite membranes were regulated by changing the immersed time (30 min, 1 h, 5 h, respectively). After the immersion step, the composite membranes were thoroughly washed with deionized water several times to remove the free/non-adhered AgNPs, and dried in vacuum at 80 °C for 24 h.

To estimate the photocatalytic activity of the PVA/PAA/[email protected] nanocomposites at room temperature, 30 mg of a freshly prepared PVA/PAA/[email protected] nanocomposite catalyst was added to 100 mL dye solutions that contains RhB (4 mg mL−1) and MB solution (10 mg mL−1), respectively. After dispersing catalyst materials using magnetic stirring, the mixed solution was stirred under dark conditions for 30 min to reach adsorption equilibrium state. After that, A UV lamp (7 mW/cm2, wavelength range of 360–370 nm; LUYOR-3405; Shanghai LUYOR Co. Ltd., Shanghai, China) was used to irradiate the obtained mixed solution at a 40 cm distance from a light source to liquid surface. The use of a cold light source in a UV lamp can keep the temperature of the solution below 40 °C even after working for 24 h. The dye concentrations in solutions were measured and calculated at different time intervals. For the control group of PVA/PAA/GO-COOH nanocomposite, similar experimental procedures were adopted except for the irradiation of the LV lamp. Upon removal of the solid catalytic samples using the centrifugation process, the supernatant solutions were measured via a 752 UV-vis spectrometer obtained from Sunny Hengping scientific instruments at wavelengths of 632 nm (MB) and 554 nm (RhB) with the pre-established calibration curves, respectively. Thus, the percentage of dye degradation (K) was calculated using Equation (1) where K represents the percentage of degradation; A0 represents the absorbance of the original solution; AT indicates the solution absorbance at any time. In the next recycling experiments, the as-prepared PVA/PAA/[email protected] nanocomposite membranes (30 mg) were added into 100 mL MB solution (10 mL mL−1) under mild stirring. After 4 h of photocatalytic reaction under light irradiation, the composite membrane materials were washed completely with ethanol/deionized water several times. The photocatalytic processes were investigated and repeated for eight consecutive cycles by the same membrane and initial fresh MB solution.

In addition, to further assess the dye degradation capacities of the fresh prepared composite membranes, the kinetic experiments of the as-prepared PVA/PAA/[email protected] nanocomposites were measured and the results are shown in Figure 7. Two different models of dyes, called MB and RhB, were selected to evaluate catalytic performance of the obtained materials. Additionally, the present catalytic experiments were measured and repeated three times. Classical kinetic models were utilized to demonstrate the present catalytic process through the following formulas:
The pseudo-first-order model
The pseudo-second-order model where qe and qt are the dye degraded amount (mg/g) at equilibrium and time t, respectively, and the k1 or k2 values represent the kinetic rate constants. The kinetic results (Table 1) can be appropriately characterized by either the pseudo-first-order model with a correlation coefficient (R2 > 0.9945) or the pseudo-second-order model with a correlation coefficient (R2 > 0.9988). Compared to the control group of PVA/PAA/GO-COOH nanocomposite without Ag modification, the removal performances of the model dyes were significantly enhanced in the experiment group.
On the other hand, good recovery and stability are expected for the large-scale application of composite nanomaterials for wastewater treatment. Here, we investigate the potential application of the obtained PVA/PAA/[email protected] nanocomposite materials for MB removal. The results indicate that the catalytic amount toward MB stays at about 26.32 mg/g (about 99.8%, compared to 26.36 mg/g in the first catalytic process) for PVA/PAA/[email protected] nanocomposite membranes after eight consecutive cycles, as presented in Figure 8. In other words, the PVA/PAA/[email protected] nanocomposite membrane remained vigorous after eight cycles with repeated elution. This demonstrates excellent stability and reutilization of the composite materials [70]. Such outstanding catalytic performance of the [email protected] membrane benefits from the use of the electrospun membrane as a support for the Ag catalysts. In summary, the prepared composite membrane materials can potentially be applied for wide wastewater treatment.

Novel multifunctional catalysts of PVA/PAA/[email protected] nanocomposite membranes have been developed by modifying Ag nanoparticles on electrospun PVA/PAA/GO-COOH nanofibers via an eco-friendly and self-assembled process. The prepared PVA/PAA/GO-COOH nanocomposites provide beneficial support for AgNPs to be loaded on and effectively avoid agglomeration of AgNPs with improved stability for the next catalytic degradation application. Then, the strong π–π forces in GO sheets and the fixed highly negatively-charged carboxyl group within GO nanosheet promote the target dyes’ diffusion and enrichment via the powerful adsorption for diverse dyes and strong electrostatic interactions. For the catalytic degradation of MB, the prepared PVA/PAA/[email protected] nanocomposite membranes demonstrated significant catalytic activity, even after eight cycles of catalytic degradation at room temperature. The present work thus offers a novel approach for designing and processing new Ag nanoparticle-containing composite materials for catalytic applications in wastewater treatment.

This work was financially supported by the National Natural Science Foundation of China (nos. 21473153 and 51771162), the Support Program for the Top Young Talents of Hebei Province, China Postdoctoral Science Foundation (no. 2015M580214), and the Scientific and Technological Research and Development Program of Qinhuangdao City (no. 201701B004). 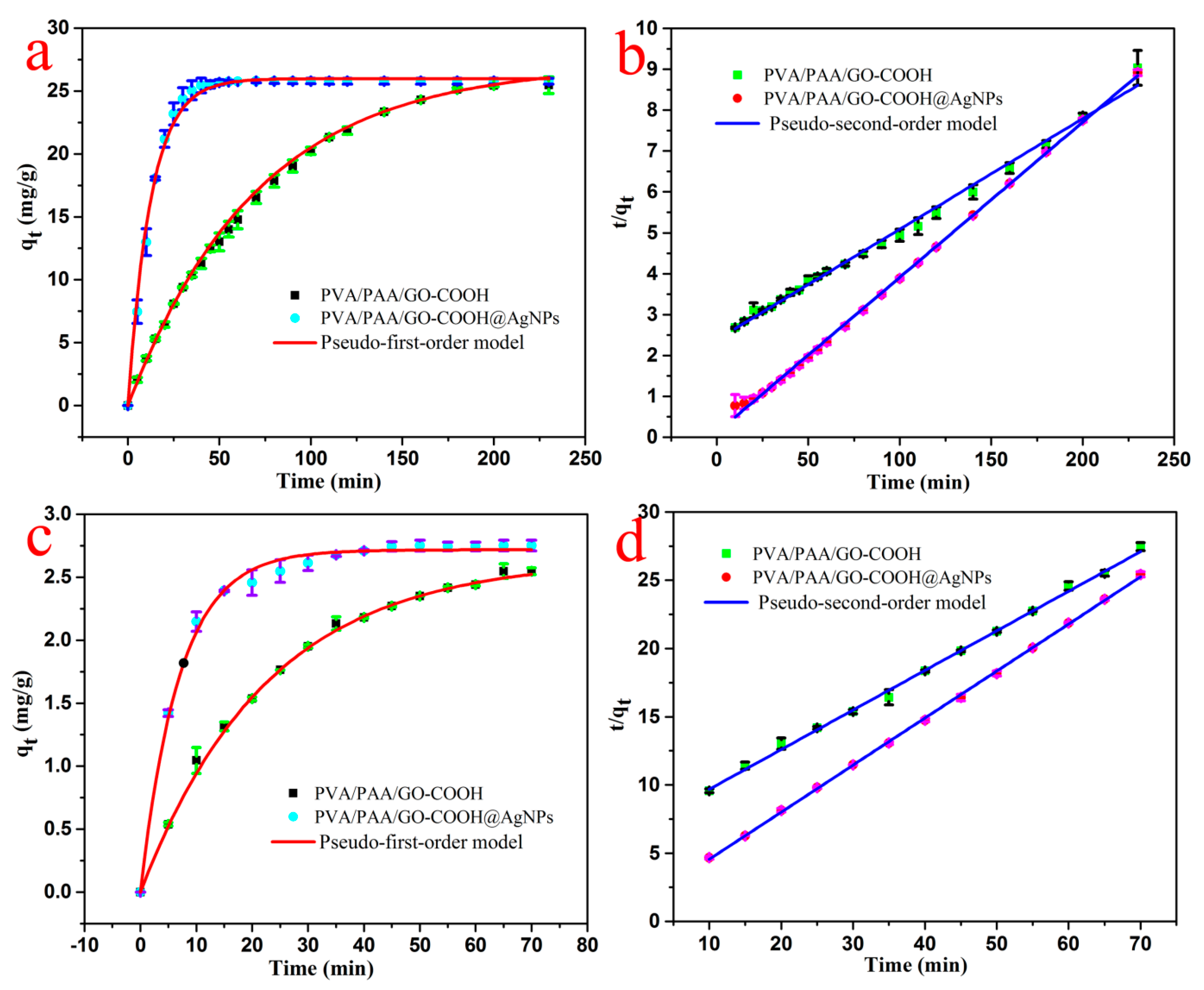