This study presents a new bionanocomposite coating on poly(ethylene terephthalate) (PET) made of pullulan and synthetic mica. Mica nanolayers have a very high aspect ratio (α), at levels much greater than that of conventional exfoliated clay layers (e.g., montmorillonite). A very small amount of mica (0.02 wt %, which is ϕ ≈ 0.00008) in pullulan coatings dramatically improved the oxygen barrier performance of the nanocomposite films under dry conditions, however, this performance was partly lost as the environmental relative humidity (RH) increased. This outcome was explained in terms of the perturbation of the spatial ordering of mica sheets within the main pullulan phase, because of RH fluctuations. This was confirmed by modelling of the experimental oxygen transmission rate (OTR) data according to Cussler’s model. The presence of the synthetic nanobuilding block (NBB) led to a decrease in both static and kinetic coefficients of friction, compared with neat PET (≈12% and 23%, respectively) and PET coated with unloaded pullulan (≈26% reduction in both coefficients). In spite of the presence of the filler, all of the coating formulations did not significantly impair the overall optical properties of the final material, which exhibited haze values below 3% and transmittance above 85%. The only exception to this was represented by the formulation with the highest loading of mica (1.5 wt %, which is ϕ ≈ 0.01). These findings revealed, for the first time, the potential of the NBB mica to produce nanocomposite coatings in combination with biopolymers for the generation of new functional features, such as transparent high oxygen barrier materials. View Full-Text
Keywords: coefficient of friction; haze; mica; modelling; optical properties; oxygen barrier; pullulan coefficient of friction; haze; mica; modelling; optical properties; oxygen barrier; pullulan
►▼ Show Figures 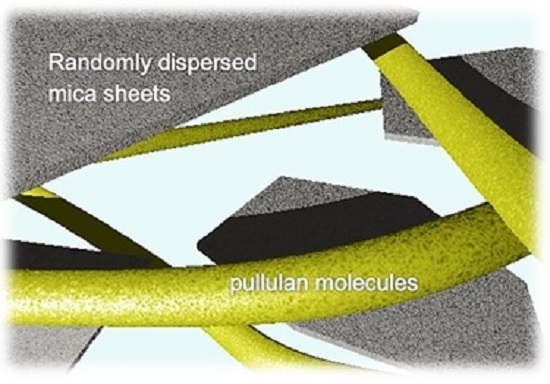