Drug delivery is an approach in which a pharmaceutical compound is safely transported through the body to reach its target. Various techniques may be used, i.e., increasing the solubility of an insoluble drug, enhancing the duration of drug presence in the body, or optimizing the therapeutic effect [1]. A drug delivery system consists of two main parts: a carrier and a drug. Its favorable features are tuned by choosing the proper drug and carrier. Since different drugs require different treatments, numerous carriers have been incorporated. Until today, many carriers have been utilized, such as inorganic mesoporous silica, organic polymers, micelles, liposomes, and dendrimers [2,3,4,5,6]. However, the application of these conventional methods is limited due to their low cargo capacity and unchangeable release kinetics [7].
Metal-organic frameworks (MOFs) are able to overcome the limitations of organic and inorganic carriers [8]. The diverse methods that are used for the synthesis of MOFs provide the opportunity to design and control the chemical and physical properties of these materials [9,10]. The assembly of inorganic clusters and various organic linkers by strong bonds build MOFs. Their high porosities (φ up to 6 nm, pore volume up to 2.3 cm3 g−1) makes them great candidates for encapsulating pharmaceutical compounds and biomedical applications. The surface area could be further enhanced by reducing the dimensions to nanoscale [11,12]. Better drug interactions will be achieved as a consequence of engineering the structure, porosities, and hydrophobic/hydrophilic entities [13].
MIL-100 (MIL: Materials of Institut Lavoisier) was isolated as a polycrystalline powder from iron and benzene tricarboxylic acid by Horcajada et al. [14]. Large pores and a high surface area makes MIL-100 an ideal carrier for drug delivery purposes [15]. It has previously been used for encapsulating several drugs such as doxorubicin, ibuprofen, caffeine, and aspirin in high loading capacities compared to conventional methods [16,17].
The tetracycline class of compounds has different applications, like broad spectrum antibiotics that act against gram-positive and gram-negative bacteria. Although the bacterial resistance decreased, the demand for these antibiotics, they remained especially useful in the treatment of various bacterial infections such as chlamydia, acne, mycoplasma, periodontitis, and rickettsia. More recently, aspects of their “non-antibiotic applications,” such as on/off switching of the transcription of distinct genes, were also discovered [18]. Their structure is also very interesting due to several coordination sites that can bind to metals and establish non-covalent bonds [19]. There are several reports indicating that the pharmacological behavior of these compounds depends heavily on metal coordination sites. Ions like calcium and magnesium form complexes with tetracycline compounds and modify their antibiotic activities [20,21]. Considering these facts, it is very important to deliver these compounds to their target safely and sustain release them. Domingues and her co-workers used bioactive glass as a drug delivery system of tetracycline. The amount of released Tetracycline did not exceed 25% in 80 days in SBF solution [22]. In another approach, Aguzzi and his co-workers intercalated tetracycline into layered clay mineral material and used it as a platform for release. The release profile, in this case, showed a “burst effect” and their effort for slowing the release decreased the released amount to 60% [23].
In the current research, Tetracycline hydrochloride (TC) as a soluble drug and Doxycycline monohydrate (DOX) as a slightly soluble drug in water were encapsulated separately in nano-MIL-100, and their release was investigated. This MOF was chosen due to its compatibility (pore size of 1.7 nm and 1.2 nm) with the molecular size of tetracycline hydrochloride (1.10 nm) and doxycycline monohydrate (1.10 nm). Structural analysis revealed that these two antibiotics have same dimensions, and their difference is in some functional groups (Tables S1 and S2). TC has six hydrogen bond donor and nine hydrogen bond acceptor sites. Encapsulation of these drugs in nano-MIL-100 has two important advantages: (1) eliminating any chance of complexation by protecting them from ions and shielding the available coordination sites and (2) mediating their solubility in water which affects the release profile of both drugs.

All reagents for the synthesis and analysis were commercially available from Merck and Aldrich Company (Darmstadt, Germany) and used as received. The ultrasonic synthesis was carried out on a SONIC 3MX, (maximum 160 W at 37 kHz) (Manchester, UK). The hydrothermal oven used in this research was MEMMERT UF 55 Plus (Schwabach, Germany). Melting points were measured on an Electrothermal 9100 apparatus (Stone ST15 0SA, UK). UV analyses were conducted by a Perkin Elmer–Lambda 35 UV-Visible spectrometer (Shelton, CT, USA). FT-IR spectra were recorded on Bruker Equinox 55 spectrometer (Bruker Optics, Marne la Vallée, France) equipped with a single reflection Diamond ATR system over the range of 600–4000 cm−1. Scanning Electron Microscopy (SEM) was performed on an MIRA3 TESCAN (Brno, Česká republika). The simulated XRD powder pattern based on single crystal data were prepared using Mercury software version 3.8 (Cambridge, UK). X-ray powder diffraction (XRPD) measurements were performed using a Philips PW1730 diffractometer with monochromated Cu-Kα radiation (λ = 1.54056 Å) (Amsterdam, The Netherlands), with the step size of 0.05 and 1s per step. Data analysis and FWHM calculation of XRD peaks were performed by OriginPro 2017 software (OriginLab Corporation, Northampton, MA, USA). The BET analyzer model was a BELSORP-mini II analyzer (Ankersmid Ltd., Nijverdal, Australia). Particle size distribution (DLS), PDI index, and Zeta potential were measured by Zetasizer ZEN3600 (Malvern Instruments Ltd., Worcestershire, UK).
The carrier was synthesized via Horcajada’s et al. method with some modifications [14]. One mmol (0.058 g) of Fe(NO3)3·9H2O and 0.67 mmol (0.1408 g) of BTC (Benzene tricarboxylic acid) were dissolved in 0.6 mmol (0.025 mL) HNO3, 2.28 mmol (0.04 mL) HF and 5 mL H2O. The solution was placed in the ultrasonic bath for 5 min, transferred to a steel autoclave, sealed, heated for 12 h until reached to 140 ºC, kept at that temperature for 36 h, and then cooled to room temperature in 24 h. The reddish brown sediments were then collected and washed with hot ethanol and deionized water for five or six times until all unreacted ligands washed away.
The process of encapsulating the drug was initiated after preparing the nanocarrier. Tetracycline was dissolved in 2 mL of ethanol. For acquiring a 250 mg tablet of [email protected], 0.01 g of tetracycline should be weighed against 0.03 g of the carrier. The nano-MIL-100 powder was then added to the solution of TC and steered for 48 h until all of the drug molecules entrapped in the pores of the carrier. After that, the brown solution transferred to a rotary evaporator until the solution evaporated and sediments of [email protected] remained. In the case of DOX, 0.0107 g of DOX was dissolved in 12 mL of ethanol, and the same procedure was repeated for DOX.
For the quantification of TC and DOX, loaded in MIL-100(Fe), the ethanolic TC and DOX standards for calibration were separately injected into UV capillaries. Calibration curves were prepared from standard solutions of TC and DOX separately. Samples of 1, 3, 5, 10, 15, 25, 50, 75 and 100 ppm of both drugs were prepared and analyzed by UV-Vis spectroscopy (Figures S1 and S2).
The release profile of TC was investigated in Simulated Gastric Fluid (SGF). The SGF was prepared without pepsin by the Galia et al. method [27]. The temperature of the release medium was set on 37 ℃, and the pH adjusted to 1.2. A 0.015 g sample of [email protected] was dissolved in SGF, and the whole container was placed in an oil bath. After 5 min, the container was removed from stirrer and abandoned for 2 min. Then, 0.5 mL of upper solution was collected and transferred to a test tube. For recovery, 0.55 mL of SGF was added to the container. This process was repeated at predetermined time intervals (15 min, 30 min, and 45 min, 1 h, 90 min, and 2 h, 3 h, 4 h, 5 h, 6 h, 24 h, and 48 h). The released samples were immediately transferred to UV-Vis spectrometer and prepared for analyses at a wavelength of 270 nm.
The release profile of DOX was monitored in Phosphate Buffer Saline (PBS). The PBS solution was prepared by Dulbecco and Vogot method [28]. The pH was controlled and kept at 7.4. The rest of the process and analyses were carried out similar to the case of TC.

Two antibiotics with different solubility, tetracycline hydrochloride and doxycycline monohydrate, were loaded separately on the synthesized nano-sized MIL-100(Fe), which was used as the carrier. The crystallinity and purity of MIL-100(Fe) was confirmed using several characterization techniques including XRD, FT-IR, BET and DLS, and remained intact after encapsulation of the drugs. It was revealed that nano-sized MIL-100(Fe) has a mediating effect on these antibiotics. The result of DOX release in PBS reveals that using this platform could increase the amount of released drug to 25% more than that of conventional methods. In contrast, TC, as a highly soluble drug in water, shows slower release due to the formation of stronger bonds with the carrier. The difference in the pH of the media also affected the release of drugs and resulted in a faster release for DOX compared with TC. Interestingly the slower kinetics of TC lead to 96% of the drug being released in acidic medium, which is much higher than previous reports.
A sustained release and slow kinetics of releasing of antibiotics into the body would be desirable for treatment of infections that need more time to cure. The results of this research could be followed by pharmacists who are studying methods to increase the time intervals of taking antibiotic pills orally, in order to lower the side effects of consuming too much antibiotics.

The authors wish to thank University of Tehran for its support. 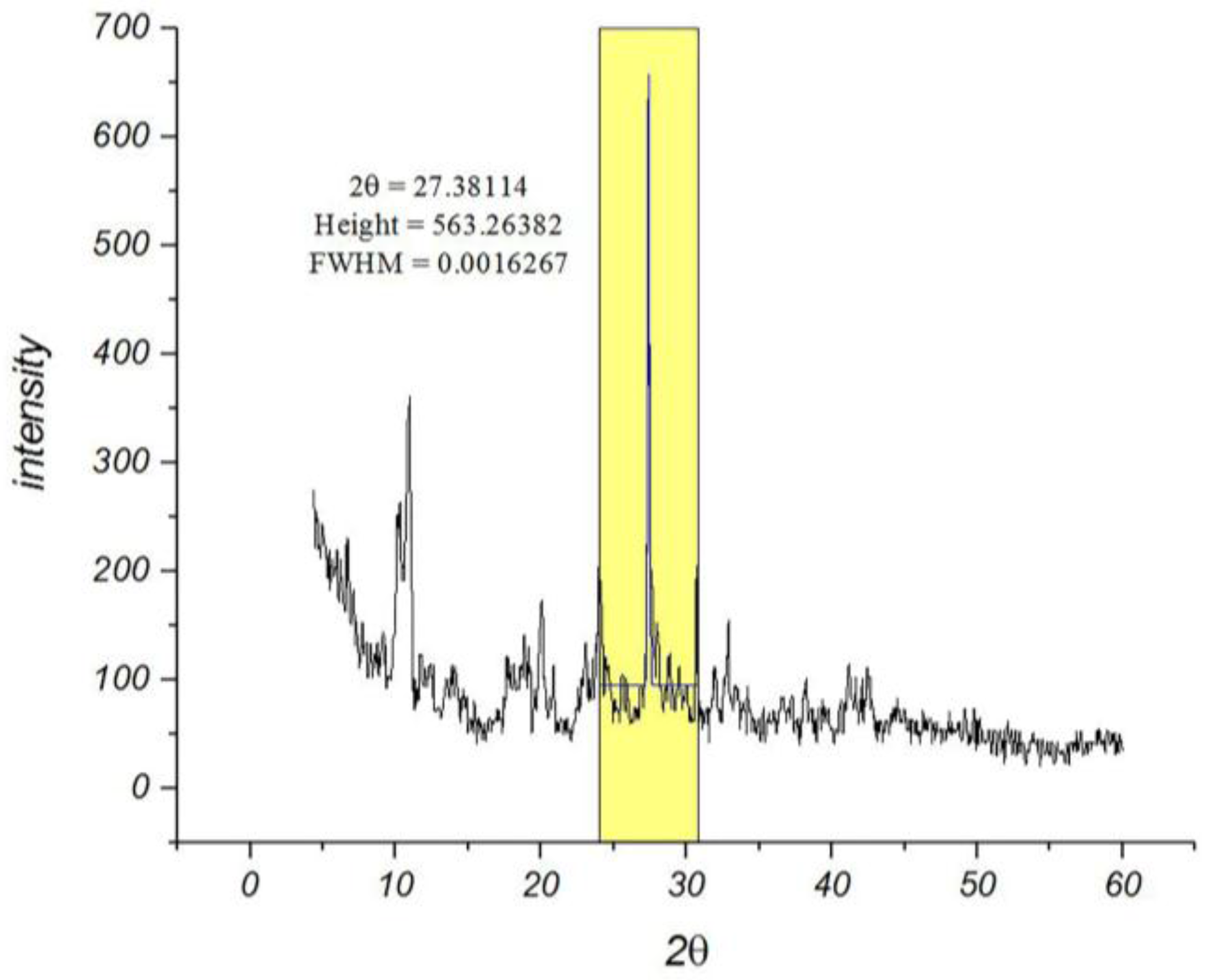 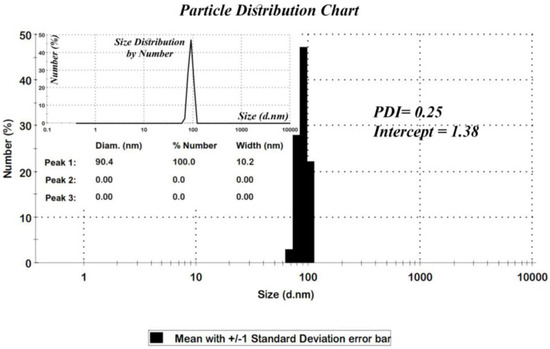 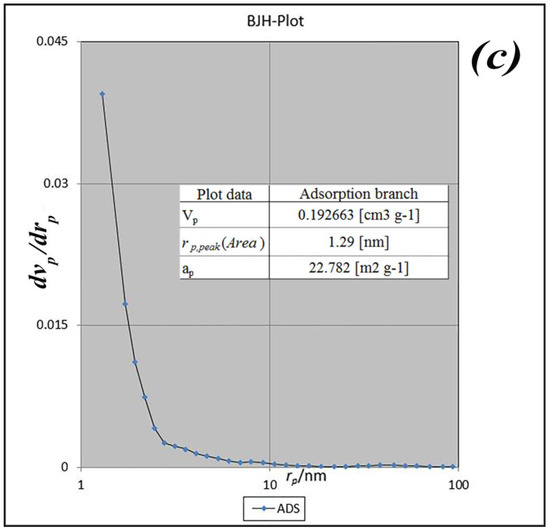 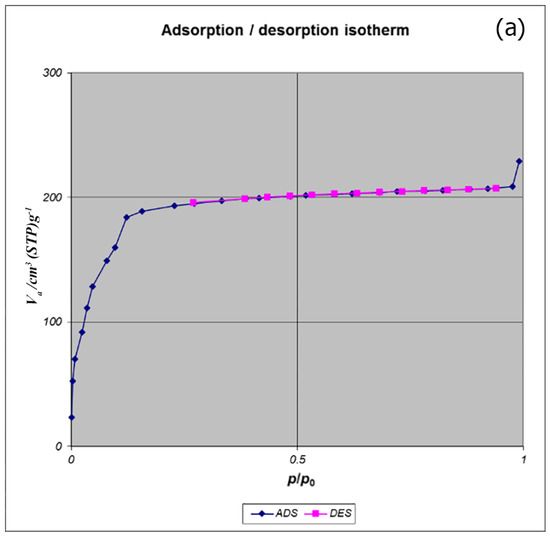 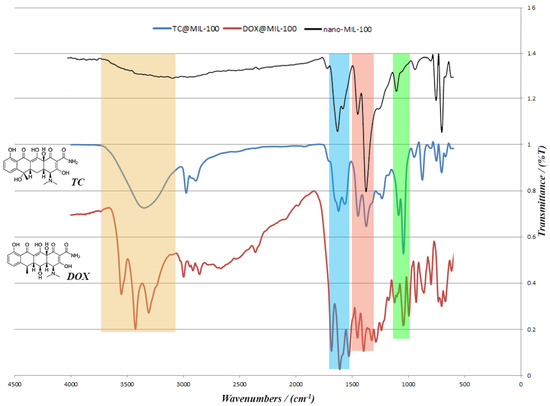 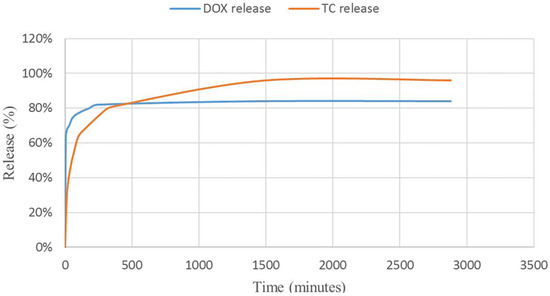 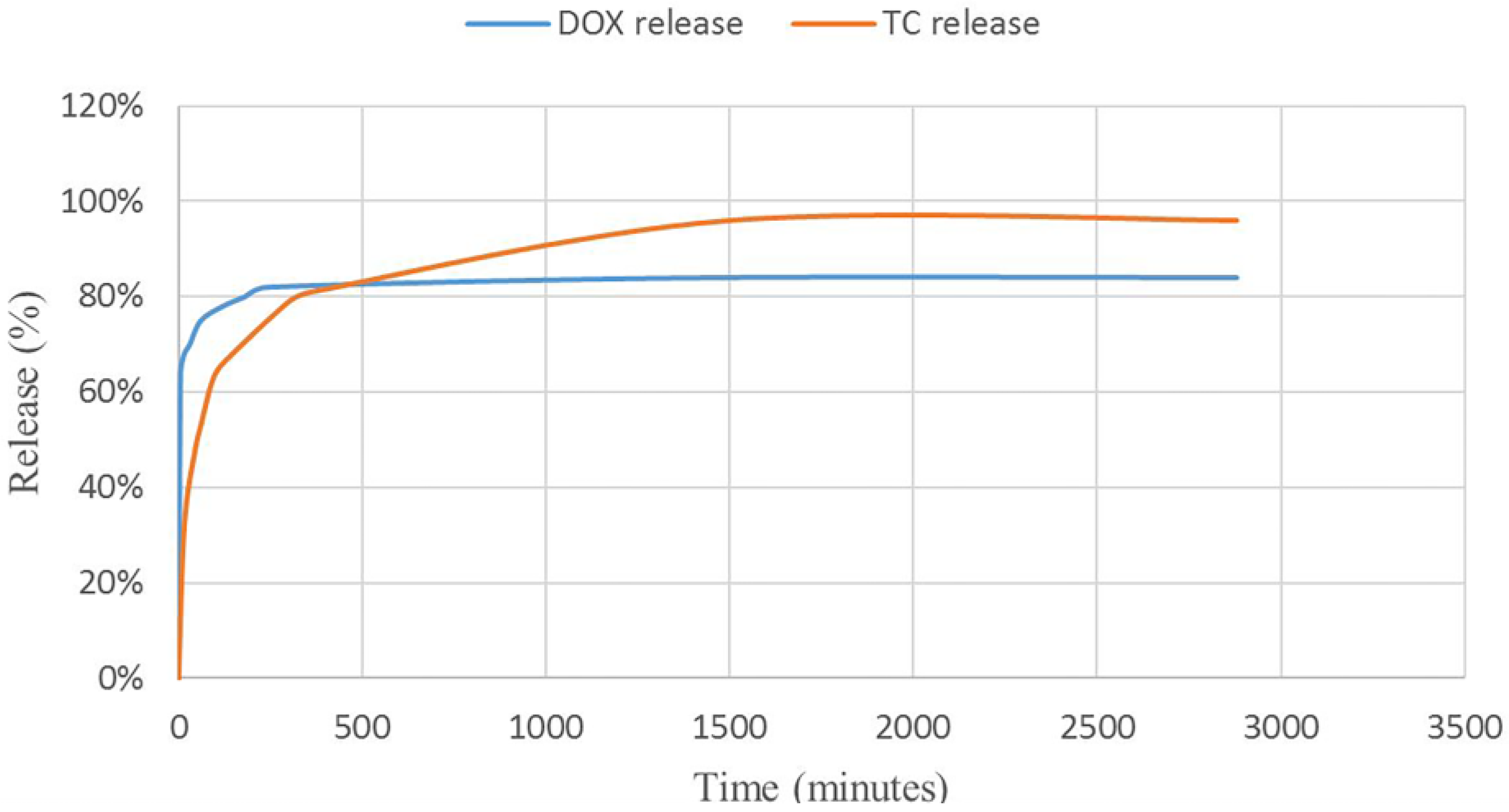