Removal of Carmine from Aqueous Solution by Carbonated Hydroxyapatite Nanorods

A new and promising biosurfactant extracted from corn steep liquor has been used for the green synthesis of gold and silver nanoparticles (NPs) in a one-step procedure induced by temperature. Most of the biosurfactants proposed in the literature are produced by pathogenic microorganisms; whereas the biosurfactant used in the current work was extracted from a liquid stream, fermented spontaneously by lactic acid bacteria, which are “generally recognized as safe” (GRAS) microorganisms. The reduction of a gold precursor in the presence of a biosurfactant gives rise to a mixture of nanospheres and nanoplates with distinct optical features. Moreover, the growth of nanoplates can be promoted by increasing the reaction temperature to 60 °C. In the case of silver, the biosurfactant just induces the formation of pseudo-spherical NPs. The biosurfactant plays a key role in the reduction of the metal precursor, as well as in the stabilization of the resulting NPs. Furthermore, the antimicrobial activity of the resulting silver colloids has been analyzed against Escherichia coli, Pseudomonas aeruginosa and Staphylococcus aureus. The biosurfactant stabilized NPs slightly increased the inhibition of E. coli in comparison with citrate stabilized Ag NPs. The use of this biosurfactant extracted from corn steep liquor for the synthesis of metal NPs contributes to enhancing the application of green technologies and increasing the utilization of clean, non-toxic and environmentally safe production processes. Therefore, it can help to reduce environmental impact, minimize waste and increase energy efficiency in the field of nanomaterials. View Full-Text
Keywords: biosurfactant; corn stream; silver NPs; gold NPs; green synthesis biosurfactant; corn stream; silver NPs; gold NPs; green synthesis
►▼ Show Figures 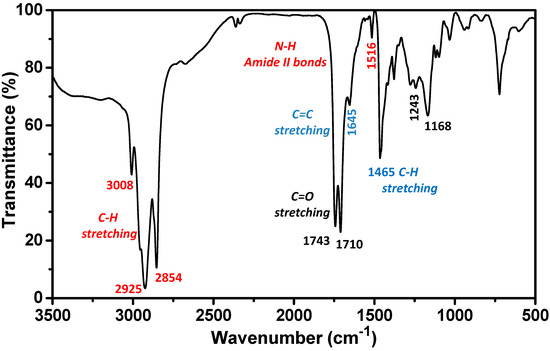