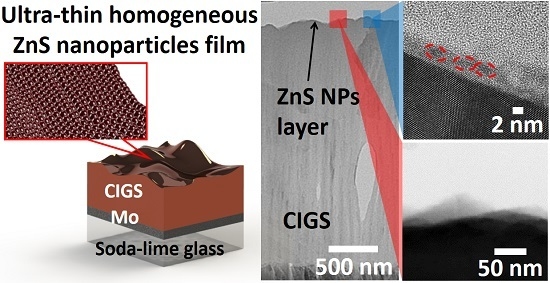 Fast, cost-efficient deposition of ultra-thin, high-quality crystalline films on rough or textured surfaces [1] over a large area is needed for semiconductor manufacture. Atomic layer deposition (ALD) has been regarded as inherently useful for thin-film deposition with such strict criteria compared to alternative methods such as chemical vapor deposition (CVD) and physical vapor deposition (PVD) because ALD process allows layer thickness control to nanometer scale [2]. ALD involves a complex multi-cycle chemical process based on self-saturating vapor-phase vacuum deposition. A cycle starts with precursor chemisorption onto the substrate surface, followed by formation of a thin film as reactant is injected [2]. Applications for ALD span metal–oxide–semiconductor field-effect transistor (MOSFET), dynamic random access memory (DRAM), biosensors, waveguide, LEDs and solar cells [2,3]. However, the gaseous-phase growth nature of ALD can limit the crystallinity of the thin film, unless a certain thickness of thin film or certain growth temperature has been achieved [4]. Usually, amorphous-phase material can be partially observed in an ALD-prepared thin film, and can deteriorate device operation, for example causing leakage current in MOSFET [5].
On the other hand, due to the self-limiting nature of ALD, one cycle of ALD deposition only delivers a thin-film layer with a thickness of a few angstroms; therefore, ALD-prepared thin film with over 100 nm thickness could take hours to obtain [3], and its deposition rate depends strongly on the gas source used, which is very expensive and leads to the trade-off between cost and quality source. Also, the ALD-grown thin film can be thermally decomposed or desorbed as growth temperature falls out of the ALD temperature window, leading to requirement of careful control over growth temperature [6]. In terms of hardware setup, many ALD machine setup parameters must be carefully considered to avoid problems, including early condensation of gas source during injection to the chamber, inappropriate design of gas shower head that deters large-area deposition in short growth time, inadequate speed of vacuum pumps extends the time for each ALD deposition cycle. Moreover, due to the nature of ALD, a large amount of precursor/reactor gas has to be pumped and wasted. The need for toxic gaseous waste disposal also goes against cost-efficiency and environmental protection. Overall, the ALD vacuum process is not preferable for deployment to many practical applications on an industrial scale due to its significant cost, complicated procedure and low throughput.
In this paper, we provide a radical new method to form a thin layer of dense sulfide single-crystal nanoparticles such as ZnS, InS, and MoS2. The single-crystal nanoparticle layers are synthesized by chemical thermolysis using non-vacuum thermal decomposition by heating a single-source molecular precursor solution drop cast on a substrate. During the synthesis, coalescence of single-crystal nanoparticles forms an ultra-thin, large-area, highly conformal, single-crystal film. This process has the advantages of little liquid waste, little material loss, rapid deposition, and precise control of thickness down to a few nanometers. The new deposition method is also capable of producing thin films with thickness up to 100 nm, and can be thicker if a cyclic process is employed. We propose that this process is competitive to and can potentially replace current established thin-film deposition techniques such as ALD and CBD. Additionally, low temperature fabrication process is becoming more important, due to the fact that the current complementary Metal-Oxide-Semiconductor (CMOS) device requires advanced solution-based metal layer fabrications in back-end packaging. Such thermal decomposition fabrication method is particularly suitable to be integrated into the packaging process.
In order to show the validity of the process in a real device and the “hot” technology sector, we demonstrate the incorporation of a high-quality, nm thick ZnS nanoparticle layer (prepared by thermal decomposition) within a Cu(In,Ga)Se2 (CIGS) Photovoltaic (PV) device. We demonstrate that this not only alleviates these issues, but greatly improves efficiency.
Cu(In,Ga)Se2 (CIGS) is known to provide the highest efficiency material among thin-film solar cells [7]. CIGS surface typically has roughness of 10–100 nm scale, which presents challenges for deposition of the buffer layer. ALD and chemical bath deposition (CBD) both provide conformal ultra-thin film growth with consistent thickness on nano-patterned substrates, and are particularly suitable for the CIGS surface. Hence, both processes have been utilized to deposit the buffer layer for CIGS solar cells [8]. CBD additionally takes advantage over ALD by its non-vacuum, large-area deposition capability, which makes CBD preferable for the industry. Hence, CBD has become regarded as the most robust industrial deposition method for CIGS buffer layer for decades [9,10,11]. Nonetheless, CBD suffers from issues such as poor crystallinity, high concentration of impurities, and requirements for post process, waste liquid treatment. These issues raise the cost of CIGS solar cells and jeopardize the environment. In our CIGS module fabrication line, a 1 m2 CIGS module, the deposition of buffer layer using CBD produces around 10 L toxic chemical waste containing hydrogen sulfide acid, zinc chloride, ammonia [NH3] and thiourea [CH4N2S], while the same film prepared by thermal decomposition only produces less than 10 mL of non-toxic volatile chemicals.
We show that by using a thermally decomposed ZnS nanoparticle layer as replacement for the conventional CBD buffer layer, efficiency of a CIGS solar cell can be boosted by 32%, and issues associated with the CBD process and raising the cost of CIGS solar cells are eliminated. The new ZnS NPs layer allows reduction of an intrinsic ZnO layer, which can lead to severe shunt leakage in case of CBD buffer layer. This leads to a 65% relative efficiency increase.

Precursor solution has been prepared, with precursor molecule zinc diethyldithiocarbamate {[(C2H5)2NCS2]2Zn} dispersed in trioctylphosphine (TOP), using 97% zinc diethyldithiocarbamate (329703 ALDRICH), and 97% trioctylphosphine (718165 ALDRICH) purchased from Sigma Aldrich. Before dispensing the precursor solution, Cu(In,Ga)Se2 (CIGS) thin film was pre-heated to 250 °C and stabilized under Ar atmosphere in a non-vacuum chamber. Subsequently, 200 μL of the precursor solution has been dropped onto CIGS surface. The reaction forming homogeneous ZnS nanoparticles (ZnS NPs) thin film takes 5 min. The TOP solvent has been evaporated as the ZnS nanoparticles thin film was ready. Subsequently, acetone was used to wash away residual TOP on the ZnS NPs/CIGS junction sample and accomplish the ZnS NPs layer on CIGS.

Fabrication of the CIGS solar cells started with an 800 nm-thick Mo back-contact prepared by DC-magnetron sputtering on rigid soda lime glass (SLG) with a 2 cm square area. The CIGS absorber layer with thickness of 2 μm was deposited onto Mo-coated SLG substrate by a three-stage co-evaporation process at about 550 °C. Subsequently, a ZnS(O,OH) buffer layer was deposited onto CIGS surface by a 30-min chemical bath deposition (CBD) at 75 °C using a ZnSO4/ammonia/thiourea aqueous solution. Optimization of device performance results in the ZnS(O,OH) buffer layer with thickness of 20 nm, forming the CBD ZnS/CIGS junction material. For CIGS solar cells with the ZnS NPs device, the buffer was prepared through the method illustrated in the “Synthesis of ZnS nanoparticles layer” section above. A 50 nm-thick intrinsic ZnO (i-ZnO) and a 250 nm-thick Al-doped Al:ZnO (AZO) stacking layers were subsequently deposited onto the junction materials using RF sputtering. For CIGS solar cells with the CBD-deposited ZnS(O,OH) buffer layer, AZO thin films were deposited under room temperature, while for those with the ZnS NPs buffer layer, AZO thin films were deposited under 150 °C.

Current–voltage (J–V) measurements were performed following the procedure described in the international standard CEI IEC 60904-1. All solar cells were characterized by J–V measurements under a simulated Air Mass 1.5 Global (AM 1.5G) illumination with a power of 1000 W/m2. The temperature was actively controlled during the measurements and was kept at 25 ± 1 °C. The efficiency and other electrical parameters of CIGS solar cells were obtained by a system consisting of a 1000 W Class A solar simulator (Newport 91192A, Irvine, CA, USA) equipped with a Xenon lamp (Newport 6271A, Irvine, CA, USA), an AM 1.5G filter (Newport 81088A, Irvine, CA, USA) and a current–voltage source (Keithley 2400, Cleveland, OH, USA). The spectrum of the solar simulator was measured with a calibrated spectroradiometer (Soma S-2440). The photon conversion efficiency (PCE) of the devices was measured using a 300 W Xenon (Newport 66984, Irvine, CA, USA) light source and a monochromator (Newport 74112, Irvine, CA, USA). The system was calibrated before each measurement with a calibrated silicon photodetector. The PCE measurements were carried out using a lock-in amplifier (Standard Research System, SR830, Stanford Research Systems, Sunnyvale, CA, USA), an optical chopper unit (SR540, Stanford Research Systems, Sunnyvale, CA, USA) operated at 260 Hz and a 1 Ω resistor in shunt connection.

A commercial UV-Vis-NIR spectrophotometer (Hitachi U4100, Tokyo, Japan) equipped with standard mirror optics and an integrating sphere was used to measure the absorption of the solar cells.

The software used for simulation was Crosslight APSYS (Burnaby, BC, Canada). APSYS is based on 2D finite element analysis and Poisson equation approach, drift-diffusion model to analyze electrons and holes transportation for structure of photovoltaic devices.

This work is funded by the Department of Industrial Technology, Ministry of Economic Affairs, Taiwan. The authors would like to thank them for their support. 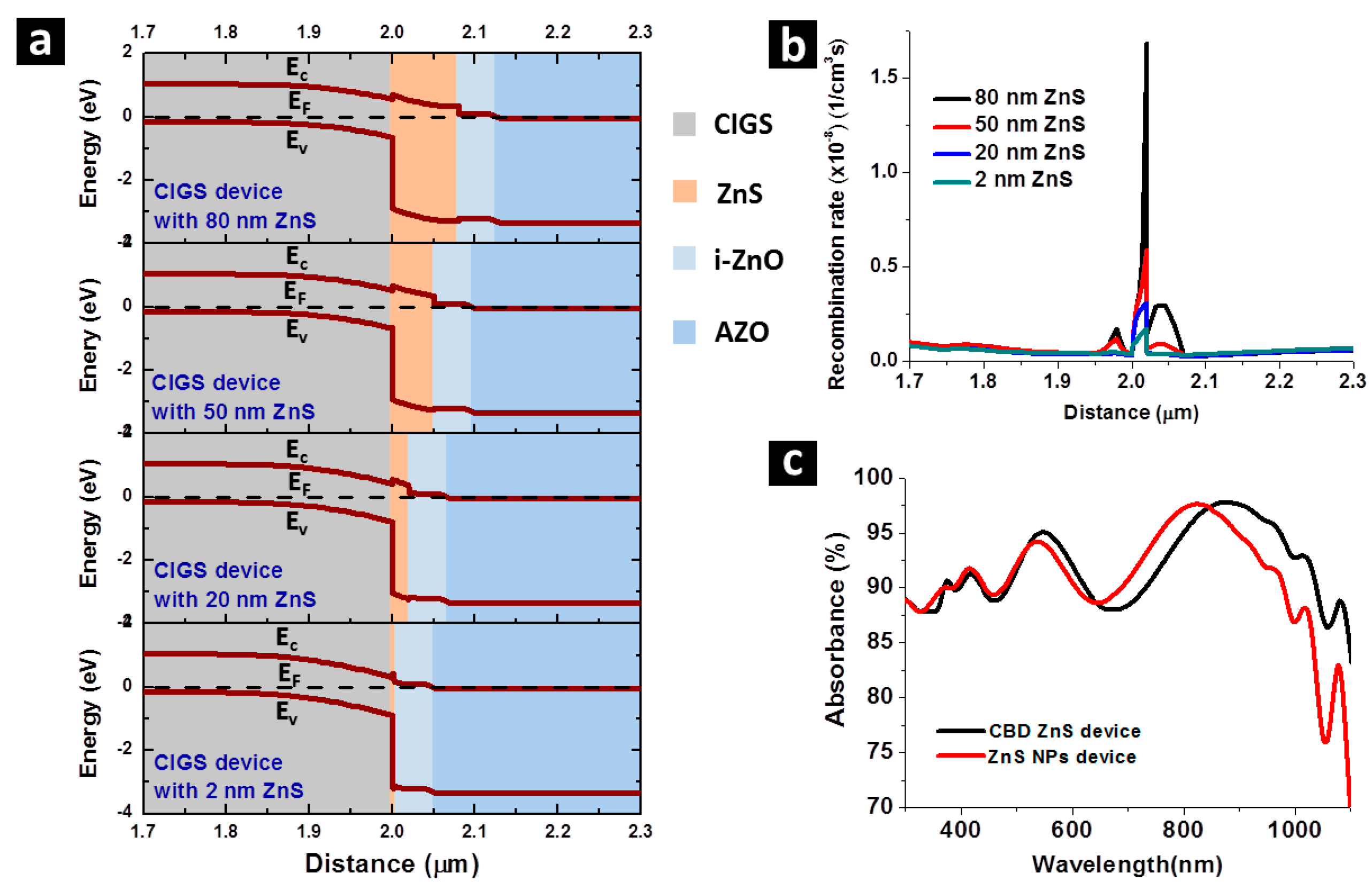