:
Polymers have lower resistance to scratching and wear than metals. Liquid lubricants work well for metals but not for polymers nor for polymer-based composites (PBCs). We review approaches for improvement of tribological properties of polymers based on inclusion of fillers. The fillers can be metallic or ceramic—with obvious consequences for electrical resistivity of the composites. Distinctions between effectiveness of micro- versus nano-particles are analyzed. For example, aluminum nanoparticles as filler are more effective for property improvement than microparticles at the same overall volumetric concentration. Prevention of local agglomeration of filler particles is discussed along with a technique to verify the prevention.
Keywords:
scratching of polymers; polymer wear; polymer + nanofiller composites; polymer tribology 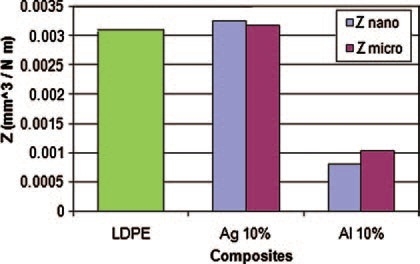 There is an ongoing process of replacement of metal parts by polymer-based composites (PBCs) in automotive, aviation, and aerospace industries (this list of industries is not claimed to be complete). The advantages are well known: less and cheaper maintenance; less noise (examples: Boeing Dreamliner, Aurora D8); and lower overall weight, which in the case of automobiles and planes lowers fuel consumption. Growth of the electronics industry also seems to be accompanied by increased use of polymers or of polymer-based composites. The replacement process is slowed down by:
A comprehensive review of all these issues could be voluminous. In this article, we must necessarily note some important thermophysical and mechanical properties of PBCs, but the emphasis is on what we know and how we can improve tribological properties, namely scratch resistance, wear, and friction, of PBCs. As pointed out by Ernest Rabinowicz of MIT [2], annual losses to industry resulting from insufficient tribological expertise run into many millions of dollars. In many cases, parts and components that serve their purposes in dynamic contact with other parts require periodic replacement due to wear when they are otherwise mechanically sound. Such replacement is often palliative only, when a longer lasting component would prove more efficient and less costly. Moreover, as discussed by Zambelli and Vincent [3], the energy needed to maintain movement of the worn parts is higher than for “fresh” parts.
Here, we review methods of improving tribological properties of polymers—current and potential ones. The common denominator for many of these methods is the use of fillers. Fillers may be comprised of micro- or nano-sized particles. Our PBCs are sometimes called ‘hybrids’ since they defy the traditional classification of materials into inorganic and organic; here we describe materials that have organic polymers as matrices and inorganic (metal or ceramic) fillers.

2. Spatial Distribution of the Filler

Some engineers and scientists consider all matrix + filler composites ‘treacherous’. The reason is potential local agglomeration of the filler particles; the properties at such a location are much worse than those of the neat polymer without filler. Thus, before doing anything else, one needs to verify uniformity—or otherwise—of the spatial distribution of particles in the matrix. A technique for such verification has been developed [4]; it involves two different kinds of equipment. First, a focused ion beam (FIB) is used to ‘cut out’ a parallelepiped in a specimen of the composite. In the case described in reference [4], the milling out of the specified volume was performed with Ga+ ions at a 30 keV acceleration voltage. It was found afterward that gallium ions deposited on the new surface hampered visualization; however, passing a low beam current of 3 nA over the surface restored the visibility. Another complication of the FIB process was heating caused by the Ga+ beam. This problem was eliminated by changing the overlap in the passes done by the beam from 50% to 0%. The FIB use was complemented by scanning electron microscopy (SEM)—a technique well explained by Gedde [5] and also by Michler [6]. SEM was performed before, during, and after ion milling since effects of that process needed to be evaluated, too.
The composites described in [4] consisted of low density polyethylene (LDPE) with aluminum particles—approximately spherical, with the average diameter of 1 µm. One of the scanning electron micrographs obtained is shown in Figure 1. We see no agglomeration of filler particles on the walls of the parallelpiped. Actually, particle size is not an obstacle in verification of agglomeration; smaller particles, alone or in agglomerates, can be visualized since SEM can resolve details such as 10 nm [5,6]. The FIB/SEM technique developed in 2007 has been used since for various composites.
Needless to say, not all filler particles have a natural tendency for uniform distribution in a polymeric matrix. Olsson and his colleagues studied spatial distribution of cobalt ferrite nanoparticles (CoxFe3−xO4, x ≈ 1) in an epoxy. First, they developed a method of synthesis of such particles [7,8] with a diameter of ≈ 50 nm. Then they applied three kinds of coatings: 3-glycidoxypropyl- (GPTMS), aminopropyl-(APTMS), or methyl-silsesquioxane (MTMS). Three types of behavior were observed [9]. MTMS-coated ferrite particles with a coating thickness of 3 nm agglomerated in the composite without sedimentation. APTMS-coated particles agglomerated and underwent sedimentation. 50 nm thick GPTMS coatings provided the desired effect: no agglomeration or sedimentation.

While carbon is classified as an inorganic material, it appears in several forms with a very wide range of properties, hence it seems to deserve a separate section. As discussed by Svahn and coworkers [14], a micron-thick carbon coating can decrease wear by orders of magnitude and maintain a low friction in a non-lubricated contact.
Carbon nanotubes (CNTs) and graphene have been investigated as fillers for enhancing the mechanical, electrical, and tribological properties of polymers. These carbon nanomaterials are lightweight and can be functionalized to improve dispersion and adhesion to the polymer matrix. In particular, functionalized reduced graphene oxide (FRGO) can be easily and inexpensively mass-produced. Graphene itself, a two-dimensional material, applicable in very thin layers, can be used as a self-lubricating solid or else as an additive to lubricating oils [30]. The large surface to volume ratio of these reduced-dimensionality materials means that there is significant interaction between filler and polymer matrix even at low filler concentration, allowing a wide range of mechanical, electrical, and tribological properties to be tailored by varying filler concentration. Polymer composites containing CNTs [31] and graphene [32] fillers have outstanding mechanical and electrical properties. The inclusion of metal nanoparticles in CNTs and graphene results in composites with outstanding electromagnetic absorption and shielding characteristics [33,34].
The volumetric wear and brittleness of hybrids of the thermoplastic elastomer poly(butyl terephthalate)/oxytetramethylene with single wall CNTs (SWCNTs) and multi wall CNTS (MWCTS) show minima as a function of filler concentration [35] while the Young modulus and strain at break show the maxima. The plasticity of the hybrids increases as evidenced by an increase in elongation at break. The plasticization is more significant for hybrids containing SWCNTs than MWCNTs due to SWCNTs having fewer contact points with the matrix per unit surface area and greater flexibility.
The mechanical and tribological properties of hybrids of diglycidylether of bisphenol-A epoxy with octadecylamine-functionalized reduced graphene oxide (FRGO) show a maximum in the Young’s modulus at 0.5 wt % of FRGO [36], as shown in Figure 9. Also, the tensile strength and strain at break show a maximum and minimum, respectively, at 0.5 wt % FRGO. The glass transition temperature Tg which represents the glass transition region [1] has a maximum at 0.5 wt % FRGO as well. For all these properties, the behavior above 0.5% FRGO might be due to filler agglomeration (almost a leitmotiv of this review…).
In the same system, the friction as a function of sliding distance, as measured using a pin-on-disc tribometer, displays a regime in which the friction is on the order of five times less than that of the neat epoxy, as shown in Figure 10. This is attributed to a thin transfer film of the hybrid onto the tribometer pin. After a sliding distance of about 50–100 m, the friction returns to a value comparable to that of the neat epoxy, due to removal of the transfer film by residue in the wear track. While the dramatic difference is not seen anymore, all friction values for the hybrids are still lower than for the neat epoxy.

As noted in Section 1 citing Rabinowicz [2], increasing tribological expertise is related not only to scientists and engineers trying to excel in the development of new materials, but also to industry economics. Tribology of metals is ‘older’, well advanced, and in many cases liquid lubricants are doing at least a satisfactory job. However, we need to remember the warning by Blau [37]: “…the fundamental origins of sliding resistance are not as clear. In fact, some of the greatest scientists and philosophers have contemplated friction without managing to produce a universal, predictive theory. This striking lack of success is due to the many potential factors that can influence friction in a wide spectrum of physical situations”.
With softer and mechanically weaker polymers, and with the liquid lubricants not well applicable, filler particles provide interesting and useful options. In our review, we tried to provide a balanced view of this area, stressing also difficulties involved in preventing filler particle agglomeration. Again, on the positive side of the ledger, we need to note that filler concentrations providing visible improvement of tribological properties are often low. Figure 8 showing the minimum of wear at 1.0 wt % of inexpensive nanoclay seems pertinent from this point of view. 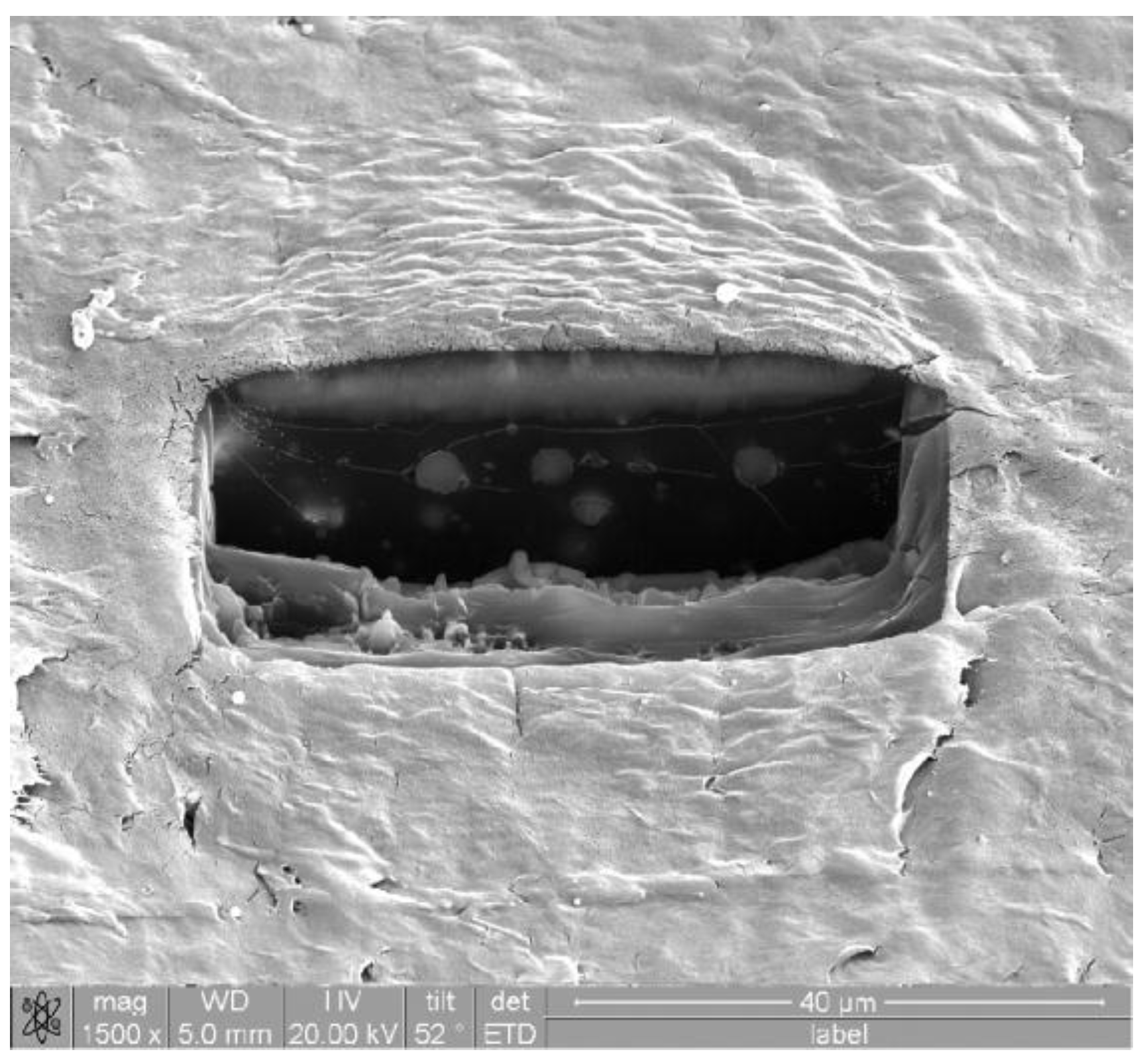 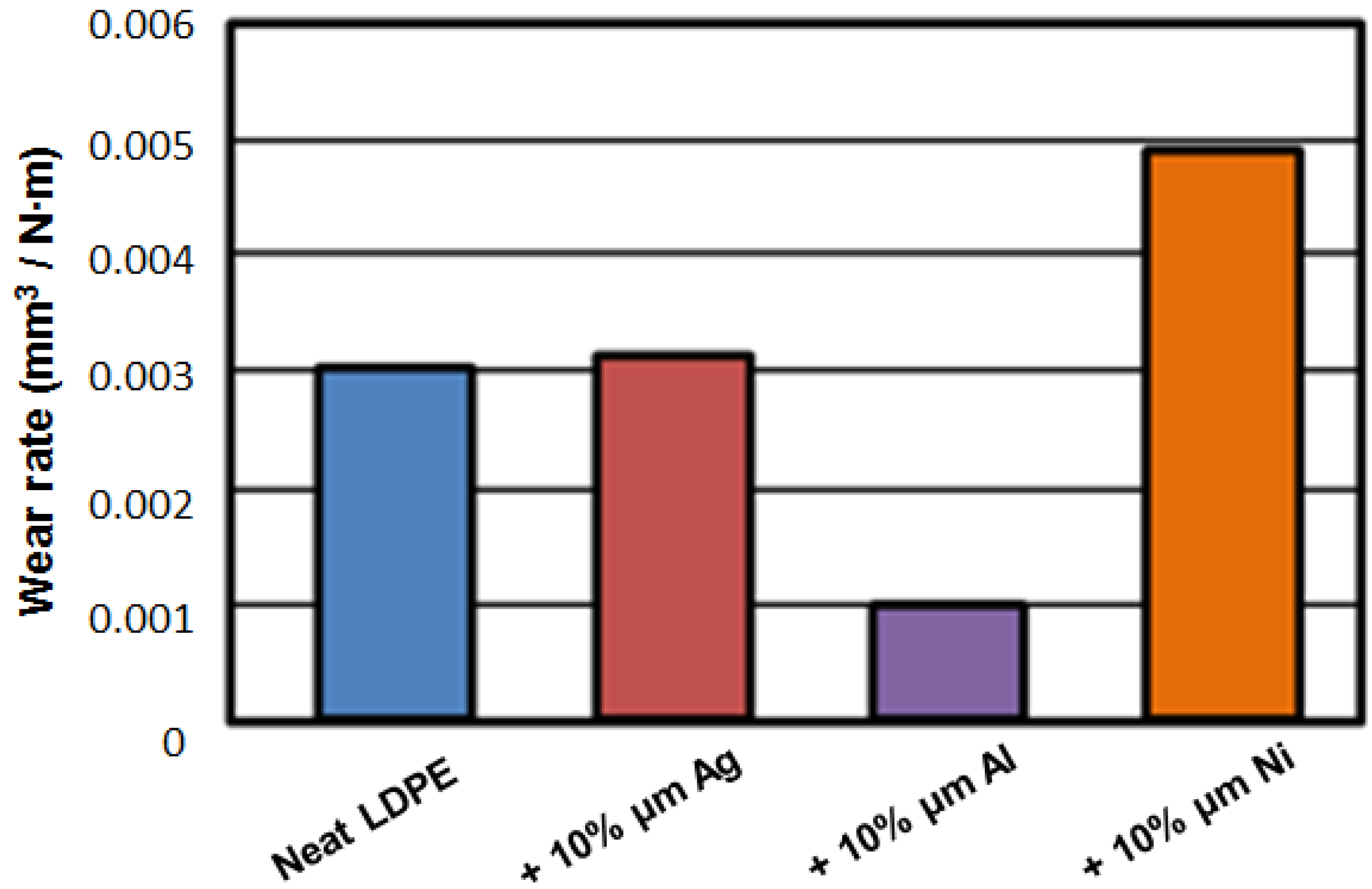 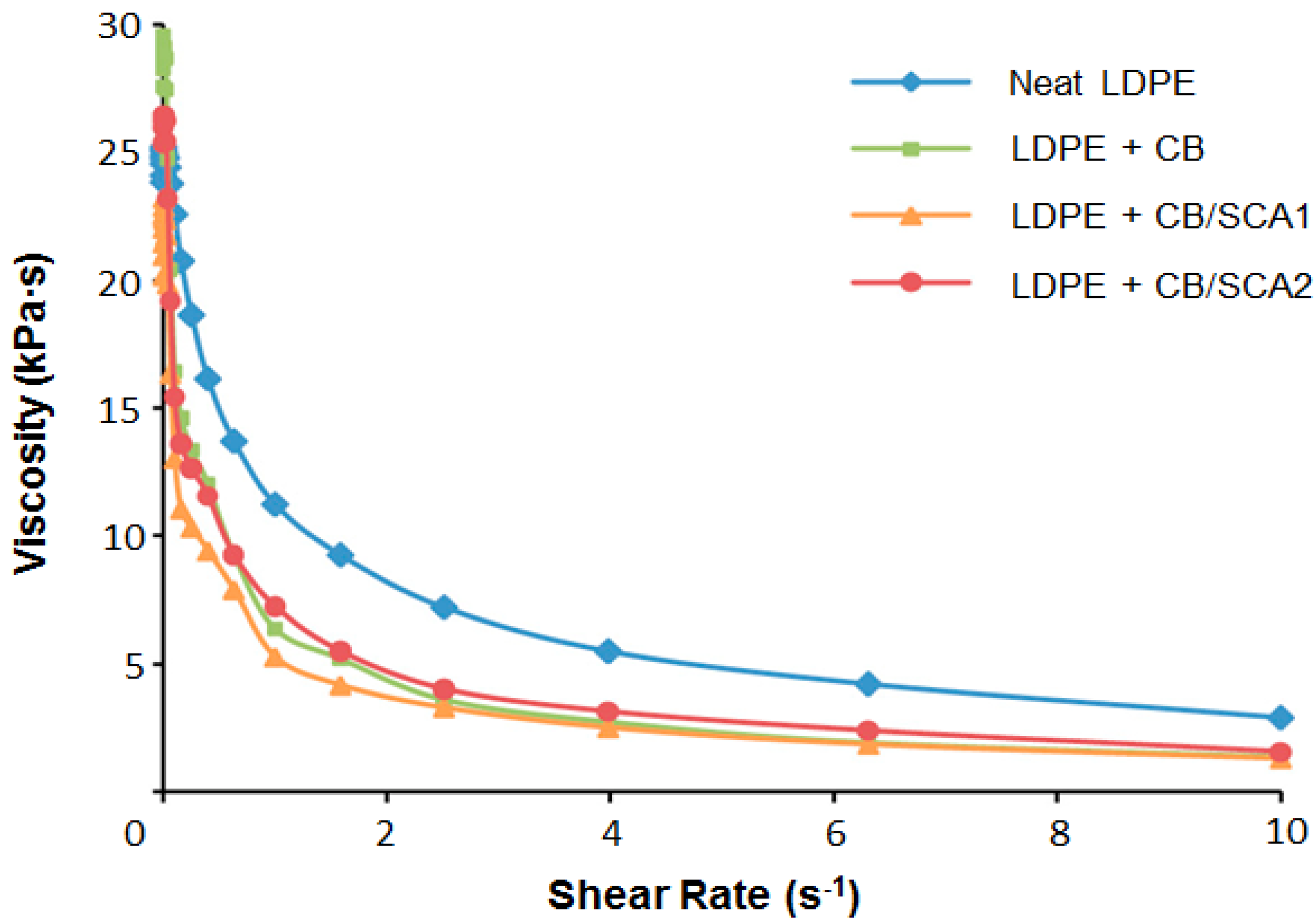 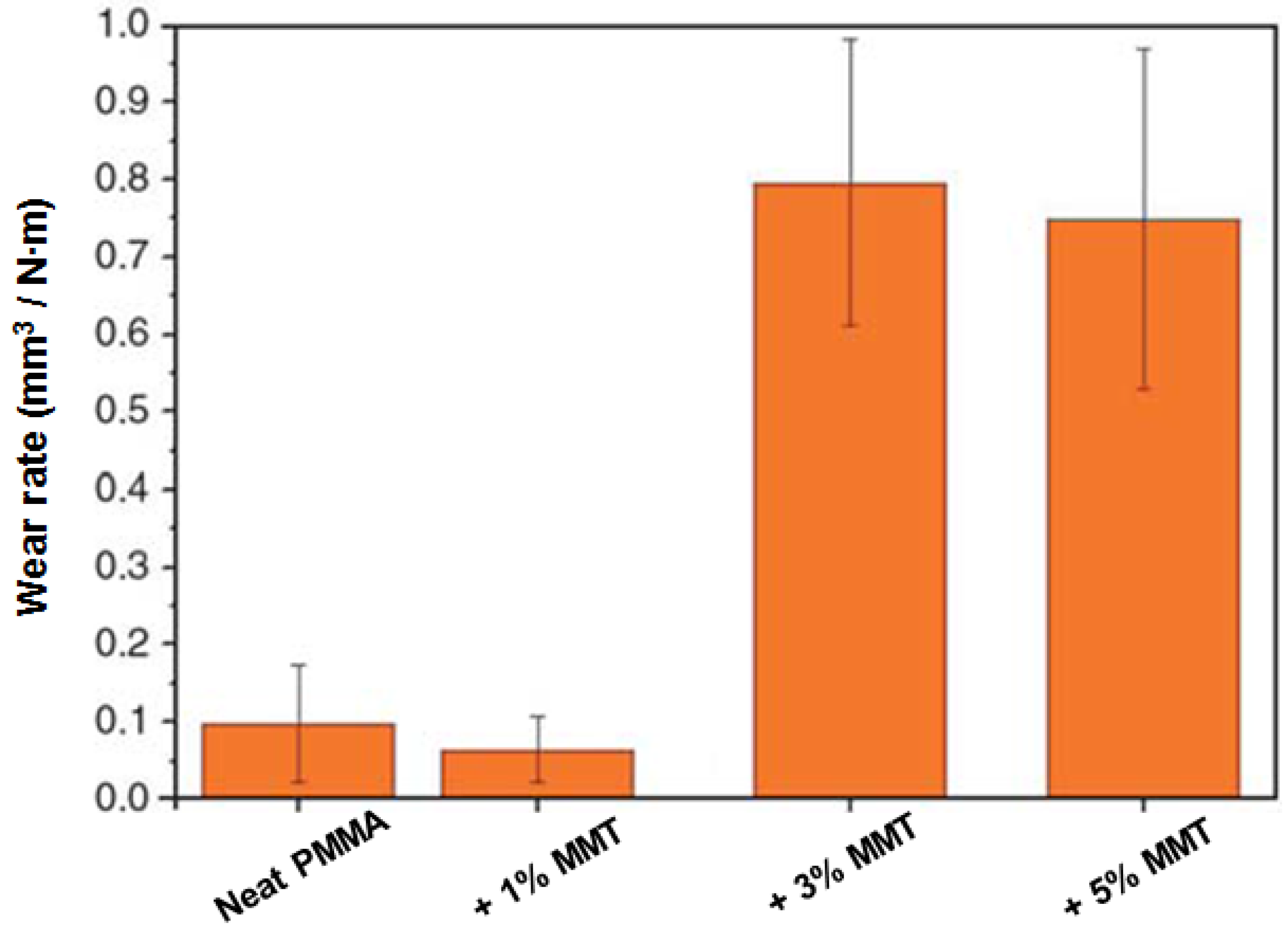 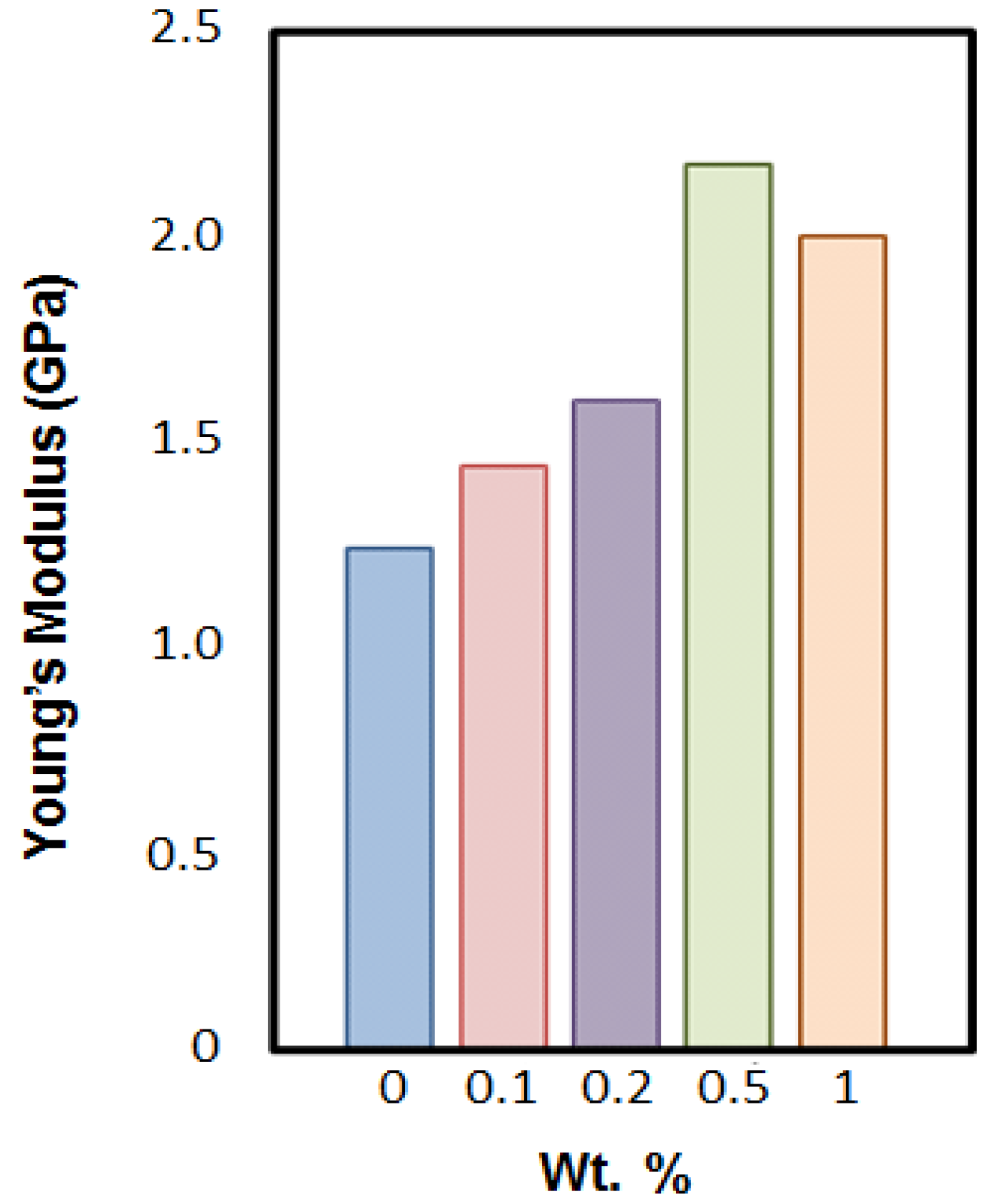