:
This paper presents the results of studies of the local surface properties of pure and highly Nb-doped (12 wt %) TiO2 nanotubes (TNT) using the X-ray photoelectron spectroscopy (XPS) and scanning electron microscopy (SEM) methods, respectively. XPS analysis showed that the pure TNT exhibit an evident over-stoichiometry combined with high level of undesired C contaminations, which was confirmed by the relative concentration of specific elements O, Ti and C (with respect to all the surface atoms) equal to 0.46, 018 and 0.36, respectively. In turn, for the highly Nb-doped (12 wt %) TNT, a slightly different surface chemistry was observed because the relative concentration of specific elements O and Ti and, with respect to all the surface atoms, is slightly lower, that is, 0.42 and 0.12, respectively; this is directly related to the fact that Nb atoms appeared having the relative concentration at the level of 0.09, whereas the undesired C contaminations reached the same level (0.36), as is the case of pure TNT. In addition, SEM analysis confirms that there are evident free spaces between the specific slops containing several TNT, what was additionally confirmed by the contribution of specific surface bonding coming from the SiO2/Si substrate. The obtained information allowed us a new insight on the potential origin of aging effect at the surface of TNT in atmosphere being the undesired limitation for their potential application as the chemical resistive type sensors or in any other fields of their application related to their surface activity.
Keywords:
TiO2 nanotubes; Nb-doping; surface chemistry; XPS; surface morphology; SEM

In the last several years there was an increasing attention of the scientific community to titanium dioxide (TiO2), an n-type wide band-gap stable nontoxic oxide semiconductor material, exhibiting extraordinary physical, chemical, electronic, electrochemical and photoactive properties. This was among the reasons that TiO2 has been found to be a very important electronic material for potential application in photovoltaics [1,2,3], photocatalysis [4,5], and chemical/gas sensing [6,7,8,9,10].
It is well known that TiO2 based gas sensors are particularly attractive for the detection of reducing gases, and that larger surface to volume ratio provides better gas sensing performances [11]. This is why special attention was given to the different forms of nanostructures having large specific surface area. In particular, hierarchical nanostructured TiO2 seems to be among the best candidates for the development of gas sensors because its conductance/resistance changes with the surface adsorption and desorption of gas molecules in a reversible way. This is related to the electronic transfer that occurs between the chemical species and the semiconductor upon the molecules adsorption over the surface [12].
Because the conductance change strongly depend on the nanostructures shape and size, nanostructured titania with tubular shape seems to be one of the most promising materials for the fabrication of novel type gas sensing devices [13].
Lately it was also recognized that anatase phase of TiO2 is more reactive than the rutile phase [14]. Thus, in order to enhance TiO2 sensor properties the phase transformation from anatase to rutile should be avoided, stabilizing the anatase phase even at higher temperatures and hindering its transition to rutile observed already at ~600 °C.
It is also well known that addition of pentavalent atoms like Nb or Ta to titania evidently diminishes the anatase to rutile transformation and also hinders the grain growth [15]. This is extremely important because the addition of different metals as dopants to the metal oxides lattice cause the enhancement of their gas sensing performances (sensitivity, selectivity, response time, etc.) [16].
The most popular methods for the synthesis of one-dimensional TiO2 nanostructures are the sol-gel template [17] and the hydrothermal method [18]. Apart from them, to obtain TiO2 nanotubular arrays for the development of TiO2 nanotubes gas sensors, extremely sensitive towards hydrogen [19] the anodization method was lately develop by our group. Moreover, we have also found that the sensing performances of TiO2 nanotubes, in terms of baseline conductivity, response and stability [20,21,22], can be improve by adding of niobium (Nb).
However, a fact that has been well known for over that 20 years should be taken into account, namely, that the transduction of chemical information into the electrical signal change of metal oxides responsible for sensing performances of TiO2 nanotubes takes place within the surface space charge layer within the Debye length (about several nm) [23].
Thus, it is absolutely crucial to try to propose a new insight into the surface properties of pure and Nb-doped TNT, with a special emphasis on their surface chemistry (nonstoichiometry), including the undesired C surface contaminations, which mainly cause the sensor aging effect after their exposure to atmosphere, something that was until now rather completely ignored in the available literature. This type of information can be obtained by a surface sensitive method, such as X-ray photoelectron spectroscopy (XPS), exhibiting the information depth comparable with the above mentioned Debye length.
According to the above the aim of this research was to obtain the fundamental information on the local surface properties of pure titanium oxide TiO2 nanotubes and highly Nb-doped (12 wt %) TiO2 nanotubes (TNT), including surface chemistry (stoichiometry/nonstoichiometry, as well as surface contaminations including C species) by using the XPS method, in relation to their surface morphology and additionally verified by Scanning Electron Microscopy (SEM) method.

Pure (TNT) and highly Nb-doped (12 wt %) TiO2 nanotubes (Nb-TNT) have been obtained at the Department of Information Engineering, Brescia University, Italy, using a two-step process.
Within the first step Ti and Ti–Nb films were deposited on Si substrates covered by SiO2 by means of RF (13.56 MHz) magnetron sputtering using the targets of Ti and Ti with the holes filled by Nb insets. Within the second step the room-temperature anodization process of Ti and Ti–Nb films was performed using a two-electrode system working at constant voltage mode (potentiostatic mode) using an electrolyte a mixture of 0.3–1 wt % NH4F and 0.5–2 mol/L H2O in glycerol. We have obtained pure nanotubes in 0.5 wt % NH4F and 0.5 mol/L H2O containing glycerol. The anodization voltage and time were 120 V and 45 min. Nb-TNT were obtained in 1 wt % NH4F and 0.5 mol/L H2O containing glycerol. The anodization voltage and time for the preparation of Nb-TNT were 120 V and 35 min.
After anodization the samples were washed in distilled water and dried at room temperature. In order to transfer the deposited amorphous phase to the anatase phase the samples were annealed at 400 °C for 5 h in air. Other experimental details on the preparation of Ti and Ti/Nb films and their anodization one can find in [20,21,22].
The surface chemistry, including contaminations, of the prepared pure and Nb-doped TiO2 nanotubes was controlled by XPS method. These experiments were performed at Institute of Electronics, Silesian University of Technology, Gliwice, Poland, using a commercial XPS spectrometer (SPECS, Berlin, Germany) equipped, among others, with the X-ray lamp (XR-50) and a concentric hemispherical analyzer (PHOIBOS-100). The basic working pressure was at the level ~10−9 hPa. All the reported binding energies (BE) data have been calibrated to Au4f peak at 84.0 eV. Other experimental details have been described elsewhere [23,41,43].
In turn, the morphological characterization of the above mentioned TiO2 NT was carried out at the Department of Information Engineering, Brescia University, Italy, by the SEM method using a LEO 1525 microscope (LEO Electron Microscopy Inc., One Zeiss Drive, Thornwood, NY, USA) equipped with field emission gun.

The surface chemistry of pure and 12 wt % Nb-doped TNTs deposited on Si substrates covered by SiO2 were studied by means of the XPS method. The obtained results were in a good correlation with the samples’ morphological characteristics.
For the pure TNTs the relative concentration of specific elements O, Ti and C, with respect to all the surface atoms, was equal to 0.46, 018 and 0.36, respectively. For the highly Nb-doped (12 % wt) TNT a slightly different surface chemistry was observed since the relative concentrations of specific elements O and Ti, and with respect to all the surface atoms, were slightly lower, 0.42 and 0.12. This is related to the fact that Nb atoms appeared at the surface having the relative concentration with respect to all the surface atoms at the level of 0.09.
An evident free space was observed between the specific slops containing several TNT by means of SEM analysis, which was additionally confirmed by the contribution from the SiO2/Si substrate containing in the respective XPS O1s and XPS Si2p lines as well.
The obtained results allowed us a new insight on the potential origin of aging effect for TiO2 nanotubes in atmosphere being the undesired limitation for their potential application as the chemical sensors.

This work was supported by the Ministry of Science and Higher Education funding for statutory activities of the Institute of Electronics, Silesian University of Technology, Gliwice, Poland and the European EuNetAir Project, COST Action TD1105 and partially financed by research grant of National Science Centre, Poland—OPUS 11, no 2016/21/B/ST7/02244. The work has also been supported by the projects “New approaches and methodologies for bioremediation of water contaminated by chlorinated aliphatic solvents (SUSBIOREM)” (funded by the National Research Council (CNR) and Lombardia Region) and “MSP: Multi Sensor Platform for Smart Building Management” (grant agreement No 611887, funded by the European Commission through its 7th Framework Programme). 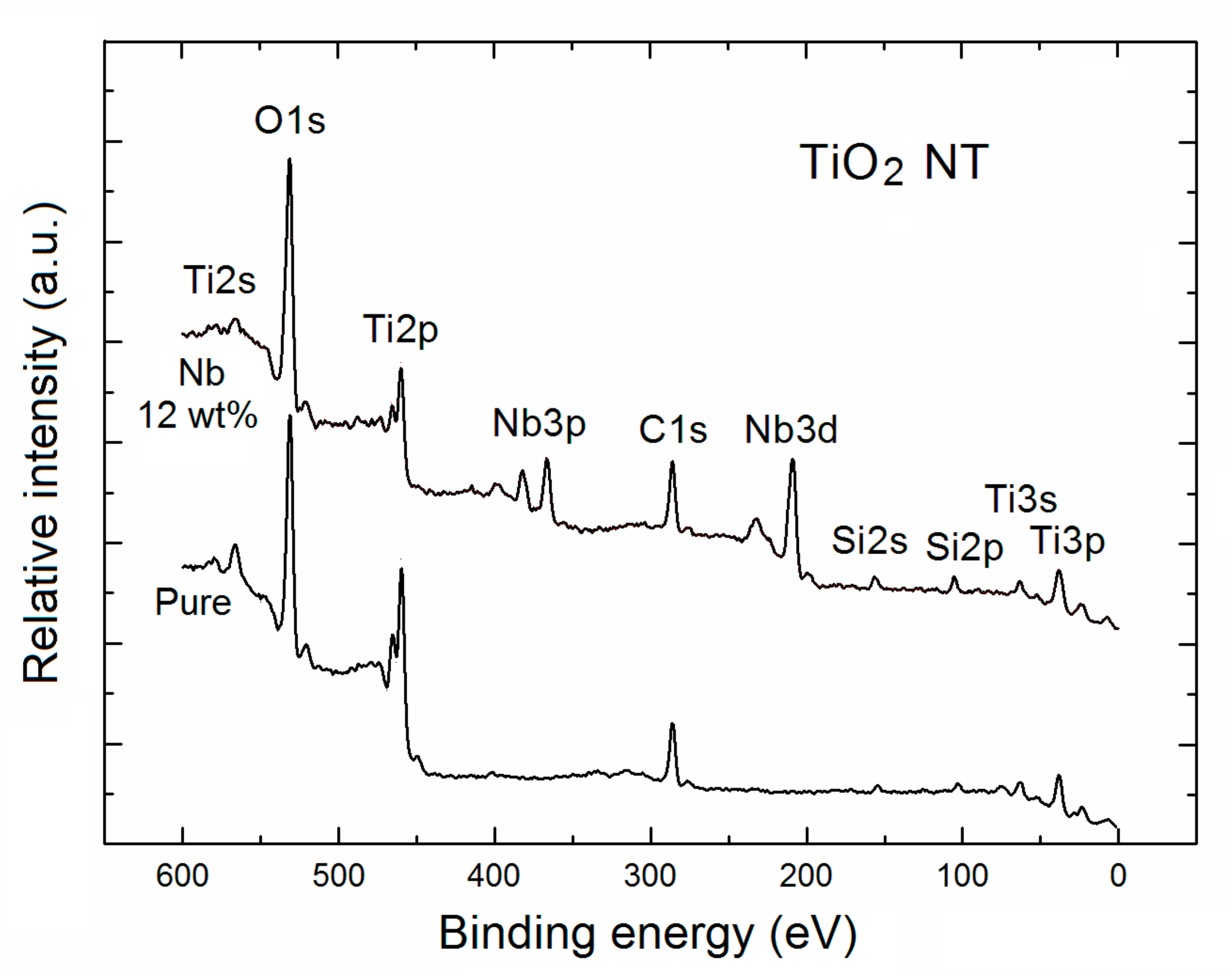 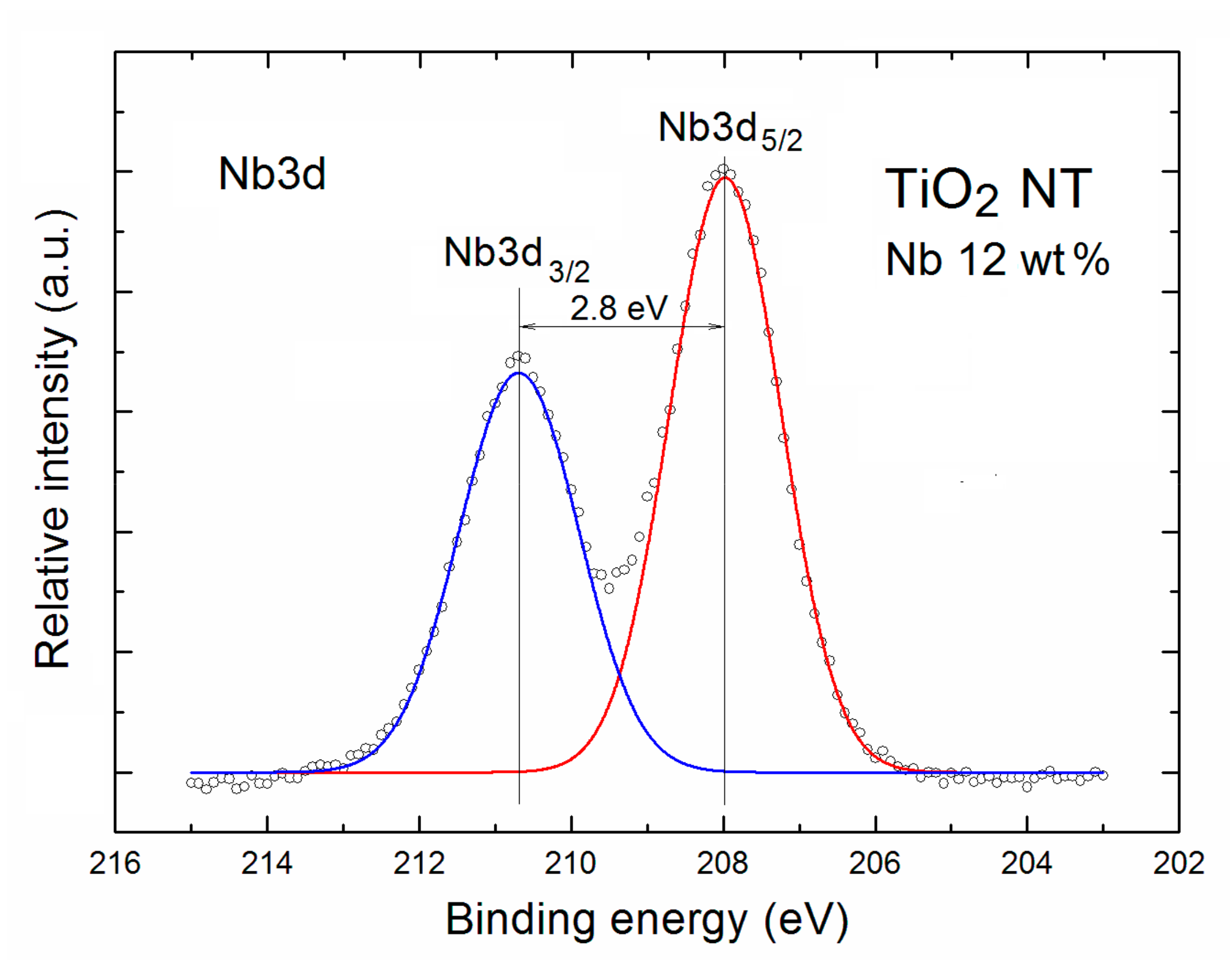 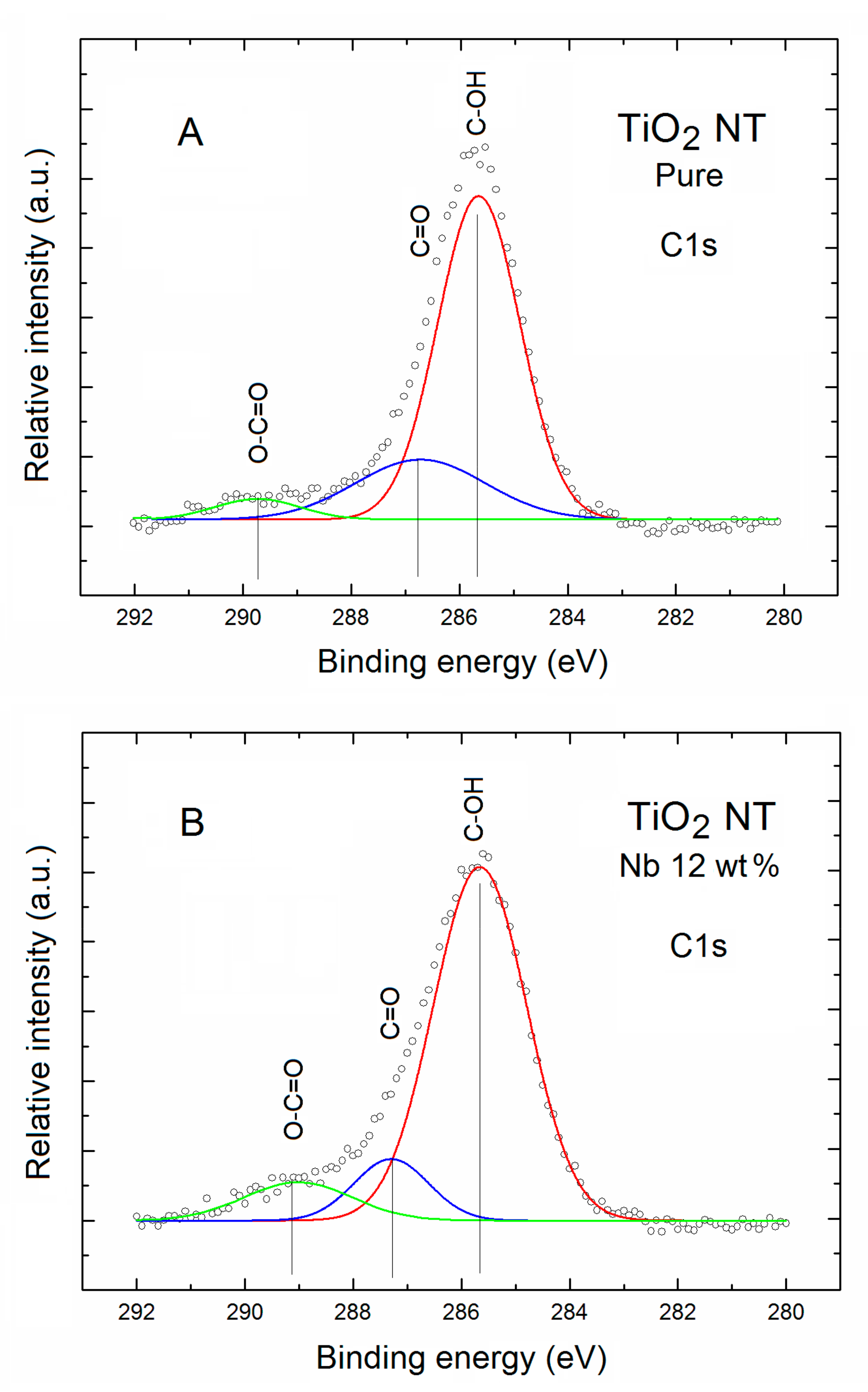