Silver Nanoparticles in the Lung: Toxic Effects and Focal Accumulation of Silver in Remote Organs
Next Article in Special Issue

The variety of structures of nanometric zinc oxide can be classified among new materials with potential applications in various branches of industry: rubber, pharmaceutical, cosmetics, textile, electronic and electrotechnology, photocatalysis, and pro-ecological systems [1,2,3]. Various techniques for the preparation of zinc oxide (ZnO) nanopowders, such as sol-gel processing, co-precipitation, vapor deposition, precipitation in water solutions, hydrothermal synthesis, precipitation from microemulsions and mechanochemical processes, mechanical milling, organometallic synthesis, and the microwave method [4,5,6,7,8,9,10,11], have been applied have enabled products with ZnO particles differing in shape, size, and spatial structure. Among the different methods, the sol–gel approach appears to be one of the most promising methods to prepare ZnO nanoparticles due to several advantages: the ease of synthesis, low temperature of decomposition, control over the chemical composition, low cost, reliability, repeatability, and relatively mild synthesis conditions. In recent years, studies have focused on sol–gel formulations that afford not only good barrier properties but also inhibitive characteristics [12,13,14]. Silica-coated ZnO nanomaterials are of particular interest because they have good environmental stability with different materials [15] and surfaces are easy to modify [16,17]. Moreover, silane coupling agents have been selected to modify ZnO nanoparticles because they can inhibit nanoparticle growth and enhance the long-term stability in organic matrices [18]. Some research has shown that the types and amounts of silane coupling agents influence the properties of nanomaterials, such as the morphology, processability, and optical, mechanical, and barrier properties [19,20]. Surface modification of ZnO nanoparticles is a practical means of changing chemical and physical properties and improving dispersion in organic media. For example, triethoxysilane treatments on thin sol–gel grown films of ZnO were reported by C.G. Aleen et al. [21]. It was demonstrated that, by using different R-triethoxysilane precursors (R = octadecyl-, decyl-, phenyl-), it is possible to achieve a broad range of surface functionalizations through variation of the R end group. D. Álvarez et al. [22] proposed the functionalization of zinc oxide nanoparticles using (3-glycidyloxypropyl)trimethoxysilane (GPTMS) to assess the effect of surface modification. The obtained results confirmed that the addition of ZnO nanoparticles to the sol–gel film improves the protection properties of the system. M. Jiang et al. [23] demonstrated that the incorporation of silane agents improves the performance of epoxy coatings on alloy substrates. It was demonstrated that the amine and thiol organofunctional groups are covalently attached to the silica layer. H. Chen et al. [24] prepared hydrophobic ZnO nanoparticles using aminopropyltriethoxysilane (APTES) as a silane coupling agent. It was demonstrated that APTES was linked to the surface of ZnO nanoparticles through chemical bond bindings. Y. N. Li et al. [25] modified commercial zinc oxide nanoparticles using APTES and GPTMS as silane coupling agents. The obtained results suggest that the modifier of silane can change the surface hydrophilicity and effectively break the agglomerations of nanoparticles. Grasset et al. [26] coated commercial ZnO nanoparticles with APTES under varying environments and demonstrated that the ZnO silane coating can be used to obtain a homogeneous dispersion of photostable nanoparticles. G. A. Farzi et al. [27] modified zinc oxide nanoparticles with different mole ratios of trimetoxyvinyl silane and oleic acid, used as coupling agents, to modify their surface properties. It was shown that the combination of these two coupling agents allows for the control of the hydrophobicity and dispersibility of the ZnO nanoparticles in the solvents with varying polarity.
The present study focuses on the preparation of modified zinc oxide (ZnO) materials by the sol–gel process using different silane precursors such as (3-glycidyloxypropyl)trimethoxysilane (GPTMS), phenyltriethoxysilane (PhTES), octyltriethoxysilane (OTES), and octadecyltriethoxysilane (ODTES) as modifying agents. Properties of the modified ZnO materials, such as size distribution, morphology, and structure were characterized through dynamic light scattering (DLS), environmental scanning electron microscopy (ESEM), transmission electron microscopy (TEM), Fourier transform infrared (FTIR) spectroscopy, thermogravimetric (TGA) analysis, and X-ray diffraction (XRD). Since the wettability of solid surfaces is an interesting topic in materials science, due especially to a large area of potential applications (e.g., anti-corrosion and anti-icing), we also investigated the water-repellence behavior of films deposited onto a metallic substrate (aluminum). We carried out the roughness and water contact angle (CA) measurements and correlated the obtained results with the structural and morphological properties.

The modified ZnO materials were prepared through a sol–gel process. Briefly, in order to prepare the inorganic sol, 1.2 mL of zirconium IV propoxide solution (ZPO) was added dropwise in 1.2 mL of ethyl-acetoacetate, mixed together, and magnetically stirred for 20 min and ultrasonically stirred for another 20 min at 40 °C. Then, 0.25 mL of HNO3 solution (pH = 0.5) was added to the solution and ultrasonically stirred for 100 min. Meanwhile, the organic sol was prepared by mixing 2.5 mL of 2-propanol and silane precursor (1.1 × 10−2 moles GPTMS, PhTES, OTES, or ODTES) with 0.325 mL of HNO3 solution (pH = 0.5) and magnetically stirred for 60 min at 40 °C. Finally, both sols were mixed together for another 60 min, keeping the same temperature. To obtain modified ZnO nanoparticles, 1 mL of ZnO nanoparticles dispersed in 2-propanol (a concentration of 0.5% (w/w)) was mixed with 1 mL of final sols and ultrasonically stirred for 10 min. The resulted solutions were left at rest for 24 h and then characterized both as dispersions and as films deposited onto the metallic substrate (aluminum) (see Figure 1).
The metallic substrate, to ensure uniform wetting, was cleaned with soap, distilled water, and finally with ethanol. The sol–gel films were obtained by dipping the metallic substrate in final solutions. All final samples deposited onto metallic substrate were dried and kept (overnight) at room temperature (25 °C).

Particle size distribution was determinate by dynamic light scattering (DLS) (ZetasizerNanoZS instrument Malvern Instruments Ltd., Malvern, UK). The determinations for samples (0.1 mL samples diluted in 25 mL of 2-propanol and ultrasonicated for 5 min) were performed at 25 °C. Morphology and shape of the resulting modified silica ZnO particles (0.1 mL samples diluted in 25 mL of ethanol and ultrasonicated for 5 min) were studied via environmental scanning electron microscopy (ESEM) using an FEI-Quanta 200 microscope and via transmission electron microscopy (TEM) with a Tecnai™ G2 F20 TWIN Cryo-TEM instrument (FEI Company, Eindhoven, The Netherlands) at 200 kV acceleration voltages. ESEM images were obtained in a low vacuum mode, without any covering of the samples. In the case of TEM analysis, the samples were observed directly without further staining for improving contrast. A droplet of diluted sample was poured on a carbon film-coated copper grid and left to air-dry at room temperature. Thermal analysis of the modified ZnO materials (dried under vacuum at 50 °C for 24 h) was performed using a Thermogravimetric Analyser TGA Q5000IR (TA Instruments, New Castle, DE, USA) in a nitrogen atmosphere (10 °C/min) at 40–700 °C. The internal structure’s modifications of the dried modified ZnO materials deposited on a metallic substrate was subjected to Fourier transform infrared spectroscopy using a Spectrometer Tensor 37 (Bruker Instrument, Woodstock, NY, USA), in ATR mode with a Golden Gate diamond unite (400–4000 cm−1), resolution of 4 cm−1. X-ray diffraction (XRD) analyses were achieved by the use of a SmartLab diffractometer (RigakuEurope SE, Ettlingen, Germany). The operating conditions were as follows: 45 kV, 200 mA, Cu Kα radiation (1.54059 Å), and a parallel beam configuration (2θ/θ scan mode), from 5 to 90° 2θ. The static contact angle (CA) of deionized water on deposited films was measured through the Drop Shape Analysis System, model DSA1 (FM40 Easy Drop, DIP-ROBOT DR-3, Riegler and Kirstein, Berlin, Germany), at room temperature in air. The sample was placed on a plane stage using a stainless steel needle with an outer diameter of 0.5 mm. All CA measurements were carried out in a static regime at room temperature with a drop volume of 3 µL. Contact angles were obtained by fitting the drop shape with a mathematical expression. Then, the slope of the tangent to the drop at the liquid–solid–vapor (LSV) interface was calculated. The reported contact angle values were obtained as the average of five measurements (liquid droplets placed in various regions of the film surface). The spectroscopic ellipsometry (SE) measurements were carried out at room temperature on a variable angle spectroscopic ellipsometer (VASE, J.A. Woollam. Co., Lincoln, NE, USA) in a spectral range of 400–1000 nm at a 70° angle of incidence. For the ellipsometric data simulation, the Cauchy model was applied in the transparent region, and surface roughness was obtained.

Modified ZnO materials were prepared through the sol–gel process using different silica precursors—(3-glycidyloxypropyl)trimethoxysilane (GPTMS), phenyltriethoxysilane (PhTES), octyltriethoxysilane (OTES), and octadecyltriethoxysilane (ODTES)—and were characterized via DLS, ESEM, TEM, TGA, FTIR, and roughness and water contact angle analysis. DLS characterization revealed a dependence of the particle’s size on the type of substituting organic groups from silica precursors. The ZnO particles were dispersed into the silica matrix, confirmed by ESEM and TEM. The thermal stability of the dried ZnO materials indicated that silica nanoparticles began to lose hydrophobicity when they were heated in the 300–500 °C range. FTIR spectra revealed that the organofunctional groups were attached to the silica surface. The modified ZnO materials had an amorphous character, as shown by XRD analysis. Contact angle (CA) measurements showed that the ZnO silica surface can be changed from a hydrophilic nature to a hydrophobic nature using a silane precursor with a long alkyl chain. Coating with modified ZnO material containing ODTES presents a higher degree of nanometer-scale roughness (CA = 142 ± 5°). These obtained ZnO materials can be used for anti-icing and corrosion protection of metallic structures. 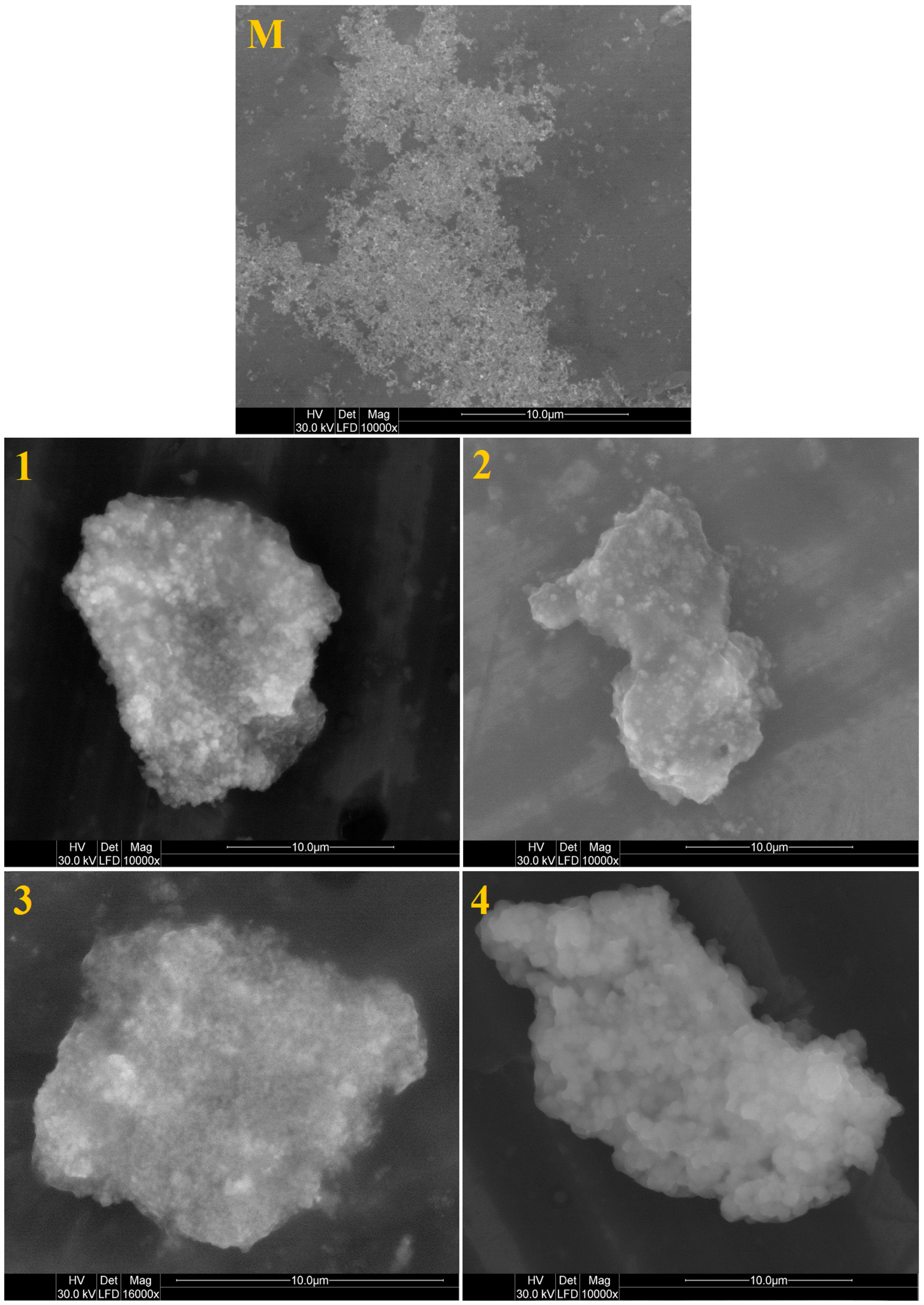 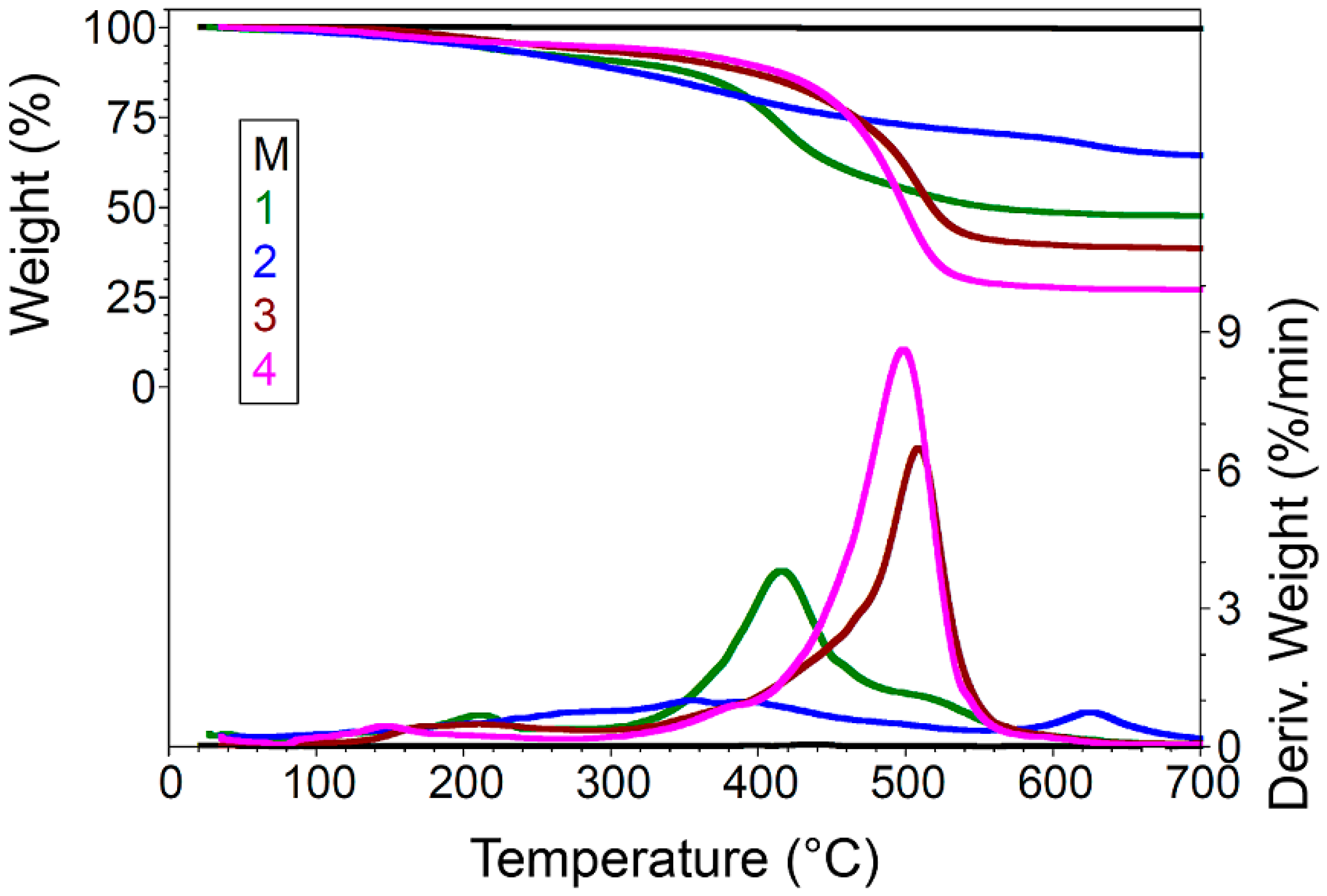 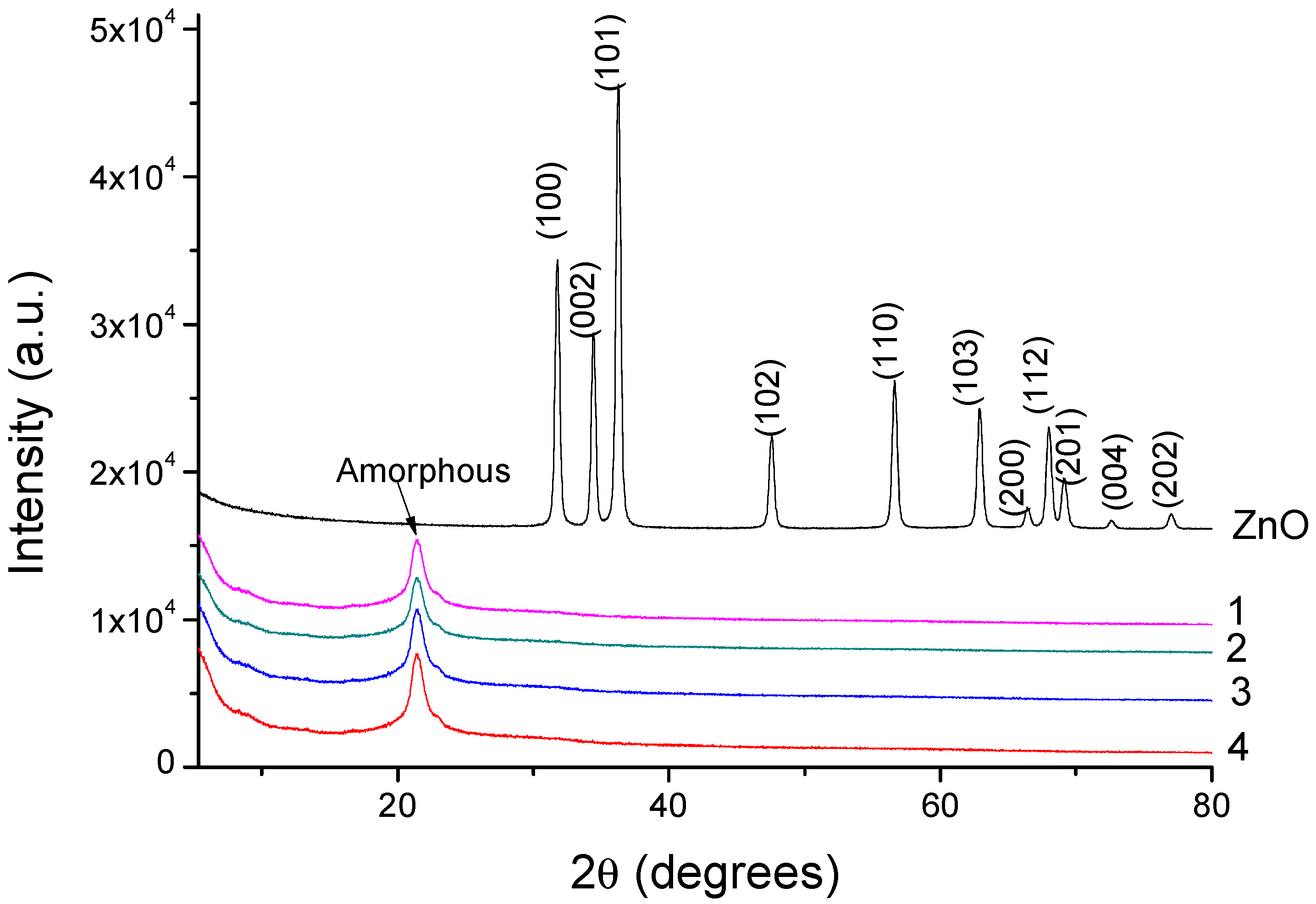