Placing nanowires at the predetermined locations on a substrate represents one of the significant hurdles to be tackled for realization of heterogeneous nanowire systems. Here, we demonstrate spatially-controlled assembly of a single nanowire at the photolithographically recessed region at the electrode gap with high integration yield (~90%). Two popular routes, such as protruding electrode tips and recessed wells, for spatially-controlled nanowire alignment, are compared to investigate long-range dielectrophoretic nanowire attraction and short-range nanowire-nanowire electrostatic interaction for determining the final alignment of attracted nanowires. Furthermore, the post-assembly process has been developed and tested to make a robust electrical contact to the assembled nanowires, which removes any misaligned ones and connects the nanowires to the underlying electrodes of circuit.
Keywords: nanowire; deterministic assembly; dielectrophoresis; nanodevices nanowire; deterministic assembly; dielectrophoresis; nanodevices

Despite the abundance of functional nanowires and the demonstration of the elemental devices based on them, effective device fabrication remains unresolved. The fabrication challenges, including precise registration of nanowires and effective metallization for robust electrical connections to the substrate or circuit, are significant fundamental issues for bottom-up synthesized nanomaterials from a manufacturing perspective. Heterogeneous integration of functional nanowires with a complementary metal oxide semiconductor (CMOS) circuitry allows the possibility for multifunctional chip manufacture in which bottom-up synthesis and top-down fabrication technology merge. In most applications, assembly of a single nanowire at a predefined position and orientation with submicron registration accuracy is desirable, and especially preferable is a process that facilitates post-metallization of both ends of the nanowires.
Some techniques, such as Langmuir-Blodgett film [1], fluidic directed-alignment [2], blown bubble film [3], chemically-functionalized patterns [4], and the contact printing method [5,6,7], have been proposed to integrate the nanowire on the substrate in a controlled fashion while keeping pace with the advances in nanowire synthesis and characterization. Their abilities, however, are limited to the production of the ordered nanowire arrays with some degree of orientation. Contact printing on the e-beam patterned photoresist trench and subsequent liftoff delivers a possible method to organize a single nanowire array on the substrate [8], yet accurate alignment of a single nanowire to the desired location still appears practically impossible.
Alternating current (AC) dielectrophoresis (DEP) utilizes the translational motion of polarizable neutral objects in the liquid medium under the inhomogeneous electric field [9]. Since most of the metallic and semiconducting nanomaterials are more polarizable relative to non-aqueous media, they are attracted to the electrode gap where the high electric field is induced across the gap. As a result, DEP manipulation has been used to fabricate nanodevices by bridging the nanowires and nanotubes across the electrode gap [10,11,12]. Recently, AC DEP alignment made remarkable progress in accomplishing the precise alignment of a single metal nanowire [13,14,15], a semiconducting nanowire [16], nanotube device array [17], and even biologically-different nanowires on a single chip by their sequential DEP assembly [18]. A capacitively-coupled electrode structure [13,14,17,19] has been widespread to fabricate a large number of devices in parallel where biasing the underlying electrode causes the discrete surface electrodes to acquire a similar potential. In such schemes, strong DEP force between the surface electrode tips solely attracts the nanomaterials and is also responsible for their final alignment. In our recent experiment of the dielectric-covered parallel electrode structure [15,18], it was observed that the nanowires assembled at the electrode gap are mobile along the gap and determine their final position relative to the adjacent nanowire, hinting that the nanowire electrostatic (ES) interaction can assist the DEP force to improve the yield for deterministic nanowire placement. Here, we present a generic and versatile deterministic bottom-up integration of nanowires, using a novel aspect of DEP nanowire attraction and nanowire-nanowire ES interaction, where a large number of a single nanowire alignment with excellent registration accuracy is readily attained. The post-assembly process to fabricate the individual nanoscale device array and its perspective associated with the nanowire assembly are also discussed.

The narrow metal electrode tip structure (Ti/Au = 20 nm/50 nm), fabricated on a silicon substrate, consists of ~1 μm thermally-grown oxide. Electrode tips, 5 μm long and 1 μm wide, are intended to form a 4 μm electrode gap from which a higher electric field region is induced. In order to prevent shorting the electric field between the biased electrodes, a dielectric layer of polymethylglutarimide (PMGI) with a thickness of 300 nm covers the entire substrate. The fluidic cell was used to confine the nanowire solution in an isopropanol to demonstrate this spatially-controlled alignment. An alternative to producing the spatially-controlled dielectrophoretic force on a substrate is to form a recessed photoresist well at the gap between the biased electrodes. This process applies a dielectric layer of PMGI (0.9 μm thick) on the substrate by interdigitated metal electrode fabrication. Following the lithographical patterning of a 7 μm long and 2 μm wide rectangle well array at the electrode gap using an imaging photoresist of BPRS-100, the subsequent ultraviolet ozone exposure of PMGI layer forms a ~0.4 μm deep well. The BPRS-100 photoresist layer is washed from the substrate using an acetone and isopropanol spray.
Rhodium (Rh) nanowires used in this study were synthesized by Rh in the pores of commercial anodized aluminum oxide (AAO) membranes (Anodisc25, Whatman Scientific Inc., Pittsburgh, PA, USA). The nanowires are released by selectively etching the membrane in 3.0 M NaOH with a sonication for 30 min. The synthesized nanowires had nominal diameters of 200 nm and lengths of ~7 μm, which were determined by the pore diameter of the template and the electrodeposition time, respectively. Then, the nanowires are stored in the isopropanol prior to the assembly.
After the nanowire suspension is introduced into the fluidic cell, a sinusoidal bias with Vpp = 10 V, peak-to-peak voltage at the fixed frequency (ω = 100 kHz) is applied between the electrodes, which creates an inhomogeneous electric field in the electrode gap. The electric field strength and the dielectrophoretic force distribution was predicted using COMSOL Multiphysics® software.
For the characterization and inspection of nanowire assembly, the optical microscope (BX-61, Olympus Co., Tokyo, Japan) using the bright and dark-field modes and a field-emission scanning electron microscope (FESEM) (S-4800, Hitachi Co., Tokyo, Japan) were used. The electrical measurement of the Rh devices was carried out using the semiconductor parameter analyzer (4156C, Agilent Co., Santa Clara, CA, USA).

In conclusion, the method described in this paper offers a promising approach to position the single nanoscale building block at the predefined locations, made possible by the combination of the dielectrophoretic force from the photoresist wells and the electrostatic force from the polarized nanowires. It was demonstrated that the post-assembly process via the electrodeposition and dielectric layer removal can effectively transfer the assembled nanowires, only trapped in the photoresist wells, to the metal electrode, producing a large array of mechanically- and electrically-robust nanodevices. This result can be considered a significant advancement toward the commercial viability of bottom-up nanodevice fabrication. In addition, we believe that this post-assembly process can readily combine functional nanowire devices, such as the chemical and biological sensors at the predetermined locations to the underlying logic circuit, highlighting the seamless integration of bottom-up functional nanowire assembly and the top-down fabricated CMOS circuit. A reasonably small device variation considering the distribution of the nanowire diameter further proves the potential and versatility of this approach for integrating a large number of identical devices, allowing us to study the signal-to-noise improvement by signal averaging theory. This approach can be also extended to other noble nanophotonic applications such as the plasmonics of metallic nanopattern and the nanoresonator devices. Furthermore, this assembly technique is not limited to the metal nanowire and can be applicable to the polymeric and the inorganic nanowires, even to the biological entities, which will eventually allow us to explore the arbitrary heterogeneous integration of nanomaterials on a rigid or flexible substrate.

This work was supported in part by the Industrial Strategic Technology Development Program within the Ministry of Trade, Industry and Energy (MOTIE) through the Korea Evaluation Institute of Industry Technology, Korea, under grant no. 10063093 and the newly-appointed professor research fund of Hanbat National University in 2016.

J.K. conceived the idea, carried out the experiment. U.H.C and J.K analyzed the data and performed the simulation for the assembly of nanowires. U.H.C and J.K. wrote the paper. 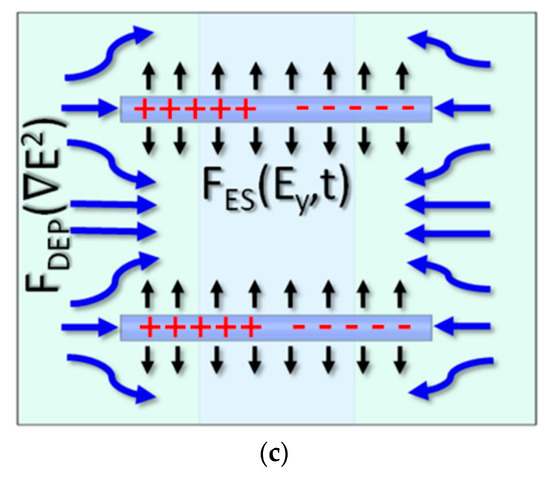 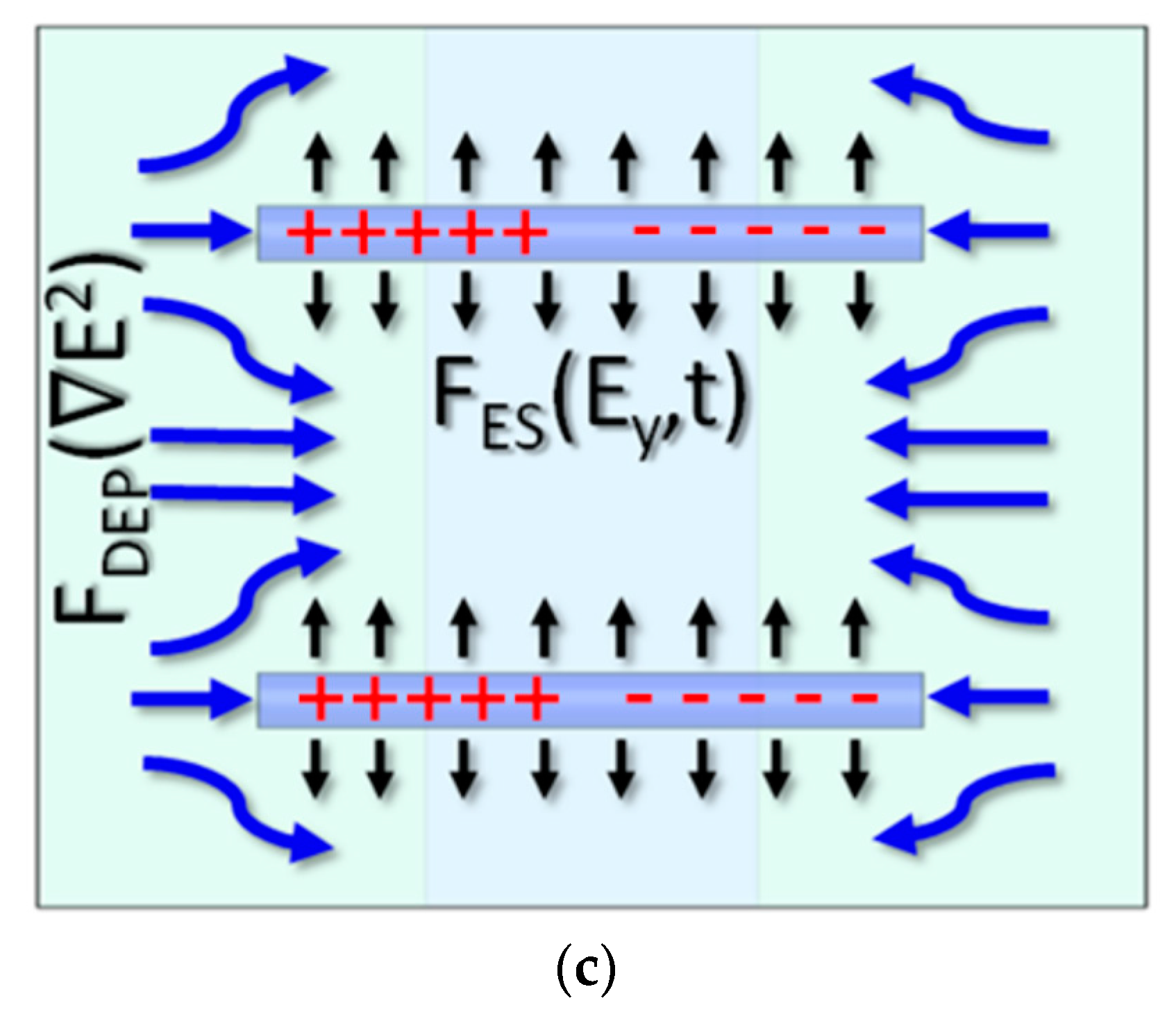 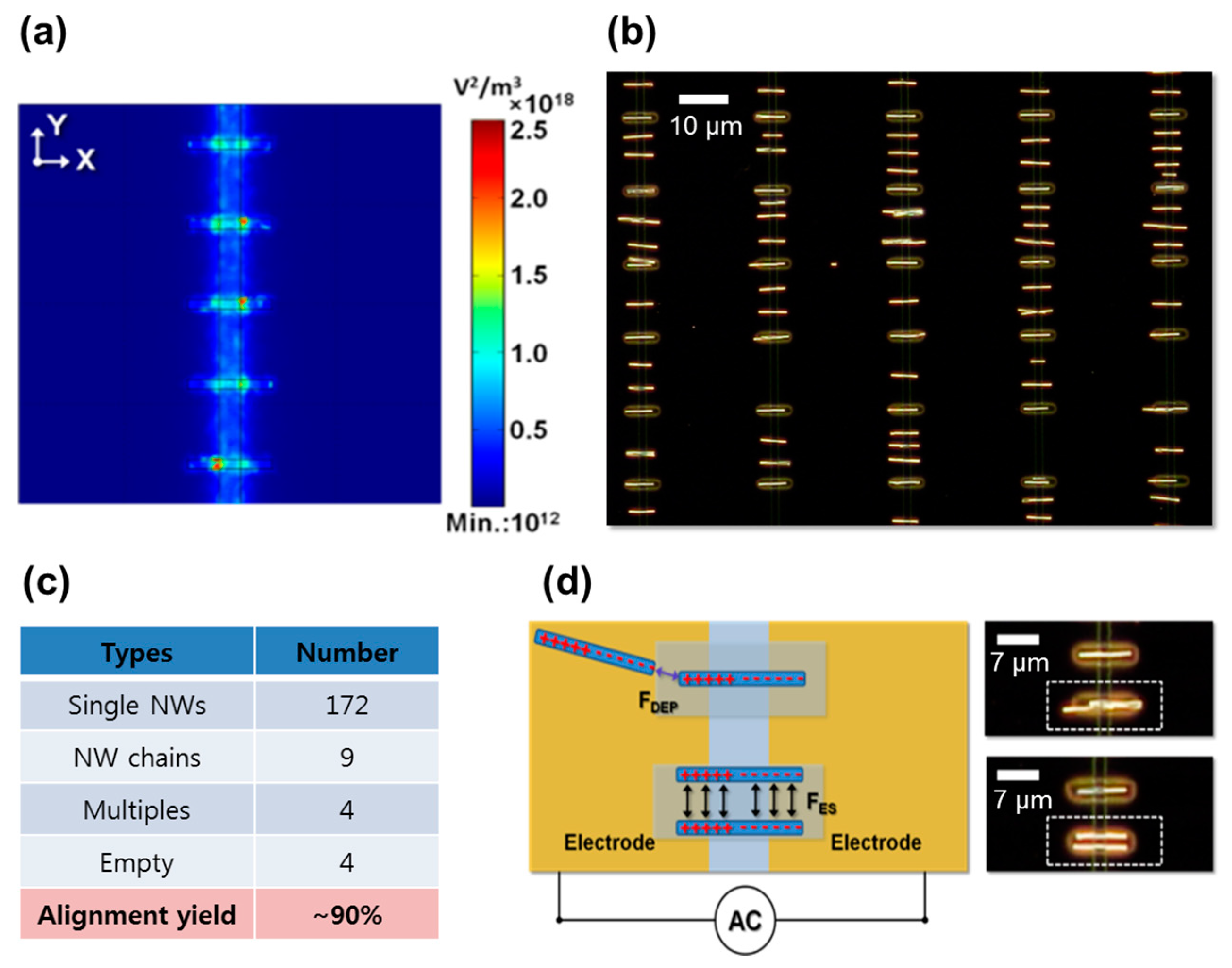 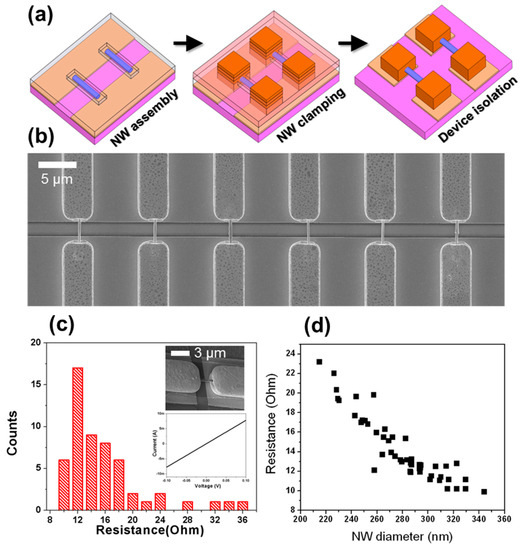 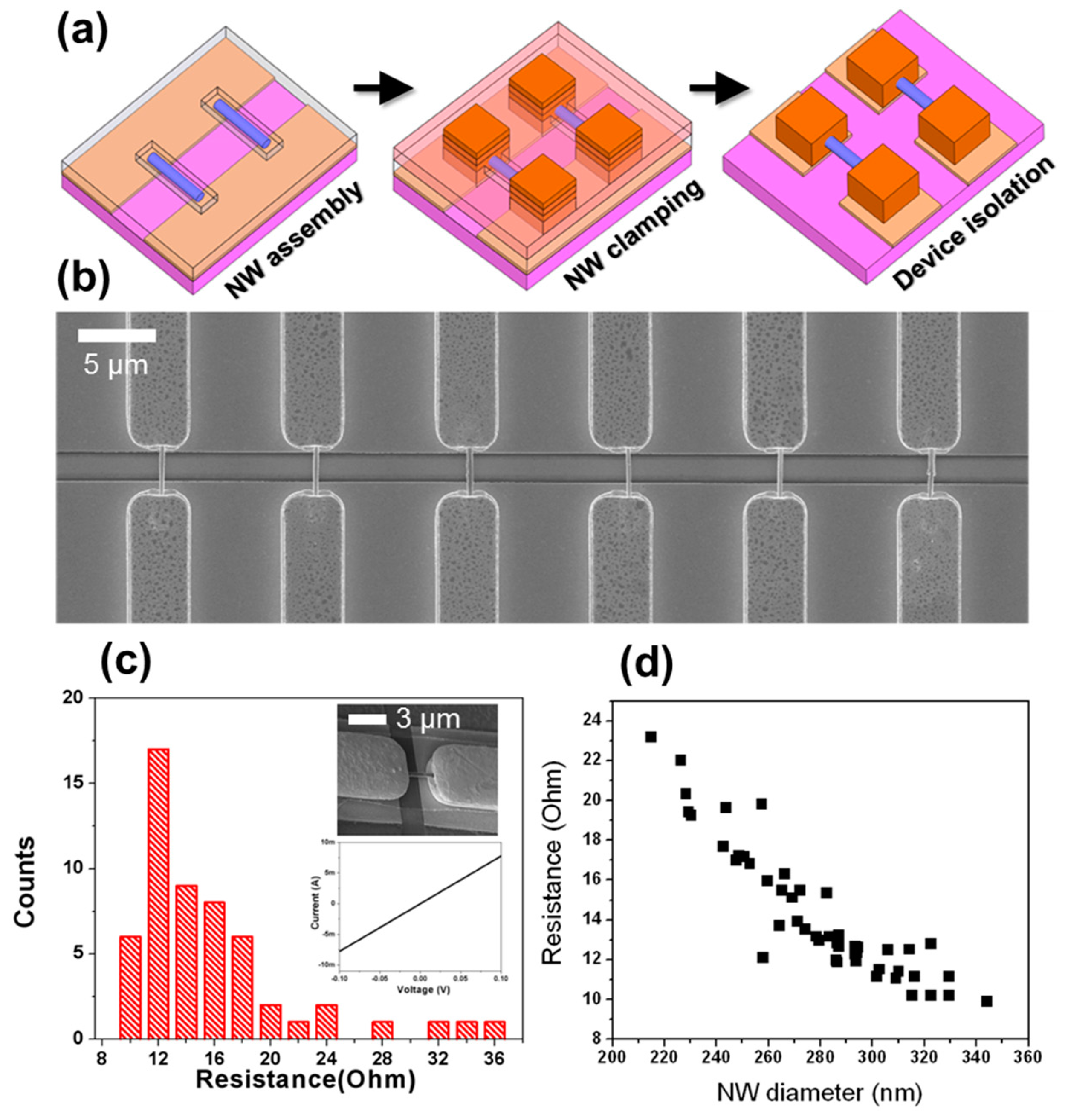