Green chemistry focuses on the production of desired products without generation of hazardous intermediate byproducts in chemical reaction processes. Integrating green chemistry principles into nanotechnology has led to the identification of environmentally friendly reagents that are multifunctional, in that they can serve as a reducing agent as well as a capping agent [1,2]. Synthesis of nanoparticles (NPs) can be performed using a number of routinely used chemical and physical methods [3,4,5,6,7]. Plants and their related materials for production of nanomaterials are not only ecofriendly alternatives, but they are also cost effective. Synthesis of copper oxide (CuO) nanoparticles has been performed using extracts of soybeans [8], gum karaya [9], bark extract [10], leaf extract [11,12], fruit [13,14], tea and coffee powder [15], peel extract [16] and flower extract [17].
Development in large-scale production for both metallic and nonmetallic nanoparticles has introduced risk to the environment and human health [18,19]. Improper disposal of nanomaterial waste by labs as well as industry is an alarming threat to the ecosystem as well as aquatic life. With this perspective, researchers are focusing on the green synthesis of nanomaterials [1]. The aim is to protect the environment and human health from toxic impacts of nanomaterials and their derived complex compounds and at the same time safely utilize nanomaterials. Environmental and biological risks for copper nanoparticles have been investigated by many researchers. However, the toxicity of nanosized and bulk CuO metal oxide nanoparticles to bacteria [20], yeast [21], green algae [22], crustaceans Daphnia magna and Thamnocephalus platyurus [23] and isopods [24] are well documented. Researchers have also found toxic and inhibiting growth impacts to terrestrial plants caused by CuO metal oxide nanoparticles [25,26]. The lethal effect of CuO nanoparticles on aquatic organisms has been verified by several studies, which include zebrafish (Danio rerio) [27,28], sea anemones (Exaiptasia pallida) [29], fresh water shredders [30], blue mussels (Mytilus edulis) [31] and goldfish [32]. Cytotoxicity and genotoxicity of CuO nanoparticles have been investigated in humans as well as in animals. Finally, CuO nanoparticles have been determined more toxic to human cells with their ability to damage DNA than bulk micrometer particles [33,34].
In this study, we synthesized nanoparticles by leaf extract of Pterospermum acerifolium, which is an angiosperm belonging to the family Malavacea distributed in Southeast Asia. The common name is “Kanack champa” in Pakistan (Figure 1). The bark and leaves have been used for pharmaceutical purposes [35]. Facile synthesis of CuO nanoparticles was performed without using any extensive chemicals or excess energy. Further CuO NPs were characterized by field emission scanning electron microscopy (FE-SEM), Fourier transform infrared spectroscopy (FTIR), X-ray photoelectron spectroscopy (XPS) and dynamic light scattering (DLS) for zeta potential and hydrodynamic size measurements. The study revealed the toxicological impacts of plant-synthesized CuO nanoparticles on Daphnia magna in comparison with engineered nanoparticles. To the best of our knowledge, this is the first study to evaluate the acute toxicity of plant-synthesized copper nanoparticles to model Daphnia magna. The 48-h acute toxicity tests were performed to calculate the effective concentration (EC50) value for both engineered and plant CuO nanoparticles to D. magna. Moreover, ion release, accumulation of nanoparticles in Daphnia and the relative contribution of nanoparticles and ions to accumulation was investigated for both engineered and plant CuO nanoparticles.

CuO nanoparticles were synthesized by aqueous extract of P. acerifolium. Extract was prepared by the maceration method using 20 g of fine leaf powder with deionized water. Before synthesis of nanoparticles, extract was carefully filtered by making sure no solid particles were in the filter. A stoichiometric amount of copper Cu(NO3)2·3H2O was added in 10 mL of extract and then mixed thoroughly by a magnetic stirrer at 45–50 °C. The deep blue color of the copper salt solution changed to dark green. The mixture was placed in a preheated furnace at 400 °C for 5 min. The black fine product was obtained and stored in an airtight glass container for further use.

Cu ion release from engineered and plant CuO nanoparticles at different concentrations of 1 mg/L, 10 mg/L, 100 mg/L was measured. Concentrations were prepared in Mili-Q water. Samples were taken at intervals of 1 h, 24 h, 48 h, 72 h; then, the supernatants were filtered through a syringe filter with 0.2 μm pore diameter and subjected to copper analysis by inductively coupled plasma optical emission spectrometry (ICP-OES) after digestion in 69% HNO3.

Acute toxicity tests of copper oxide nanoparticles were conducted based on the modified OECD standard procedure [36]. Test materials were engineered CuO NPs with a nominal size of 50 nm purchased from Sigma-Aldrich (Louis, MO, USA) and plant-synthesized NPs. Stock nanoparticle suspensions were prepared (30 min sonication in a water bath sonicator). Several test suspension samples with concentrations ranging from 10 to 0.05 mg/L were prepared and control was also set for biotoxicity assay. For each suspension sample with a specified concentration, 10 D. magna neonates from a cultured tank were placed in a 50 mL glass beaker containing 30 mL test solution. Each concentration was tested with three replicates. The test solution was renewed after 24 h to maintain the same dose of exposure. D. magna were not fed during the testing period. After exposure to both NPs suspensions (%), mortality was observed after 24 and 48 h.

Based on the EC50 toxicity test, two doses were selected and tested for study of accumulation of copper oxide nanoparticles in Daphnia. Test concentrations for plant CuO NPs were 0.1 mg/L and 0.05 mg/L and for engineered CuO NPs these concentrations were 0.05 mg/L and 0.01 mg/L. The 48 h exposure period was selected in the accumulation test and adult Daphnia were used. Similar to the acute toxicity tests, the accumulation experiments were conducted under a 16:8 h light/dark photoperiod (20 ± 1 °C) without feeding during the 48 h exposure period. After the 48 h exposure period, 10 mobile Daphnia were sampled from each exposure medium, and they then were transferred to Milli-Q water for 1–3 min. Subsequently, they were rinsed three times with fresh Milli-Q water. After rinsing, they were dried at 80 °C overnight in a preweighed glass dish before weighing on a microbalance and then digested in 69% HNO3 at 80 °C overnight. The Cu concentrations in the digested samples were subsequently determined by ICP-OES. Samples were analyzed from test media after 24 h exposure times to investigate the relative contribution of released ions and particles in the accumulation process.

This research was partially supported by the U.S. National Science Foundation (NSF Grant No. CBET-1235166). The authors acknowledge the Daniel Lab School of Civil and Environmental Engineering, Marcus Nanotechnology Research Center, at Georgia Institute of Technology (Atlanta, GA, USA), and the Environmental Science Department of Lahore College for Women University in Lahore, Pakistan.

Sadia Saif performed the related experiments and wrote manuscript under supervision of Yongsheng Chen. All authors read and approved the final manuscript. 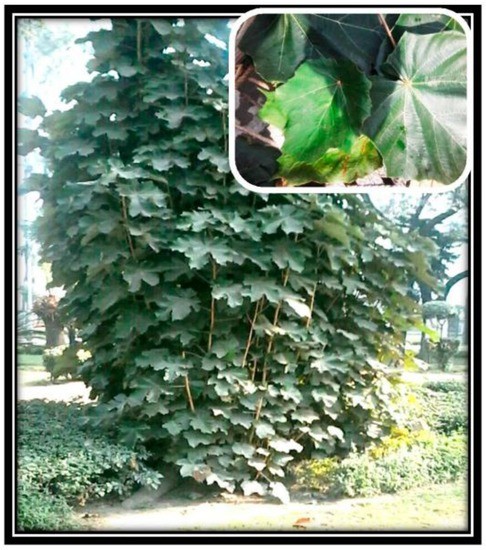 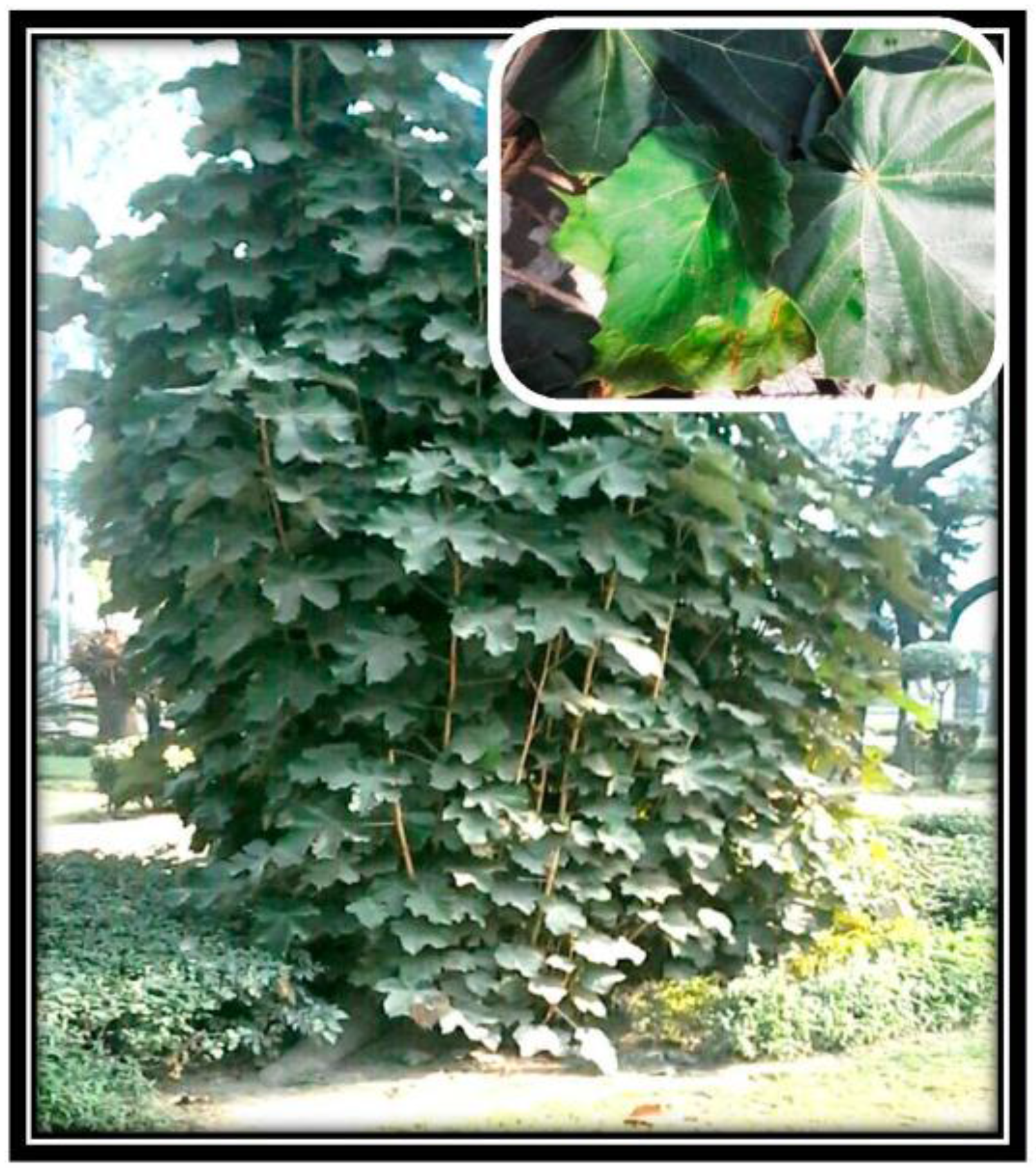 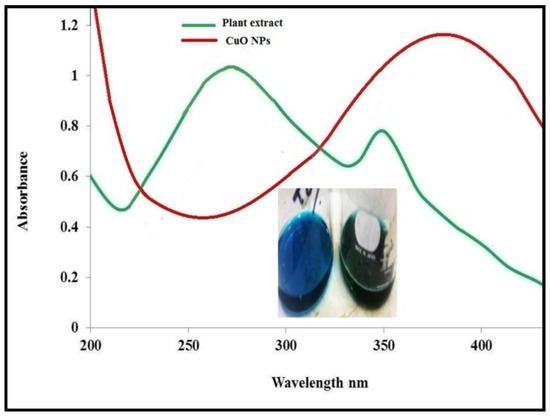 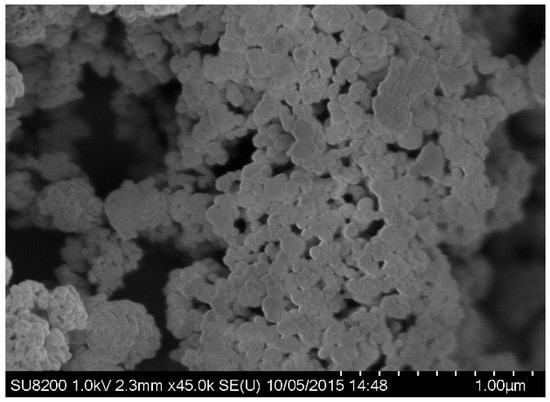 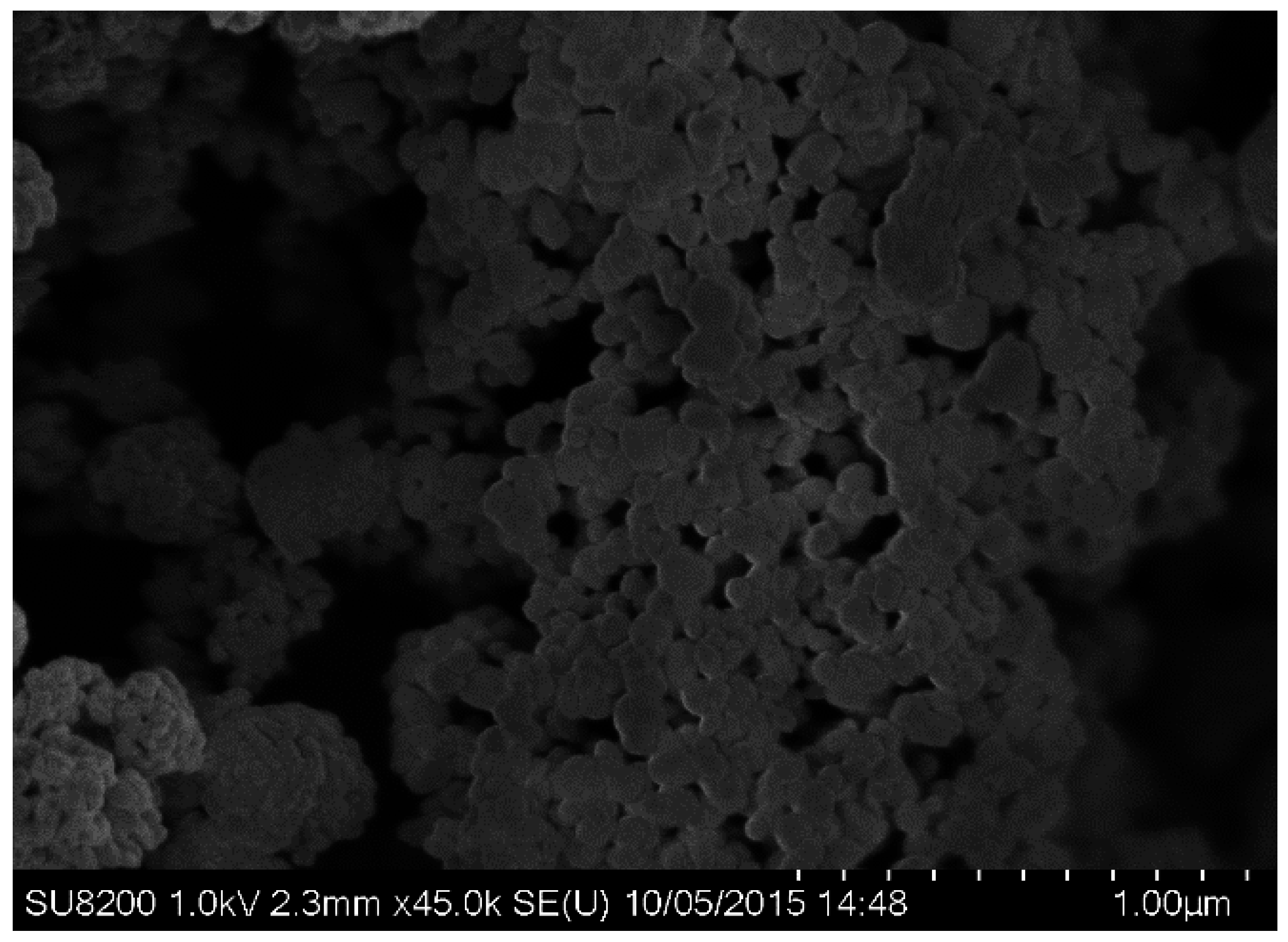 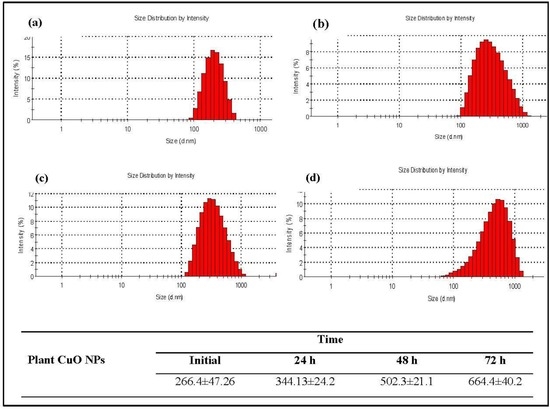 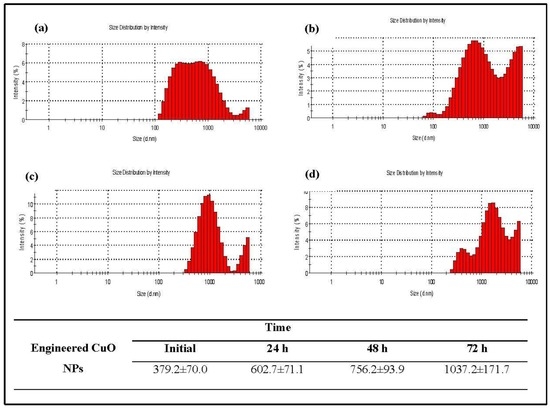 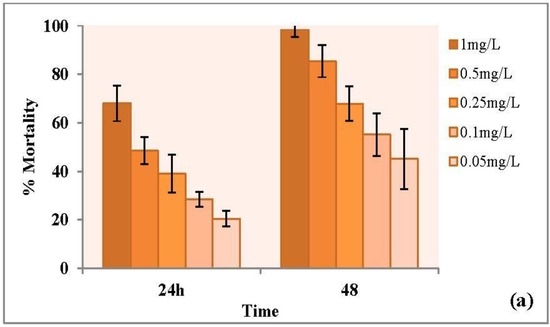 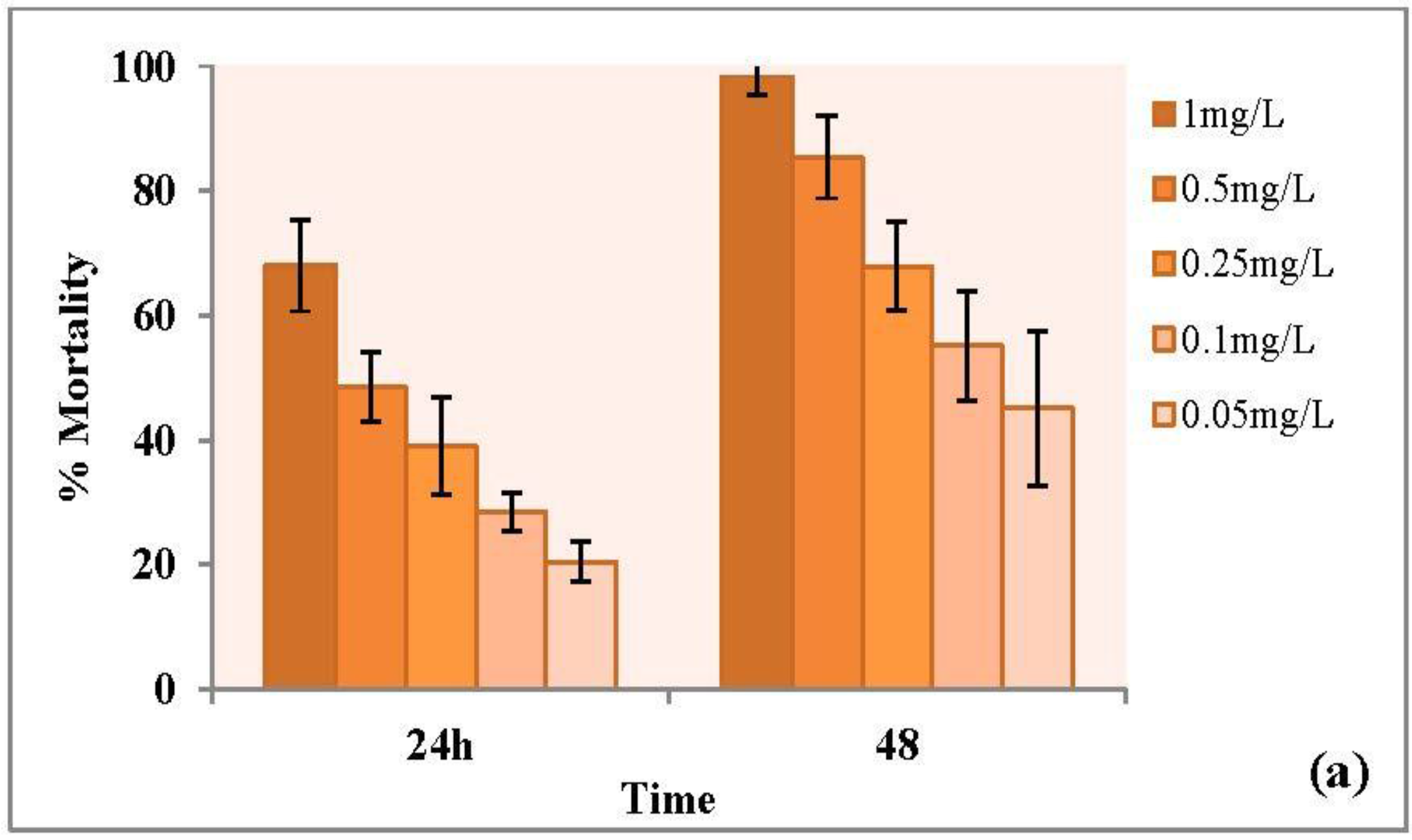 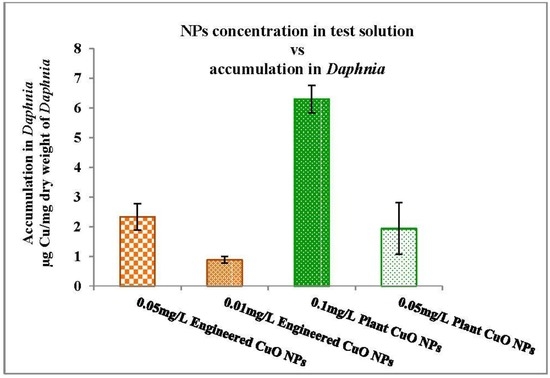