Silver nanoparticles (AgNPs) have been widely used in industry due to their unique physical and chemical properties. However, AgNPs have caused environmental concerns. To understand the risks of AgNPs, Arabidopsis microarray data for AgNP, Ag+, cold, salt, heat and drought stresses were analyzed. Up- and down-regulated genes of more than two-fold expression change were compared, while the encoded proteins of shared and unique genes between stresses were subjected to differential enrichment analyses. AgNPs affected the fewest genes (575) in the Arabidopsis genome, followed by Ag+ (1010), heat (1374), drought (1435), salt (4133) and cold (6536). More genes were up-regulated than down-regulated in AgNPs and Ag+ (438 and 780, respectively) while cold down-regulated the most genes (4022). Responses to AgNPs were more similar to those of Ag+ (464 shared genes), cold (202), and salt (163) than to drought (50) or heat (30); the genes in the first four stresses were enriched with 32 PFAM domains and 44 InterPro protein classes. Moreover, 111 genes were unique in AgNPs and they were enriched in three biological functions: response to fungal infection, anion transport, and cell wall/plasma membrane related. Despite shared similarity to Ag+, cold and salt stresses, AgNPs are a new stressor to Arabidopsis. View Full-Text
Keywords: silver nanoparticles; silver ions; abiotic stresses; gene expression; protein functions; pathways; Arabidopsis thaliana silver nanoparticles; silver ions; abiotic stresses; gene expression; protein functions; pathways; Arabidopsis thaliana
►▼ Show Figures 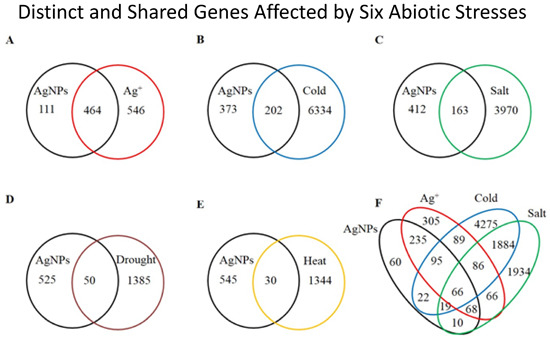