Concerns about nanotechnology have prompted studies on how the release of these engineered nanoparticles impact our environment. Herein, the impact of 20 nm silver nanoparticles (AgNPs) on the life history traits of Arabidopsis thaliana was studied in both above- and below-ground parts, at macroscopic and microscopic scales. Both gross phenotypes (in contrast to microscopic phenotypes) and routes of transport and accumulation were investigated from roots to shoots. Wild type Arabidopsis growing in soil, regularly irrigated with 75 μg/L of AgNPs, did not show any obvious morphological change. However, their vegetative development was prolonged by two to three days and their reproductive growth shortened by three to four days. In addition, the germination rates of offspring decreased drastically over three generations. These findings confirmed that AgNPs induce abiotic stress and cause reproductive toxicity in Arabidopsis. To trace transport of AgNPs, this study also included an Arabidopsis reporter line genetically transformed with a green fluorescent protein and grown in an optical transparent medium with 75 μg/L AgNPs. AgNPs followed three routes: (1) At seven days after planting (DAP) at S1.0 (stages defined by Boyes et al. 2001 [41]), AgNPs attached to the surface of primary roots and then entered their root tips; (2) At 14 DAP at S1.04, as primary roots grew longer, AgNPs gradually moved into roots and entered new lateral root primordia and root hairs; (3) At 17 DAP at S1.06 when the Arabidopsis root system had developed multiple lateral roots, AgNPs were present in vascular tissue and throughout the whole plant from root to shoot. In some cases, if cotyledons of the Arabidopsis seedlings were immersed in melted transparent medium, then AgNPs were taken up by and accumulated in stomatal guard cells. These findings in Arabidopsis are the first to document specific routes and rates of AgNP uptake in vivo and in situ. View Full-Text
Keywords: Arabidopsis thaliana; silver nanoparticles; life history traits; transport Arabidopsis thaliana; silver nanoparticles; life history traits; transport
►▼ Show Figures 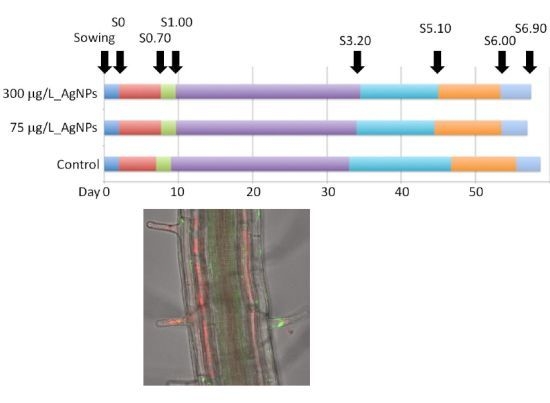