:
The irradiation of silver-to-sodium ion-exchanged glass with 1.06-μm nanosecond laser pulses of mJ-range energy results in the formation of silver nanoparticles under the glass surface. Following chemical removal of ~25-nm glass layer reveals a pattern of nanoparticles capable of surface enhancement of Raman scattering (SERS). The pattern formed when laser pulses are more than half-overlapped provides up to ~105 enhancement and uniform SERS signal distribution, while the decrease of the pulse overlap results in an order of magnitude higher but less uniform enhancement.
Keywords:
silver nanoparticles; SERS; glass; ion-exchange; nanosecond laser 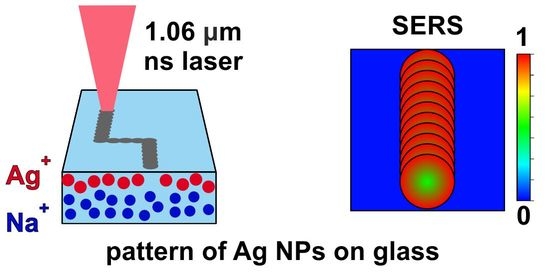 It is recognized, glasses with silver nanoparticles (SNPs) on their surface are beneficial in surface-enhanced Raman spectroscopy (SERS) employed in chemo- and bio-sensors and in microfluidic platforms for screening, monitoring, and quantitative analysis of a molecular probe [1,2]. Moreover, their biomedicine-related implementation includes antibacterial, antifungal, and antiviral applications [3,4]. The attractiveness of multicomponent glasses as substrate material is their well-developed technology and low price, while the main advantages of SNPs are selective toxicity and the highest among other noble metals quality factor of surface plasmon resonance (SPR) from visible to infrared spectral range [5]. Mentioned applications require SNPs to be placed on the glass surface, which can be implemented by various methods. The latter includes depositing thin silver films either followed by their annealing [6] or combined with different lithographic techniques [7,8]; depositing nanoparticles using laser ablation of silver targets [9]; sedimentation of SNPs from solutions [10], e.g., resulting from the laser irradiation [11]; thermal [12] or reactive reduction [13] of silver ions in silver-ion-exchanged glasses followed by SNPs precipitation on their surface by out-diffusion. One more developing approach to the formation of SNPs is the irradiation of silver-ion-exchanged glasses by ultra-short laser pulses of different wavelengths in the visible [14,15], IR [16,17], and UV [18,19] spectral ranges or by continuous short-wavelength lasers [20,21]. Contrary to others, this technique allows direct formation of SNPs and “drawing” of a given 2D pattern filled with SNPs. Note, only in the case of irradiation by either continuous [22] or femtosecond [23] laser it was demonstrated that SNPs form on the glass surface, while there are no studies, to our knowledge, related to SNPs distribution in other cases.
Overall, in the listed methods, SNPs are formed directly on the surface and while it is beneficial for, e.g., SERS-activity, fabricated substrates are one-use and suffer from silver sulfidation and oxidation while stored, if non-protected [24].
In this paper, we studied formation and distribution of SNPs in a silver-ion-exchanged glass after its nanosecond IR laser irradiation. We demonstrated that pattern from SNPs repeats laser beam trajectory while SNPs formation happens in the subsurface glass layer. Finally, SERS-activity of SNPs in the laser-irradiated regions subjected to chemical etching was confirmed. Thus, the study demonstrates the route to fabricate SERS substrates of a given design, which have potential for multiple usages: sequential etching of different parts of the substrate uncovers SNPs which are not affected by interaction with the environment.

We used a soda-lime glass (Agar Scientific Ltd., Stansted, UK) containing 14.3 wt.% of sodium oxide. A 1-mm thick slide was silver-ion-exchanged for 20 min in the melt of (AgNO3)5wt.%(NaNO3)95wt.% (LenReactiv, Saint Petersburg, Russia) at 325 °C. The maximal depth of silver ions penetration (zero concentration level) and the maximal silver oxide concentration at the glass surface were evaluated following the method of Ref. [25] as ~8 μm and ~10.5 wt.%, respectively. Thus, more than 70% of sodium in the glass was replaced by silver. Generally, higher content of silver ions in the glass results in higher number of SNPs. However, following increase of AgNO3 content in the melt demonstrated only a weak increase in silver ions concentration in the glass, while using of highly concentrated or pure AgNO3 melt is restricted because of its decomposition.
We irradiated the silver-ion-exchanged glass with a Nano L Nd:YAG laser (wavelength of 1.06 μm, Litron Lasers Ltd., Warwickshire, UK) to form SNPs. The laser provided 6-nanosecond long pulses with the maximal energy of 14 mJ, whose frequency could be varied from 0.1 to 30 Hz. Particularly, the laser beam was focused on the glass surface to a spot size of ~250 μm in diameter and some regions (“lines”) were irradiated using the computer-driven platform MT3/M-Z8 3D (Thorlabs Inc., Newton, NJ, USA) that moved the glass slide in the plane perpendicular to the laser beam at the speed of 200 μm/s. Thus, a line was a row of either individual irradiated spots (0.1–1 Hz) or overlapped spots. In experiments, starting from 5.6 mJ pulse energy, intense flashes of light were observed under the irradiation of the silver-ion-exchanged glass. This pulse energy also corresponded to yellowish coloration of the sample. Further increase in pulse energy resulted in darkening of the sample and finally destruction of the surface at 7.5 mJ. Therefore, we studied lines irradiated at 6.3 mJ and 2 Hz, and 5.6 mJ and 3.5 Hz, the overlap being ~50% and ~70% of a single irradiated spot area, respectively.
We measured optical absorption in the laser-irradiated regions using a homemade setup with QE65 Pro spectrometer (OceanOptics Inc., Dunedin, FL, USA), 50 μm collecting optical fiber and 20×/0.4 objective (~50 μm collection spot). The surface of the irradiated lines was also characterized with optical profilometer Wyko NT9300 (Veeco Instruments Inc., Plainview, NY, USA) and scanning electron microscope JSM 7001F (JEOL, Tokyo, Japan) with energy-dispersive X-ray spectroscopy (EDS) system INCA PentalFETx (Oxford Instruments, Abingdon, UK).
Formed structures were tested as SERS substrates using Raman spectrometer Alpha 300R (WITec, Ulm, Germany) equipped with 532 nm laser and 10×/0.25 objective (~3 μm collection spot). We chose 1,2-di(4-pyridyl)ethylene (BPE, Sigma-Aldrich Co., St. Louis, MO, USA) as a probe molecule, which is commonly used in case of 532 nm excitation because of its non-resonant behavior [26,27]. The spectra were collected in the center of the dried droplet (4 μL) of BPE water solution (10−4 M) along the laser-irradiated lines on the glass. We mapped the regions 100 × 3 μm2 with 5 μm step, the integration time was 3 s per point, the laser power ≈0.4 mW. To evaluate the enhancement factor (EF), we collected Raman spectrum from BPE crystallites, which were placed on the non-irradiated and non-ion-exchanged glass surface. The spectrum was averaged over 20 measurements across different crystallites, the integration time was 3 s per measurement and laser power ≈0.4 mW. The average size of the crystallites was ~25 μm. The background in all of the measured spectra was subtracted using MathLAB function [28] (MathLAB 9.7, The MathWorks Inc, Natick, MA, USA) based on the algorithm described in Ref. [29].
Additionally, we performed chemical etching of the laser-irradiated samples in HF(5 μL):NH4F(5 g):H2O(40 g) (LenReactiv, Saint Petersburg, Russia) solution (polishing etchant) at room temperature. This etchant properly removes silicates [30], does not leave toxic reactants capable of interaction with BPE [31] and does not etch or oxidize silver [32]. The absence of a dielectric layer on the surface of SNPs is critical for SERS, for its presence diminishes or suppresses SERS and results in SNPs’ SPR spectral shift [33]. However it is worth mentioning that the latter phenomenon, in spite of decreasing SERS signal, is in use to tune the SPR wavelength [34], and covers allow protection of SNPs from contaminations [35].

It is shown that IR nanosecond pulsed laser irradiation of silver-to-sodium ion-exchanged glasses results in the formation of glass-covered silver nanoparticles. ~25-nm deep etching removes the cover, and allows one to use uncovered nanoparticles to enhance Raman scattering from probed molecules. Surface distribution of nanoparticles and Raman enhancement depend on the overlapping percentage of the spots consecutively irradiated with laser pulses, e.g., 70% of the overlapping provides uniform distribution and up to ~105 enhancement. The technique allows formation of given 2D SERS-active structures on the surface of the glass substrate and suitable for sensing applications.

Investigation, E.B., V.K., and A.R.; writing—original draft preparation, E.B.; supervision, T.M. and A.L. All authors have read and agreed to the published version of the manuscript.

With the increase in the laser pulse energy at the fixed pulse frequency (3 Hz) from 5 to 6.3 mJ, we observed an increase in the crater depth, up to two times, as well as a slight (~1.4 times) increase in the crater diameter. In accordance with the obtained data, using the methodology [55], the sputtering (ablation) threshold was calculated, which amounted to ~3.2 mJ (7 J/cm2). Note that this threshold is several times less than the threshold for non-ion-exchanged glass [56]. We believe, it is because silver ions and clusters formed in the ion-exchanged glass behave as the source of seed electrons for avalanche ionization process and reduce the ablation threshold for nanosecond irradiation the same way as tin impurities in glasses do [56].
An upper estimate of the fraction of laser energy absorbed by soda-lime glass, the lifetime, and the thickness of glass layer melted because of the absorption of this energy without the account of lateral heat fluxes can be made using the following relations.
Equation (A1) for the ablation efficiency (fraction of absorbed energy) θ [57]: where density, specific heat capacity, and Tv = 2500–3500 °C evaporation temperature of the glass [58], I = 6.3 mJ the maximal laser pulse energy and V = 9 × 10−10 cm3 the volume of the crater formed as a result of the ablation at this energy.
Equation (A2) for the thickness of molten glass layer (Tm = 720 °C the softening temperature of the glass [59]) at the average surface density of the maximal pulse energy [60]:
Equation (A3) for the melt lifetime (before hardening): where D = 0.49 × 10−6 m2/s thermal conductivity of the glass [58].
The estimated lifetime of the melt is much shorter than the interval between the laser pulses, which allows us to state that the glass solidifies between consecutive pulses. 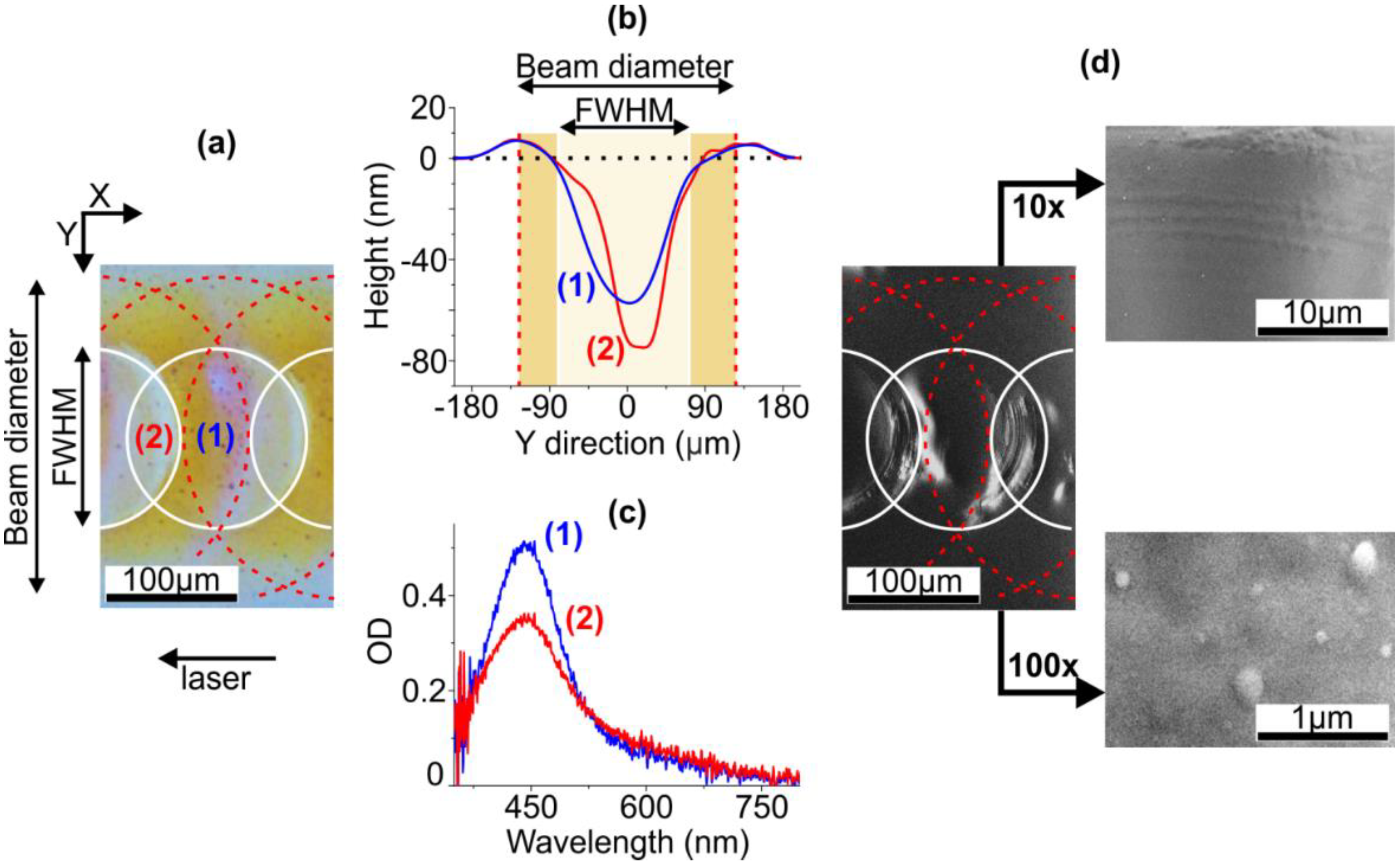