:
Composites made of a biodegradable polymer, e.g., polylactic acid (PLA) and hydroxyapatite nanoparticles (HAP NPs) are promising orthopedic materials. There is a particular need for biodegradable hybrid nanocomposites with strong mechanical properties. However, obtaining such composites is challenging, since nanoparticles tend to agglomerate, and it is difficult to achieve good bonding between the hydrophilic ceramic and the hydrophobic polymer. This paper describes a two-step technology for obtaining a ceramic matrix composite. The first step is the preparation of composite granules. The granules are obtained by infiltration of porous granules of HAP NPs with PLA through high-pressure infiltration. The homogeneous ceramic-polymer granules are 80 μm in diameter, and the composite granules are 80 wt% HAP NPs. The second step is consolidation of the granules using high pressure. This is performed in three variants: Uniaxial pressing with the pressure of up to 1000 MPa at room temperature, warm isostatic compaction (75 MPa at 155 °C), and a combination of the two methods. The combined methods result in the highest densification (99%) and strongest mechanical properties; the compressive strength is 374 MPa. The structure of the ceramic matrix composite is homogeneous. Good adhesion between the inorganic and the organic component is observable using scanning electron microscopy.
Keywords:
hybrid; biodegradable; composite; hydroxyapatite; polylactid acid

In this study, HAP NPs were prepared by the wet chemical precipitation method from calcium oxide (Fluka, Munich, Germany), orthophosphoric acid (Sigma-Aldrich, Steinheim, Germany) solution, and deionized water. The HAP NPs granules were obtained by the spray drying method using a spray dryer (Mini Spray Dryer b-290, Buchi, Flawil, Switzerland) with a fitted nozzle with the diameter of 1.4 mm. The inlet and outlet temperatures of the nozzle were adjusted to 220 °C, and 96 °C, respectively. Aqueous dispersions of HAP NPs, with the HAP NPs concentration of 10 wt%, were prepared using the homogenizing device. The specific surface area of HAP NPs was 77 m2/g and the density was 2.83 g/cm3. The Ca/P ratio was 1.73. The HAP average particle size calculated, based on the specific surface area and skeletal density result was 28 nm, and the average crystallite size was 29 nm. The average size of HAP NPs was equal to the average crystallite size, which means that the HAP NPs were built of single crystals. Figure 1 shows the results of the powder X-ray diffraction (XRD) measurements of the HAP NPs.
PLA is a biodegradable and biocompatible synthetic polymer with the tensile yield strength of 62 MPa, tensile elongation of 3.5%, density of 1.24 g/cm3, and relative viscosity of 3.3. The polylactide used in this research is a commercial material with the trade name Ingeo biopolymer 3052D, produced by NatureWorks LLC, Minnetonka, MN, USA. The material takes the form of transparent granules, which are sized approximately 0.5 mm.

Composite granules (PLA/HAP NPs) of HAP NPs and PLA with a high content (up to 80 wt%) of calcium phosphate phase were prepared by a solvent evaporation method. First, the determined amounts of PLA were dissolved in dichloromethane to achieve a composite with the total organic fraction of 20 wt%. Next, HAP NPs granules were suspended in the polymer solution and subjected to magnetic stirring for two hours at room temperature. Subsequently, we conducted a high-pressure impregnation of PLA solution in HAP NPs granules. The suspensions were cast into Petri dishes. The dishes were left at room temperature for 12 h in order to allow full evaporation of the dichloromethane. A powder of the composite granules was prepared using ball-milling (FRITSCH Pulverisette 5, Weimar, Germany) and cryo-milling (IKA® A11 basic analytical mill, Staufen, Germany).

High-pressure forming was performed with three variants: (1) Cold high-pressure pressing, (2) warm isostatic pressing, and (3) a combination of the above two variants. Figure 2 shows the diagram of forming the composite. The LCP20 press in the Institute of High Pressure PAS was used during this research. The temperature was given and controlled by a proportional–integral–derivative controller (model RE93, Lumel S.A., Zielona Góra, Poland), together with a temperature sensor (T type thermocouple, model T-208p-K-1-300-40-2,5-SO-1-6-400, Termo-Precyzja, Wrocław, Poland).
Variant 1 involved cold pressing at a pressure of up to 1 GPa. The method involved filling a steel mold with the above-described granules and applying axial pressure at room temperature. Samples were kept under pressure for 10 s. The compaction density was investigated as a function of pressure. Five samples at 2 g each were pressed. A cuboid was formed with the dimensions of 4 × 4 × 35 mm. The mechanical strength was measured for three samples produced at a given pressure.
The second variant was warm isostatic pressing, with the consolidation temperature of up to 200 °C and the pressure of 75 MPa. Five samples at 2 g each of composite granules were placed in an elastic mold with the diameter of 8 mm and the height of 15 mm. These were pressed using isostatic pressure at 165 °C. The pressure vessel chamber was filled with methyl silicone oil. The optimum temperature was selected experimentally.
Variant 3, which involved combining the above methods in two stages, used the following two conditions:
The mechanical properties and densification were investigated.

The results of this paper constitute a response to the lack of sufficient mechanical strength of the bioresorbable composites being hydroxyapatite nanoparticles in a polymer matrix (e.g., polylactic acid (PLA)) for bone substitution purposes in bone regeneration, which have been obtained so far. The aim and novelty of the research was to obtain a homogeneous hybrid composite, characterized by a high degree of densification, with the HAP NPs content of up to 80 wt%, without the presence of agglomerates of NPs.
We have developed a two-step method for a bioresorbable composite with a very high content of a ceramic in a polymer matrix. The composite has potential for orthopedic applications as it achieved the compressive strength of 375 MPa, the Young’s modulus of 7 GPa, and the densification of 99%. The first step was to prepare composite granules of porous HAP NPs granules and PLA by high-pressure infiltration. The second step was the consolidation of the composite granules.
Three consolidation variants for the forming were tested. The best results were obtained by compaction in the third variant: uniaxial cold pressing and subsequent isostatic pressing at 155 °C. We successfully formed a composite, consisting of HAP NPs at 80 wt% and a bioresorbable polymer (PLA) for the balance. The composite had a homogeneous structure, and we observed good adhesion between the polymer and the ceramic. The obtained composite had an average HAP NPs particle size of 28 nm. This approach permitted us to consolidate the composite without nanoparticle growth and degradation of the polymer.
The technology can be used to form a thermosetting composite with a high content of a ceramic phase at a relatively low temperature of up to 200 °C. The manufactured composites are promising materials for applications such as implants in bone regeneration.

Conceptualization, J.L. and E.P.; conceived and designed the experiments, M.S. and E.P.; analysis, E.P and J.W.; investigation, K.S. and B.R.-B. and E.P.; writing—original draft preparation, E.P.; writing—review and editing, W.L.; supervision, W.S. and J.L. All authors have read and agreed to the published version of the manuscript.

This work was funded by the The National Centre for Research and Development, project GoIMPLANT: Tough, Strong and Resorbable Orthopaedic Implants, No. M-ERA.NET/2012/01/2013 (2013-2016).

The authors would like to thank Tadeusz Chudoba, Stanislaw Gierlotka and Jan Mizeracki (Institute of High Pressure Physics of the Polish Academy of Sciences, Warsaw, Poland). 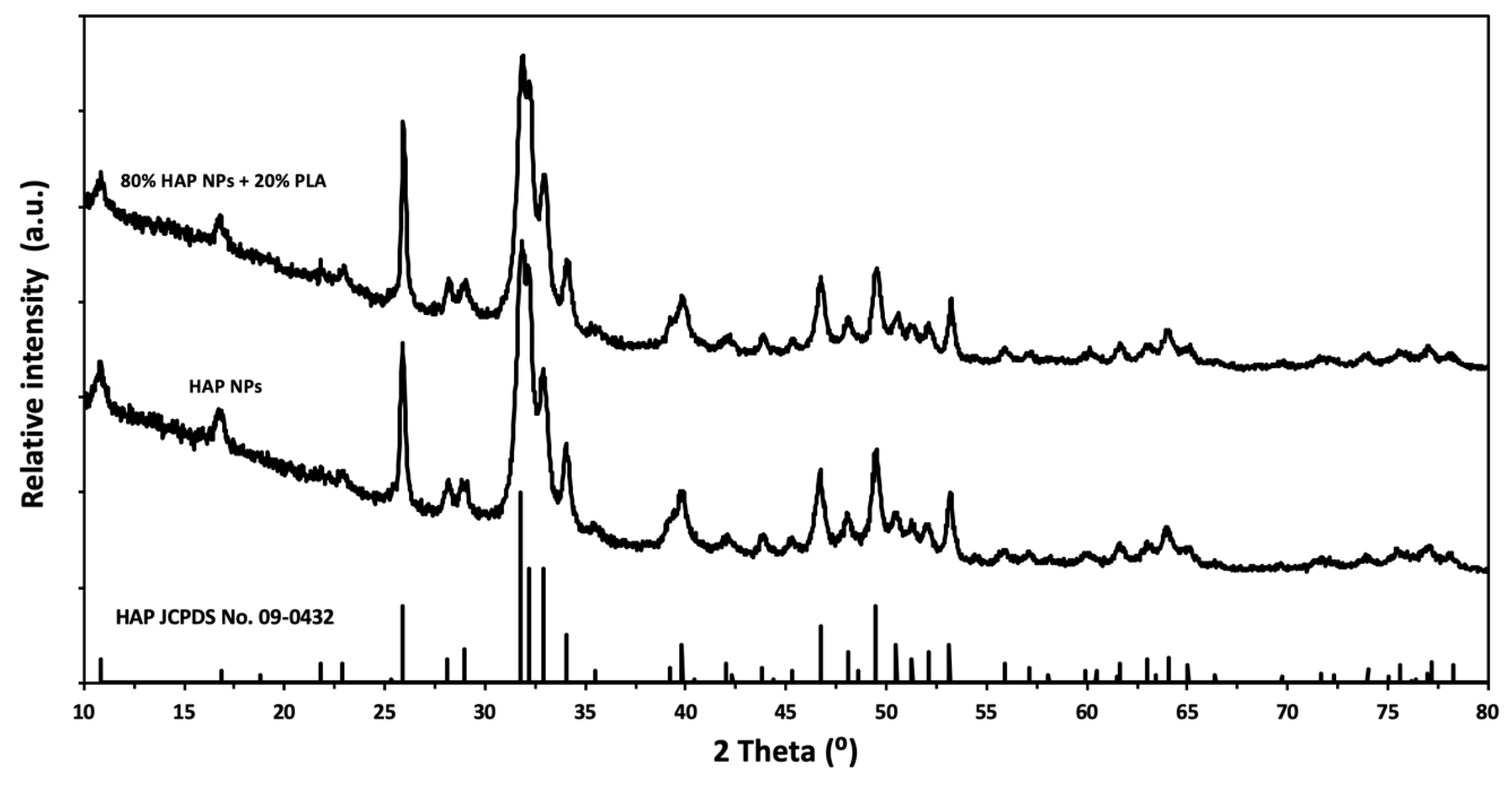 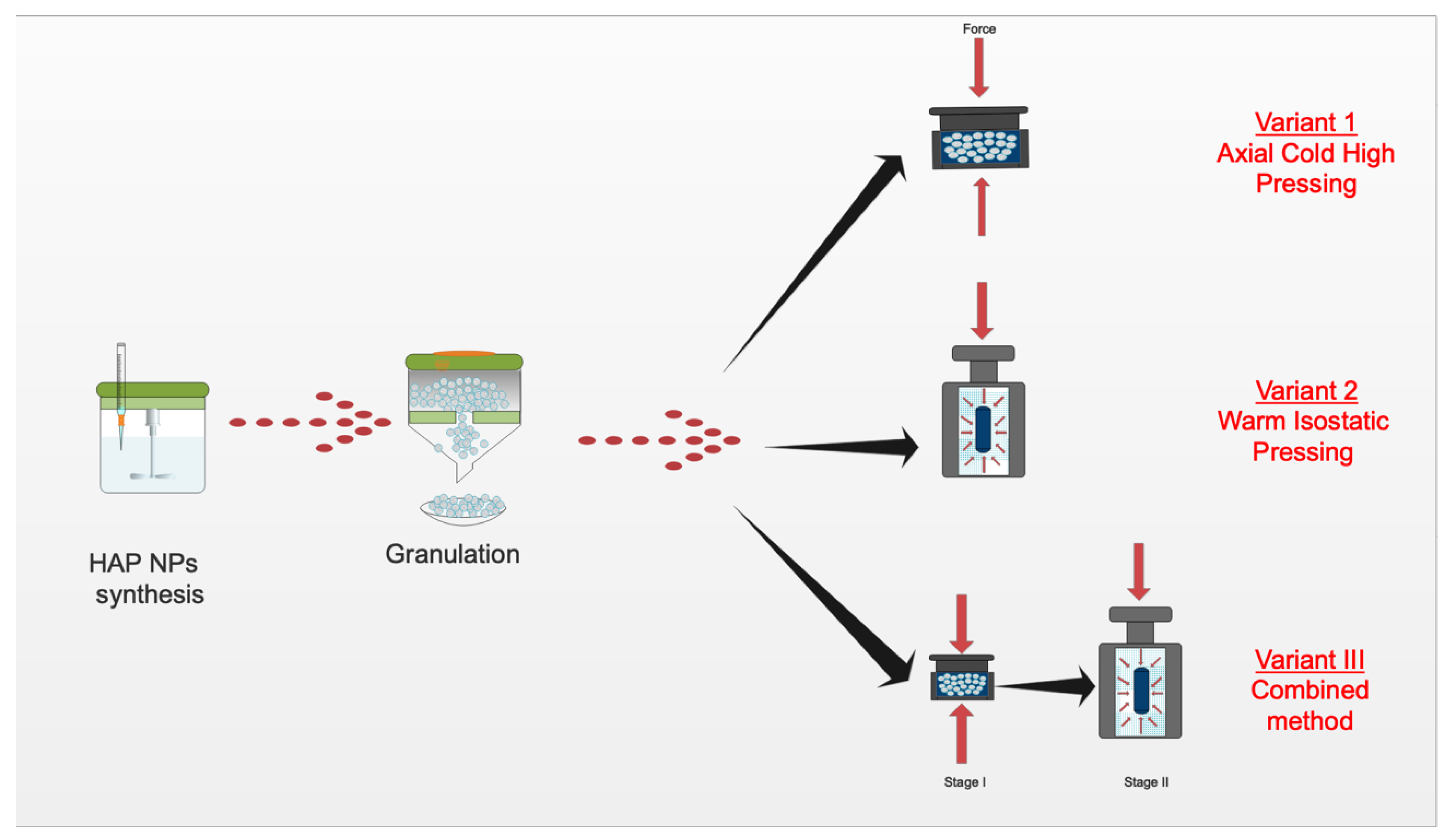 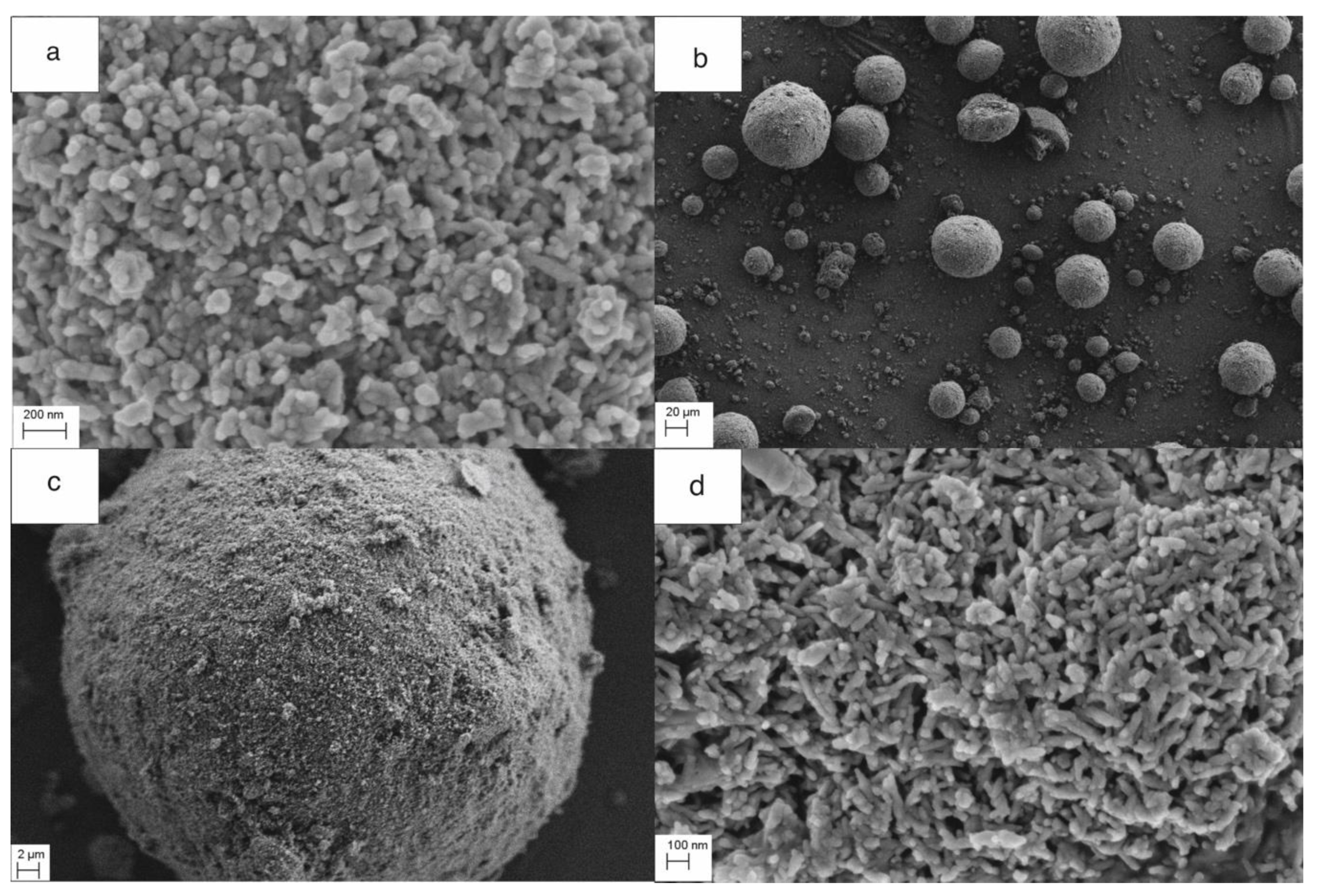 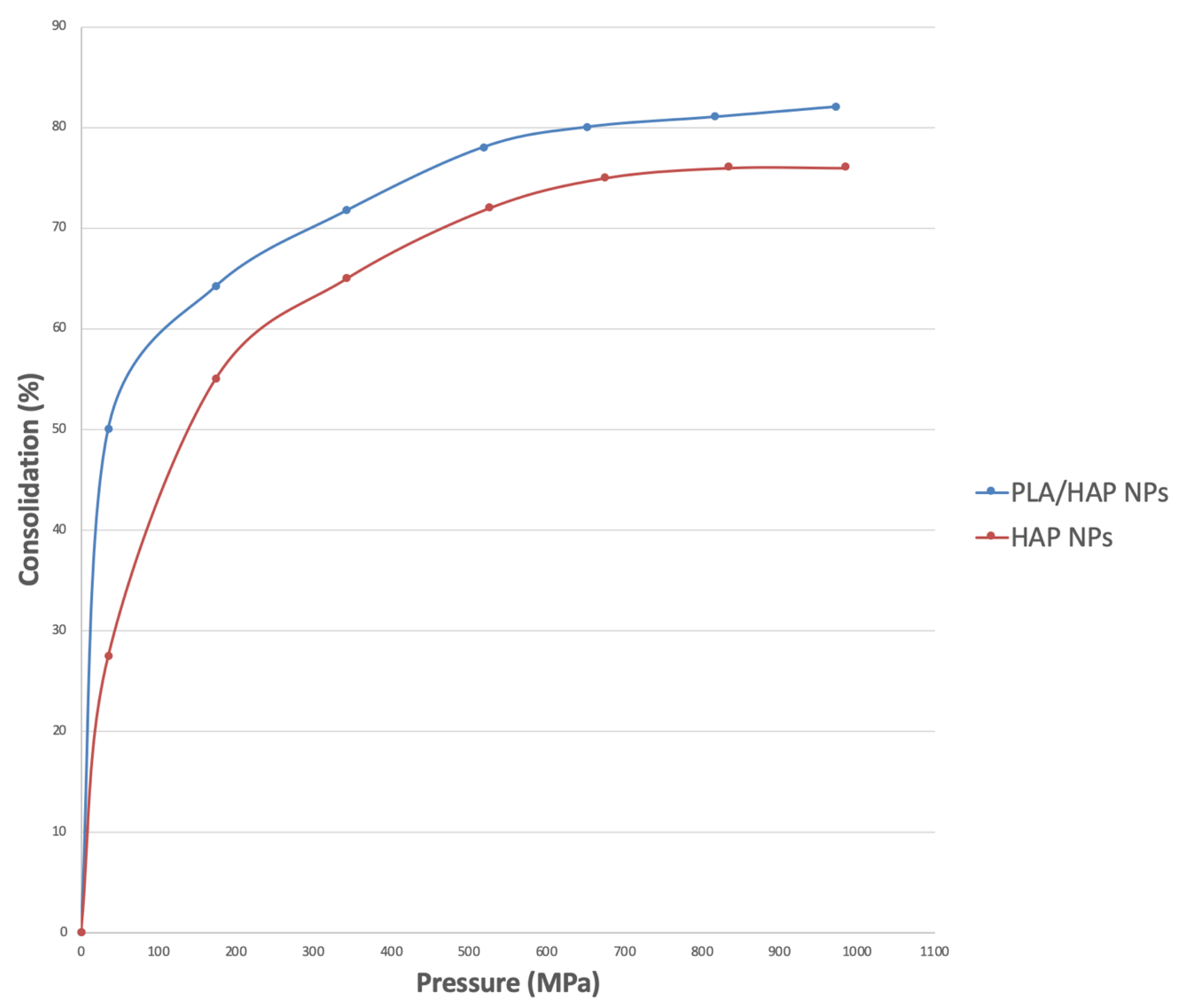