:
In this contribution, the synthesis of the metal−organic framework (MOF) based on lanthanum that exhibits trigonal prism shape is presented. The length of a single side of this structure ranges from 2 to 10 μm. The carbonized lanthanum-based organic framework (CMOF–La) maintained the original shape. However, the lanthanum oxide was reshaped in the form of rods during the carbonization. It resulted in the creation of parallel arranged channels. The unique structure of the carbonized structure motivated us to reveal its adsorption performance. Therefore, the adsorption kinetics of acid red 18 onto a carbonized metal−organic framework were conducted. Various physicochemical parameters such as initial dye concentration and pH of dye solution were investigated in an adsorption process. The adsorption was found to decrease with an increase in initial dye concentration. In addition, the increase in adsorption capacity was noticed when the solution was changed to basic. Optimal conditions were obtained at a low pH. Kinetic adsorption data were analyzed using the pseudo-first-order kinetic model, the pseudo-second-order kinetic model and the intraparticle diffusion model. The adsorption kinetics were well fitted using a pseudo-second-order kinetic model. It was found that the adsorption of anionic dye onto CMOF–La occurs by hydrophobic interactions between carbonized metal-organic framework and acid red 18.
Keywords:
anionic dye adsorbent; lanthanum; metal–organic framework (MOF); carbonization

The possible mechanism of adsorption on carbon materials are the π-π interactions, hydrogen bonding and Van der Waals interactions [37,38]. The π-π interactions are independent on the influence of environmental factors such as pH, ionic concentration, temperature and concentration [38]. The reports on AR18 adsorption onto carbon nanostructures show that π-π interactions are the dominant mechanism [39,40,41]. Taking into account the changes in the functional groups in the CMOF before and after dye adsorption, electrostatic interactions seems to be the dominant mechanism for the adsorption of acid red 18 onto carbonized MOF. The adsorption capacities are dependent on pH, suggesting the physical adsorption through the hydrophobic effects between CMOF and AR18 [42].
Azo dyes (e.g., acid red 18) are one of the synthetic dyes that are used in many industries. The treatment and disposal of dye-contaminated wastewater are one of the most serious environmental problems. Intermediate products of azo dyes are toxic, mutagenic and carcinogenic to humans and aquatic life. For this reason, there are many reports on the adsorption processes of this group of dyes. Table 2 lists the comparison of parameters and adsorption capacity of AR 18 dye onto carbonized MOF structures and other carbon adsorbents. The maximum adsorption capacity Qe was 44.26 mg/g onto CoOF, similar to the CMOF. In accordance with the state of art on acid red 18 adsorption, the highest maximum adsorption capacity was observed for chitosan-based samples (691 mg/g) [4]. According to the W.H. Cheung et al. the adsorption of the acid dyes on the chitosan occurs through the electrostatic attraction between two counterions: the amino groups of chitosan and sulfate groups of acid dye [43]. As reported by Y.C. Wong et al. the adsorption efficiency may mainly be attributed to the chemical structure and molecular size. Since larger dye ions, like AR 18, do not completely penetrate the adsorbent pore and preferentially adsorb on the outer surface [2]. The summarized data (Table 2) show that carbonized MOF–La shows high adsorption capacity. This can be due to the wide pores formed during MOF–La carbonization. Lanthanum oxide shows low toxic effects [44,45] and their toxic effect increases when the size decreases from micro to nanoscale [46]. Due to the fact that the material contains a low amount of metal oxide residues, its toxicity can be comparable to amorphous carbon structures. The adsorption acid red 18 onto CMOF is determined by pseudo-second-order similar to the other carbon structures listed in Table 2.

The MOF–La was obtained via a solvothermal route. A mixture of lanthanum (III) chloride (655 mg) and terephthalic acid (198 mg) was dissolved in 240 mL N, N-dimethylformamide solution. The prepared mixture was then stirred for 24 h at a temperature of 110 °C. After 24 h obtained composition was cooled to the room temperature and centrifuged to remove the solvent.

Porous carbon derived from MOF–La was obtained by direct thermolysis of the as-prepared sample. The sample was introduced to a silica quartz boat and then inserted into the center of a tubular furnace. First, the furnace was heated from room temperature to 115 °C in 1 h to remove the solvent, then heated to the temperature of 1000 °C. The black MOF–La powder was maintained at this temperature for 3 h with an Ar flow of 100 sccm. After the carbonization process, the tubular furnace was cooled to room temperature. The materials referes to CMOF-La.
Next, the material was purified to remove metal from the structure. Therefore, the carbonized sample was dissolved in 10 mL of 35% HCl and sonicated for 1 h. Then the solution was centrifuged, and black powder was collected. This sample is designated as CMOF.

Dye adsorption experiments were carried out in sealed Erlenmeyer flask, where 250 mL of dye solution with known initial dye concentration was placed. The initial concentrations of dyes were varied from 5 to 20 mg of Acid red 18. The adsorbent concentration was constant at 40 mg/L. The flask with a dye solution was agitated with a magnetic stirrer in order to achieve homogeneity. To observe the effect of pH in the process the experiments were carried out at different pH values from 3 to 11 of the dye solutions with the dye and adsorbent concentration 10 mg/L and 40 mg/L, at room temperature. The pH was adjusted by adding a few drops of diluted hydrochloric acid (0.1 N HCl) or sodium hydroxide (0.1 N NaOH). During adsorption 4 mL of aqueous sample was taken from the solution and the liquid was separated from the adsorbent by centrifugation at 6000 rpm for 5 min. The dye concentration was determined using a spectrophotometer measuring maximum absorbance at 509 nm. The equations used for calculation pseudo-first and second-order kinetic models are presented in the supplementary information.

In conclusion, carbon trigonal prism structure was obtained by the carbonization of La-based MOFs at high temperatures under an inert gas atmosphere. During MOF carbonization, lanthanum formed oxide crystals in the shape of rods. The crystals are formed and extracted during carbonization in one and the same direction from the carbonized MOF. The obtained carbonized organic frameworks were composed of amorphous carbon, with paralleled arrange channels formed upon the extraction of lanthanum oxide.
In this study, we investigated the potential of application carbonized MOF structure based on lanthanum for adsorption of commercial dyes (acid red 18). The kinetic study was performed based on pseudo-first-order, pseudo-second-order and intraparticle diffusion kinetic models. The data indicate that the adsorption kinetics follow the pseudo-second-order kinetic model. The results showed that the adsorption capacity of AR18 onto CMOF increased with the decrease in the initial pH. The adsorption efficiency is strictly related to the changes in the zeta potential.
The proposed MOF structure shows potential in the application for azo-dyes removal exhibiting high adsorption capacity. Therefore, channels formed via the extraction of lanthanum oxide particles can serve for molecules adsorption and storage. 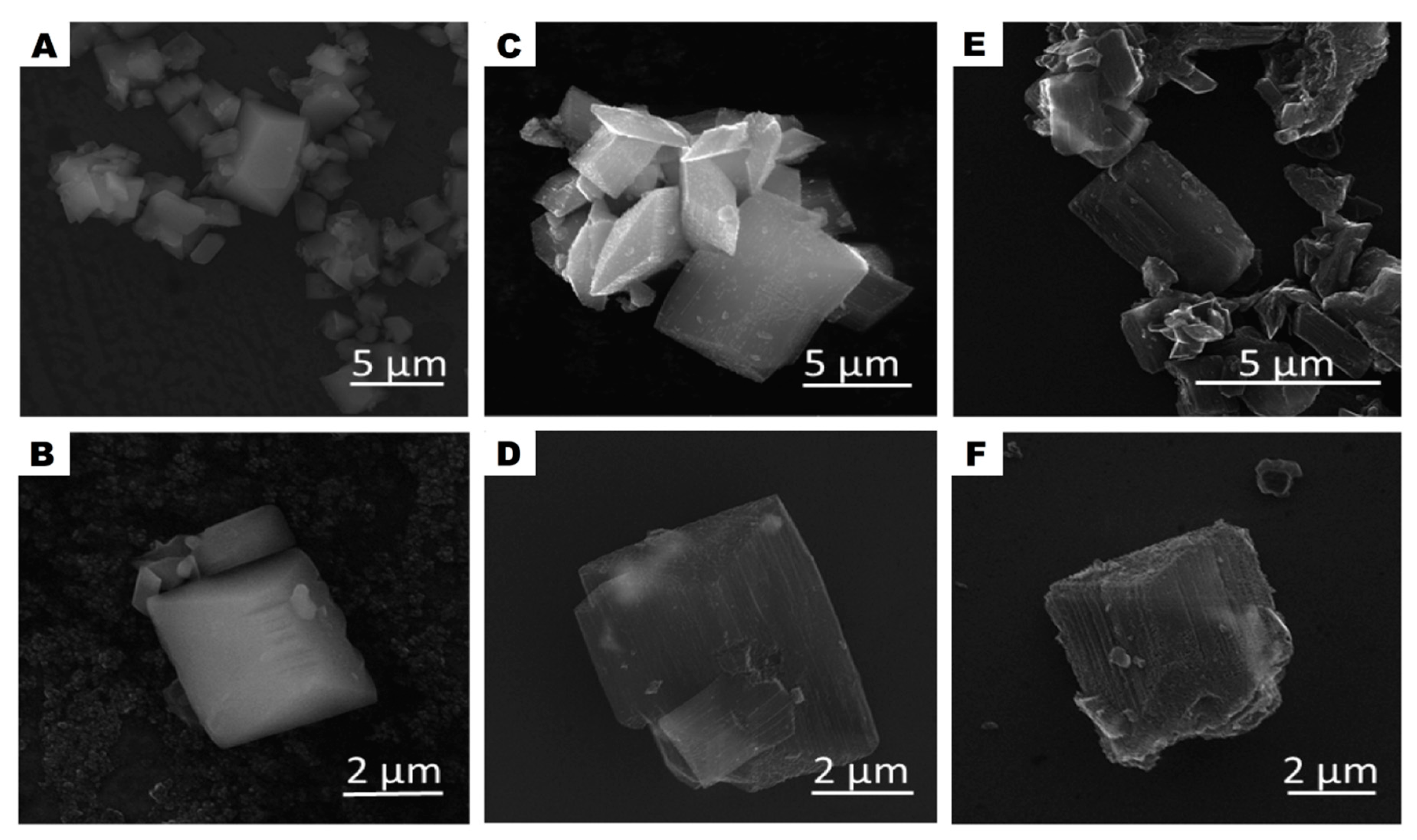