:
The performance of colloidal quantum dot light-emitting diodes (QD-LEDs) have been rapidly improved since metal oxide semiconductors were adopted for an electron transport layer (ETL). Among metal oxide semiconductors, zinc oxide (ZnO) has been the most generally employed for the ETL because of its excellent electron transport and injection properties. However, the ZnO ETL often yields charge imbalance in QD-LEDs, which results in undesirable device performance. Here, to address this issue, we introduce double metal oxide ETLs comprising ZnO and tin dioxide (SnO2) bilayer stacks. The employment of SnO2 for the second ETL significantly improves charge balance in the QD-LEDs by preventing spontaneous electron injection from the ZnO ETL and, as a result, we demonstrate 1.6 times higher luminescence efficiency in the QD-LEDs. This result suggests that the proposed double metal oxide ETLs can be a versatile platform for QD-based optoelectronic devices.
Keywords:
quantum dot (QD); light emitting diode (LED); metal oxide; double electron transport layer (ETL); SnO2 nanoparticles

For a few decades, there has been a growing interest in exploiting unique and superior optical properties of colloidal quantum dots (QDs) in various optoelectronic devices [1,2,3,4]. Near-unity photoluminescence quantum yield (PL QY), narrow emission spectral bandwidth with the full width at half maximum around 30 nm, and easily tunable emission wavelength are the attractive features of QDs for display [5,6,7]. Furthermore, low-cost solution processability and flexibility are also appealing properties of QDs to enable next-generation displays. Based on these advantages, the various QDs comprised of II-VI [8,9], III-V [10,11,12], IV [13,14], perovskite [15,16], are actively developing for display application.
The efficiency of QD-based light-emitting diodes (QD-LEDs) has been improved steadily over the past two decades, and one of the most important breakthroughs was made by employing a metal oxide semiconductor in the electron transport layer (ETL). Suitable energy levels and high electron mobility of metal oxide semiconductors led to efficient charge injection and transport, thereby resulting in notable progress in the luminescence efficiency of QD-LEDs [17,18,19,20]. Various types of metal oxide semiconductors have been employed and investigated, and among those metal oxide semiconductors, zinc oxide (ZnO) has been the most widely employed because of their easy processability, excellent electrical properties, and transparency [21,22]. As a result of intensive investigation, the ZnO ETL is now considered as a standard platform for high-performance QD-LEDs, and the state-of-the-art QD-LEDs also employ ZnO-based ETL [10,22].
Although the performance of QD-LEDs has been developed with the ZnO ETL, ZnO has been often indicated as a major cause for undesirable device performance such as the efficiency droop (i.e., a rapid decrease in the efficiency as current density or luminance increase), poor operational stability, and short lifetime. These features are originated from the non-balanced electron and hole densities in the device, which is attributed to excessive electron injection from the ZnO ETL. It is reported that the similar conduction band edge of ZnO to that of QDs often yields spontaneous electron injection, and faster electron mobility of ZnO than hole mobility of typical organic hole-transporting layer (HTL) materials further worsen the charge imbalance [23].
In order to address this issue and improve the charge balance inside the device, various studies have been employed to suppress electron injection from ZnO. One of the most representative approaches is to employ an interlayer between the ZnO ETL and the QD layer [22,24,25,26,27]. Inserting an ultrathin dielectric has been found to be an efficient way to improve the charge balance by reducing the injection rate of electrons and preventing spontaneous injection from ZnO. Diverse organic insulating materials such as poly(methylmethacrylate) (PMMA) [22] and poly(4-vinylpyridine) (PVPy) [24] have been employed and shown their effectiveness. However, employing an insulating interlayer accompanies a careful optimization of the interlayer thickness because the carrier injection through an insulator relies on a direct or Fowler–Nordheim tunneling. Therefore, with the interlayer thicker than the critical thickness, a carrier injection efficiency decreases significantly, resulting in rapid deterioration of device performance.
An alternative approach is to use an n-type organic semiconductor such as poly(9-vinlycarbazole) (PVK) [25], 1,3,5-tris(2-N-phenylbenzimidazolyl)benzene (TPBi) [26], and 4,7-diphenyl-1,10-phenanthroline (Bphen) [27] for the interlayer. In this case, the organic interlayer acts as a second ETL that slows down the injected electrons from ZnO before they reach the QDs. This ‘double ETL’ approach successfully improved the charge balance, but employing organic semiconductors has a drawback in limited processability due to the non-robustness of organic thin films. Therefore, it is necessary to consider other types of materials to construct the double ETL that can efficiently redeem the ZnO-based single ETL while providing unconstrained processability.
In this study, we introduce a double ETL consisting of two types of metal oxide semiconductor to demonstrate the improved performance of QD-LEDs. The double ETL comprises bilayer stacks of ZnO and tin dioxide (SnO2) nanoparticles (NPs), and here, SnO2 NPs are used to supplement the ZnO ETL; the charge imbalance caused by excessive electron injection from ZnO is controlled by the SnO2 second ETL. Employing the material for the second ETL from the library of metal oxide semiconductors has an advantage in processability over organic semiconductors; similar to ZnO NPs, SnO2 NPs produce highly smooth and robust thin films under low temperature. As a result of improved charge balance using the ZnO/SnO2 double ETL, the QD-LED exhibits notable improvement in luminescence efficiency, suggesting that the double metal oxide ETL could be a new platform to achieve high-performance QD-LEDs.

The SnO2 NPs with a diameter of around 5 nm, dispersed in water, was purchased by MKnano (Missisauga, Canada). The details on the material preparation of ZnO NPs with a diameter of 3−5 nm and CdSe/ZnS QDs with a diameter of 8 nm for red emission are followed by our previous articles [21]. For thermal evaporation, 4,4′,4′′-Tris(carbazol-9-yl)triphenylamine (TCTA) and MoO3, were purchased at Lumtec (New Taipei City, Taiwan) and Al were purchased at iTASCO (Seoul, Republic of Korea). All materials were used as received.
QD-LEDs with the structure of glass/indium tin oxide (ITO)/ETLs (40 nm)/QDs (20 nm)/TCTA (40 nm)/MoO3 (10 nm)/Al (100 nm) were fabricated as following sequence (Figure 1a). The ITO glass substrates were sequentially ultrasonicated with acetone, isopropyl alcohol, and deionized (DI) water and then, dried at 120 °C in an oven for 30 min. For single-layer ETL deposition, 40 nm of ZnO NPs thin films were deposited on the cleaned ITO glass by the spin coating method with 20 mg/mL of ZnO NPs solution dispersed in butanol at 2000 rpm during 60 s. For double-layer ETL deposition, first, 10 mg/mL of ZnO NPs solution dispersed in butanol was spin-coated on the cleaned ITO glass at 2000 rpm during 60 s. The thickness of ZnO NPs for the first ETL was 20 nm. Then, 7.5 mg/mL of SnO2 NPs solution dispersed in DI water was spin-coated on the ZnO NPs film at 2000 rpm during 60 s. The total thickness of the double ETLs was 40 nm. After each spin coating process to deposit ETL, the processed films were dried for 30 min in a 90 °C nitrogen oven. Then, 20 nm thickness of the QD emission layer was deposited on ETLs by spin-coating at 4000 rpm during 30 s, followed by drying in the 70 °C nitrogen oven for 30 min. Then, substrates were moved to the vacuum chamber, and 40 nm thickness of TCTA, 10 nm thickness of MoO3 and 100 nm thickness Al were successively deposited by thermal evaporation method at a pressure below 5 × 10⁻6 Torr. After the deposition, all devices were glass capped with ultraviolet (UV) curing epoxy resin (XNR 5570-B1, Nagase ChemteX Corp., Osaka, Japan) in a nitrogen glove box.
The surface topography and Kelvin probe force microscopy (KPFM) of QDs and NPs were obtained using an atomic force microscope (AFM, XE-100, Park Systems, Suwon, Republic of Korea). The work function of QDs was calculated with calibrating the scanning probe tip with a highly oriented pyrolytic graphite (HOPG). The thickness of thin-film was measured by ellipsometry (MG-1000, Nanoview, Ansan, Republic of Korea). QD-LED performance was characterized by a Keithley 236 source measurement unit and CS-1000A spectroradiometer (Konica-Minolta, Tokyo, Japan).

To summarize, we have introduced double metal oxide ETLs as a new platform to achieve high-performance QD-LEDs. The proposed ETL platform comprises stacks of the primary ZnO ETL and the second ETL comprises SnO2 NPs. The second SnO2 ETL is employed to supplement the standard ZnO ETL in suppressing spontaneous electron injection from ZnO to QDs. With the SnO2 second ETL, charge balance in the QD-LEDs is improved, thereby exhibiting a significant increase in electroluminescence efficiency. The excellent processability and robustness of the proposed double metal oxide ETLs exhibit promising potential as the new platform for QD-based optoelectronic devices.

Investigating, M.P., J.L. and H.L.; writing—original draft preparation, M.P. and J.R.; writing—review and editing, D.L. All authors have read and agreed to the published version of the manuscript. 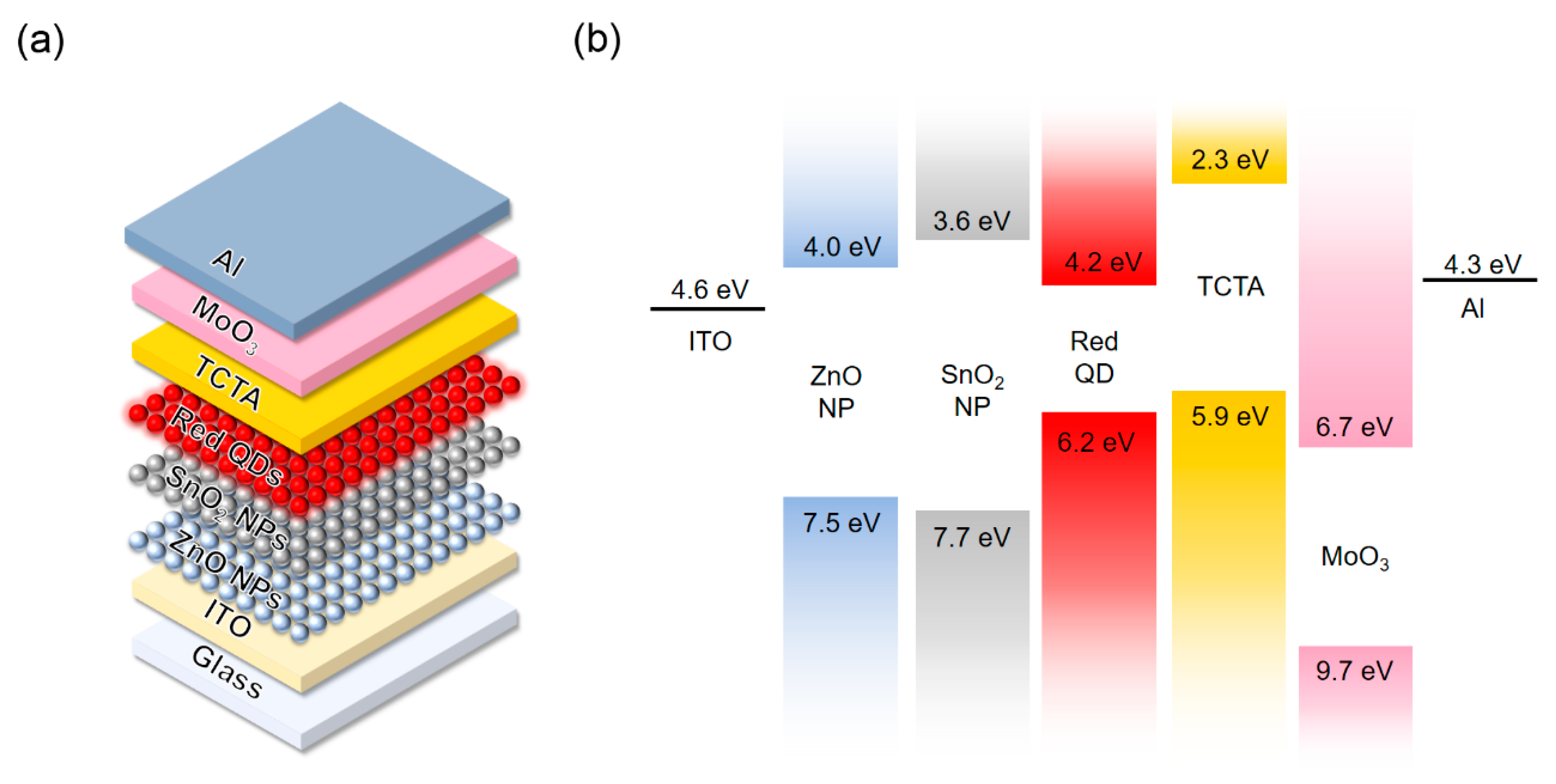 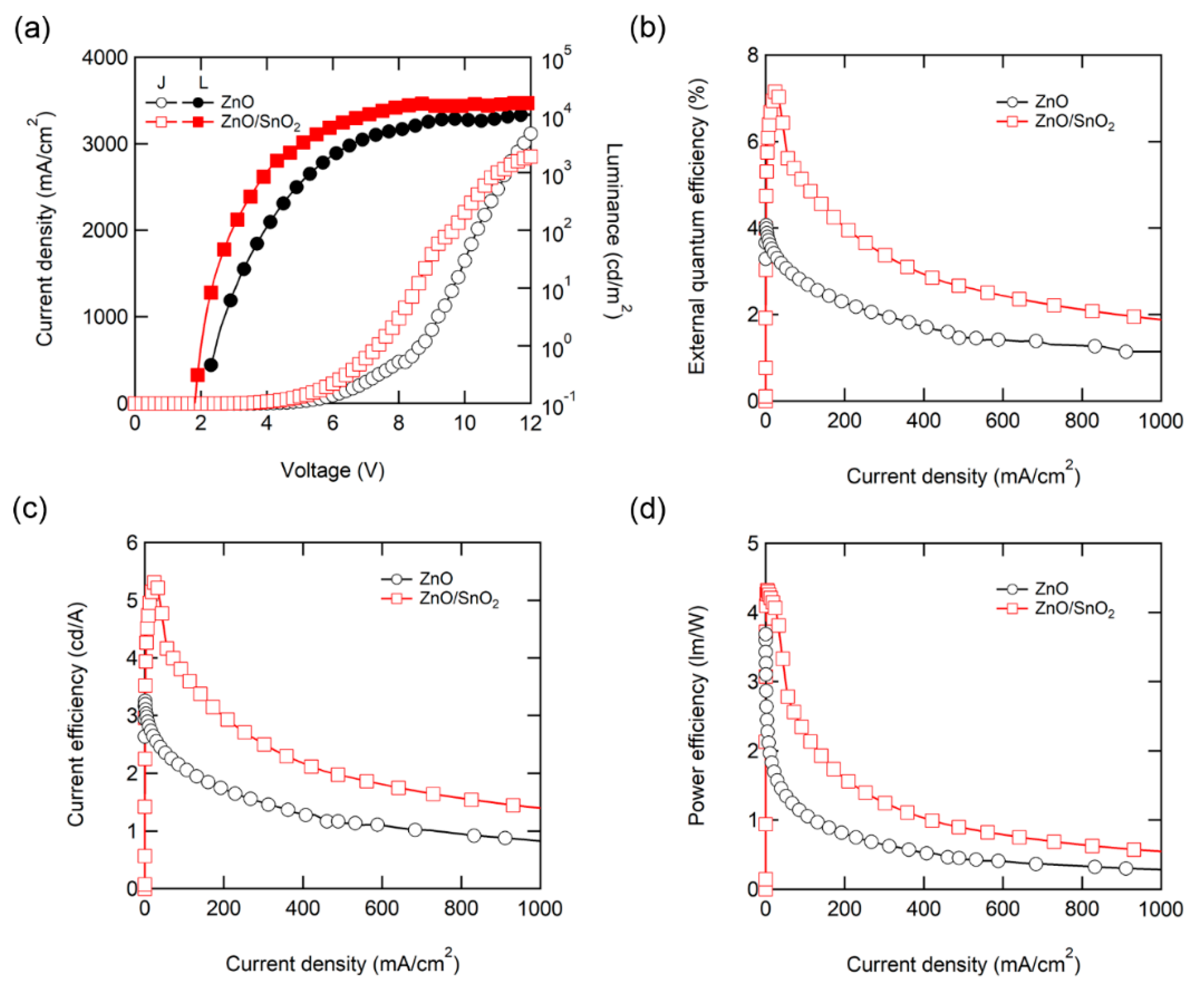