Ionic liquids (ILs) have demonstrated great potential for applications in catalysis [1,2,3], separation [4,5], as electrolyte [6], and in sensors [7]. This is due to their extraordinary properties such as high chemical and thermal stability, high ion conductivity, affinity to inorganic compounds, and wide electrochemical stability windows. One key advantage of ILs is that the IL cations and anions can be adapted to provide an IL with specific properties and hence functionalities [8,9,10,11]. Immobilization of free ILs in a solid matrix generates macroscopic solids commonly termed ionogels (IGs). IGs combine the properties of the IL and the host matrix [12,13] and have been put forward for the development of macroscopic solid materials where such a combination of IL properties [14,15] (e.g., ionic conductivity [16] or thermal stability) and properties of a host (e.g., transparency [17,18] or mechanical stability [19]) provides new fields of application. As of now, IGs have been considered for use as solid electrolytes [20,21], solid actuators [22,23], and heterogeneous catalysts [24,25]. These applications often rely on good mechanical strength while maintaining high chemical stability and ionic conductivity. Therefore, new multifunctional IGs combining the above features are highly sought after [26,27].
Chemical and structural design of a solid matrix is crucial to tune the physical properties and chemical functions of IGs [14]. To date, numerous solid scaffolds have been used for IG fabrication. Typical examples include inorganic oxides and organic polymers, especially silica and poly(methyl methacrylate) (PMMA) [28,29,30]. With solvent-casting, a series of soft, magnetic, and luminescent IGs can be fabricated using PMMA as a host [31]. Here, ILs often lead to plasticization that reduces the glass transition temperature of IGs [32]. Moreover, polymer-based IGs often suffer from structural degradation, depolymerization, or leaching when exposed to polar solvents. This severely reduces their use in applications where there is a direct contact with liquid phases.
In contrast, IGs derived from inorganic oxides have better chemical stability [33] and higher ionic conductivity [34] when compared with polymer-based IGs. For example, silica-based IGs can exhibit a tunable phase behavior of ILs [35] and have ionic conductivities as high as 10−4 S cm−1. However, these IGs are brittle and only have a low mechanical strength. This currently prevents their application in the nascent field of flexible matters [36].
To overcome the issues of both polymer- and inorganic-based IGs, it has recently been proposed that the addition of inorganic nanoparticles to polymer-based IGs may improve the mechanical properties of the material [37,38,39]. However, the quality of an IG made by this method strongly depends on the properties of inorganic components [40] such as particle size. Moreover, the properties are further affected by processes happening during the IG synthesis, for example phase separation or particle aggregation [31].
As a result, there is a tremendous need for a chemically, electrochemically, and thermally robust IG host material combining the advantages of polymeric and inorganic host materials to afford a true next generation of IGs for application in modern technology. The current article addresses this question. The new IG introduced here exhibits high mechanical strength and high ionic conductivity. Its synthesis is simple and straightforward and is based on confining the IL 1-butyl-3-methylimidazolium bis(trifluoromethane sulfonyl)imide, [Bmim][NTf2] within a new organic–inorganic hybrid host. The organic–inorganic network is obtained by polymerization/condensation of methyltrimethoxysilane (MTMS), tetraethoxysilane (TEOS), and methyl methacrylate (MMA), which provides good mechanical strength and rapid shape recovery characteristics to the final IG. A silane coupling agent KH-570 (3-methacryloxypropyltrimethoxysilane) is used to tightly connect the inorganic and the polymeric components (SiO2 and PMMA, respectively) providing the intimate contact between the components and thus excellent mechanical properties to the matrix. IL addition leads to robust but flexible IGs, which can be deformed by an external force and quickly return to the original shape after the external force is removed. The IG exhibits a high ionic conductivity over a range of temperatures and thus is envisioned as a promising solid electrolyte in electronic devices. Finally, luminescent organisilica-containing carbon dots (CDs) can be homogeneously distributed in the IG to yield transparent, flexible, ion conducting, and blue light emitting monolithic materials.

Materials. MMA (99%), TEOS (99%), MTMS (99%), citric acid (99%+), KH-570 (3-methacryloxypropyltrimethoxysilane, 98%), and 3-(2-Aminoethylamino) propyl) trimethoxysilane (AEAPTMS, 99%) were obtained from Adamas Co., Ltd. (Shanghai, China). Azobisisobutyronitrile (AIBN) was procured from Energy Chemical Co., Shangai, China. [Bmim][NTf2] was purchased from Lanzhou Yulu Fine Chemical Co., Ltd., Lanzhou, China. Glucose was supplied by Xilong Scientific Co., Ltd., Shangtou, China. EtOH (analytical purity) was obtained from Sinpharm chemical reagent Co., Ltd., Ningbo, China. All chemicals were used as received.
CD synthesis. Citric acid and AEAPTMS, (mass ratio = 1:20) were mixed in a Teflon reactor under stirring at room temperature for 0.5 h. The resulting solution was heated to 180 °C for 12 h to obtain a yellow uniform liquid. The liquid was extracted with n-hexane to remove unreacted substances. Finally, the residual liquid was removed by rotary evaporation at 60 °C to obtain a gelatinous yellow powder.
IG synthesis. A certain amount (2 mg) of CDs were mixed with TEOS (2.08 g, 0.01 mol) and MTMS (1.36 g, 0.01 mol) in a mixed solvent of ethanol and water (ethanol/water ratio = 1) under stirring for 10 h at room temperature to obtain a uniform liquid. Then, MMA (4 g, 0.04 mol) and KH-570 (0.62 g, 0.0025 mol) were added to the above solution, and the temperature was increased to 65 °C for 40 min using an oil bath. After that, 8 mg AIBN and [Bmim][NTf2] (0.5 g) were added to the solution, and the reaction mixture was kept at 60 °C for 24 h. Once the gel solidified, the organic–inorganic luminescent IGs were collected.
Characterization. X-ray diffraction was done on a Rigaku Ultima IV (Rigaku, Japan) with a scanning angle range (2θ) from 7° to 85°, with a scan speed of 5°/min. Attenuated total reflection infrared spectroscopy was done on a ThermoFisher iS50 (Thermo Fisher Scientific, Waltham, MA, USA) from 500 to 4000 cm−1. TGA and differential scanning calorimetry experiments were done on a TA Instruments SDT Q600 TGA (TA Instruments, New Castle, Delaware, USA) from room temperature to 800 °C in air with a heating rate of 10 °C min−1. A steady-state transient fluorescence spectrometer (FLS-920, Edinburgh, UK) was used for analyzing the fluorescence absorption and emission phenomena of IGs. Ionic conductivities were measured using a Solartron SI-1260 (Solartron, Zurich, Switzerland) between 25 and 100 °C and frequencies from 10 to 106 Hz. Field-emission transmission electron microscopy images were obtained on a Talos F200S TEM/STEM (Thermo Fisher Scientific, Waltham, MA, USA) with a S-FEG Schottky gun operated at 200 kV. The sample was dispersed with ethanol under sonication for 1 min and then dipped on a Cu grid for TEM operation.

A novel organic–inorganic hybrid matrix for advanced IGs has been reported. The major advance over existing IGs is the fact that the combination of sol-gel chemistry with radical polymerization leads to robust, yet flexible, IGs with adjustable mechanical properties, depending on the precursor ratios. Moreover, the resulting materials were multifunctional soft hybrids combining advantageous mechanical properties with interesting optical and electrical properties. Of particular interest, the silane coupling agent 3-methacryloxypropyltrimethoxysilane acted as a bifunctional crosslinker tightly connecting the polymer network with the silica network, providing access to homogeneous materials with tunable properties. Overall, IGs with higher organic content show higher compression strain and tensile strain. The IL [Bmim][NTf2] immobilized within the flexible gel provided the material with an ionic conductivity as high as ca. 0.04 S cm−1 at 50 °C. This indicated that the idea of an organic–inorganic hybrid is a powerful strategy to improve the mechanical and electrical properties of soft matter. Overall, the materials introduced here are prototypes for the development of the next generation of multifunctional IGs with broad application potential.

L.T., Z.X., and A.T. designed the experiments. L.T., Q.-H.W. and D.W. prepared the samples. Y.L. conducted the TEM characterization and collected the TG data. Z.X. and A.T. supervised the project. L.T. and Z.X. wrote the manuscript. A.T. edited and revised the manuscript and discussed the data. All authors have read and agreed to the published version of the manuscript. 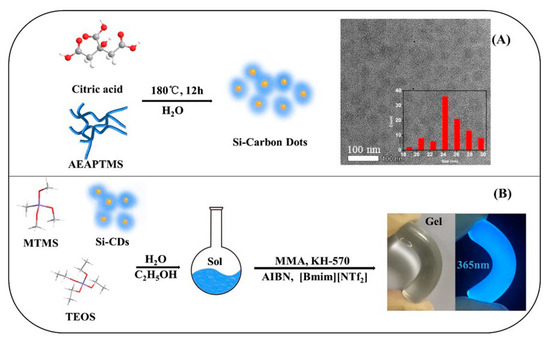 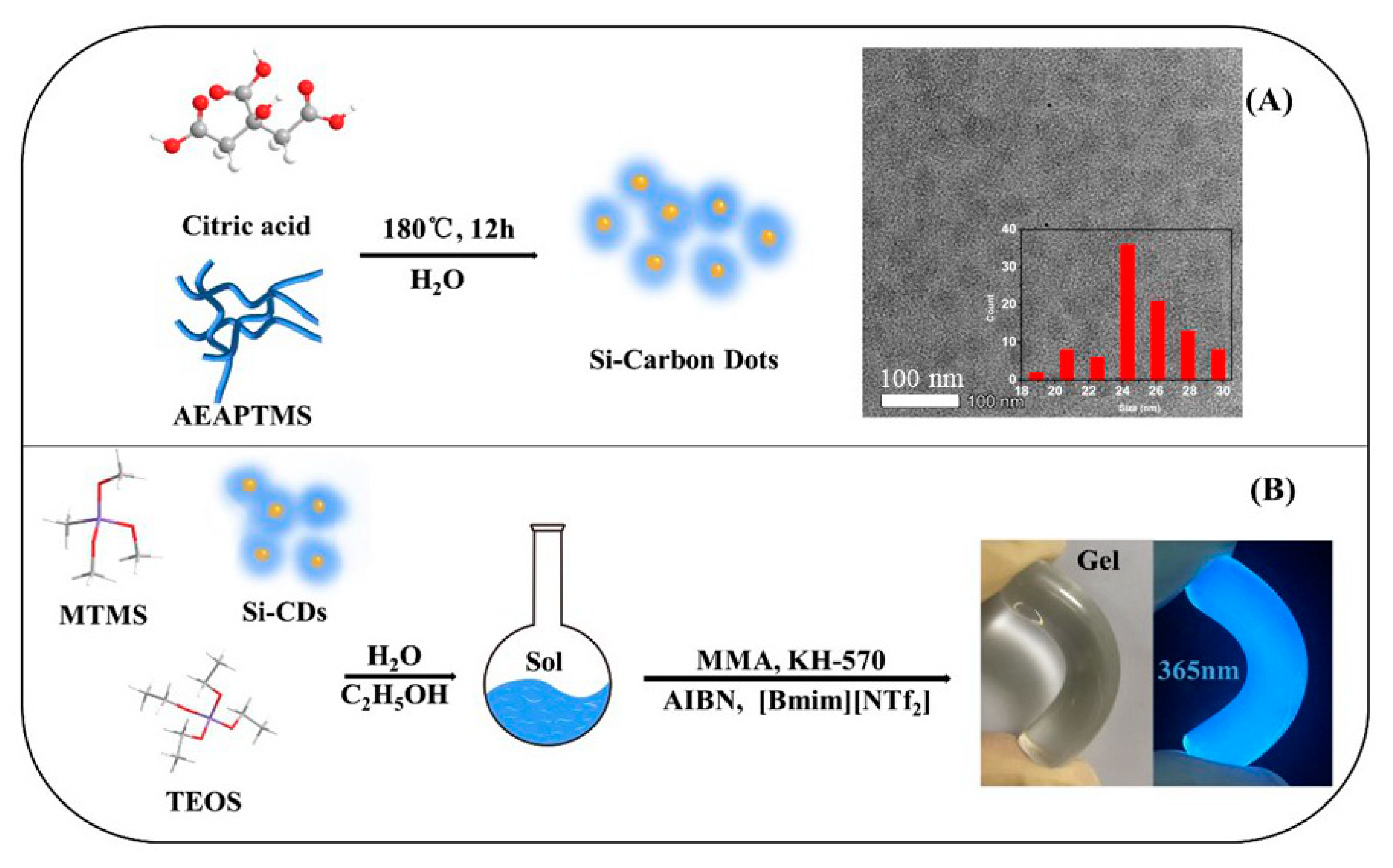 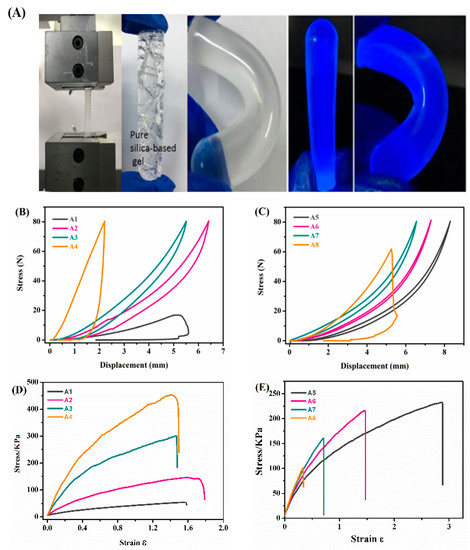 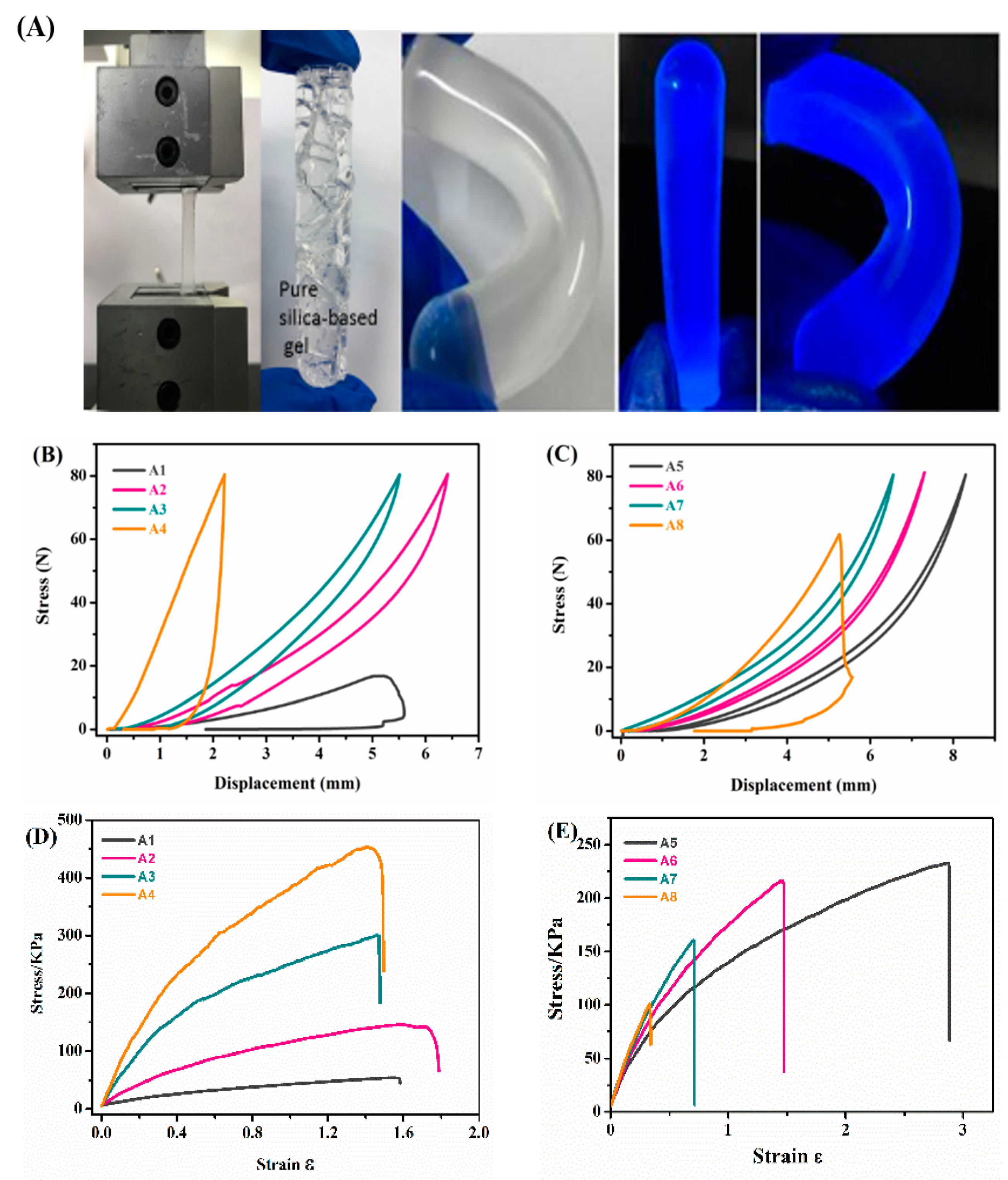