Superficial Characteristics of Titanium after Treatment of Chorreated Surface, Passive Acid, and Decontamination with Argon Plasma
Previous Article in Journal

Blood analogues have long been a topic of interest in biofluid mechanics due to the safety and ethical issues involved in the collection and handling of blood samples. Although the current blood analogue fluids can adequately mimic the rheological properties of blood from a macroscopic point of view, at the microscopic level blood analogues need further development and improvement. In this work, an innovative blood analogue containing giant unilamellar vesicles (GUVs) was developed to mimic the flow behavior of red blood cells (RBCs). A natural lipid mixture, soybean lecithin, was used for the GUVs preparation, and three different lipid concentrations were tested (1 × 10−3 M, 2 × 10−3 M and 4 × 10−3 M). GUV solutions were prepared by thin film hydration with a buffer, followed by extrusion. It was found that GUVs present diameters between 5 and 7 µm which are close to the size of human RBCs. Experimental flow studies of three different GUV solutions were performed in a hyperbolic-shaped microchannel in order to measure the GUVs deformability when subjected to a homogeneous extensional flow. The result of the deformation index (DI) of the GUVs was about 0.5, which is in good agreement with the human RBC’s DI. Hence, the GUVs developed in this study are a promising way to mimic the mechanical properties of the RBCs and to further develop particulate blood analogues with flow properties closer to those of real blood. View Full-Text
Keywords: blood analogues; giant unilamellar vesicles; deformation index; in vitro blood; biomimetic; microcirculation blood analogues; giant unilamellar vesicles; deformation index; in vitro blood; biomimetic; microcirculation
►▼ Show Figures 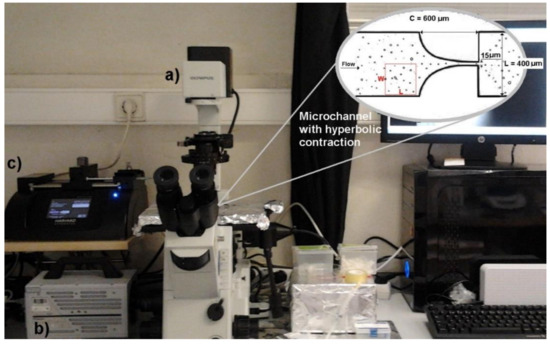