Preliminary Investigation of the Dissolution Behavior, Cytocompatibility, Effects of Fibrinogen Conformation and Platelet Adhesion for Radiopaque Embolic Particles
Next Article in Special Issue

Keeping an Eye on Decellularized Corneas: A Review of Methods, Characterization and Applications
Previous Article in Journal

While fibroin isolated from the cocoons of domesticated silkworm Bombyx mori supports growth of human corneal limbal epithelial (HLE) cells, the mechanism of cell attachment remains unclear. In the present study we sought to enhance the attachment of HLE cells to membranes of Bombyx mori silk fibroin (BMSF) through surface functionalization with an arginine-glycine-aspartic acid (RGD)-containing peptide. Moreover, we have examined the response of HLE cells to BMSF when blended with the fibroin produced by a wild silkworm, Antheraea pernyi, which is known to contain RGD sequences within its primary structure. A procedure to isolate A. pernyi silk fibroin (APSF) from the cocoons was established, and blends of the two fibroins were prepared at five different BMSF/APSF ratios. In another experiment, BMSF surface was modified by binding chemically the GRGDSPC peptide using a water-soluble carbodiimide. Primary HLE were grown in the absence of serum on membranes made of BMSF, APSF, and their blends, as well as on RGD-modified BMSF. There was no statistically significant enhancing effect on the cell attachment due to the RGD presence. This suggests that the adhesion through RGD ligands may have a complex mechanism, and the investigated strategies are of limited value unless the factors contributing to this mechanism become better known. View Full-Text
Keywords: silk fibroin; corneal limbal epithelial cells; RGD peptide; fibroin blends; cell adhesion silk fibroin; corneal limbal epithelial cells; RGD peptide; fibroin blends; cell adhesion
►▼ Show Figures 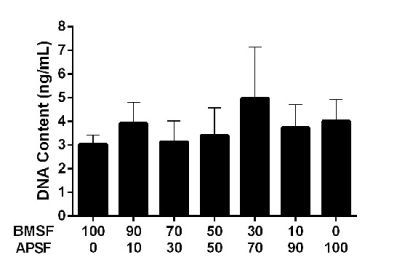