2.1. Model of Geometry and Material

Static contact analysis of the hip prosthesis system was conducted to generate stresses and deflection on the surface of the cement mantle. The finite element analysis software ABAQUS 6.12, was selected to analyze this case [14]. The cement mantle hip joint model consisted of bone, cement, liner, and head (ball) as depicted in Figure 1a. The ball is connected to the stem. The arrangement of the ball, liner, cement mantle, and bone is detailed in Figure 1b in the cross–sectional view. Due to the spherical geometry, an axisymmetrical model was employed for simulating the contact of the hip prosthesis system, see Figure 2. The geometric model of the contact system of a hip prosthesis with the added layer consists of bone, cement, the added layer, liner, and ball. The bone has a diameter of 60.2 mm and the ball has a diameter of 28 mm. The thickness of cement mantle used by Gun et al. [15] was adopted for calculating contact parameters in this study.
Table 1 summarizes the material properties from literature that were used for the components of the hip prosthesis simulation. According to Anderson et al. [16], Sahli et al. [17], and Ouinas et al. [18], cortical bone has a modulus of elasticity of 17,000 MPa and Poisson’s ratio of 0.3. The cement mantle of polymethyl methacrylate (PMMA) has a modulus of elasticity ranging from 2000 to 2300 MPa and Poisson’s ratio of 0.3 according to [17,18], and Achour et al. [19]. The ultra–high–molecular–weight polyethylene (UHMWPE) liner as used by [18,19], and Eichmiller et al. [20], has an elasticity modulus of 690 to 945 MPa and Poisson’s ratio of 0.45. The ball was 316 L stainless steel as used by Yildiz et al. [21], with a modulus of elasticity of 193,000 MPa and Poisson’s ratio of 0.3. In this simulation, the material properties of the addition layer varied cobalt chrome (CoCr), low module titanium beta alloy (Ti-35Nb-7Zr-5Ta), and titanium alloy (Ti-6AI-4V), as shown in Table 1. The moduli of elasticity of CoCr, Ti-35Nb-7Zr-5Ta, and Ti-6AI-4V are 230,000 MPa, 113,800 MPa, and 110,000 MPa, respectively [22,23].

Figure 3a shows the applied load and mesh in the hip prosthesis model. A static force of 3000 N was applied to the center of the ball following the model of Bergmann et al. [24] for hip contact forces under routine activities. The symmetrical boundary conditions were applied so that a quarter of the ball was produced. The model of the bone was attached to the outer surface. Contact occurs only between the liner’s inner surface and the ball surface. A bilinear axisymmetric structure of four quadrilateral nodes, reduced integration, and an hourglass control (CAX4R) mesh were employed for simulating the proposed contact model. The number of elements and nodes were about 8000.
The contact stress or contact pressure, von Mises stress, and deflection were observed. The contact stress was calculated to explore the distribution of stress on the area of the cement mantle surface. The von Mises failure criterion was applied for investigating the stresses along the thickness of the cement mantle. Deflection analysis was also performed to study the effect of a new layer on the stiffness of the cement mantle system. The location of the data collection is shown in Figure 3b. Data was taken from the retrieval line set for each node.

We gratefully acknowledge Directorate of Research and Community Service of Ministry of Research, Technology, and Higher Education for funding this research with the grant No. 101-139/UN7.P4.3/PP/2019. 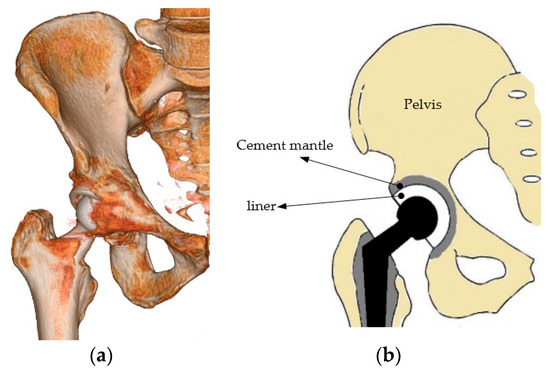 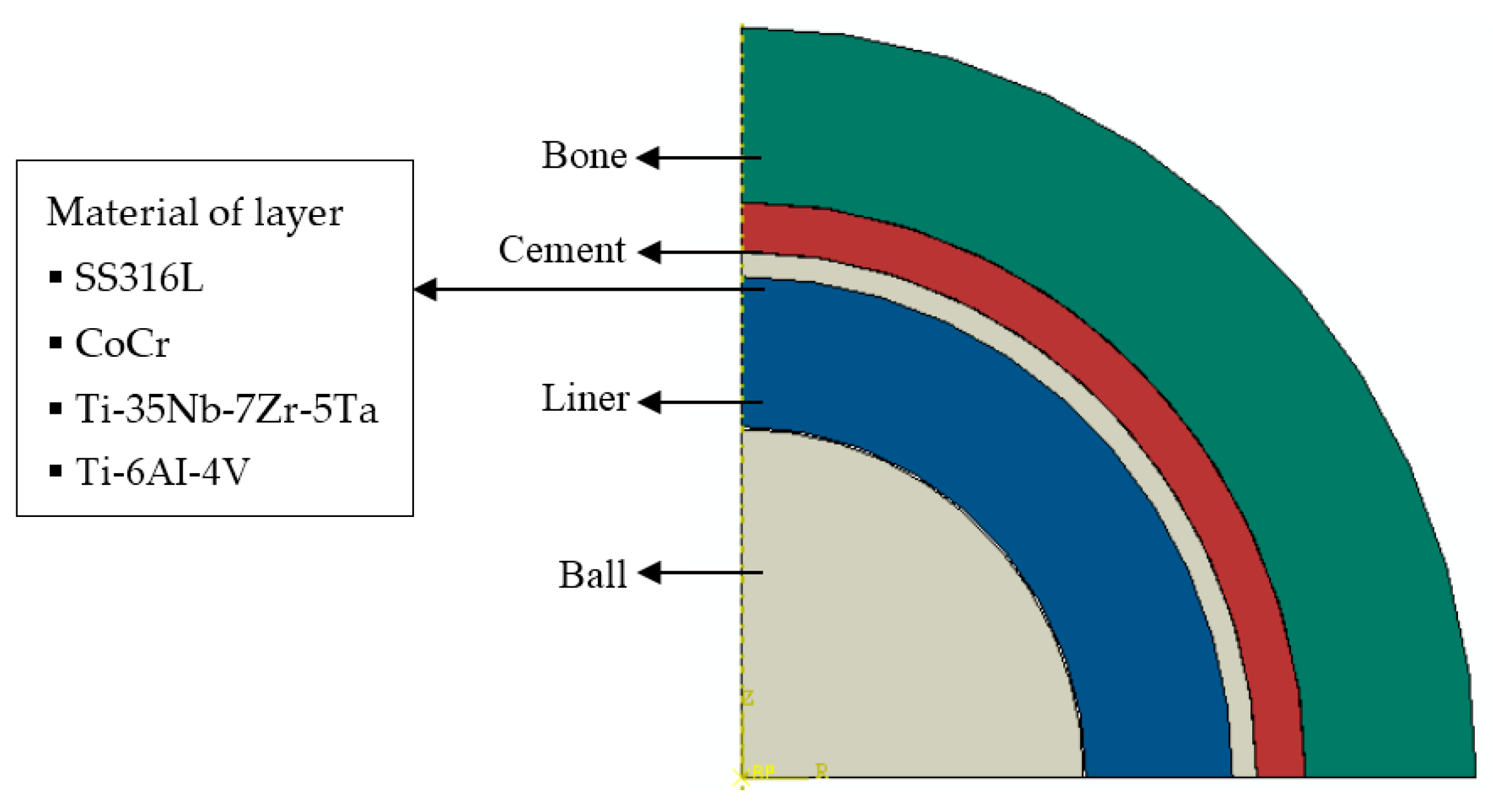 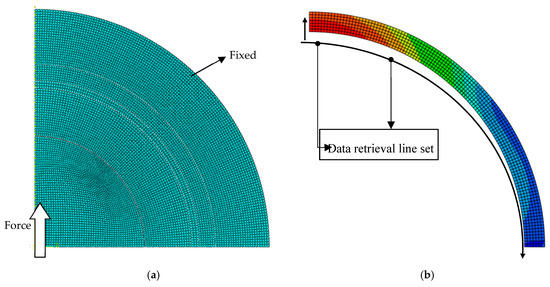 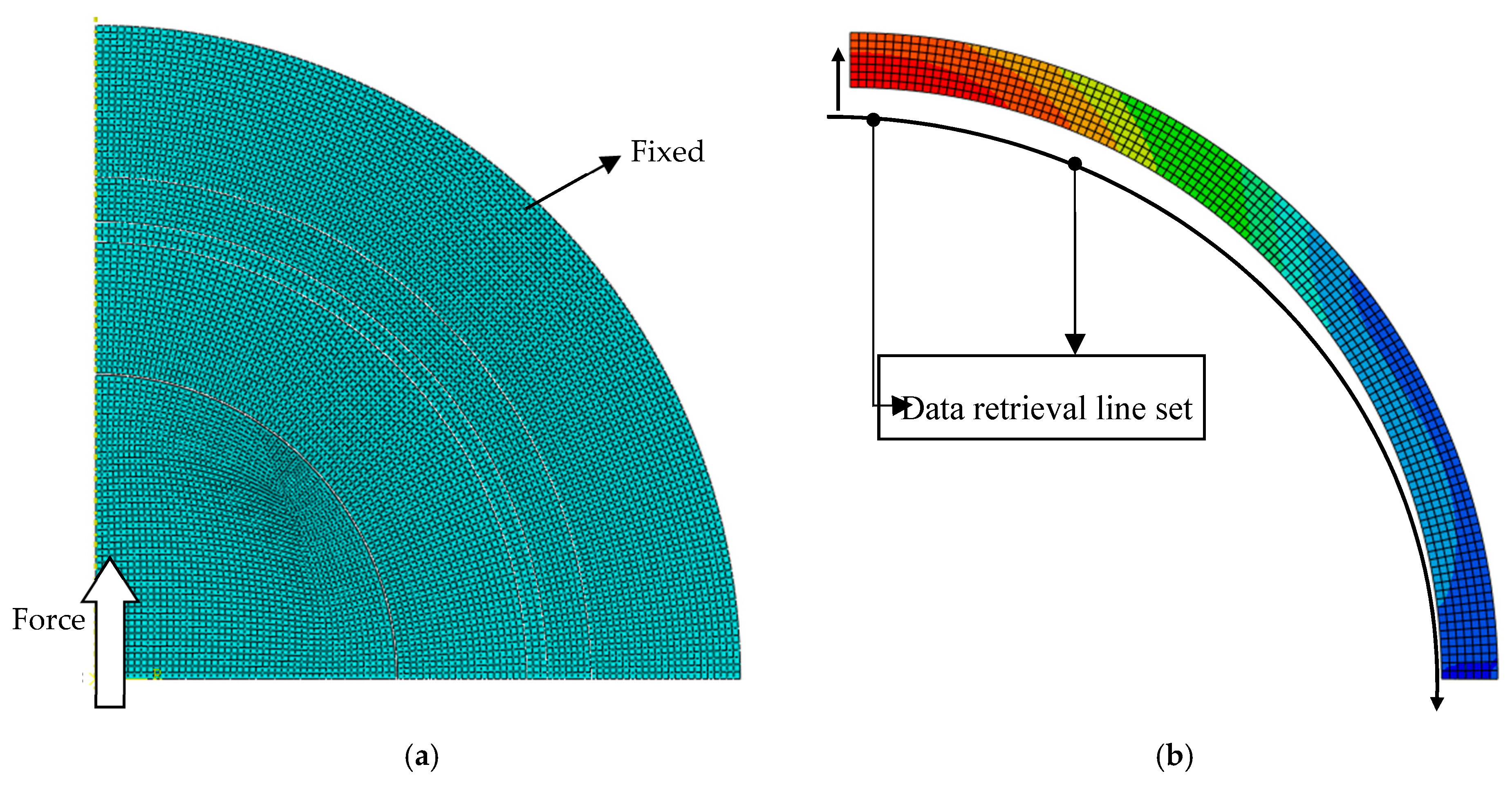 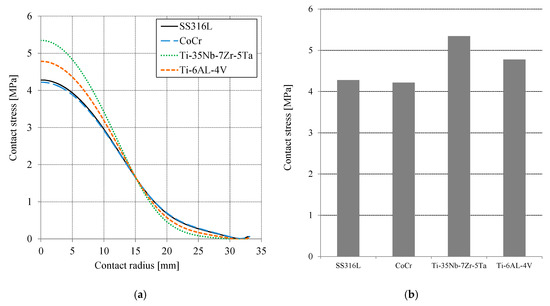 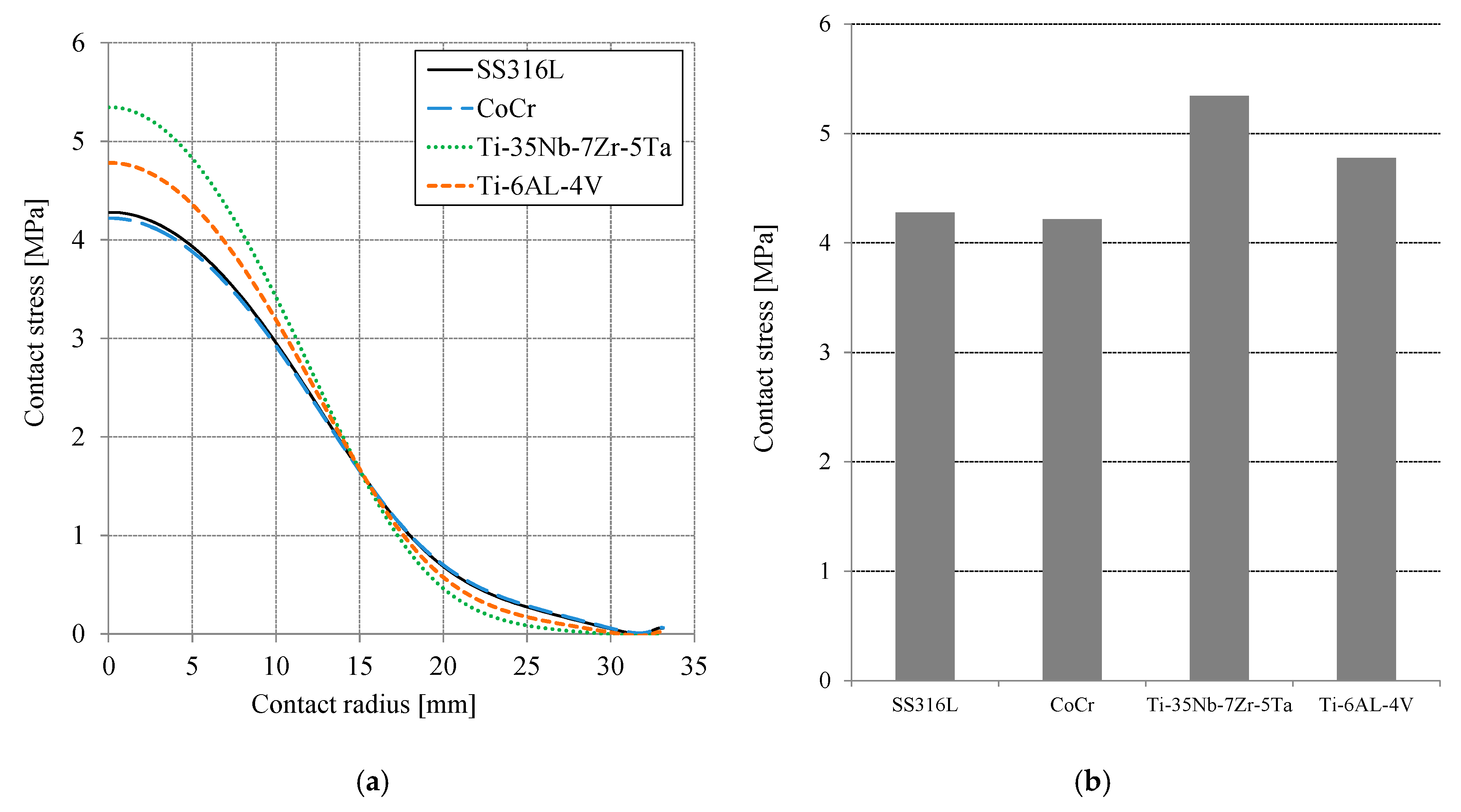 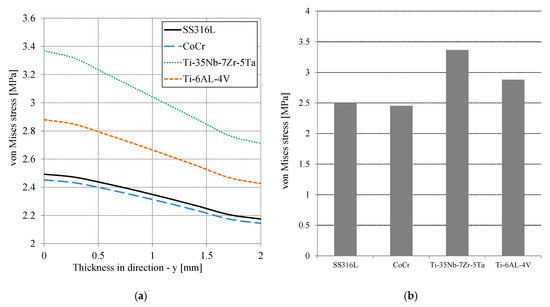 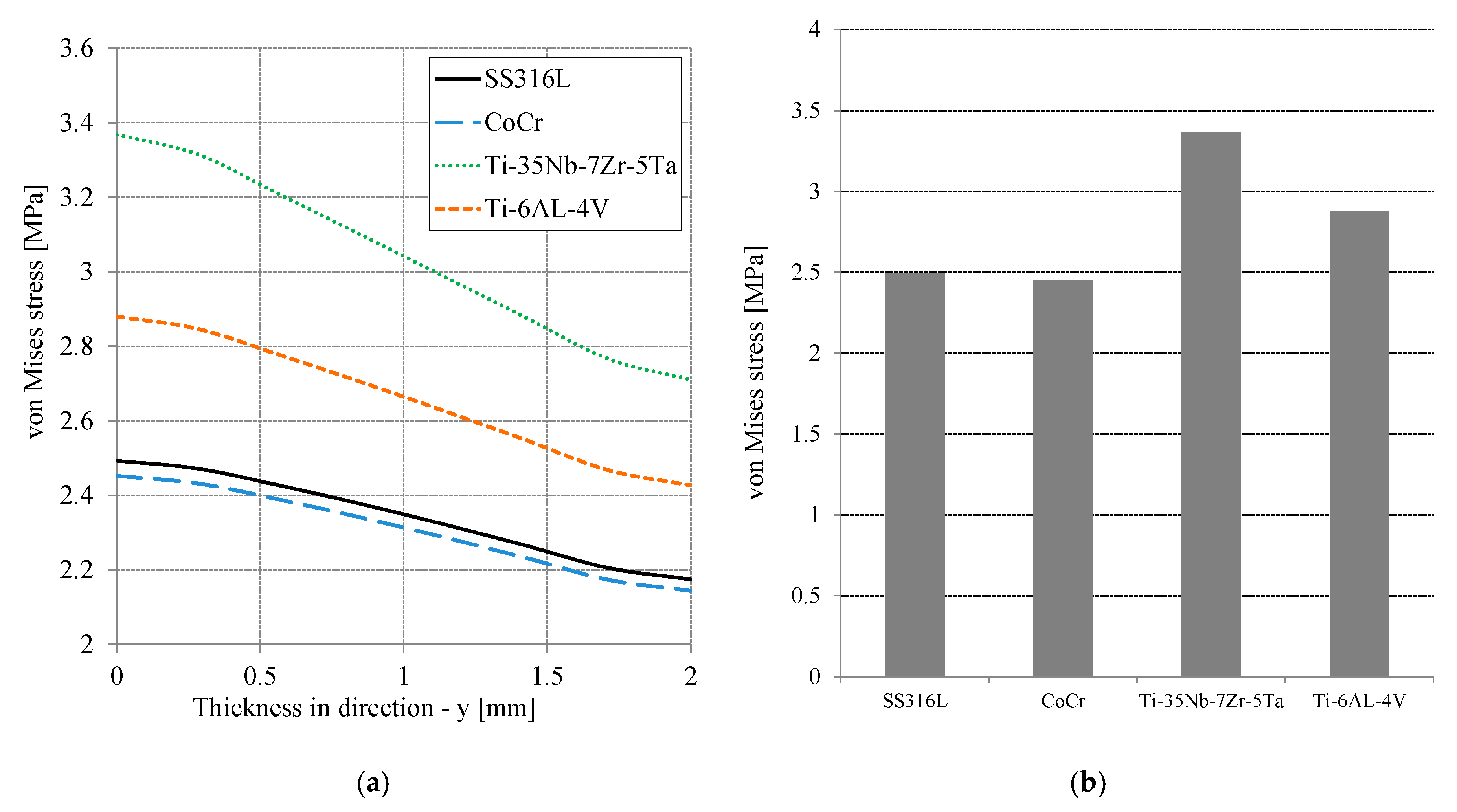 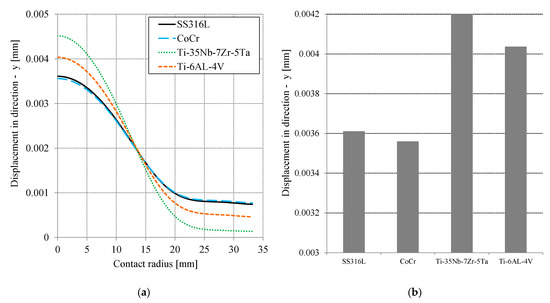 Table 1. Mechanical properties of the material used.
Table 1. Mechanical properties of the material used.
© 2019 by the authors. Licensee MDPI, Basel, Switzerland. This article is an open access article distributed under the terms and conditions of the Creative Commons Attribution (CC BY) license (http://creativecommons.org/licenses/by/4.0/).
We use cookies on our website to ensure you get the best experience. Read more about our cookies here.
Accept
We have just recently launched a new version of our website. Help us to further improve by taking part in this short 5 minute survey here. here.
Never show this again