Previous research has shown an inverse relation between response times in elementary cognitive tasks and intelligence, but findings are inconsistent as to which is the most informative score. We conducted a study (N = 200) using a battery of elementary cognitive tasks, working memory capacity (WMC) paradigms, and a test of fluid intelligence (gf). Frequently used candidate scores and model parameters derived from the response time (RT) distribution were tested. Results confirmed a clear correlation of mean RT with WMC and to a lesser degree with gf. Highly comparable correlations were obtained for alternative location measures with or without extreme value treatment. Moderate correlations were found as well for scores of RT variability, but they were not as strong as for mean RT. Additionally, there was a trend towards higher correlations for slow RT bands, as compared to faster RT bands. Clearer evidence was obtained in an ex-Gaussian decomposition of the response times: the exponential component was selectively related to WMC and gf in easy tasks, while mean response time was additionally predictive in the most complex tasks. The diffusion model parsimoniously accounted for these effects in terms of individual differences in drift rate. Finally, correlations of model parameters as trait-like dispositions were investigated across different tasks, by correlating parameters of the diffusion and the ex-Gaussian model with conventional RT and accuracy scores. View Full-Text
Keywords: mental speed; working memory capacity; intelligence; response time modeling; ex-Gaussian model; diffusion model mental speed; working memory capacity; intelligence; response time modeling; ex-Gaussian model; diffusion model
►▼ Show Figures 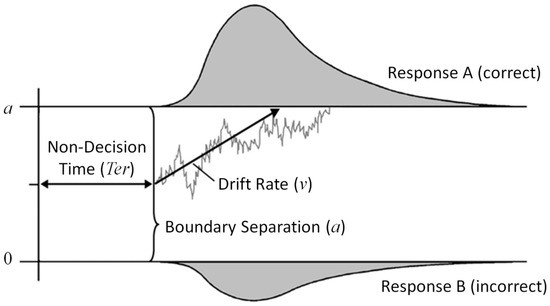