An Order-Theoretic Quantification of Contextuality
Previous Article in Journal

The Logic of the Physics of Information

:
Biological systems represent a unique class of physical systems in how they process and manage information. This suggests that changes in the flow and distribution of information played a prominent role in the origin of life. Here I review and expand on an emerging conceptual framework suggesting that the origin of life may be identified as a transition in causal structure and information flow, and detail some of the implications for understanding the early stages chemical evolution.
Keywords:
origin of life; emergence; top-down causation

Living systems are the congruence of two core functions: metabolism (reproduction) and genetic inheritance (replication). This has led many researchers to assign prominence to the appearance of one or the other as the crucial first step leading to the emergence of life. Thus, origin of life research has traditionally been divided into the respective frameworks of “metabolism-first” and “genetics-first” scenarios. For the former, emphasis is placed on the importance of energy flows through material substrates required to sustain living matter, while for the latter emphasis is placed on the propagation of genetic information. More succinctly, metabolism-first approaches are cast in term of physics (e.g., matter, energy, forces), and genetics-first cast in terms of the copying of information. These physical and informational perspectives are traditionally treated as two parallel, but distinct, narratives for describing living systems. A challenge in unifying these approaches is that the concept of information—which relies on the existence of counterfactuals—is not easily reconciled with describing physical systems, whose dynamics are typically described by an initial state and deterministic laws. The counterfactual nature of information is evident when one considers that for a message to carry information, a different message must also be possible. Deterministic laws only allow one outcome for a given initial state and therefore do not allow more than one possibility. Thus, as physics is traditionally cast, there appears to be no room for information to physically influence the world. However, we know information does affect the world: information is physical, it must both be physically instantiated and—perhaps most importantly—it can influence the dynamics of physical systems [1]. The latter is particularly important in the context of understanding the nature of life: living systems do not merely passively accumulate and store information, they also actively processes it [2,3]. Many of the most fundamental biochemical processes involve the transfer and processing of information [4]: DNA sequences provide a set of algorithmic instructions for the execution of specific chemical processes within cells (in addition to their role as a digital information storage repository) [5]; protein-based “circuits” determine the behavior of cells [6]; gene regulation is tightly controlled by a variety of feedback mechanisms, including switch-like behavior [7]; and even metabolism has an underlying logic [8,9]. Accommodating the active—or causal—role of information within physical theory is one of the great challenges associated with explaining life’s origins.
The causal role of information is often discussed under the conceptual framework of “top-down” causation, where higher levels of organization in structural hierarchies constrain the dynamics of lower levels of organization [10]. An example is how information encoded in the spatiotemporal patterning of electromagnetic fields dictates the patterns of a developing embryo by influencing local gene expression [11]. Top-down causation by information encoded in the current state is one of the most distinctive features of living physical systems [12,13,14]. In light of this, we previously suggested that the emergence of life may be associated with a transition in the causal and informational architecture of matter [15,16]. Within this proposed framework, the debate between genetics-first and metabolism-first scenarios takes on a new dimension: both may be unified under a common information-based descriptive paradigm, where genetics may be thought of in terms of digital information processing and metabolism roughly as a form of analog information processing [16]. Thus the debate on which came first—genetics or metabolism—may be recast as a debate about the informational hardware of the first living systems. A complimentary perspective to this hardware-based view must focus on the “software”, i.e., the way information is managed in nascent living systems [17]. From the perspective of information flow and processing, genetics and metabolism are two core sub-functions of a common cellular operating system (COS) [14]. It is the emergence of the COS system that is the critical question to be addressed when asking how life first emerged. Cast in this light, the emergence of life is a question for physics: specifically, it is a question of how information acquires a causally efficacious role in physical systems. Here I review insights into the potential physics underlying the emergence of life based on this perspective, which suggest that the transition from non-life to life may be identified as a transition in causation and information flow. I also detail some of the implications of this approach for our understanding of the early stages chemical evolution.

2. The Limits of Chemistry

The forgoing discussion suggests that life first arose through the emergence of virtual constructors in chemical systems. The emergence of virtual constructors is intimately tied to the notion of causal emergence as it requires the appearance of new “higher-level” causes that are necessarily abstract (e.g., implemented through the use of symbolic logic and programs). Identifying when such systems emerge therefore requires rigorous quantification of the physics underlying causal emergence, and in particular “top-down” causation. We first discuss top-down causation as a conceptual framework for understanding living matter, and then turn to how quantifying causal emergence could provide new insights into how life first emerged.
In living systems, causal influences run both up and down organizational hierarchies [10] (see e.g., Figure 1). Characterizing living processes therefore requires both bottom-up causation—such as when a gene is read-out to make a protein that affects cellular behavior—and top-down causation—as occurs when changes in the environment initiate an organismal response that permeates all the way down to the level of individual genes [5]. Bottom-up causation is the status quo in modern physics, whereas top-down causation is less familiar and much more challenging to quantify. Top-down (or downward) causation occurs when a higher hierarchical level exerts causal influence over a lower level by setting a context (for example, by changing some physical constraints) within which the lower level actions take place [31,32]. A relatively simple example of top-down causation is the three-dimensional folding of an RNA molecule. The global constraint imposed by the network of structural interactions between residues causes the molecule to acquire a specific three-dimensional conformation [13]. RNA (or protein) folding therefore presents an example of whole-part causation, albeit localized to a single contiguous molecule. 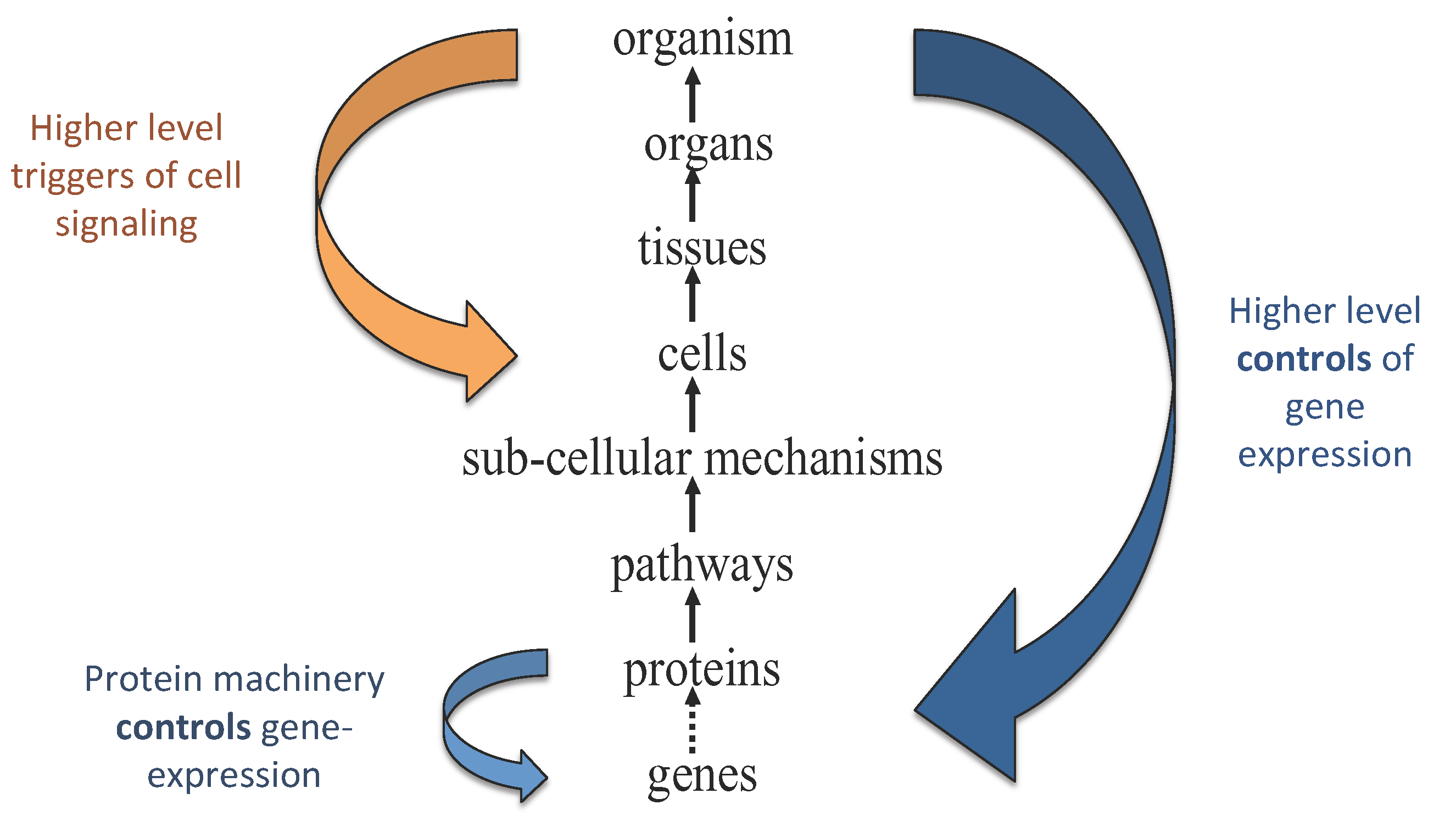 4. The Emergence of Life as a Transition in Informational and Causal Architecture

In this review, we have identified life as a unique state of matter distinguishable from other physical states by its causal architecture. Under this view, the transition from non-living to living matter roughly maps to the transition from trivial to non-trivial replication and should therefore correspond to decoupling of “software” (information controlling the dynamics of the chemical system) and “hardware” (the chemical substrate). While we typically associate this decoupling with the origin of translation, more broadly it should also encompass those transitions in the complexity of chemical systems that would have separated information storage from processing, and enabled the emergence of new layers of control architectures (feedback from state to dynamics or top-down causation from “software” to “hardware”). Transitions in causal architecture could have occurred through a series of “information takeover” events, which differ from the notion of “genetic takeover” in that they are not necessarily confined to the transfer of genetic information from one molecular species to another. Instead, information takeover refers to transitions in chemical complexity whereby advances in information processing and computation would have conferred nascent life with the logical architecture necessary to gain control over the chemical substrates in which it was instantiated. These transitions will likely be difficult to identify, however one key feature should be that the (informational) states of a nascent living systems played an increasingly prominent role in determining the future dynamics. This suggests that the processes leading to the emergence of life should be marked by a series of “information take-over” events corresponding to changes in causal architecture and information flow, which, in principle, is measureable.
An interesting facet of this perspective is that it characterizes life as logically and organizationally distinct from other kinds of dynamical systems, and thus life represents a novel, emergent state of matter. Our usual causal narrative, consisting of the bottom-up action of material entities only, could therefore be only a subset of a broader class of phenomena—including life—that admit immaterial causes through the action of virtual constructors. This viewpoint suggests new thinking as to how life might have arisen on lifeless planet, by shifting emphasis to the origins of computation, control and informational architecture, rather than focusing solely on the onset of Darwinian evolution for example, which does not rigorously define how or when life emerges in a physical system. This framework also permits a more universal view of life, where the same underlying principles would permit understanding of living systems instantiated in different substrates (either artificial or in alternative chemistries) anywhere in the universe.

The author thanks Paul C.W. Davies, George F.R. Ellis, Chiara Marletto and the [email protected] group for fruitful conversations. This publication was made possible through the support of a grant from the Templeton World Charity Foundation. The opinions expressed in this publication are those of the author and do not necessarily reflect the views of Templeton World Charity Foundation.

© 2014 by the author; licensee MDPI, Basel, Switzerland. This article is an open access article distributed under the terms and conditions of the Creative Commons Attribution license (http://creativecommons.org/licenses/by/3.0/).