The detailed schematic diagram of throttle valve system is illustrated in Figure 2.
Applying Kirchhoff’s voltage law around armature circuit, one can get the equation where, is the armature resistance, is armature inductance, is the drive gain, is applied voltage, is the current passing through the motor winding, is the back e.m.f voltage which is expressed by where, is the back e.m.f constant and is the shaft angular position of motor. Using Equation (1), one can have
It has been shown that the coil inductance has no effect on the dynamic response and it can be neglected [1,12]. As such Equation (3) can be written as;
The developed torque of DC motor is given as where, is motor torque constant. The generated torque is used to compensate the motor shaft motion, the load torque , viscosity and friction damping: where, and denotes the viscosity damping and static friction coefficients of motor shaft, respectively, is the motor shaft inertia.
On the other part of gear, the transmitted toque tries to overcome the throttle plate motion, spring torque, viscosity damping and static friction of throttle valve; where, and represents the viscosity damping and static friction coefficients of the throttle, respectively, is the torque due to airflow, is the throttle inertia and is the return spring torque defined by [23] where, is the elastic coefficient of the spring, is throttle angle of throttle plate.
Using the gear ratio , Equations (3)–(7) can be combined to give
The airflow torque which has no significant effect on the behavior of electronic throttle and hence it can be treated as unknown external disturbance.
If one set , and , then the state variable representation can be written as where,
In matrix form Equation (9) becomes

If it is assumed that the uncertainty is known, the following analysis is followed. Let represents the error between the actual state and the desired trajectory described by [5]:
The time derivative of above equation gives
Defining the error as follows;
Equations (12) and (13) gives
Using,
Equation (4) becomes
Taking the time derivative of Equation (13) gives
The control action can be chosen as
Substituting Equation (18) into Equation (17) to obtain
Using Equation (15), one can obtain the expression for , and substituting it into Equation (18), the control law becomes
To investigate the stability, the following Lyapunov candidate is chosen
The derivative of Lyapunov function gives
Therefore, one can conclude that the control law described by Equation (21) leads to an asymptotically stable system.

If the uncertainty is assumed to be bounded and unknown, then by employing the certainty equivalence principle the actual value of uncertainty is replaced by its estimate and the difference between them is defined as the estimation error . Therefore, the control law is based on uncertainty estimate rather than the actual value [6], i.e.,
Then, Equation (19) becomes
To develop the adaptive law, the following Lyapunov function is selected;
The time derivative of candidate Lyapunov function can be given as
To enforce the above equation to be negative definite, then the following adaptive law is deduced
The adaptive backstepping control scheme for electronic throttle valve system is sketched in Figure 3.

Considering the error equations of Equations (11)–(17) the sliding surface can be written as [24]: where is a constant. Equation (28) can be rewritten as: Taking the derivative of Equation (28), one can have
The disturbance term is revisited here as which means the disturbance is bounded and to make the scenario more conflictive, the disturbance bound is assumed to be unknown. Hence the adaptive sliding mode backstepping is presented also based on certainty equivalence where an estimate of the disturbance bound is used .
The candidate Lyapunov function is constructed as: where, and . The time derivative of the Lyapunov candidate is:
Equation (31) can be written as,
Based on sliding mode theory, the control action is selected to be composed of two parts as follows: where is the performance part which is given by; where is a design parameter, and the robustness part which is given by
Substituting the control parts and into Equation (33) leads to the following expression:
Equation (36) can be rewritten as
From the fundamentals of linear algebra, the fact of and can be utilized such that Equation (37) becomes
The time derivative of Lyapunov function can be forced to be negative definite by choosing the following adaptive law;
Equation (38) becomes,
This makes converges asymptotically to zero, which means that the state asymptotically tracks the desired trajectory .
The schematic diagram of adaptive sliding mode backstepping controlled throttle valve system is illustrated in Figure 4.

A.J.H. has supervised and examined the dynamic modeling, control design and stability analysis presented by A.H.H. Also, the evaluation of results, drawing of conclusions and text preparation and editing of the paper has been shared by both authors. 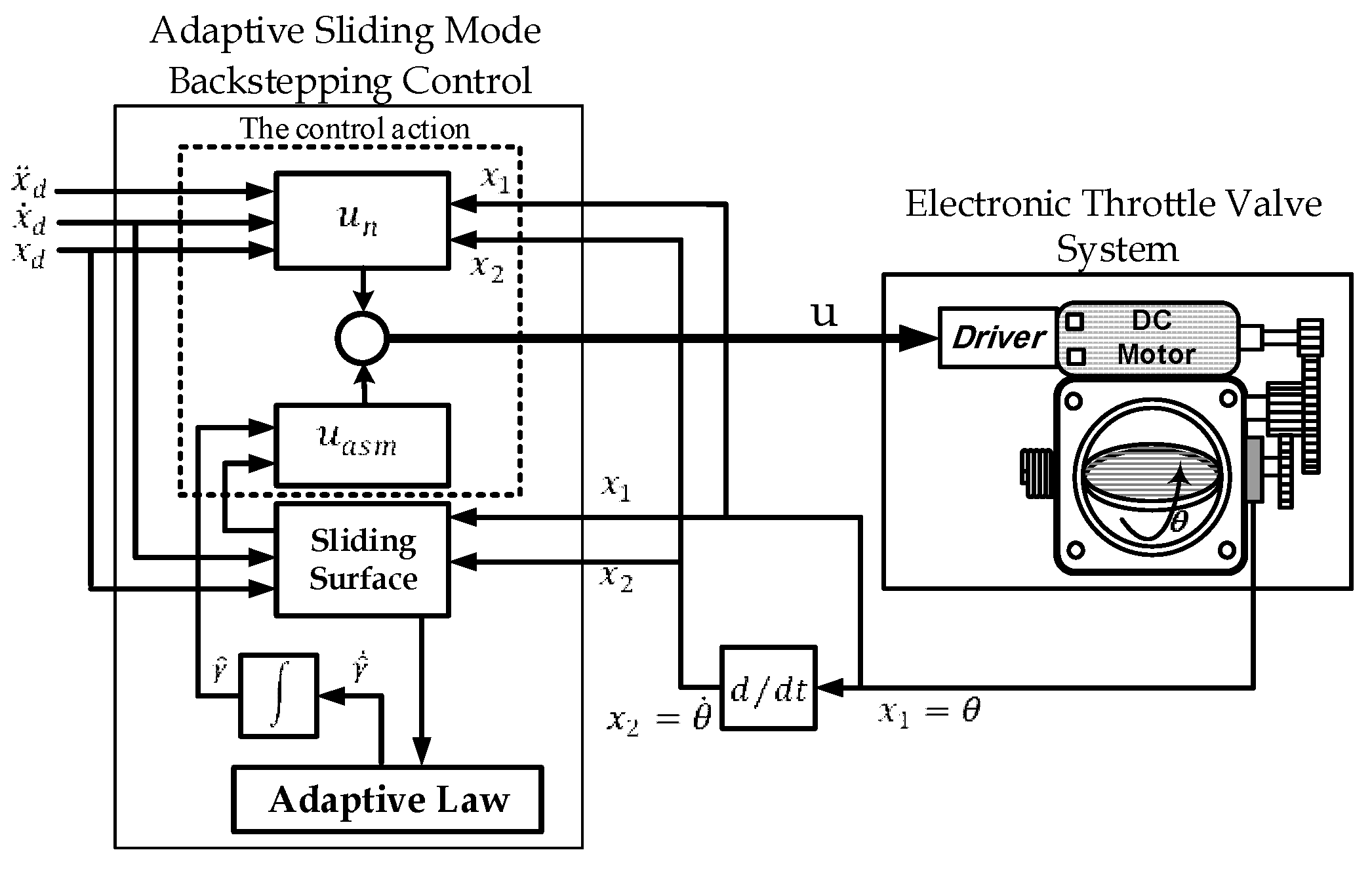